With the help of Lawo, the MLB franchise is forgoing a hybrid approach

After the COVID-19 pandemic delayed the start of the 2020 MLB season, baseball fans in the Lone Star State had to curtail their excitement at watching their Texas Rangers take the field in their new home. After a near four-month wait, the league’s first full-IP control room will be more than ready to go on Opening Day Friday, July 24, when the ballclub hosts the Colorado Rockies at Globe Life Field in Arlington.

“We are deploying an IP-based routing system with Lawo, and it will be one of the first of its kind,” says Chris DeRuyscher, senior director, ballpark entertainment and production, Texas Rangers. “We’ve decided to jump in with both feet, so we’re not a hybrid.” 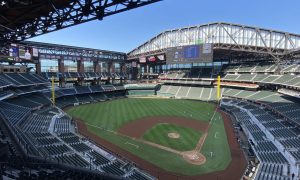 Three years ago, the organization began searching for possible partners for this new endeavor. Over time, the process produced the two vendors chosen to complete the job.

“WJHW was the consultant on the project,” DeRuyscher explains. “They hired Diversified to integrate the control room, which they’ve done a great job with. WJHW put together a great plan, and Diversified did a great job to execute it. We’ve been really thankful for the team that we’ve assembled on this thing.”

Prior to the national sports shutdown, both venues under the Rangers’ jurisdiction were quite busy with activity. Globe Life Park, the franchise’s home from 1994 to 2019, was housing the team for normal operations while the new stadium was under construction. 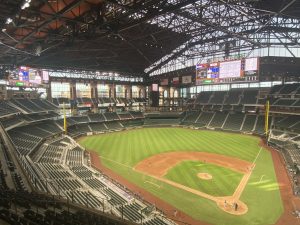 “We were given the best of both worlds,” he says. “We were editing, producing, and doing everything we needed to do [in Globe Life Park] until [the contractors] said, ‘Okay, you guys are good to go to come over here.’ We were truly [operating] between the new and old ballparks because we were going to be jumping back and forth for the foreseeable future.”

Unlike with a majority of one-sport venues, the transition was a bit different because athletic events were being produced in the older venue. Before the XFL dissolved, the team was still going full bore with home games of the then Dallas Renegades. To do this, DeRuyscher split his department into two sections: one spearheading the 1-mile move into their new digs and one holding down the fort.

“We promoted one of my employees, Mandy Lawson, to director of event production,” he says. “She was in charge of all non-Rangers events, which included the XFL and now includes minor-league soccer team FC Dallas, North Texas SC, and concerts.”

The control room for in-venue operations is located beneath the upper deck near the third-base side. Although the full-IP workflow is the headliner in this newly minted space, other elements are also worth considering. 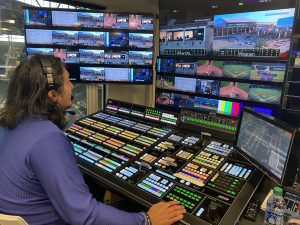 Ross Video’s Acuity production switcher is at the helm of this Lawo IP control room.

Following another trend, the organization is making the leap from HD to HDR and outfitting its production equipment will full-HDR capabilities.

“We went with Daktronics’ new Show Control system, which includes the Camino product,” says DeRuyscher. “This Camino product basically [allows] us to fly through 3D spaces and use [Maxon] Cinema 4D. These will be things that I know our fans have never seen before but also things that some people haven’t seen out in the market in general.”

Below the massive retractable roof, Globe Life Field features LED videoboards in our separate locations. One of the four will look very familiar to anyone who attended games in the previous ballpark.

“We took the left-field videoboard at Globe Life Park [to] be our centerfield out-of-town scoreboard,” says DeRuyscher. “It’s 80 ft. high by 21 ft. wide and is the only thing we’re taking over [to the new stadium]. We put that videoboard in in 2016 so the components are still good.” 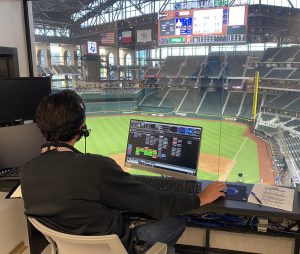 Because of the massive size of the stadium, some fans seated in right field and left field will have an obstructed view of the centerfield board. To solve this issue, a 39- by 110-ft. left-field videoboard and a 57- by 157-ft. right-field videoboard were erected to accommodate every seat in the house.

“At Globe Life Park, we have a giant right-field board,” he notes, “but that board is smaller than our left-field board at Global Life Field, and the videoboard in right field at Globe Life Field is gigantic with a ton of LED. We’ll also have a monstrous ribbon board that runs along our main concourse from foul pole to foul pole.”

This main-concourse ribbon board is 2 ft. by 916 ft., but an entirely new element, a first in professional baseball, can be seen behind the dish.

“We’re going to be the first team in Major League Baseball to have digital home-plate signage,” DeRuyscher explains. “Instead of rotational signs, all of our signage behind home plate is going to be LED that we will control from the control room.”

Season’s Greetings: Rangers to Christen the Stadium Without Fans

Baseball will be played in 2020, but it will be unlike what we’re used to seeing. Instead of a packed house ready to give a hearty welcome to their team, this new stadium will have no crowd. As an alternative, fans will be present as cardboard cutouts, named “DoppelRanger,” behind home plate and the dugouts of each team. Although the first game will be played without the Rangers’ faithful, construction and integration of the brand-new control room is no less impressive. 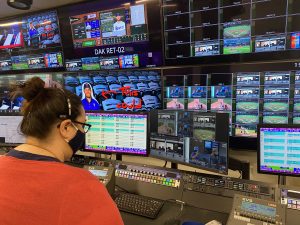 Multiple EVS replay servers are housed in the control room.

When fans eventually get to see this edifice in person, with its blend of uniqueness and high-quality technology, it will become the cornerstone of the Texas Live entertainment district.

“This whole area has been amazing from the get-go,” says DeRuyscher. “It has been successful without the ballpark, but, with the ballpark, it’s going to go to another level since we’re right next to AT&T Stadium. This is going to be a whole new world since we’re going from one way of thinking to the other. I’m really pumped about it.

“There are still some of the old elements there,” he continues, “but, when you combine the audio system with all of the LED video pieces, fans will be blown away by the game-day experience and what we’re able to do. We feel like we’re going to have as good an entertainment-production package as anybody in the world.”

The Texas Rangers welcome the Colorado Rockies to Globe Life Field on Opening Day on Friday, July 24 at 8:05 p.m. ET. The team’s finale to the shortened-MLB season will be against cross-state and division rival Houston Astros, in a four-game series concluding Sunday, Sept. 27.