The 2020 WNBA season is underway and for ESPN and, for the next three months, the production team as well as the teams and league personnel will call Feld Entertainment Studios in Bradenton, FL, home. And for all involved that is just fine. “Everybody is adjusting to the new reality and each of us have our own perspective and background to bring to the situation,” says Jarrett Baker, ESPN, associate manager, remote operations. “But so many folks are happy to be back on site and the team spirit and comradery minimize risks.”

The WNBA returned this past weekend and hopes to be in action for the next three months.

COVID-19 protocols are important and there are two bubbles in place to minimize the risk of infection: a small one with the players, coaches, and select WNBA personnel and then a larger one with the broadcast staff and other support personnel. The Feld Studio houses two courts as well as a significant back-of-house infrastructure that provides ample room for everyone to get to work. Game Creek Video’s Discovery production unit is on site for the ESPN and ABC Sports Broadcasts and Ross Production Services is on hand for the WNBA world feed which is fed to CBS Sports Net and selected RSNs.

“We will continue to produce the WNBA games remotely as we have done previously,” says Baker. “But we will have talent in Bristol as opposed to on site, due to COVID-19.” 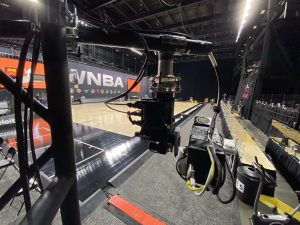 The two courts are 24 feet apart with a double curtain hanging in between. That gives about 12 feet of space courtside for the teams and scorer’s table and everyone at courtside is spaced six feet apart. There are also plexiglass partitions courtside and those have an impact on production. Game coverage is being done with three manned hard cameras and three Fletcher robotic cameras with dedicated operators on each court as well as five Marshall fixed cameras that are replacing handheld cameras and slash position cameras.

“We modified the layout for this season for social distancing,” says Baker. “And there is no good mid-court position so there is a robotic on a 10-foot piece of box truss off the court for the slash position and then the handheld was replaced with two robotic cameras. We can have one set of robotic operators who cover both courts as we can swap control from one court to the next.”

All of the camera and audio signals will be sent to Bristol via satellite and, in a first for WNBA coverage, two different control rooms, one in Bristol and another at ESPN’s facility in Charlotte, will be used. 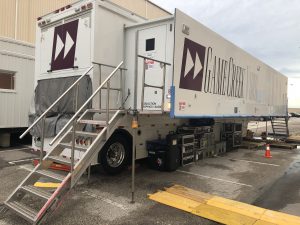 Game Creek Discovery is being used to produce WNBA coverage on ESPN and ABC Sports.

“Typically, we do everything out of Bristol but the large volume of sports being produced out of Bristol means we needed an alternative for a control room,” says Baker. “The video signals will be fed to Charlotte on our ESPN fiber network for the production and then sent back to Bristol.”

Twenty-five people are on site for ESPN and one of the interesting challenges is that reporter Holly Rowe is actually inside the bubble with the players and coaches.

“That adds a bit of a wrinkle on health and safety as we need to get her the equipment without popping the bubble,” says Baker. “We have a few boxes that are in a zone where the players can get access to them and we sanitize RF gear and put it in those boxes so that the players and coaches can take their mics. The jerseys have mics installed and those are sanitized with chemicals and then with UV before the bag that contains them is given a final wipe down.”

How-to videos show the coaches how to clip on the lapel mics and then Facetime can also be used to help them with final prep. 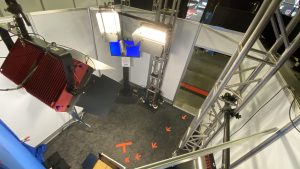 A contactless interview room makes it easy for players and coaches to be interviewed without any human contact.

There is also a contactless interview room with teleconferencing, an ENG camera, and audio and for courtside interviews after the game the robotic cameras and a boom mic are used.

“We’re all curious to see what will hold for the long-term from this situation,” says Baker. “There is a feeling that the growth we have taken here would have taken three or even five years otherwise. It’s been a paradigm shift.”