NHRA roared back on July 10 with the events that not only featured loud cars tearing down the track at upwards of 300 mph but also fans in the stands and fans outside the track as NHRA events are equal parts sports and fan engagement. 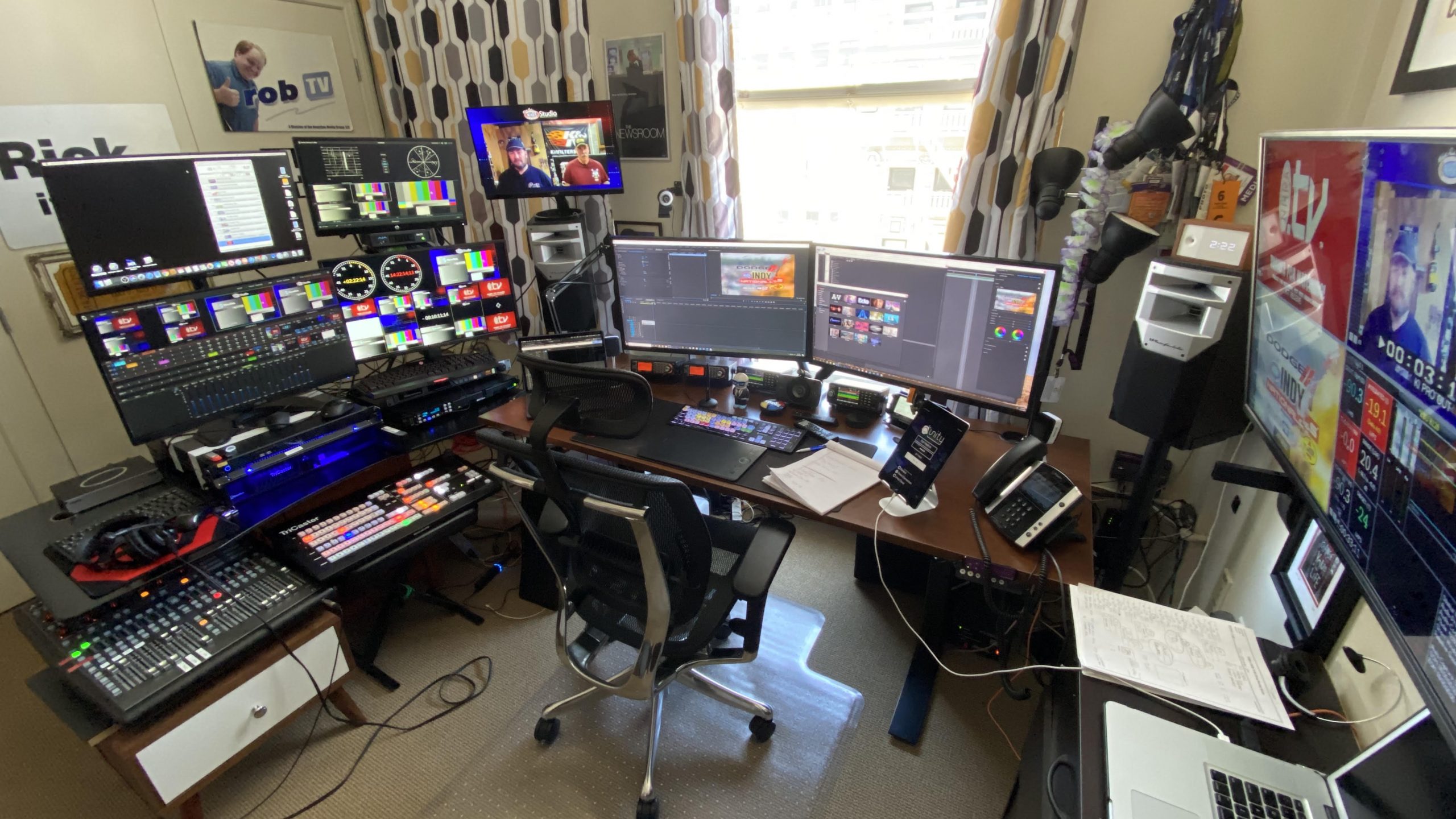 “We’re all pretty excited and have worked diligently over the past few months to develop guidelines for racers, fans, and broadcasters,” says Steve Reintjes, NHRA, VP, broadcasting, says that Game Creek Video’s Nitro A, B, and C units with the A and B unit handling the broadcast show will Nitro C is on site for NHRA.TV which covers all the races from 8 a.m. to 6 p.m.

The team at NHRA worked hand in hand with Game Creek on its social distancing and COVID-19 plans.

“They were really instrumental in helping us and we’ve followed the 12-foot social distancing model with a minimum of six feet in a couple of cases,” he says. “And then we had to take advantage of some of the opportunities [with people working from home] to reimagine workflows and who needs to be on site.”

SMT, for example, used to have multiple people on site for virtual signage.

“We have eliminated one of the SMT staffers and allowed them to work from home, integrated through our AT&T circuit,” he says. “That also gives us more room in the B unit for social distancing.”

Rob Hedrick, NHRA director of post-production and supervising producer, is also working remotely, having set up the equivalent of the NHRA post facilities in Glendora, CA, in his apartment in downtown Los Angeles.

“I give the credit to Mike Rokosa, NHRA, technology executive and also Ken Adelson [formerly of NHRA] who implemented workflows for cloud-based file transfer using Sony Ci,” says Reintjes. “Having those resources during the pandemic was huge for us and opened up the ability to work remotely.”

Hedrick says that one of the first thoughts was to put encoders and decoders in the TV truck but putting in a new IT workflow was something they didn’t want to tackle in the middle of a pandemic. Instead they are relying on a pair of Kiloview E-1 encoders, a pair of Kiloview D300 decoders, a NewTek Tricaster 460, a NewTek Talkshow 4000, and a Behringer X32 audio console with Dante add-on.

“We put a Kiloview encoder at the AT&T office where the baseband SDI signals can be accessed and then an encoder at NHRA’s Glendora office and my apartment so I could access content like I was on the global circuit. Sony Ci pushes everything from the TV truck to the NAS and depending on the speed I can grab raw stuff out of the cloud or record it locally. At the end of the race I can use BeBop and edit in the cloud.”

Hedrick says that one of the most important tools during events is the least sexy: texting as it allows for quick and clear communication (Unity intercom also plays a big part). Daily meetings are also making a difference as everyone can know what is going on. The thing Hedrick misses most is the quick feedback from executives and others as he is editing and working on a project.

Having fans around gives the NHRA events a sense of normalcy although temperature checks, social distancing, masks, hand sanitizers, and other protocols are strictly enforced. A day at NHRA can feel more like being at a state fair with the garages for each team standing in for the various farm exhibits.

“Teams would have out pre-signed player cards as we didn’t have our usual autograph signings and other interaction,” says Reintjes.

From a production standpoint the biggest change occurred at the finish line where, historically, a reporter would interview the drivers with a handheld cameraman.

“We now have a second jib camera so that the reporters can stay distanced and the crane dips down in front of the driver with a microphone off of the jib and a second mic on the BSI set up,” says Reintjes.

Reintjes says he and the team are thankful that everyone has bought into the guidelines although those are a moving target given the differences in local and state guidelines.

“We work hand in hand with the states to assess where they are and we are hopeful we can continue to increase fan attendance while sticking to whatever guidelines are in place,” he says. “But it’s been great to see our leadership team roll through multiple scenarios on a weekly if not daily basis. They allowed us to get back to racing even though it hasn’t been without its challenges.”