Broadcasts will feature a combination of real and ‘enhanced’ audio

Every sport is finding its own way back on the air, and, when the NHL returns this weekend for the start of its abbreviated-but-rapid-fire 2020 Stanley Cup Qualifiers series — 16 teams playing best-of-five series to determine the eight teams to advance to the 2020 Stanley Cup Playoffs — it’ll be with the classic sound elements of blades, sticks, and pucks on ice.

Games will originate from just two venues: the Toronto Maple Leafs’ Scotiabank Arena, where NEP’s ND6 truck is the nexus of hockey on NBC, and the Edmonton Oilers’ Rogers Place arena, where Dome Productions mobile production units are managing the games for Rogers SportsNet. Both locations are contracted by NHL through NBC — as are their respective A1s Tim Dunn and Patrick Castonguay — to do the world feed, from which NBC Sports will take the stems.

NBC Sports will backhaul its elements to NBC Sports’ Stamford, CT, studios. The Stamford submix of all the elements — including venue, remote, and home-based announcers — is done by Rick Bernier, with Mike DiCrescenzo mixing the intermission studio segments, and is distributed via a world-feed model, similar to how the network handles its Olympics broadcasts.

A Special Category of Mixer

The sonic signature for hockey’s pandemic era is evolving. This season will feature what is emerging as a new category of audio submixer for television sports: the A1 tasked with mixing “enhanced sound” — a euphemism for the artificial crowd and effects noises that some consider necessitated by venue seats kept empty by the COVID-19 outbreak. These new specialists are mixing audio elements, often assembled by videogame developers from actual games played in teams’ own venues, into a menu of crowd reactions to sprinkle throughout the games. The goal is to re-create the sound of a full stadium or arena from the Before Times, when coronaviruses were phenomena that happened elsewhere or in thriller novels. 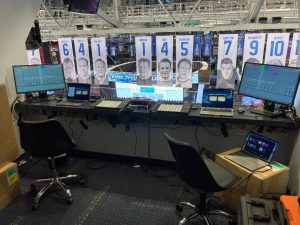 “It’s a very specialized position,” notes Karl Malone, audio and audio systems engineering designer, NBC Sports and Olympics. “It takes someone who really knows the sport and the teams and the way their fans react. Especially for NHL, they have to be able to follow a very fast game and know its nuances.”

He says that describes Matt Coppedge, who has mixed hockey and other broadcast sports as an A1 for NBC Sports. For this series, he will work a pair of Ableton Live audio-software systems (one main, one backup) on Apple laptops that hold several gigabytes of sound effects from the EA Sports libraries, recorded in all the NHL arenas for videogames, such as EA’s NHL 20. The inventory includes two separate crowd-sound beds and an array of reaction sounds, such as oohs and boos, as well as team-specific cheers and chants.

“As a hockey player and fan, I can’t think of a cooler gig than mixing live crowd ambience for the 2020 NHL Playoffs,” says Coppedge, noting that both NBC and NHL production teams have dropped in to offer suggestions to guide the crowd mix. “Re-creating a live sports crowd for any sport is a big challenge. That challenge is magnified when you try to replicate passionate fans for one of the fastest sports in the world.”

He is mixing through Ableton’s Push 2 control surface, which assembles the various audio elements into a menu, with certain elements hot-keyed for quick access. His counterpart in Edmonton, Jeff Kozak, is using the same EA Sports system and audio elements.

“Using the Push 2 allowed for a very natural workflow and quick access to every sample in the session,” Coppedge says. “After a few level and key adjustments within Ableton, the project is ready for the puck to drop.”

Working with a front-row view of the action from the media gondola at Scotiabank Arena lets him follow the action and react to the game much like a regular NHL crowd would.

“After a few periods,” he explains, “creating the natural ebb and flow of a live crowd began to feel very comfortable. The only thing missing was a hot dog and the kiss cam!”

Malone says that, although there had been talk of wiring several players per game for sound, as is done routinely during regular-season play, the league had decided against it for the COVID-shortened season. That may be just as well. The Ross AirCleaner profanity-elimination delay device being used this year smoothly diffuses the sounds of profanities, instead of covering them jarring bleeps. It was getting a workout, with the broadcast feed experiencing as many as 50 “garbles” per game and the clean feed without announcers getting as many as 90.

NBC Will Ease Into Use of Fake Crowd Sound

The faux crowd audio is an experiment for now, being evaluated during the preseason games. How and how much it will be applied on-air will be determined by the league as play progresses. When it is, it will be mixed with the audio from the network’s announcers and the effects microphones surrounding the rink, including as many as a dozen Crown PCC160 boundary microphones that Malone says are the best at capturing the key analog effects of hockey: blades, sticks, and pucks on the ice.

None of that will be pumped through the venue PA system, as some other sports are doing. Instead, the NHL venue PA systems will carry music, as well as the goal and period-end horns and buzzers. The network broadcast will come with actual field-of-play effects and announcers’ commentary, and any enhanced sound that may eventually be added. However, viewers of NBC Sports digital channels may have the option of hearing only the “real” effects gathered in the venue, without the enhanced crowd sounds.

Interestingly, Malone’s conversations with NHL players indicate that they seem to enjoy the ambience of the arenas even without an audience.

“They said it reminds them of a Winter Classic,” he says, referring to the annual January hockey game played in an NFL stadium. “With those, the crowds tend to be relatively far away, and you don’t hear them on the ice outside as intensely as you do indoors.”

This first round of NHL action will be a proving ground for how enhanced audio for the sport on television might be most effectively used. Malone says it will be eased in with a light touch early on, when it’s used at all, and that use will be determined by the league and the network. (Sam Flood, executive producer/president, production, NBC Sports, said, during a media call, that the network will likely start off by using just the natural sound in the arena.)

Like many if not most audio pros in broadcast sports, Malone’s preference is for the unadulterated natural sound of the venue and the game, which he says sounds “atmospheric and fantastic” as it is, especially in the surround channels. However, he’s also aware of the potential power of enhanced sound for games during the pandemic.

“People want a sense of normality, that’s understandable,” he says. “We can do that.”