Last September, when gaming-industry stalwarts Ariel Horn and Ben Kusin announced VENN (the Video Game Entertainment and News Network), they laid out an aggressive timeline to launch the 24/7 gaming, esports, and entertainment network in the third quarter of this year. However, when videogame play and esports viewership began to skyrocket during quarantine, VENN’s launch date was moved up three months to capitalize on this growing number of eyeballs. Today, the network launches with 21 hours of original programming per week and big plans for the future. 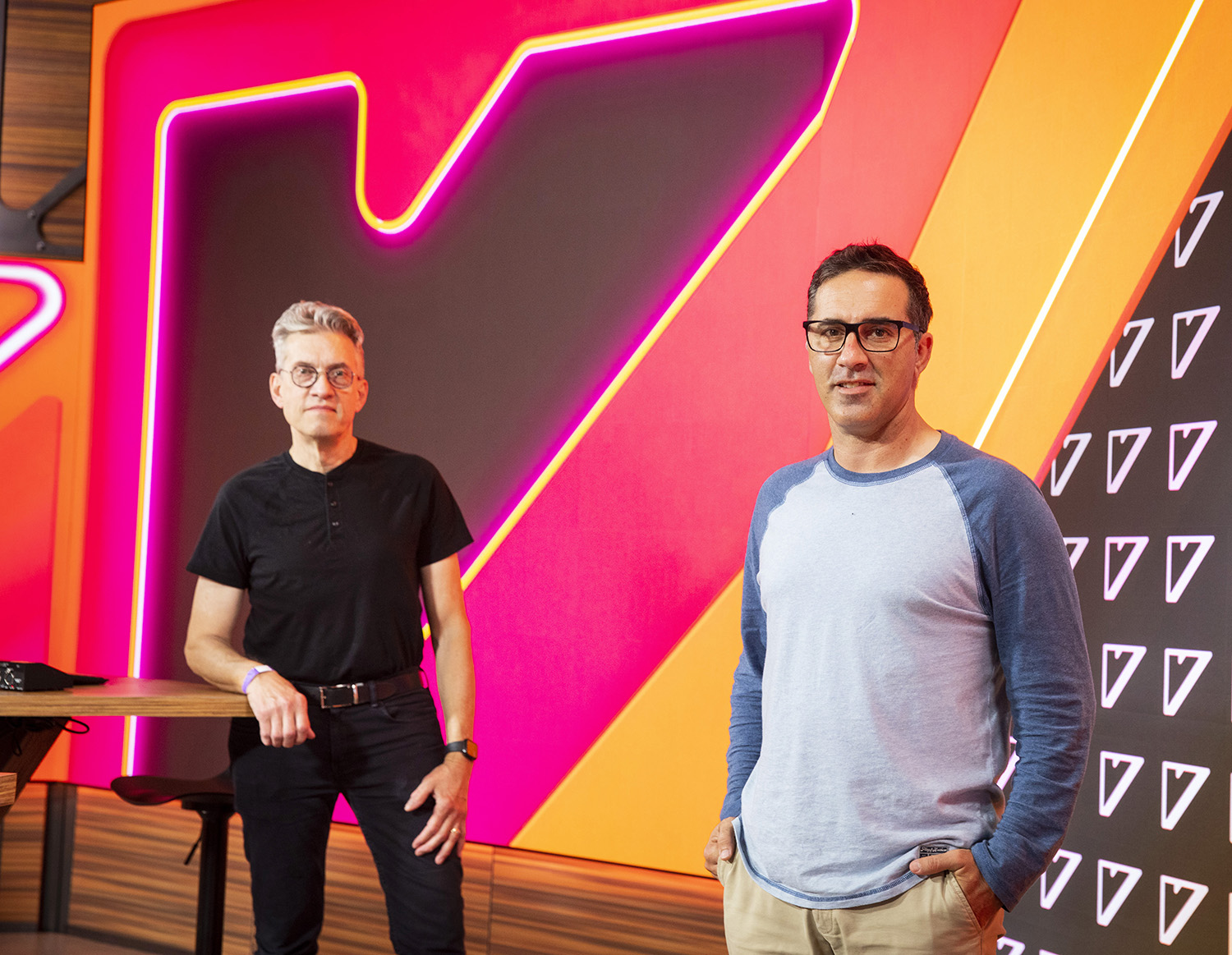 Despite one of the most aggressive network-launch timelines in recent memory, CTO Scott Gillies and SVP, Real Estate and Facilities, James Lee were able essentially to create a 24/7 linear-network operation from scratch at Vista Studios in Los Angeles in a matter of months.

“I’ve been building broadcast facilities for 30 years,” says Lee, “and I’ve never seen a full network launched as quickly as we’re launching. But it certainly doesn’t look like it was just cranked out; it looks as good as the best [original programming] out there right now. I think, when people turn this on, they are going to be blown away. There’s no one out there that’s putting out the kind of content out that we’re going to be putting out.”

From NYC to L.A.: How VENN Pivoted Its Plans on the Fly 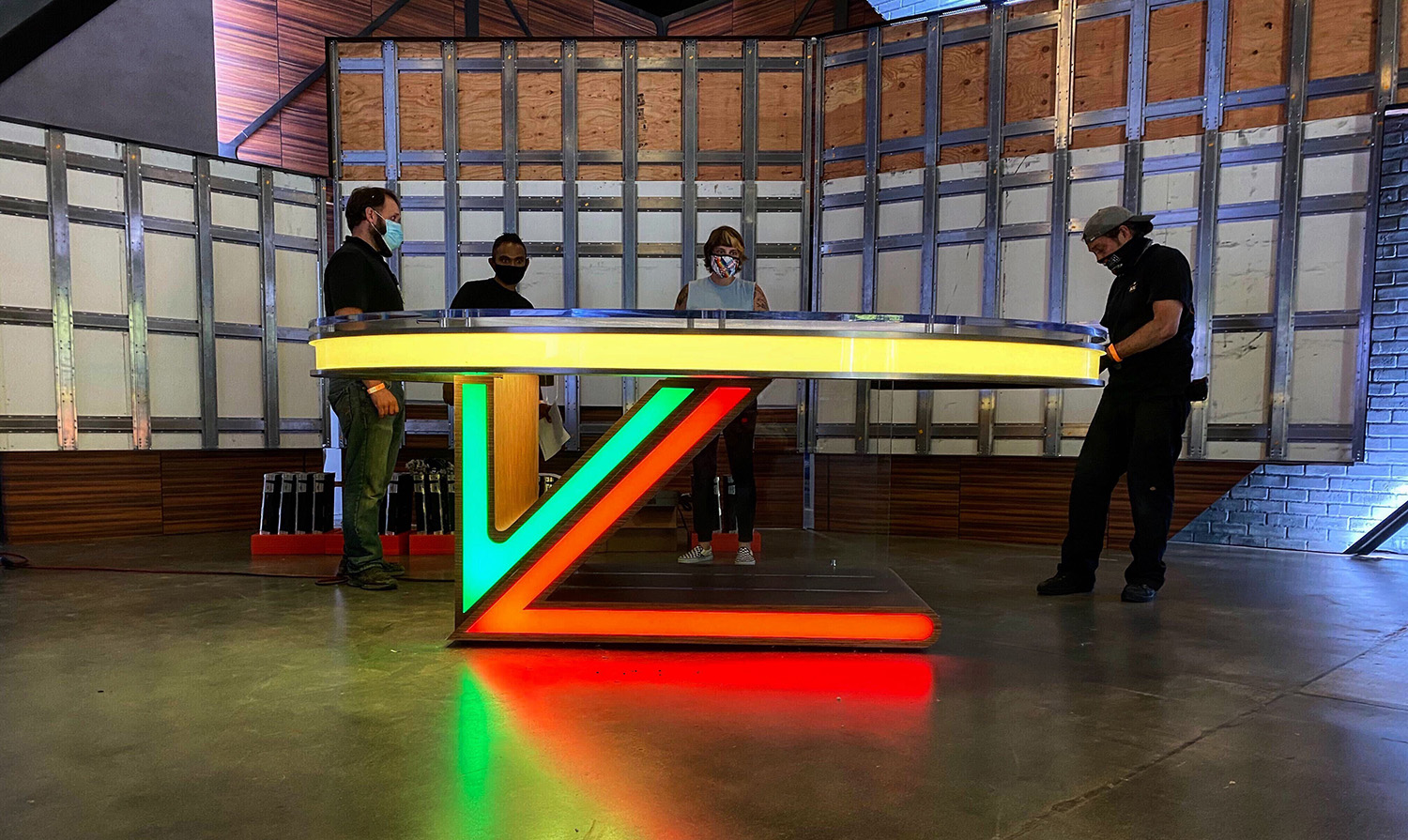 The VENN studio at Vista Studios came together in a matter of months.

When Lee joined the company in November 2019, VENN planned to launch dual live studios in New York and Los Angeles, with New York serving as the flagship location and content-production hub. His team secured an 11,000-sq.-ft. footprint on the second floor of 3 World Trade Center, where VENN planned to build a state-of-the-art, IP-based 4K production facility geared toward gaming and esports-centric content. However, just two weeks before construction on the new studios was to have started, New York City was shut down by the pandemic.

“We had to put that on hold,” says Lee, “and everyone moved into work-from-home mode and started to try to figure out how we were going to move forward.”

Not to be deterred, he and Gillies had already set their sights on building a smaller, talk-show studio at Vista Studios in Playa Vista, Los Angeles, in addition to the NYC facility. With the 3 World Trade Center studio on hold, they shifted their focus west. 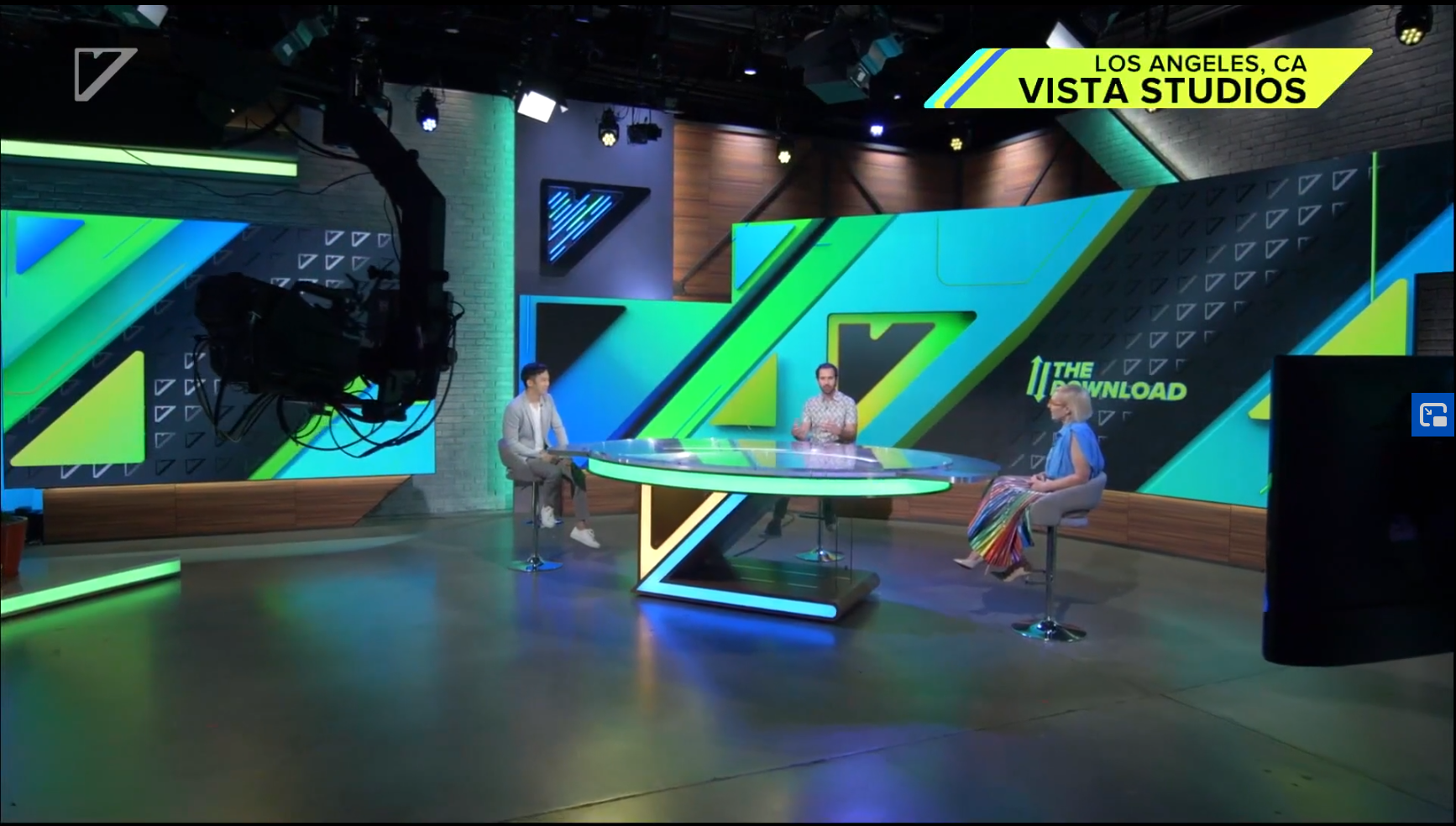 “The plan originally was to launch in L.A. and New York at the same time — and then COVID hit,” says Gillies. “Fortuitously, James and I had already come out to Vista Studios, where we were looking for a smaller studio space here in town. It really became clear that this was far away the best facility on the west side of L.A. — an unbelievable location, amazing stage footprint, and great infrastructure and technology.”

With plans to move ahead with an initial launch out of Vista Studios in place, VENN announced in early March that it would be moving up its debut from the fall to July to reach the growing audience for gaming and esports content during the pandemic.

“Ariel and Ben had the vision of pivoting the whole [operation] and launching a beta version [of the network] out of L.A. so we could turn this on as quickly as possible,” says Lee. “We pretty much did everything to make that happen between mid April and now. It was an insanely fast timeline.”

Vista Studios, which opened in 2017, was already well-equipped for VENN’s needs with the latest technology and a sprawling footprint. Vista has a total of four stages onsite, and VENN has taken over the largest: a 6,000-sq.-ft. studio with a 19-ft. lighting grid, an elephant-door truck bay for easy load-in, and a dedicated production-control room (PCR).

“Originally, we wanted to do a fully 4K, IP plant, and that’s still our plan for New York,” says Gillies. “This [Vista] plant is capable of 4K, but, in order to get things rolling as quickly as possible, we opted to launch at 60p (59.94). Thankfully, they have a 3G-capable router and very capable switcher, so we were able to move forward with that right away.”

VENN’s Studio One at Vista has been outfitted with more than 1,000 sq. ft. and 30 million pixels of LED walls, as well as floors composed of D3 NVIEW UHD 1.5 million-pixel–pitch panels. Designed by Devlin Design Group, the studio was designed to be ultra-flexible to accommodate a mix of talk shows, news shows, game shows, and variety shows, as well as live music performances in the same footprint.

“From day one, we knew we wanted as much LED as possible because we need to have as flexible a space as possible,” says Lee. “We can change from a news set to a five-person gaming set in a matter of half an hour. So, when you’re looking at the Grey Area, which is a talk show, versus The Download, which is more of a news show, they will actually be in the same exact spot, but you will never know it’s the same studio.” 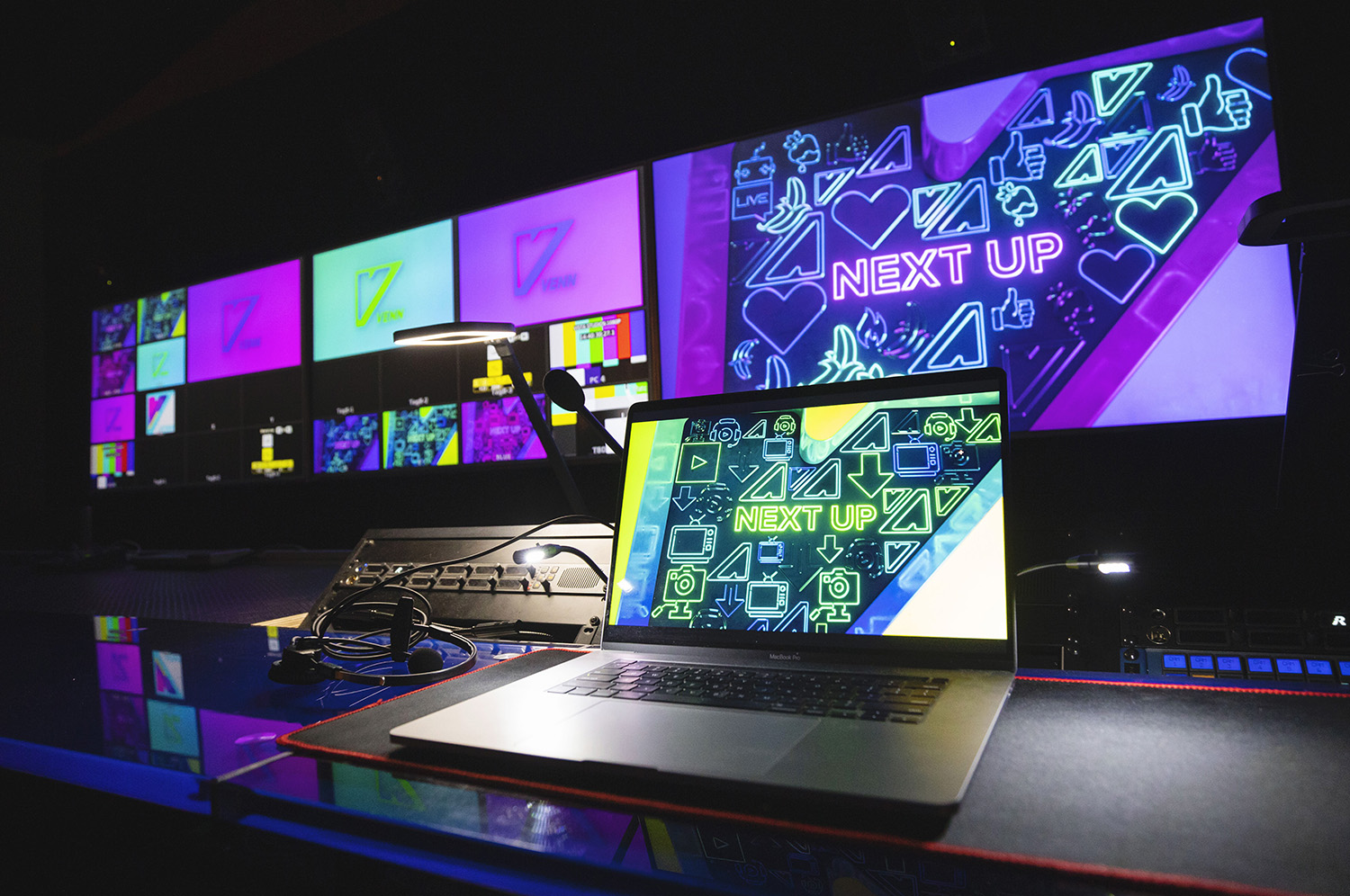 Inside the VENN’s control room in L.A.

Although VENN made some adjustments and additions to the equipment complement, the studio largely deploys the technology already integrated by Vista Studios. This includes Ikegami cameras, a Grass Valley Kahuna production switcher and Sirius video router, and Evertz DreamCatcher replay. Gillies and company also upgraded the audio system to a new Calrec audio console and router to handle the increased number of sources that VENN productions will require. Other key gear includes Sony remote cameras and Cobalt Digital SCTE processing.

“Since Vista was built so recently, it really has the latest technology — like the 3G router and 4K-capable [equipment] — across the board,” says Gillies. “That’s a huge advantage. It didn’t take a lot of engineering on our part to get that [main studio] ready to go. Of course, we’ve added on a lot more to meet our requirements since we are a live 24/7 network, but it was really ready to go, for the most part.” 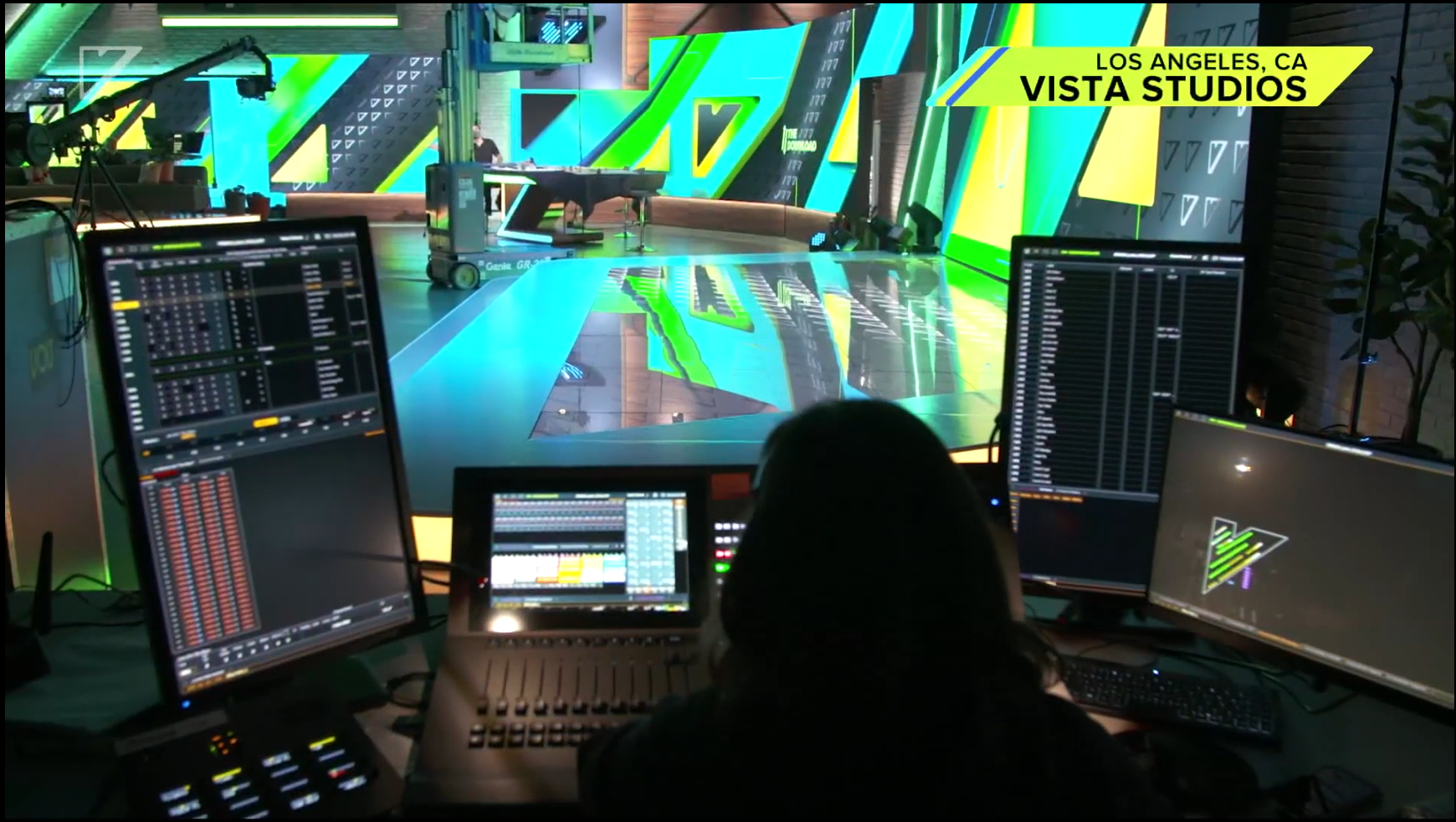 VENN will also rely heavily on remote contributors, integrating streamers and remotely created content from around the world into its programming. With that in mind, VENN is relying on Blackbird’s cloud video-editing/publishing platform for remote production, as well as Medialooks Video Transport for remote guest contribution and Mobile Viewpoint for remote talent. VENN has also brought in Vimond Media Solutions’ video-content–management solution to handle ingest, media management, and curation.

Vista Studios also had a robust UPS (uninterruptible power system) running at only 22% capacity, so VENN has opted to connect its entire operation to this system for power redundancy.

Vista has worked closely with Lyon Video on the overall production-facility design and Advanced System Group (ASG) on the broadcast- and IT-equipment side. 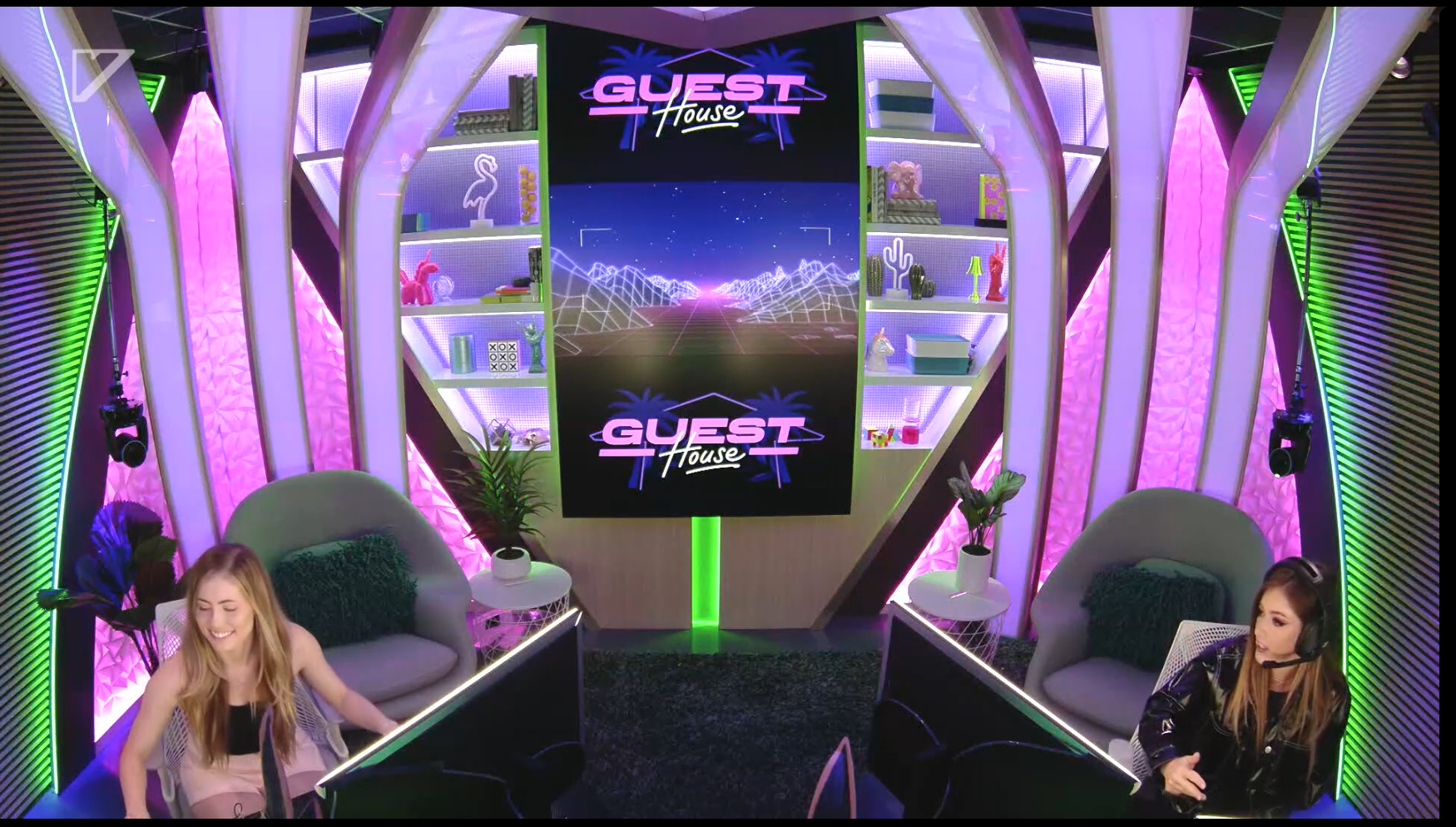 Guest House on VENN is being produced inside Studio 1B.

In addition to the main studio, VENN was looking to create a small secondary studio that could serve as the “ultimate streamer’s den,” as Gillies puts it. VENN Studio & Technology Management team worked with Vista to transform an existing office into this Studio 1B and an auxiliary space into a second control room.

In terms of backend infrastructure, the main studio was largely ready to go when VENN arrived, but the Studio 1B facilities had to be built from scratch. Considering that VENN plans to continue to use the L.A. facility even after its IP-based New York facility launches, Gillies opted to build this secondary studio on top of an NDI IP backbone and used largely NewTek equipment, including PTZs and a TriCaster TC1 (with the new TC2 to be installed soon).

“Because we want to go IP in the long term, we went with NDI backbone,” he says. “That will allow us to easily transition what we’re building now into the IP world without having to go backwards.”

Facility Design in the Age of COVID: Safety Comes First 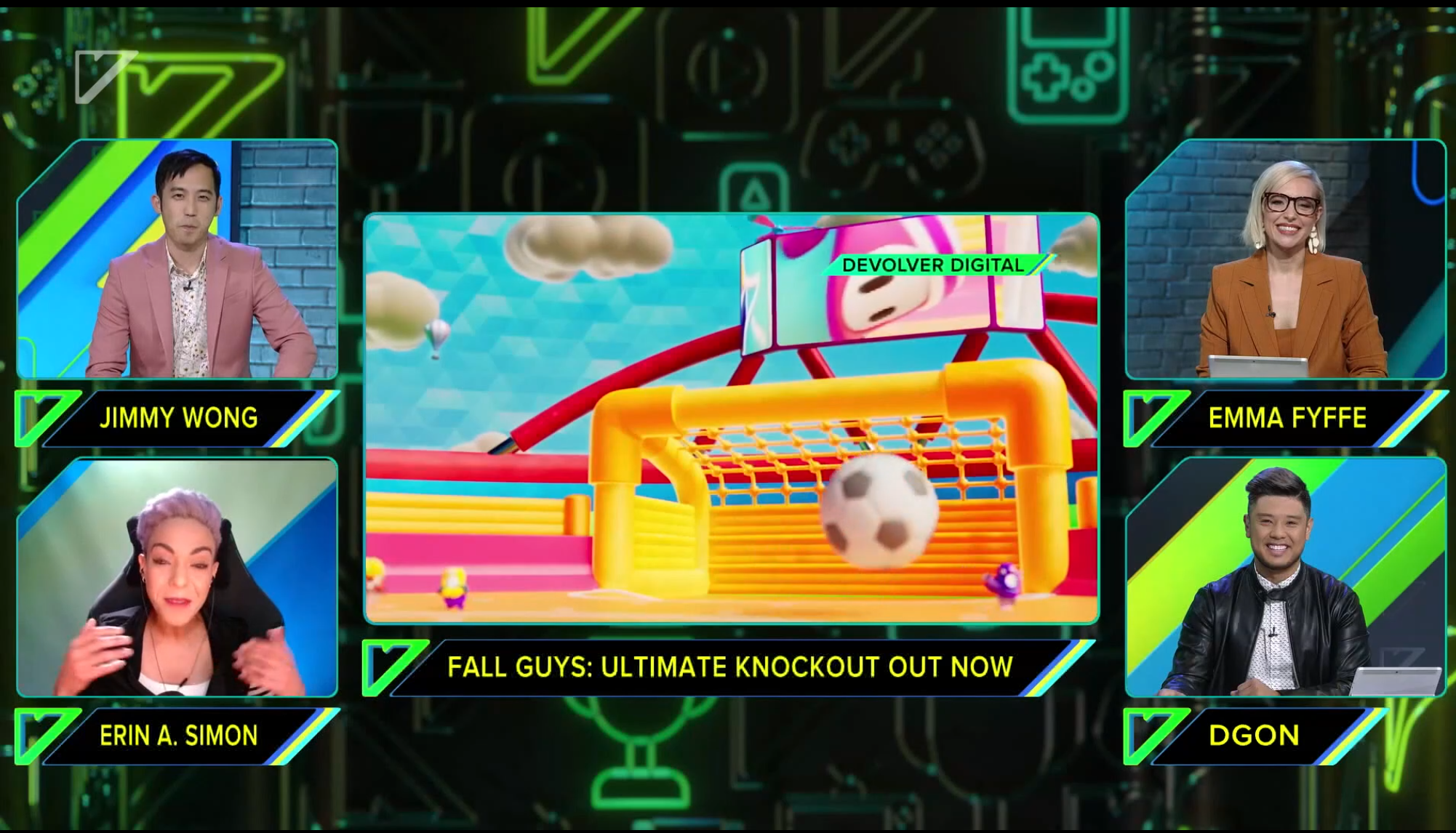 VENN will regularly integrate remote contributors into its studio shows

One of the first — if not the only — new network facility to launch during the pandemic, VENN had to drastically rethink the way studios and control rooms were laid out, to ensure social distancing.

Venn’s main PCR at Vista originally featured a three-bench layout accommodating as many as 20 crew members. To meet safety protocols, the third bench has been removed, and the middle bench has been moved to the back of the room. In addition, the front bench now seats three, having previously seated five or six; the rear bench, four versus seven or eight. There is also one designated standing position near the door, but no other individuals are allowed to enter the PCR. 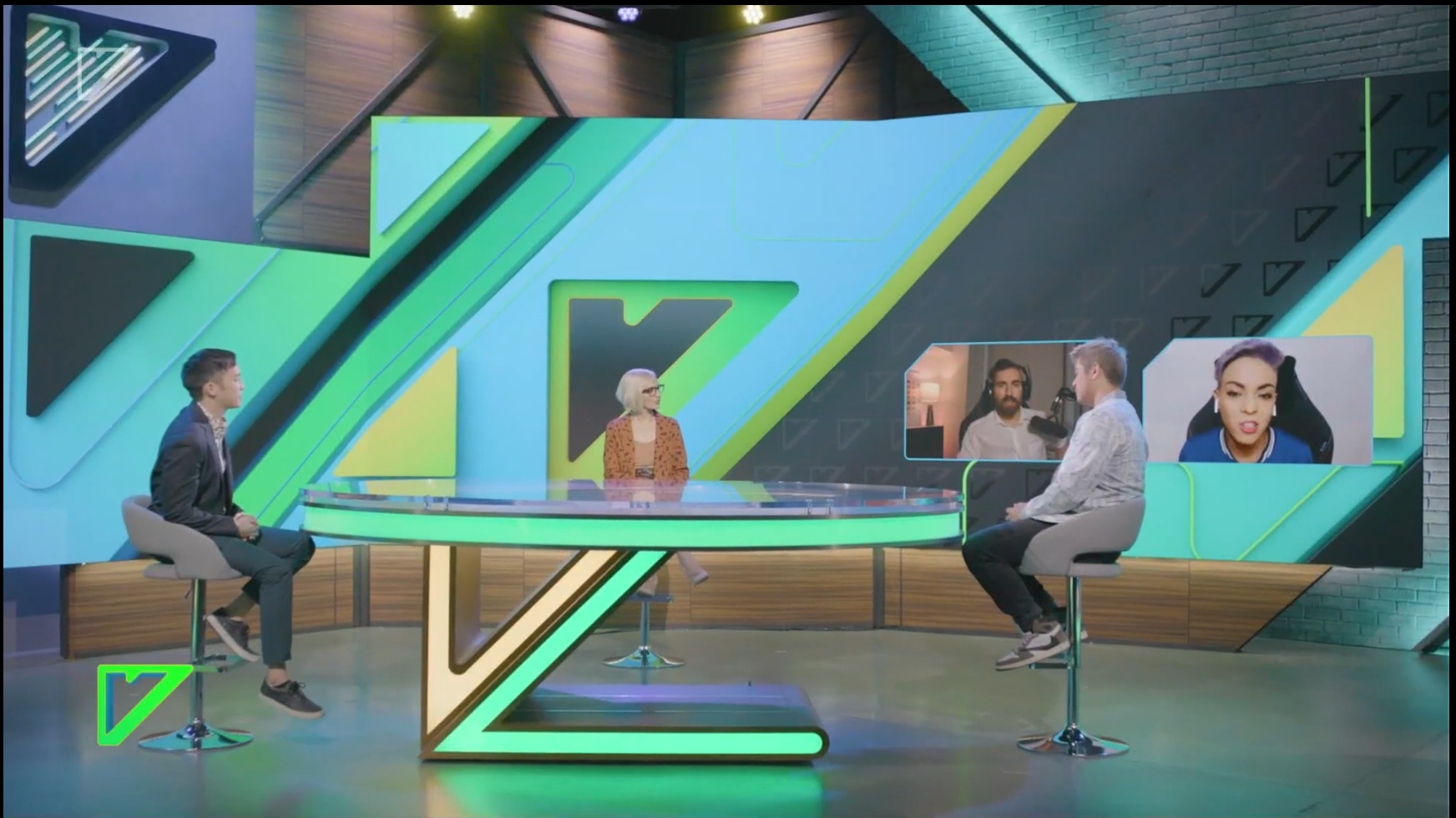 In addition to being 6 ft. apart, every position is now separated by a plexiglass partition, and all crew members are required to wear masks at all times. A strict sanitization process has also been put in place, and an extra half hour of transition time has been built in between shows to allow the studio and control room to be thoroughly cleaned as crews shift in and out.

The entire staff is given a COVID-19 test each Friday with a 24-hour turnaround, so that staffers receive results before they return on Monday.

“We’ve had over 500 tests here in the last three weeks,” says Lee. “Fortunately, we’ve had zero positive tests so far, but we have [protocols] in place in case that happens. Everyone’s top priority is the health and safety of the staff.”

Looking Ahead: NYC Studio Still on the Horizon;  IP, 4K on Tech Roadmap 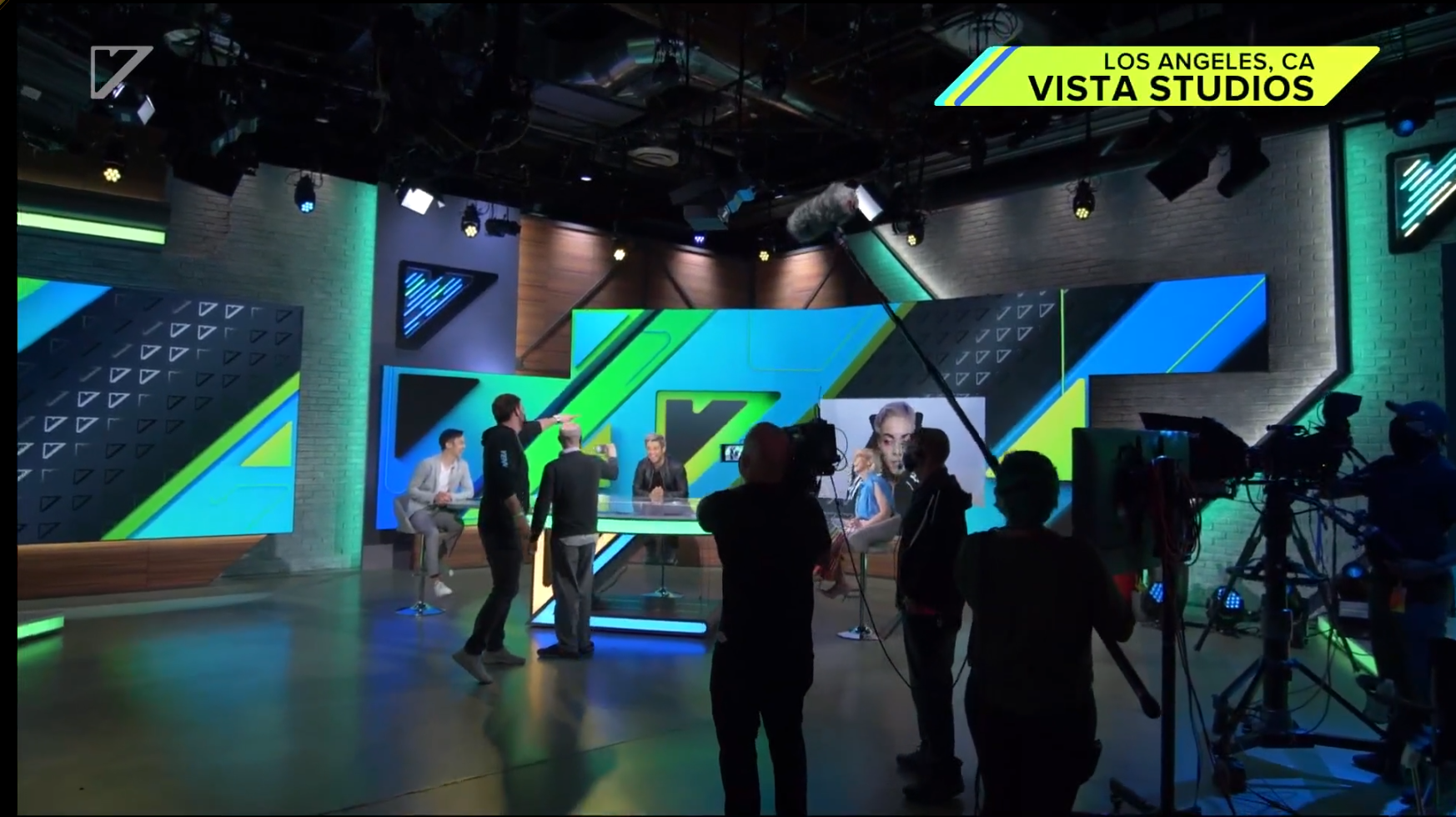 Behind the scenes of The Download news show on VENN

With the network off the ground and the L.A. studio now live, Gillies and Lee will soon turn their attention back to New York. The long-term goal is to unify both the L.A. and the New York facilities via fiber to allow the two operations to seamlessly share content and transmit signals back and forth. Lee describes the World Trade Center studio as a public-facing facility that will include audiences for shows and a “PC bang” LAN gaming center for the gaming community to congregate.

“It’s a completely different build [from L.A.],” he says. “We don’t know when we’ll be able to have audiences, but we’re very excited about it once that becomes possible.”

The New York studio will be a fully 4K production facility based on the SMPTE ST 2110 suite of IP standards. By going with an IP backbone, Gillies says, VENN can embrace the consumer-technology and PC-based workflows widely used by gamers today. With remote contributors and live-streamers playing a crucial role in VENN’s content, VENN will be able to seamlessly ingest a variety of internet-based feeds into its broadcast facility. 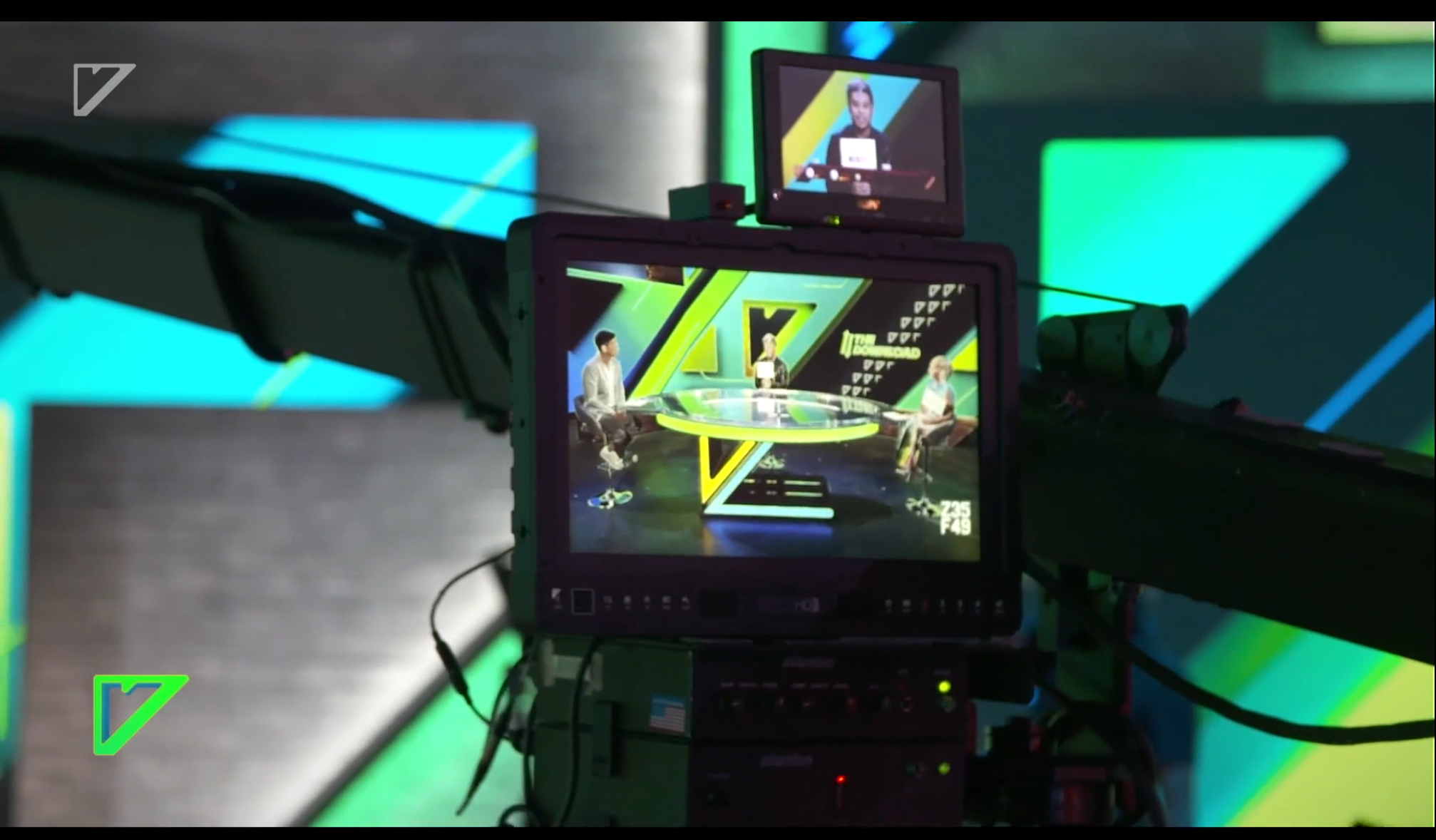 “We know we want to do 2110 IP,” says Gilles. “We’re already in the late stages of design and working with a few manufacturers on their IP systems. So we’ll be ready when the time comes. Going IP really opens us up to gamer workflows: SRT, OBS, and things like that. Gamers are very tech-savvy, so they are able to remotely contribute in ways that news reporters and broadcasters are just now discovering. We have to be ready to take in those feeds, and IP will allow us to do that.”

“In this business, we’ve all done projects where you have to bring something together quickly,” Gillies notes, “but to do it in the isolation of the pandemic that we are dealing with is unbelievable. Honestly, if you asked me to bet on it six months ago, I would not have thought we would have gotten to where are now this quickly. We’ve somehow made it happen by sheer will, good fortune, and making the right safe decisions. There has been lot of long days to get here, but it’s unbelievable that something that was in all of our brains has come to fruition in just a few months.”