The concept of fake crowd noise emanated from this stadium

At one full month into the 2020 MLB season, the immense technological progress that has been made is the result of an arduous planning process. Ideas like fake crowd noise were developed prior to the season’s beginning, and Chase Field, home to the Arizona Diamondbacks, was first to experiment with these new workflows.

“Before the regular season started, we were contacted by Major League Baseball to see if we would be the venue to test out crowd sound and virtual fans for the national games on Fox,” says Rob Weinheimer, VP, DBTV Productions and Game Operations, Arizona Diamondbacks. “For a week, the league came into our ballpark and experimented with various systems that are being used throughout all of the stadiums.” 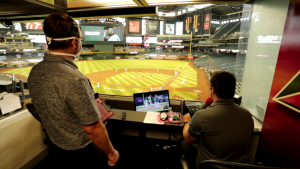 Fake crowd noise has become commonplace within all 30 ballparks, but not many could say that a majority of the prepackaged sounds on an iPad supplied by MLB were recorded from the Diamondbacks’ fanbase. In Weinheimer’s case, he has some bragging rights over others in the industry.

“The iPad has a very nice user interface and is loaded with sound effects,” he says. “These sound effects are originally from the videogame MLB The Show, and I learned that the majority of the sounds were recorded at our stadium during the 2017 season. It might be the only stadium that has our actual fans cheering, which is pretty cool.”

A lot has changed at Chase Field: workers are subject to temperature checks and COVID-19 questionnaires before arriving and when entering the building, the tiering system is still blocking crews from certain areas (Weinheimer and other staffers work from home on non-game days), and safety protocols have affected the layout of the control room. Even with all these differences, the utter silence without fans is one of the biggest that both players and in-venue teams are dealing with.

“One of the two main goals that I want to achieve this season is re-creating an atmosphere for the players and coaches on the field that resembles a [live] game,” says Weinheimer. “When we spoke with the players and asked them what the strangest thing about the season will be, they didn’t say the COVID-19 changes or the shortened season but playing without fans. The players want more energy, so we’ve tried to make [the ballpark] more electric than we had originally planned.”

Like the Tampa Bay Rays’ Tropicana Field, Chase Field is an enclosed dome. With that in mind, the physical structure of the building is a factor in the pushing out proper audio levels.

“All I can do is try to make it sound good in the ballpark,” he says. “It’s up to the broadcaster [Fox Sports Arizona] and specifically their audio crew to take what I’m putting out there for their effects mics and set the level that accommodates the people at home.” 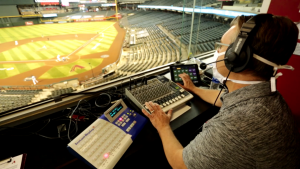 Inside a domed stadium, producing crowd noise is about finding the sweet spot for both the players and the fans watching at home.

Having the responsibility of producing fake crowd noise has almost become an entirely separate show that needs to be produced. When visual elements come into the mix, DBTV Productions is still doing its best to iron out any issues by communicating openly with colleagues.

“I’ve approached anybody and everybody for help and feedback,” says Weinheimer, “but it’s tough because every ballpark is different in terms of their shape, audio system, and where the speakers are facing. We’ve changed a lot since the first time we used the crowd noise. For example, we have these monstrous speakers out in centerfield that provide the sound for the whole bowl, but I’m not using those speakers for crowd sound. I’m using my field speakers around the bowl to try to make it sound like the sound is coming from the crowd.”

With more information and advice, the production can become even better. It’s ever-changing and a continuous work-in-progress, and the whole crew understands that Opening Day and the final game of the year may look drastically different.

“We knew going into the season that it was going to be trial and error all of the way through,” he adds. “I’m sure that my show at the end of September is going to be different than how my show looks now.” 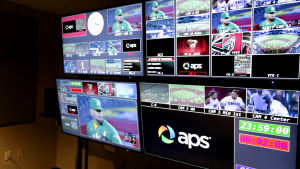 A look inside the DBTV Productions control room at Chase Field

As with any team in professional sports, it takes more than one individual to accomplish a common goal. The same could be said about in-venue teams as well: every crew member needs to pull in the same direction in the name of putting on a great videoboard show. While Weinheimer is one of the leaders in the clubhouse, the backing and passion of his team raises the production bar each and every game.

“One of my favorite things about my job and working in this industry is that we can’t accomplish anything by ourselves,” he says. “Each of us has a hand in what’s going on, and I couldn’t be prouder of the crew that we have because our communication is better than ever. And no one’s complaining about what we’re doing.”

Besides being proud of his team, Weinheimer is rolling with the logistical punches that this season brings, turning them into new opportunities.

“This is a historic year, and we’re probably never going to see anything quite like this again,” he observes. “We’ve decided to take [this season] as an opportunity to do what we can to be a shining light for our fans and to the whole sport of baseball by saying, ‘We’re still here, we’re still doing our jobs, and we’re going to stay safe.’”

The Arizona Diamondbacks continue their four-game set with the Colorado Rockies at Chase Field tonight at 9:40 p.m. ET before welcoming the San Francisco Giants to Phoenix for three games starting on Friday, Aug. 28 at 9:40 p.m. ET.