Thanks to ‘audio sweeteners,’ faux crowd sounds reflect the emotion of the game

As sports restart under the COVID-19 pandemic, they’re doing so largely without any fans in the stands. But there is still plenty of cheering and other sound from home-team boosters, virtual as it may be, and that’s thanks to an elaborate concatenation of technologies and fingers emulating the noises that would have been supplied by those missing crowds.

At the center of this novel arrangement are the “audio sweeteners,” teams of audio mixers who interpret the range of game emotions encapsulated in hundreds of audio files and folders containing digital samples of home-arena crowd sounds, provided by a combination of the teams themselves and sports’ videogame versions.

These audio sweeteners — a generic term for sound mixers who add prerecorded sounds in film and television postproduction — are new in broadcast sports production, a response to the COVID-19 shutdown. However, they’ve dubbed themselves “the weathermen,” according to “lead weatherman” David Crawford, senior audio designer, Firehouse Productions, which the NBA hired to develop and run the crowd-sound operation. One of eight operators, divided into four two-person teams ensconced in the NBA’s “bubble” in the Wide World of Sports (WWoS) complex in Orlando for the season, he explains that the term reflects the fact that nothing in the game — and thus its sonic response — is predictable. 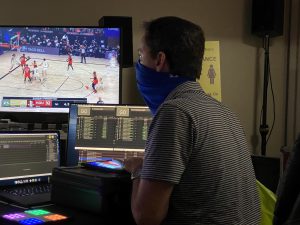 Firehouse Productions’ Nathan Allers is one of the audio “sweeteners” for the NBA games at the Wide World of Sports complex.

“We’re like the weatherman,” he says. “We have the best tools, but we still can’t always predict how anything is going to turn out.”

Tools of the Trade

Their tools are a pair of Novation Launchpad controllers (otherwise used most often in conjunction with Ableton Live music-production software) and an Apple MacBook Pro running QLab 4.6 software, connected to the DiGiCo SD7 front-of-house consoles via Dante networking. Each of the three basketball courts in the WWoS complex has its own “weather room” — an aerie from which two A1s assigned to the audio-sweetening tasks look down on the court to keep a close eye on the action.

Using the Launchpad’s 64 buttons, which correlate to a range of crowd sounds and their volume and intensity, the A1s create a realistic audience that’s blasted through an L-Acoustics PA system focused on the court and through a second JBL PA system focused on the seats. (Fans in the stands are virtual as well, using Microsoft Teams software to let several dozen populate flat-panel displays, although NBA players will be allowed to have up to four guests inside after the first round of the playoffs.)

In addition to the two “weather stations” upstairs at each court, there is a third on the main floor at the front-of-house mix position for the PA systems. It, like the extra Launchpad at each “weather station,” reflects the broadcast level of redundancy built into this novel system architecture.

The duties of the two QLab operators are divided according to the types of sounds. One focuses on the “base layer” — a near-constant thrum of collective noise that comes naturally from hundreds or thousands of fans in the seats, referred to as “murmur” tracks. They’re surprisingly sonically protean, able to swell and recede with the action on the boards, and, if the QLab’s randomizer function is constantly engaged, the same samples are not retriggered. 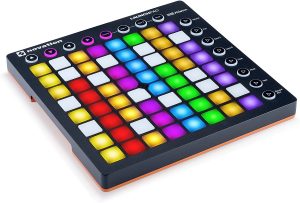 The 64 buttons on the Novation Launchpad enable control of a range of crowd sounds and their volume and intensity for NBA games without fans in the stands.

“It’s like mixing sound to picture,” notes Ellen Fitton, a content editor for the crowd sounds, who has worked as a recording and mastering engineer in New York recording studios on rock and classical-music productions. “There’s a narrative to the games, and we’re reflecting that, using the colors in the sound palette we have to work with. We have eight to 10 base layers that we can vary the energy levels on as the narrative changes.”

The other QLab operator handles crowd reactions, the “aahs” and oohs” in particular moments. Even those have their own taxonomy, a simple but critical one the weathermen have gleaned from watching the hours of game video provided by the NBA as rehearsal materials.

“If he makes the shot, it’s an ‘aah!’ and if he misses it, it’s an ‘ooh,’” says Dan Gerhard, a conservatory-trained flutist who found that he preferred the technical side of music production since becoming a freelance audio engineer three decades ago and is serving as an audio sweetener.

Two more roles are assigned to each court: a game director, appointed by the NBA, controls specific team sounds, such as cheers and chants, and a DJ, a fixture at regular NBA games. In addition to the music played, the DJ triggers the rafter stomps that accompany audience calls for “De-Fense!” In the COVID universe, the DJ also will trigger that prerecorded chant, with both sound effects sequenced in the QLab system.

Each court’s game director is also in charge of any “boo” calls, reflecting understandable sensitivity around negative emotions.

“We discussed it and decided we didn’t want to be in charge of any of the more negative crowd-sound aspects,” says Nathan Allers, senior design engineer, Firehouse Productions. “We felt the game directors, as reps of the league, were more appropriate to make those decisions.”

An NBA producer also has say regarding overall volume levels of the crowd sounds. Crawford, who with Fitton and Gerhard shared an Emmy Award last year for their collective sound work on the NBC live production of Jesus Christ Superstar, points out that the volume will often be dictated by the population level of “attendees” in the display seats, which can rapidly diminish as virtual spectators give up when game scores get very lopsided.

“If the seats are full, then the reactions will be stronger,” Crawford says. “If they’re already heading for the ‘subway,’ then not so loud.”

The crowd sounds can be moved around the court via the “player” PA system — aimed at the court instead of the stands to energize the athletes — which is divided into 10 hangs of speaker boxes, allowing the FOH mixer on the floor to move home-team cheers closer to the baskets as the action converges on it. It can be remarkably realistic in terms of approximating the dynamics of a real audience. For example, when a “home team” crowd would chant “De-Fense!” the DJ triggers both the kick-drum tattoo and the prerecorded chant. Then, that combined audio can be moved around the room via the 10 PA zones to follow the action, something the 5.1 surround broadcasts on ESPN and Turner Sports can reflect.

“With [less intense] defense chants, we just move them around the room, so it’s pockets of them here and there,” Crawford explains. “When it’s a medium defense, it’ll take up more of the upper [speakers] because upper-seats fans are more rowdy. And then, on the really loud defenses, it’s just coming from everywhere. And there is some additional low end in there to give you the sense that people are banging their feet on the rafters. We use different techniques between broadband-spectrum frequency response and intensity as well as volume to create different scenarios for different parts of the game.”

Many of the 800-plus sound files that the teams work with were sourced from the NBA 2K videogame, which themselves were taken from actual NBA games. However, says Gerhard, the samples often weren’t pristine.

“Unfortunately, a lot of it was contaminated by sneaker squeaks, so you’d be hearing them even when you’re not seeing them on screen,” he says, adding that the A1s themselves created some of the sounds via Foley techniques. 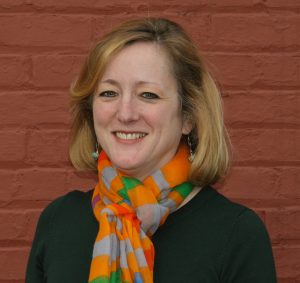 Ellen Fitton: Fan sounds are important to the emotional connections to the game. We heard one coach say after the team had eked out a victory that the ‘crowd really helped us!’”

Many of the files were edited to remove artifacts, such as referee whistles and players talking. Gerhard and Fitton also applied cascading high-pass filters to some of the edited sound files to eliminate some of the low-end rumble that would build as more layers of sound effects are applied as games build to crescendo points.

Interestingly, not all of the audio sweeteners were necessarily fans of the game. Allers says his fascination was with the system design and the hardware.

“We tried to pair one actual sports fan with one who wasn’t as into it, like me,” he adds. “Now I’m watching two pro games a day.”

His colleague Gerhard says his attraction to basketball was stronger when he was younger. Modern NBA play was an eye opener.

“I can’t believe so many players can make those three-pointers so often from so far away,” he marvels. “We have to reflect that in the crowd reactions.”

And, as teams change, so do the sounds. That’s done by replacing folders of team sound files within the QLab drives. These folders contain not only the audio samples but also versions of them at various volume levels, the mechanism by which the loudness is controlled. Each of the channels to which these team-specific clips are assigned has five intensity levels that the mixers can choose from based on the heat of the moment during play; the murmur tracks have nine intensity levels.

As the NBA moves into the Playoffs and the Finals, Crawford expects that, as teams move up in the rankings, they will be sending even more content in for the crowd sounds.

Perhaps most surprising of all was the fact that traditional broadcast A1s, several of whom had gone on record with negative feelings about the idea of faux crowd sounds, now seem not only to accept the concept but embrace it.

Scott Pray, one of ESPN’s lead A1s on the NBA Restart, acknowledges that he was one of those against it. Not anymore. “I’ve done a 180 on that, based on how remarkably well Firehouse Productions and the league have executed it.”

Pray and other broadcast A1s take a 4.1 feed from the weathermen and enhance it with ambience from their regular crowd microphones, which are still deployed in the NBA courts in the bubble to pick up the overall arena sound. Those make the faux “crowds” sound even more natural, he says. Other than that, the crowd-sound mix goes straight through to viewers, who already seem content with sharing the games with the virtual “fans” in the stands.

“That really lends itself to what we’re doing with the audio,” says Pray. “The components match up.”

Says Fitton of both A1s and athletes, “They’re coming around to it, because the fan sounds are so important to the emotional connections to the game. We heard one coach say in an interview after the team had eked out a victory that the ‘crowd really helped us!’ So you know it’s making a difference.”