The remote production will be based at NBC’s Stamford facility

The Kentucky Derby is typically one of the largest operations on the NBC Sports Group calendar, with a sprawling truck compound and a Super Bowl-size production complement. However, with the pandemic creating a most unusual scene at Churchill Downs this year, the Peacock’s production team will be producing the Derby broadcast remotely from the NBC Sports Production Operations Center (SPOC) in Stamford, CT. 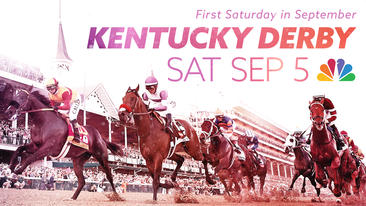 “As sports television has evolved as a result of the global pandemic, so has this week’s Derby production plan,” says NBC Sports Coordinating Producer Rob Hyland, who has been a part of the network’s horse-racing coverage since 2001. “Our cameras and audio will be based in Louisville, but the production will be done in Stamford, utilizing a series of mobile units in our parking lot. With that, [it is] a very different production plan, but I’m confident we will deliver an entertaining broadcast on both Friday and Saturday.”

Although the remote-production model is nothing new to NBC Sports, which also produced the Belmont Stakes remotely from Stamford in June, the Derby is an altogether different animal. Largely built on the pageantry and atmosphere created by hats, mint juleps, and thousands of fans, the Derby is “a five-hour beast with only about 12 minutes of action,” according to Hyland. As a result, the NBC Sports production team will take a very different approach for this year’s Run for the Roses.

“This year’s Derby will have a very different feeling without crowds,” says Hyland. “We hope to provide a little bit more of an intimate experience without that crowd roar.”

In Stamford: Trucks at the Loading Dock, Announcers in the Studio 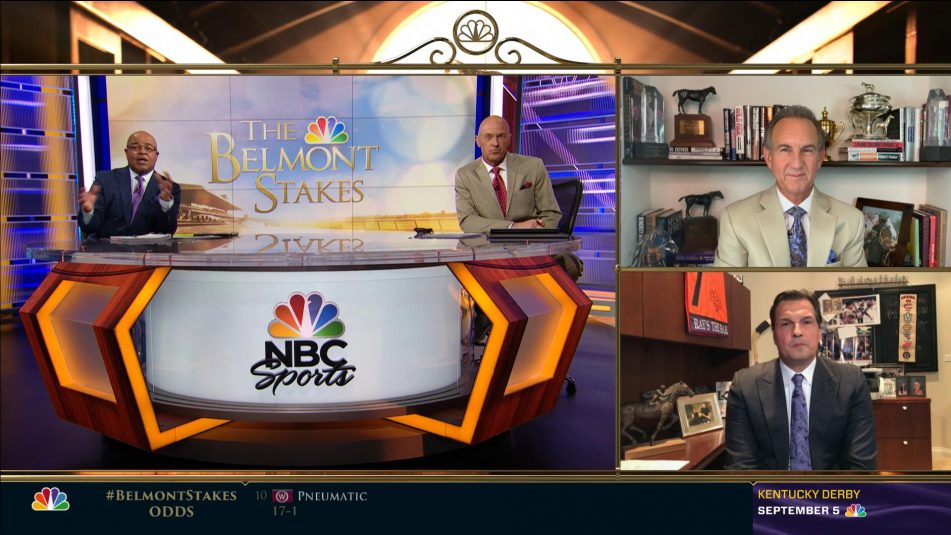 NBC’s announcers will be socially distanced in Stamfrod and Louisville as they were at the Belmont Stakes in June.

NBC has rolled up NEP’s EN-1 A (control room and graphics), B (video and audio), and C (EVS replay) at the loading dock in Stamford. All SPOC sources and all audio/video sources from Louisville will go through the EN1 mobile units, with Hyland and director Pierre Moossa at the front bench in the A unit. The Derby crew of nearly 50 people at the SPOC are required to wear masks and maintain social distance at all times — both in the trucks and inside the building. As a result, positions have been spread out within the trucks, and NBC is also using areas of the building in Stamford to ensure social distancing. All personnel are also required to stay in their respective trucks and areas to minimize interaction wherever possible.

“The mechanics of how we’re doing everything in the show have become a little bit, obviously, more challenging,” says Hyland. “But we’ve got an incredible technical-operations team that has ensured the safety of not only the people in Louisville but the people here in Connecticut. While it just may be different than it was in the past, I don’t expect the broadcast to be much different in terms of the operation of the show.”

In Louisville: Condensed Footprint and an Intimate Feel 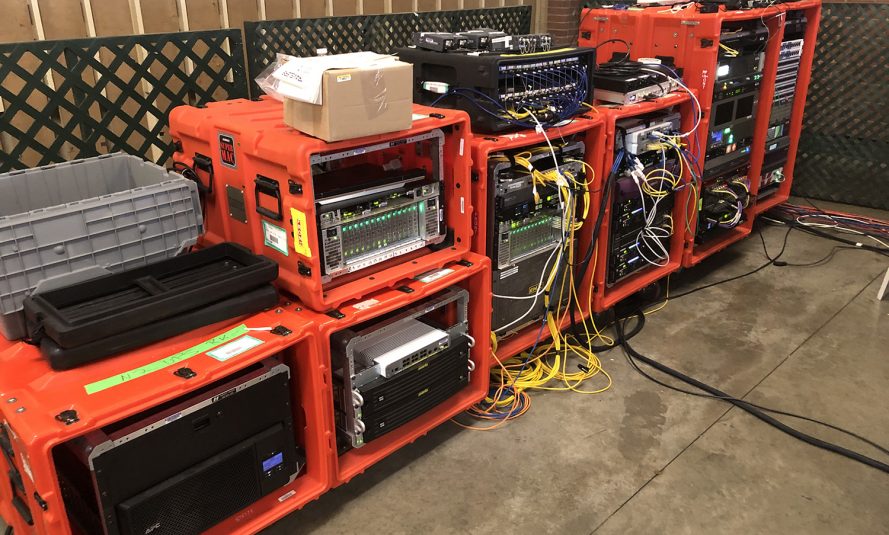 NBC Sports Group’s onsite footprint in Louisville is significantly smaller than usual, with roughly 100 crew members on hand (close to 45 are in Stamford) and NBC’s proprietary NEWBERT remote flypack handling transmission to and comms with the SPOC.

“At Churchill Downs, even our meeting spaces [for] our camera operators will be socially distanced,” says Hyland. “Our director Pierre Moossa will arrange a [virtual] call to conduct a format review for both Friday and Saturday shows. That’s one example in terms of communication with this staff. Everything’s being done virtually.”

NBC has deployed approximately 30 cameras throughout the grounds, including an 80-ft.-high main camera tower and a HelmetCam on the outrider for covering the winning jockey — both staples of NBC’s Triple Crown coverage.

NBC will also outfit three jockeys with microphones for every race they’re in on Friday, as well as three owners on Friday and Saturday to capture final instructions before the races. Although the microphone deployment remained largely the same at the 150-acre venue, Hyland believes that his audio team will be able to capture much more all-access sound because of the absence of roaring crowds.

“I think we’re going to lean a little bit harder on the intimacy that we can provide, because there are no external distractions in terms of noise and crowd. Once we’re on the track, I think, it will be an enhanced experience because of that.”

Around the Country: Bringing in the Fan Element Virtually 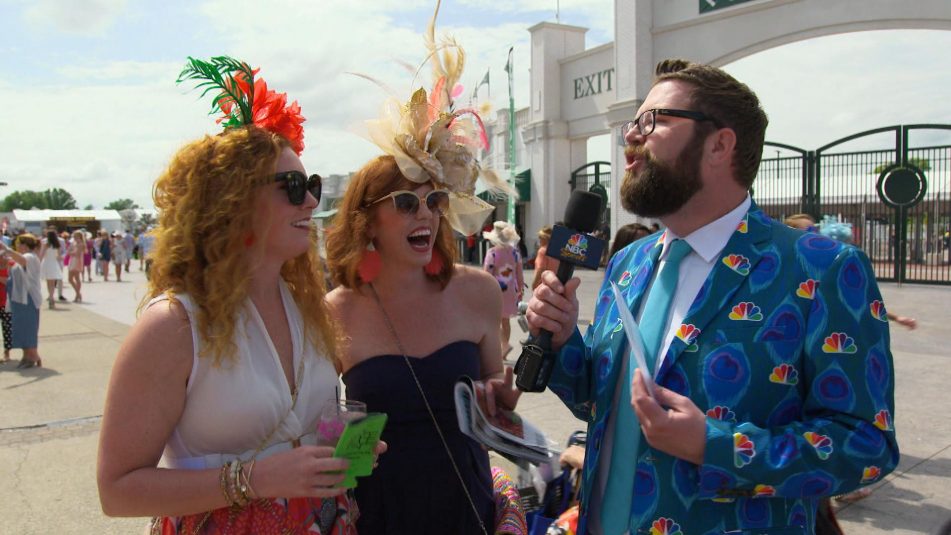 Instead of capturing the scene onsite at Churchill Downs, NBC Sports reporter Rutledge Wood will host a virtual watch party during the Derby.

Without fans onsite in Louisville, NBC is looking to bring excitement to the telecast virtually. NBC Sports reporter Rutledge Wood will host a virtual watch party from his home and celebrate with fans around the country along with special guests. NBC will provide live remotes in Denver, Los Angeles, and Saratoga, NY, via LiveU bonded-cellular IP camera systems.

“We’re going to be looking around the country at how Derby fans are celebrating the day,” says Hyland, “Obviously, we’re leaning much less into the [onsite] atmosphere because there is no atmosphere, [but] the production will still be fast-paced. We’ll tell great stories, and we’ll still entertain the viewers.”