For this global competition in the age of COVID, flexibility was key

Every August in New York City, the borough of Queens is home to one of the most prestigious Grand Slam tournaments in tennis, the US Open. As COVID-19 continues to loom throughout the metropolitan area, matches are being played without spectators. The incredible effort of the United States Tennis Association’s (USTA) digital team is serving up supplemental content on the US Open App and USOpen.org for avid and casual tennis fans alike.

“Our digital properties are always about how we tell the story of the tournament to the world,” says Kirsten Corio, managing director, ticket sales, hospitality and digital strategy, USTA. “We considered our more casual fans since there may be few live sports being played. We thought about how we could help those fans learn more about the players and the matches, which led to the development of a few different things on USOpen.org and the app.”

Change of Course: USTA Adapts to an Empty Flushing Meadows

Finalizing the content strategy for one of tennis’s crown jewels takes a ton of time. The effort usually starts shortly after the conclusion of the previous year’s tournament, but the national shutdown of sports in March forced the USTA to change its process. The team monitored the situation and devised multiple backup plans. 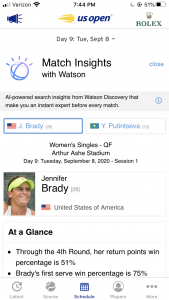 “We were planning for different scenarios with some including fans, some including limited fans, and some including no fans whatsoever,” says Corio. “It wasn’t until late May when we realized that there was no way that we could pull this off with fans onsite, so all of the digital activations that we planned since the end of the 2019 US Open had to be rethought.”

Prior to the action taking place in Flushing, other competitions resumed without the presence of fans. As the pandemic worsened, the digital team needed to reimagine how to execute this newly developed approach with minimal onsite staffers and a majority of its workforce working from home, including Corio and Nicole Munroe, senior manager, pro tennis marketing, USTA.

“We also had to think about how we would logistically operate the whole production remotely,” Corio adds. “Typically, we have a mix of editorial, video services, photography, digital, technology, social media, and the IBM team in one place. It’s usually 65 people or so in that room, but no one is there this year.”

The one challenge that needed to be overcome is to relay accurate and precise data for matches occurring miles away from the offsite team. With the possibility of latency added by the distance and by the pace of a match, the team came together to set up the necessary technologies.

“We wanted to ensure that we had the backbone to enable real-time live scoring, point-by-point scoring, and all of the things that you come to expect from digital platforms year after year,” says Corio. “We’re exceeding all of our expectations with how efficient we’ve been on both technical and content production.”

IBM, the USTA’s longtime official technology partner, was essential in constructing the infrastructure for the remote and cloud-based workflows. Along with supplying a sturdy production foundation for the USTA, it has also played a vital role in numerous amenities accessed on the digital avenues of the tournament. Through IBM Watson, the company’s AI-driven analytical tool, both astute observers of the game and newcomers can spend hours on three main focal points: Match Insights, Open Questions, and Ask the Open. 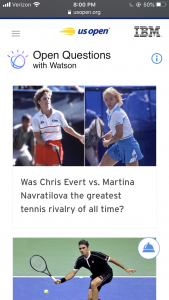 Open Questions allows fans to give their take on some of the sport’s age-old debates.

Prior to any match, Match Insights provides a quick overview of upcoming matches through public information gathered from countless websites on the internet. It has become a pseudo cheat sheet for fans before the players hit the court.

“Watson is able to sift through thousands of articles, blogs, expert opinion pieces, and stats to convert into a narrative format that enables any viewer, casual or avid, to look at information before a match,” says Corio. “It gives some background on the keys for those individual players in their past matches as well as their strengths and weaknesses. It has been really effective at getting people up to speed on what’s going to happen or who these players are.”

For the more argumentative fans that love to pose hypotheticals, Open Questions is the destination that sparks intriguing tennis conversations. Whether it’s a contemporary debate or one that has been raging for decades, artificial intelligence and Watson Discovery are at the heart of this engaging aspect of the app.

“Open Questions seeks to enhance iconic sports debates,” Corio says. “For example, ‘Was Chris Evert vs. Martina Navratilova the greatest tennis rivalry of all time?’ Then, it allows fans to interact with their opinions. [This concept] did not rely on match performance over the past six months, unlike some of the other things that we considered.”

Ask the Open is an interactive chat function powered by IBM Watson Assistant. For the inquisitive and the curious, this real-time messaging system can help with questions about a certain player’s match schedule, the history of the tournament, and other fact-based questions. 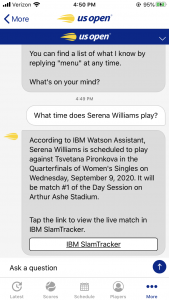 Ask the Open is a question-and-answer chat that offers details and tidbits about the tournament.

In recent years, augmented reality has become a staple on the mobile app. Last year, the statue of Athena Gibson unveiled before the tournament offered fans an opportunity to learn more about her history and the stories of past champions through an AR experience. This year, although fans can’t interact with AR on the grounds of the US Open, fans can use this virtual solution to watch matches on a three-dimensional, re-created playing surface called MatchCast.

“It’s a couple of years in the making,” says Corio, “and it has been a really fun project with IBM to leverage their data to provide this companion experience. If you’re in a place where you’re unable to watch the broadcast or listen to radio, it provides an opportunity to follow along in real time where the actual balls are going. It’s pretty consistent with the experience from last year, but it’s something we think is pretty cool.

Although the digital offerings are the main source of innovation this year, Van Wagner is holding down the in-venue production at the USTA Billie Jean King National Tennis Center. In its second year within the new control room in Louis Armstrong Stadium, the onsite crew is much smaller than what has been typically used in years past. 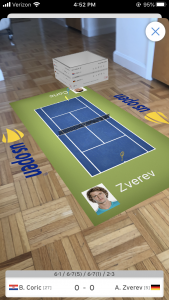 On MatchCast, fans can create a portable, three-dimensional court to watch live action in augmented reality.

“We’re probably operating at about a sixth of our normal staff,” says Nate McCoart, director, technical operations, productions, Van Wagner. “It’s definitely a much smaller overall footprint as it relates to personnel.”

Like Corio, members of the Van Wagner team are performing their respective roles from the comfort of home. Leveraging remote workflows is the consequence of the COVID-19 pandemic, but it’s also a strategy that the company has become accustomed to with other high-profile events in 2020.

“All the creative workflows are remote, so our editors and designers are either working from home or back in our offices,” says McCoart. “We’re using a lot of the systems that the USTA put in place for their internal groups that are working remotely as well as the media and rightsholders, so we’ve adapted to getting those guys what they need.”

Through open pathways to and from the complex, McCoart and company are able to send raw elements and receive edited material for use before, during, and after each match.

Through a combined initiative between these two parties, fans are invited to submit recorded cheers and other words of encouragement for their favorite players. Van Wagner is using the app’s digital content to add a new wrinkle for the onsite player experience and telecasts on ESPN via Fan Cam. Seen during productions of the NBA, MLS, WWE, and other professional sports, Fan Cam has brought fans courtside with a handful of nine temporary videoboards located near the lower level of the stadium. 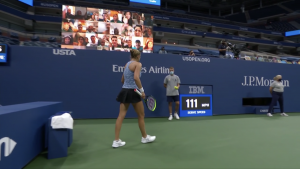 Positioned around the court are videoboards on which fans from around the world support their favorite players with cheers submitted through the app.

“The virtual fans cheering on the LED boards around the court during changeovers are all near real time,” says Corio. “We ultimately aligned around a strong desire to bring fans into the experience in a way that was also meaningful for the players in the stadium.”

Tennis is a global game, with participants from countries around the world. With that in mind, the Fan Cam is directing fans from specific countries to particular videoboards when a certain player is on the court.

“We can even be as granular as showing only fans that are cheering in Germany,” Corio explains “[In addition], we’re displaying virtual player boxes, where players in Arthur Ashe Stadium can identify their friends and family and interact with them on the court. We wanted the players to feel some semblance of normalcy and also their friends and family to feel connected to them if they couldn’t be there in person.”

On the Grounds: Exterior Displays Cater to the Players

Despite the lack of attendees around the spacious concourse outside each venue, Van Wagner is still firing all video displays at normal capacity. For this endeavor, the staff is executing this task with the players in mind. 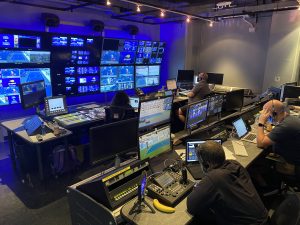 Van Wagner’s smaller onsite team is relying on an infrastructure of remote and cloud-based workflows.

“A lot of the public spaces have been converted into player getaway and warm-up areas, so the grounds are being programmed in a pretty similar fashion to what you would see with a full attendance,” says McCoart. “The USTA wanted to give the players the ability to look into the matches that are going on in the various venues throughout the campus. We’ve kept that workflow of [displaying] scoring, practice schedules, and other player-centric messaging as a way to communicate with players, coaches, and other tournament personnel that are around during the course of the day.”

Along with the new Fan Cam, graphics shown on other displays are still being pushed out by Ross Video’s XPression Tessera and Carbonite Mosaic. This near-normal procedure is a product of constant planning and preparation.

“In terms of getting all the pieces together with a limited onsite staff, it has been a challenge with some late nights and early mornings,” McCoart says. “It has been cool to see how not only we but even others have been able to adapt to meet [production] demands in a remote workflow. There are always things that we’re learning on a daily basis that I think will continue in the post-COVID era, and, as the broadcast industry has been pushed into hyperdrive with some of these workflows, I think there are some things that will come out of this that will be beneficial in the long run.”

Corio, in her fifth US Open, is one of the many individuals spearheading the digital effort from home, but, despite the circumstances, she’s inspired by the work that her team is accomplishing for millions of fans.

“We’ve gotten really good feedback from the fans that are around the world,” she says. “We feel that a lot of these elements have legs beyond a tournament where there are no fans onsite, because, for a global tournament where 800,000 or so people come every year, there are hundreds of millions of fans around the world that will never attend. Being able to bring them into the stadium experience is something we’d love to continue in a meaningful way.”