NBC Sunday Night Football enters its 15th season — after nine straight atop the primetime-TV ratings — facing unprecedented challenges in the face of the pandemic. However, that’s not stopping NBC Sports Group from continuing its tradition as one of the largest and most high-tech live sports productions in the business. 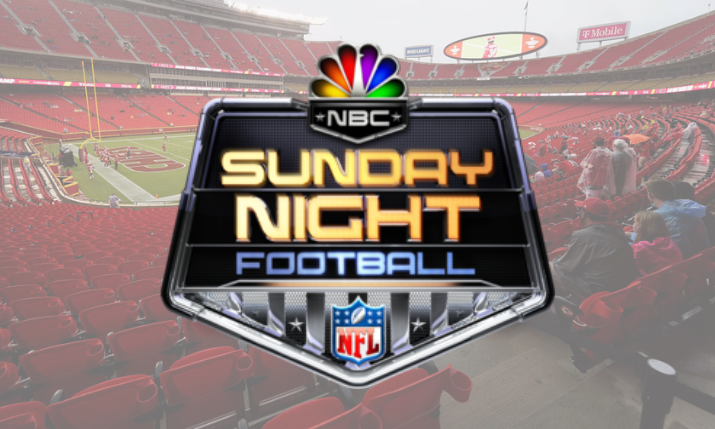 “We feel like we have a solid plan to start the season but know full well that we’ll be adapting and adjusting as the season goes on,” says NBC’s longtime SNF executive producer, Fred Gaudelli. “I’d say the biggest challenge is that everything that was routine for the last 15 years, at least for Sunday night, is no longer routine. And everything you do or have done has had to be rethought — even just walking into the stadium.”

New to NBC’s camera complement this year will be a C360 camera attached to the bottom of the SkyCam aerial system. This new angle will provide an overhead replay perspective that is expected to yield looks at everything from the techniques of linemen along the line of scrimmage to close plays along the sidelines. 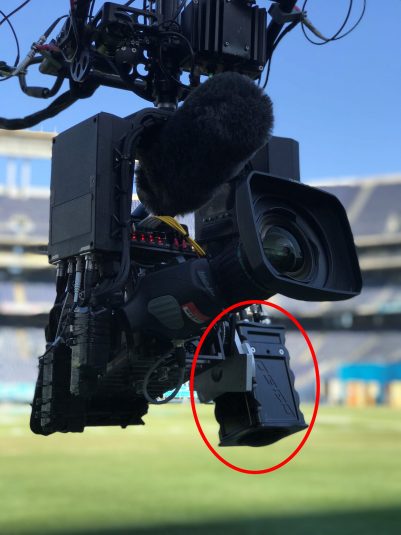 NBC will deploy an 8K C360 camera on its Skycam for Sunday Night Football to provide a 180-degree immersive field of view when creating replays.

In addition, because the camera shoots in 8K and records in a 180-degree immersive field of view, the production team can reframe and manipulate replays to provide more-definitive views. For example, if there’s a question about a receiver’s catching a pass on the sideline, the technology can freeze the entire image, zoom in, and focus on the player’s hands to confirm possession and then pan down to the player’s feet and zoom in to confirm that both touched the ground before going out of bounds.

“Basically,” says Gaudelli, “it’s a camera that will shoot sideline-to-sideline, but it’s an 8K camera, so it allows you to zoom in to a great extent without any picture-quality loss whatsoever. And not only can you zoom in, you can pan the full 180 degrees from sideline-to-sideline. I think it’s going to help [SNF analyst Cris Collinsworth] illustrate a lot about what happens in quarterback play: a safety turns his hips, the quarterback goes the other way. You can manipulate the screen to accentuate what Cris is describing to the audience.”

The C360 camera will fly attached to the bottom of SkyCam to provide up-close and intimate replays of the game inside the tackle box, illuminating the talents of top offensive and defensive linemen in a way not previously seen on NFL telecasts.

“Because it rides on the SkyCam right below it,” Gaudelli explains, “you’re going to have some incredibly intimate replays of people like [Pro Bowl defensive linemen] J.J. Watt or Chris Jones. Cris Collinsworth was preparing a tape about the Kansas City defense and was commenting on Chris Jones’ hands and how he uses them and how he’ll grab the offhand of an offensive lineman. Not only will we have a great view of that, but I’ll be able to zoom into his hand grabbing the hand of an offensive lineman with no picture-quality loss.”

Although C360 camera systems have been used on a variety of live sports productions ­– including in various applications for NFL broadcasts by Fox Sports, ESPN, and CBS Sports — this marks the first time it will be outfitted on a SkyCam aerial system to create a truly immersive overhead replay experience. Gaudelli and director Drew Esocoff will be tasked with deploying this new system with almost no pregame practice since the NFL Preseason was canceled due to the pandemic. Although the two were able to rehearse with the C360 system last week at Arrowhead Stadium, tonight’s NFL Kickoff Game in Kansas City will be the first time they will use it in a live broadcast.

“It would have been awesome to have a chance to play with this for a couple of games,” says Gaudelli, “but we’re going to come out of the box with it. I think it might be a little bit slower to start as we kind of get our legs underneath us with the system, but we’re really excited about it.”

As for the rest of the camera arsenal, NBC continues to rely on a mix of Sony HDC-4300’s (running at various speeds and resolutions), Sony HDC-4800 4K 4X slo-mos and HDC-P1R RF Steadicams (provided by BSI), as well as the SkyCam cable-suspended aerial system. NBC will rely on Canon glass — primarily DIGISUPER 95 box lenses and a mix of HJ22 and HJ14 portable lenses. The broadcaster is also testing out the following Canon PL-mount cinema lenses during tonight’s NFL Kickoff game: 14.5mm-60mm, 15.5-47mm, 14mm Prime, 20mm Prime, and Cine-Servo 25-250mm.

ND1 Returns to the Compound; Graphics Edit Head to Stamford

NEP’s ND1 A, B, C, and D mobile units return for a seventh season serving Sunday Night Football, but the layout of the crew will be quite different. Workstations are at least 6 ft. apart inside the trucks, and crew members are required to wear masks and abide by strict safety protocols at all times. As a result, NBC has rolled out an additional truck at the compound to ensure social distancing among all positions. In addition, NBC worked with NEP to upgrade the air-filtration systems in the trucks to operating-room grade. 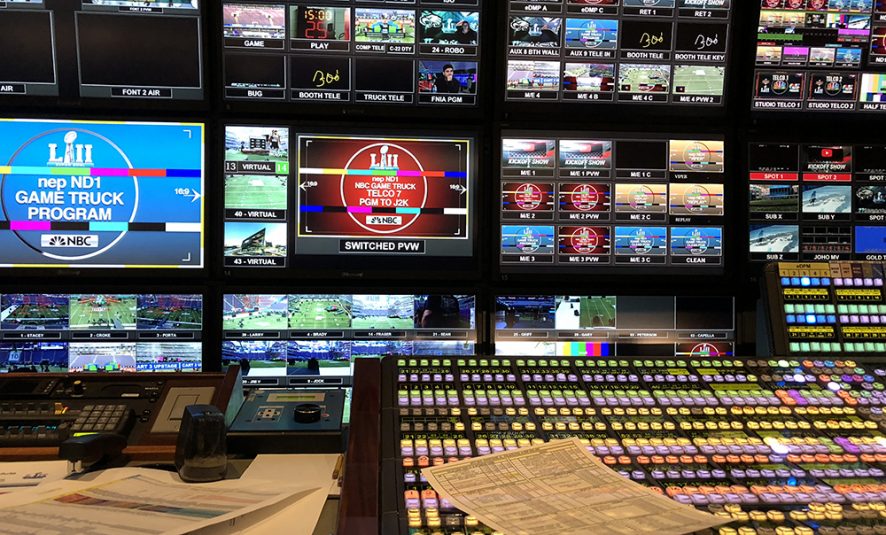 Play-by-play legend Al Michaels will all games on-site in the booth for the majority of this year’s SNF games (Mike Tirico will fill in for a handful of games to limit Michael’s travel) alongside Collinsworth with the two socially distanced. Sideline reporter Michelle Tafoya will also be on-site, but she’ll be located in a “moat” in the first row of the stands rather than on the field.

Although SNF still has one of the largest onsite footprints of any U.S. live sports production, NBC has opted to relocate the entire graphics and edit operation to its Sports Production Operations Center in Stamford, CT, where they will be contributing to the broadcast remotely in order to limit the bodies onsite.

“It’s not like that hasn’t been done before with other shows or at other networks,” says Guadelli. “I’m not too worried about that other than you don’t get to see the people that you would see on a normal basis.”

“I totally understood and supported their decision,” he says. “These are people that have been on the team for 15 years, and there was a lot of unspoken language that could occur, and things would happen. That doesn’t happen any longer now because it’s new people. I’m sure they’re talented, but they’ve not been in the system, and they’ve not done it our way. There’s going to be the growing pains that come with that as well.”

Fan Factor: Virtual-Fan Mosaics, Fake Crowd Noise Are In; Virtual Fans in the Stands Are Out

NBC has opted to go without virtual fans in the stands for its SNF telecasts (Fox is the only broadcaster that has committed to do so at this time). Although NBC Sports Group discussed at length the possibility of using virtual fans, Gaudelli believes that the virtual-crowd AR graphics must be available on every single camera (rather than just a limited number as MLB on Fox has done) for it to be a realistic experience for viewers.

“Without the ability to instrument every single camera, it just didn’t feel right,” he adds. “In football, we have 25 cameras that cover the game. You would have to instrument 25 cameras and then build virtual fans for every single one of those angles in a realistic perspective. The technical power you would need to do that would increase the compound tenfold. It’s just not feasible financially or, I would probably say, technically at this point, to have every single camera configured so you can have it.

“It becomes a little bit of a gimmick,” he continues, “and this is not a shot at Fox because I think what they’ve done is tremendous, but [use of virtual fans on a limited number of cameras] is just not realistic. At the end of the day, it just didn’t feel right to me.”

Although there won’t be virtual fans, NBC will lean into virtual graphics for SNF, continuing to increase its use of AR elements and redeveloping them to account for the look of empty stadiums on wide shots.

To integrate fans into the broadcast more, NBC will also use a “virtual fan mosaic” similar to the experience seen during the NFL Draft in April. This experience will be integrated as virtual graphics within the broadcasts.

While a handful of NFL teams will allow a limited number of fans onsite for games this season (including at Arrowhead Stadium tonight), broadcasters will be tasked with finding new ways to recapture the ambiance of a sold-out NFL stadium. With that in mind, NFL Films has captured natural sounds from 30 of the league’s 32 stadiums over the past four years (with the exception of the new SoFi Stadium and Allegiant Stadium) to create a sound loop that’s authentic to each stadium. The league has hired an audio engineer in each city to “score” the game as it plays out.