WWE Thunderdome allows 1,000 fans to react to the action live via massive LED board

Of all the challenges dealt to live-sports producers by the pandemic, one is by far most obvious to viewers: the absence of fans in the stands. Broadcasters have deployed a wide array of solutions to simulate crowds, ranging from AR-fueled virtual fans in the stands to Microsoft Teams video conferencing. However, WWE and The Famous Group (TFG) believe they have created the most visually striking approach to date at the new WWE Thunderdome experience at Amway Center in Orlando.

“We are very excited about the successful integration of the virtual-fan element to our broadcasts,” says Duncan Leslie, SVP, technical operations, WWE. “It has added an energy that both the talent in the ring and the viewer at home can feel. The interplay between fan and [WWE] Superstar creates a signature chemistry that is unique to our shows.”

Inside the WWE Thunderdome Project 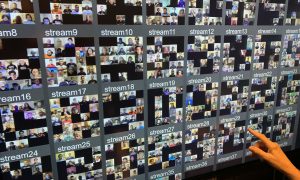 The Famous Group controls the virtual-fan system for WWE Thunderdome.

The Thunderdome, which launched at WWE SummerSlam last month, features a massive LED board behind the ring, displaying nearly 1,000 fans watching and reacting live to the action. While other leagues have deployed similar solutions, the scale of WWE’s effort —in terms of both the number of fans and the low-latency technology being used — is unprecedented.

“WWE had a vision to create the largest and most visually impressive group of virtual fans ever,” says Jon Slusser, partner, The Famous Group, “and we were excited to bring their vision to life. It’s a very complex system with many moving parts, from registration to advanced broadcast technology, to video cloud technology and real time fan moderation. It all has to work together seamlessly in real time.

First, fans register for their virtual seat for WWE shows at www.WWEThunderDome.com or at WWE’s Facebook, Instagram, or Twitter pages. Once approved, they are given instructions on proper behavior on-screen, with TFG providing real-time fan moderation throughout each telecast. During the broadcast, fans are brought virtually to the arena via a sprawling LED board using TFG’s proprietary technology. New fans are cycled in throughout the broadcast, depending on demand. 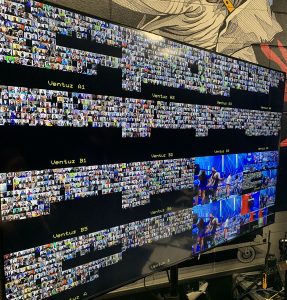 WWE’s virtual-fan experience can feature about 1,000 fans at once.

“Walking into the Thunderdome is stunning,” says Slusser. “We have been a part of some of the biggest events in the world, and this blew us away. It’s incredible what WWE has done to Amway Center. Having the crowd back at events has created an energy and excitement that you can feel, and we’re proud to be able to help WWE bring the fans back into the arena.”

Although many leagues have brought in virtual fans via video-conferencing tools, the differentiator for the Thunderdome experience is the low latency that allows live interaction with the Amway Center.

“It was amazing to walk out to the center ring for the first test and call to the crowd on the mic and hear them react,” says CJ Davis, creative director, Quince Imaging. “It gives you goosebumps to feel the same energy as if the audience was there in person. While the scale of this project is unprecedented, we have the foundation set so we are able to deploy this solution many times over.” 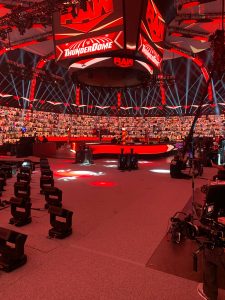 The WWE Thunderdome set at the Amway Center in Orlando is a true feast for the eyes.

Since its debut, TFG has continued to upgrade the quality of the video feeds and added live Superstars during some commercial breaks as a value add for fans.

With sports venues likely to be hosting events without fans or with limited audience for the foreseeable future, Leslie believes the Thunderdome virtual fan integration could present a major step forward for the entire industry.

“I think everyone in sports and entertainment grappled with the challenges of playing to an empty house,” he says. “The creative and visually stunning solution WWE employed is a reflection of our passion for providing our fans and Superstars as dynamic and exciting an environment as possible. The technical takeaways from this are far-reaching and allow for future innovations and exploration.”

Beyond Thunderdome: Virtual Player Box at US Open and NFL’s Fan Mosaic

The Thunderdome virtual-fan integration is just the latest virtual-fan effort this year from The Famous Group, which played a significant role in the Inner Circle of virtual fans for the NFL Draft, “NFL 100 All-Time Team Mixed-Reality“ Pregame Presentation at Super Bowl LIV. 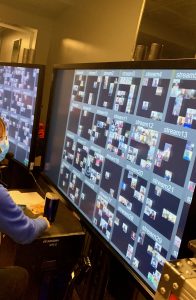 The Famous Group moderates fans and monitors the virtual-fan system during the live broadcast.

“Each situation is different, and so is each solution different,” says Slusser. “Mixed Reality offers an opportunity to create an entirely different environment for the broadcast, while virtual fans can be seen and heard by the athletes and performers. What’s really exciting is combining these technologies with things like projection mapping or mobile AR, which is right around the corner. This is the very beginning of something massive in live events.”

Most recently, TFG worked with the USTA to create Virtual Player Boxes at the US Open this month. Since only a very limited team was allowed to accompany each player at the Open this year, the new feature allowed those competing at Arthur Ashe Stadium to invite guests to be part of the experience through the LED boards inside the venue. The Virtual Player Boxes allowed live interaction during selected moments — such as changeovers — and create a more dynamic experience for both the players and the viewers.

TFG once again worked with Quince Imaging to build an infrastructure that received the individual video feeds to drop inside the player box using a real-time rendering software.

For the on-court experience and to comply with safety protocol, TFG positioned a robotic point/tilt/zoom (PTZ) camera and microphone at the courtside video screens, allowing the players to have a two-way communication with their group. 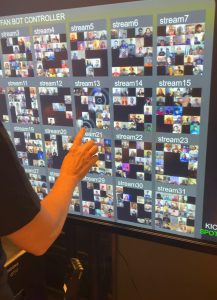 The WWE Thunderdome virtual-fan system is controlled behind the scenes via touchscreen interface.

“Our creative team worked closely with the USTA to develop the 3D design layout and animation for the player-box look and have a unique creative look for both day and night,” says Eric Burak, executive producer, The Famous Group. “We are also employing a team of experienced audience managers that are in constant communication with the player’s entourage members to coordinate their involvement with the virtual-player-box execution.”

Slusser notes that virtual-fan experiences can come in many forms: the US Open used them to support the athletes in a very personal way, while WWE has created a massive spectacle for viewers. He expects these various applications to grow exponentially in the future.

For now, TFG continues to stay busy as leagues search for new ways to engage fans and bring them into the in-venue and broadcast experience. For example, the company played a role in the NFL’s new Fan Mosaic, powered by Microsoft Teams, which debuted Thursday during the NFL Kickoff game on NBC.

“This is the beginning of a whole new platform,” says Slusser. “You’ve seen only the beginning of what’s is possible. Now teams, leagues, and events can sell tickets to their fans globally and not be limited to their own city. This technology creates new revenue streams and can expand the fan base around the world, so you’ll see this live far past COVID. As teams realize they can sell virtual experiences and virtual tickets, this will become an industry standard.”