It has been a frenetic start to the NFL season for ESPN’s Monday Night Football franchise.

First, an opening-night doubleheader spotlighted the debut of a new broadcast booth and a new front bench in the truck (with first-year producer Phil Dean joining second-year director Jimmy Platt). Then, it was the first NFL game ever played in Las Vegas as the Raiders christened their new $1.84 billion palace, Allegiant Stadium.

Now, tonight (8 p.m. ET, ESPN), it’s the Game of the Year (on paper, at least) as defending Super Bowl champion Kansas City Chiefs travel east to take on one of their greatest challengers for the crown: the Baltimore Ravens. 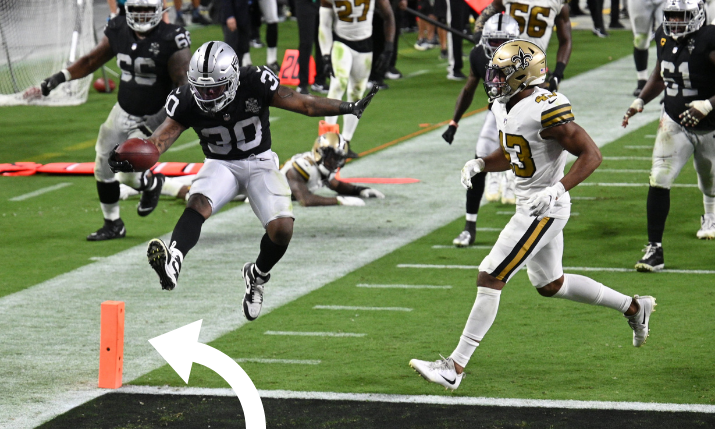 ESPN is deploying upwards of 50 cameras onsite for Monday Night Football coverage, including the return of its pylon cameras, on both the goal lines and the line-to-gain.

Behind the scenes, the Monday Night Football road show has been scaled down some, with about 130 people onsite each week. Even so, the production is as big as ever, with more than 200 professionals working on the marquee franchise.

To help meet the challenges of the COVID-restrained NFL season, ESPN is implementing the GREMI version of its at-home production workflow. What this model does is keep on-air talent and much of the production and operations team onsite (the show is still traveling its massive NEP EN1 truck package to each game site), with four EVS operators, a graphics operator, Viz Libero telestration, and the guts and operations of the in-game scorebug, which is being handled from a control room in ESPN’s home facility in Bristol, CT.

With no NFL preseason, it was no small task to get this workflow up and running in time for opening kickoff this month.

“It was very challenging,” says Jim Munn, senior remote operations specialist, ESPN. “A lot of these concepts [were developed] as sports started shutting down. We realized very quickly that we needed to do our job in a safe way, so we used7 technology that we had on hand. How could we repurpose what we had to do through remote work calls? That sort of led us to this whole project.”

At ESPN, studio shows like The Jump and First Take are regularly referenced as the shows that got ESPN back on the air following the shutdown and started the evolution of its live-production workflows. For game productions, the network has learned from its bubble executions with the NBA and Major League Soccer. Despite those opportunities and the advantage of the NFL season’s starting nearly six months after the shutdown, uncertain preparations for the NFL season and the loss of the preseason left the ESPN ops team with little opportunity to test-run its innovations in a live environment.

“In our normal year, we use the preseason to vet out technology,” Munn points out. “We do a lot of trials, some of which never make air, but we do a lot of testing on our preseason games. We did not have that opportunity. We also didn’t have an opportunity even to get everyone together. We were always meeting on Zoom or [Microsoft] Teams. We never had a chance to get face-to-face and try things.

“Obviously,” he continues, “we don’t want to experiment with one of your properties. Everything has to work. There is no excuse if it doesn’t. So we have to be very delicate in our testing and be very sure things are going to work. I think we did a very successful job bringing in a lot of new technologies and a lot of changes in a short window.”

That hasn’t kept ESPN from trying to innovate in a few key areas to bolster the GREMI workflow. The ops team worked with the replay giant EVS to implement the vendor’s new LSM-VIA replay environment solution that enables an EVS operator to work from off site without the need for an advanced transport paths to support monitoring. All of the technological elements needed to effectively operate the replay device could be delivered to the operator’s home (or wherever they are working from) over a single connection. In this case, the EVS operators are working out of ESPN’s mothership in Bristol.

“It’s a huge leap forward for us,” says Munn. “We have experimented in the past with our replay [workflows] but the challenge with replay is that if you are running on a server that is distant [from the broadcast site], you can’t have any latency in your monitoring or its really difficult to queue up mark-and-end points. With this new technology, it’s really revolutionized how we’re going to be able to do things now and in the future.”

Says ESPN Senior Operations Manager Steve Carter. “Jim is the one who designed our Grammy model. He laid out all the architecture and worked with the IT folks, and I’ve got to give him all the credit for building, designing, and implementing this. We came out of the gate and had zero time to implement parts of this. We just had to put it together and then hit our first game. And it worked, plain and simple.”

As ESPN settles into a groove following the frenetic start, game broadcasts will start to feel more and more familiar to the operations and production teams. Camera totals continue to hover at an impressive 50 per week, all acquiring in 1080p or higher (Monday Night Football is one of the ESPN franchises broadcast entirely in 1080p), supported by seven super-slo-mo units and by specialty units like SkyCam, Marker Cam, and line-to-gain and goal-line Pylon Cams.

The onsite crew is also deploying a handful of extra POV cameras, putting them in unusual positions in the (mostly) empty stadiums to capture some different angles.

For this week’s marquee matchup between Patrick Mahomes and Lamar Jackson (which the network is dubbing “MVP Monday”), ESPN has put together a wealth of interviews, profiles, and other content spotlighting the league’s two most recent MVPs.

According to ESPN PR, the broadcast will open with a Marvel crossover-themed opening, voiced by Samuel L. Jackson, as well as a package featuring DJ Khaled, in the first of many MNF collaborations between the broadcaster and the musician.