Half the usual staff, all primary on-air talent are onsite in Paris

Tennis Channel returned to Roland Garros this week for what SVP, Production/Executive Producer Bob Whyley often refers to as “our Super Bowl.” However, this year’s operation looks dramatically different from the broadcaster’s past efforts, with a limited crew onsite and extensive use of its Los Angeles broadcast center for remote production. Luckily for Whyley and company, Tennis Channel is well-versed in the art of producing live tennis in the age of coronavirus, having done that consistently since the early days of the pandemic. 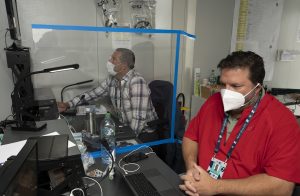 “When you don’t turn the lights off, you don’t have to start from scratch for something like Roland Garros,” Whyley notes. “We’re starting with momentum [dating back] to March. All of us are a lot more comfortable since we aren’t coming off a six-month [hiatus] and doing some big Grand Slam. The people that are working for us here have been working for us for the most part since March. We’ve built up a trust with each other and are confident in our ability to do live tennis in the middle of COVID. This is just a graduation.”

Typically, Tennis Channel travels 150-160 people to Paris for the French Open but has cut that in half this year. Instead, TC is relying on its L.A. production facilities for all editing/postproduction, commentary for its Interactive Mosaic experience (on DirecTV and Tennis Channel Plus), and simulcasts on parent Sinclair’s regional sports networks. The network is also working closely with FFT (French Tennis Federation) on highlights creation and delivery.

Though smaller than usual, the production still has a sizable presence at Roland Garros, with announce booths at Court Philippe Chatrier and Court Suzanne Lenglen and a studio desk inside Chatrier. The primary control room for the linear-TV coverage is also onsite, along with all primary on-air talent.

“We still have a very big production here,” says Whyley. “We have our control room, a strong EVS presence. We do graphics here, and all of our talent is here. Everything’s here to do the show the way our viewers would expect. We’ve just been shrewder on how we are doing the production, to reduce our presence and number [of people] onsite. That’s a good thing, because safety is our top priority.” 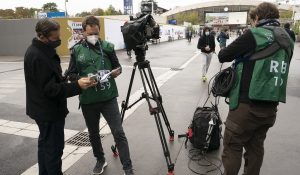 The health and safety of its crew remains the top priority for Tennis Channel, which is following all FFT COVID-19 protocols in Paris, including social distancing, wearing PPE, installation of plexiglass dividers, and consistent sanitization of workstations. Tennis Channel crew were able to obtain special visas through the FFT to circumvent travel delays/restrictions to France since they were all being tested immediately prior to departure and upon arrival in Paris. Tennis Channel has also enlisted used two companies for COVID protocol: Epitome Risk in the U.S. beforehand, Secret Compass in France during the tournament.

Whyley credits new Executive Director, Production Operations, Rob Flores — who joined Tennis Channel in April after more than 15 years at CBS Sports — for leading the effort in setting up the decentralized operations and safety protocols necessary for the network’s complex Roland Garros production.

“We’re doing everything we need to do to be safe, both when we’re on campus and when we’re off campus,” says Whyley. “We feel comfortable that we have a good system in place to keep people safe.”

In L.A.: TC Leverages Home Base for Decentralized Production

Tennis Channel is linked to L.A. via a 10-Gbps fiber pipe, which allows backhaul and high-speed file transfer. The postproduction team, which relies on the Avid Interplay production/media-management system, is located in California, whether at the TC production facility or at home.

TC has also dedicated a control room in L.A. for French Open coverage televised on Sinclair’s RSNs and streamed on the Fox Sports Go app each day from 5 to 9 a.m. ET (along with same-day afternoon re-airs) Sept. 27–Oct. 5. 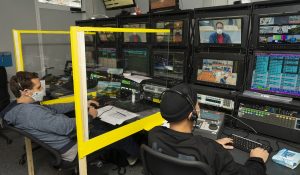 “[The RSNs] are going to be on the air concurrently with us from 5:00 a.m. to 9:00 a.m., and they’ll be showing [matches] that we’re not showing,” Whyley said prior to the start of the tourney. “We’ll be calling that tennis here [in Paris], but the control room [will be in Los Angeles]. We’re excited to introduce the RSNs to Grand Slam tennis. We have been experimenting with that over the last few months, so we’ve gotten used to that workflow. But this is obviously more big-time since it’s a Grand Slam.”

First-ball-to-last commentary from five courts at Roland Garros (the other nine TV courts are presented without commentary) is also being handled from L.A. for the Interactive Mosaic coverage on DirecTV and Tennis Channel Plus.

The Gear: PRG Back in Action on the Technical Side

Tennis Channel has once again tapped PRG to engineer and maintain its technical infrastructure for the French Open (VER provided facilities for several years before being acquired by PRG in 2019).

“They’ve done a great job once again,” says Whyley. “When I signed on with VER — now PRG — years ago, it was about two things: equipment and people. Most of the facility companies have very similar equipment and do a good job, but it’s all about the people. So the reason I have been loyal to [PRG] is the engineering support that they bring, the can-do attitude that they have, how they always go above and beyond and do whatever it takes to make sure that the productions come off seamlessly.”

At the heart pf the PRG-designed system is an Evertz EQX router, along with a Grass Valley Kayenne K-Frame switcher, EVS XT3 replay systems, and Calrec Artemis audio console. For comms, Tennis Channel is using an RTS ADAM intercom system equipped with MADI and RVON cards to talk to the audio console and the remote locations.

PRG too has pared down the onsite team that builds and maintains the system. In addition, it is operating one less control room onsite, given NBC Sports Group’s decision to produce the semis and finals remotely from its Stamford, CT, broadcast center. 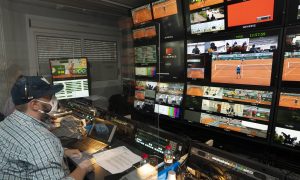 Tennis Channel traveled limited staff to Paris for production of the 2020 French Open.

“The pandemic changed everything we do every day, from social distancing to cleaning regimen to isolation,” says PRG System Engineer Bruno Brunelle. “Roland Garros was always a highlight of our busy travel year, but the excitement of being in Paris and the clay courts of Roland Garros is overshadowed with the constant reminder of the COVID virus and the prevention of transmission. Thankfully, the entire Tennis Channel family has made safety a top priority and has provided testing prior to and during the event in line with French government guidelines.”

Tennis Channel Gets Into the 4K UHD Game

This year, Tennis Channel is delivering 4K UHD coverage from center court at Roland Garros for the first time. The 4K UHD broadcast is being produced by the FFT host-feed team, and Tennis Channel is distributing the feed to DirecTV, Altice, and Comcast in the U.S.

The network is using both UDP and SRT transmission standards to send the UHD/50p HDR feed to the U.S. The 4K pool feed is transported via The Switch and is turned around in L.A. and fed to LTN hub via the ATT GVS in Bixby, OK. Tennis Channel provides commentary for the 4K signal from its L.A. facility and sends this via LTN Global and SRT transport to LTN Global, where the audio is mixed and the frame rate converted from UHD/50p HDR to UHD/59.94p HDR along with inserted closed captioning. The UHD signal is re-encoded and delivered domestically via SRT and private line for distribution.

“We’re excited to bring Roland Garros to our viewers the way they’re used to seeing it,” says Whyley. “We believe that it is important that we are still out here, because tennis is a respite for our viewers. And, to me, sport is even more special when the world’s upside down. It’s great to be here, and we’re happy to be bringing our audience top-tier tennis with the best players in the world.”