On the Gridiron: Atlanta Falcons Adjust To Evolving COVID-19 Policies at Mercedes-Benz Stadium

From no fans in the stands to 15,000 at the third home game, the challenges keep changing

When Mercedes-Benz Stadium opened its doors in 2017, AMB Sports + Entertainment (AMBSE) needed to generate a content strategy that matched its new digs. After producing a few preseason games, the in-venue production team settled in. Three years later, though, the team is back to developing a new plan, one for a venue without fans in the stands and accommodating safety protocols affecting day-to-day operations.

“The season has been a very odd experience for all of us. It feels like we’re watching a practice,” says Tameka Rish, VP, game day and event experience, AMBSE. “I think 2020 is the year of change, and we are continuing to live that through every protocol.”

Widespread changes have been seen throughout the professional leagues to ensure a safe setting for staffers. The NFL is following guidelines in enforcing precautions. When workers returned to the facility and the control room at the beginning of the season, it looked drastically different from the way it had at the end of the stadium’s third year. 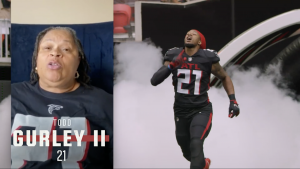 Atlanta Falcons players’ families provided pregame introductions prior to the home opener vs. the Seattle Seahawks.

“We have plexiglass set up at just about every station, separating all of our operators. We don’t have any people that are less than 6 ft. [from each other],” says Ben Dolinky, chief broadcast/AV engineer, AMBSE. “We also have a safety protocol that the stadium has put in place with a health questionnaire that [staffers] must answer before getting access into the building. Once people are in the room, we’ve mapped out [one-way markings] with tape on the floor to keep that flow of traffic in the control room separate.”

Not only have there been changes to the control-room physical layout, but the team is adapting to the current circumstances by keeping the creative juices flowing. When this year’s logistical obstacles arose, the operations team went back to the drawing board.

“Technology is constantly changing,” Dolinky notes. “One of the things that we love to do is continuously innovate; we’re always looking for what’s next and how we can improve. Regardless of COVID-19, we’re always looking to push the envelope to enhance that game-day experience for our fans.”

Before the season, teams were wondering how to connect the players with fans who aren’t at the venue, and, when the preseason was canceled, the situation became more daunting. Despite the tough task, Manager, Stadium Productions, Julia Chongarlides and her in-venue production crew are exceeding expectations by delivering a multifaceted in-house experience.

“We like to bring a lot of energy by utilizing prompts and our PA announcer,” she explains. “We’ve incorporated a lot of unique elements as well. We’re doing whatever we can for the players since they’re our main audience right now. For our player introductions, we’ve asked family members to introduce them.”

Besides relatives, the franchise is tapping the greater Atlanta community to bring the energy while the stands are empty. Reached with the help of the Falcons’ community-relations team, local high school coaches and players are adding texture and hometown flavor to the defensive prompts shown on the video displays.

In addition, innovations include technologies that allow at-home friends and family members to be at the center of the action. For example, TVU Networks is helping the team display 25-50 at-home fans on the venue’s massive Halo board and four fans on the large mega columns at a height of 20 ft.

ATL, it won’t be the same without you today.

Until we can have you home, send us your favorite memories from game days at @MBStadium ❤️ pic.twitter.com/kHpcmKNw2b

“Julia and her team have done a great job of providing high-end content to our season-ticket members [watching from home],” says Dolinky. “We’re want them to feel like they’re still part of the game-day experience. It has been challenging but, at the same time, very rewarding when you see the excitement on the fans’ faces when they know that they’re on the videoboard or receiving that content.”

Despite the production team’s efforts to lock down a familiar script, new challenges arise with every game. The home opener on Sept. 13, for example, had no fans in the stands. This past weekend, the stadium hosted a gathering of 500 player families and friends. For the Oct. 11 matchup against the Panthers, the organization has announced that a limited number of fans will be in the seats. With these three home games so different from each other, the team is learning which elements work and discarding those that don’t.

“Our second game didn’t look anything like our home opener, and our third game won’t be anything like the first two games,” says Rish. “[This past Sunday] was a little bit of a trial run, but we’re continuing to learn and grow.”

The Ones Who Get It Done: Notable Names of Falcons’ Production Team 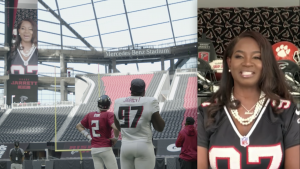 Fans, including family members who introduced the 2020 team captains, are displayed on the 101-ft. mega column at Mercedes-Benz Stadium.

Through the ups and downs of this season, Rish, Dolinky, and Chongarlides are maintaining in-venue integrity as much as possible. In addition, many others from different departments are pitching in to help on this large-scale effort.

Rish is assisted by Director, Entertainment and Live Events, Kelsey Gillespie. On the production side, Chongarlides has a group of individuals who make sure the show goes on without a hiccup: some have experience on the team, others have just joined it.

“[Graphics Producer] Kevin Nawoichik has carried a lot of the brunt of our motion-design work,” Chongarlides says. “We also have [Producer] Grant Tiberghein, [Graphics Producer] Garrett Hall, and [Production Coordinator] Carly Smoltz, who are new and programming our Ross Video XPression Tessera dashboard. [Producers] Steve Smith, Jada Meadows, and Chris Koch have put in a lot of work on all of the internal ‘know-as-you-go’ videos so that everybody is on the same page content-wise.”

Members of Dolinky’s operations team have been vital in supporting the new equipment that makes Chongarlides’s job a bit easier.

“Ryan Collins, our audio engineer, has done a phenomenal job working with Tameka, [Head Coach Operations Coordinator] Sarah Hogan, and Julia to make sure that everything sounds right,” Dolinky says. “[IPTV Administrator] Jim Blackburn has also been a great asset in ensuring that all of our TVU equipment is working.”

Overall, the entire team is focused on the task. For this weekend’s matchup against the Panthers, the environment may be different, but the people in the control room have done incredible work to get to this point and will continue to offer a premier experience during a year filled with twists and turns.

“Everyone has been all-hands-on-deck, and I’m really proud of that mentality,” says Rish. “We’re working a lot of hours right now, but I can’t wait until we’re on the other side of this and back to a stadium with 72,000 people in it.”‘