Nearly 100 staffers will be working in North America, Korea

Activision Blizzard Esports’ Overwatch League has continued to gain popularity over its three years in existence and has punctuated its freshmen and sophomore seasons with the Grand Finals in Brooklyn, NY, and Philadelphia, respectively. The 2020 edition, however, will not take place inside of a massive arena due to the COVID-19 pandemic. This year, teams will be competing in an online setting via a worldwide remote production workflow and a new virtual set. 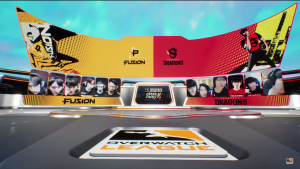 Blizzard developed a virtual set with the help of two Viz Engine machines.

SIGN UP for the upcoming SVG Esports Production Summit Virtual Series (Nov. 17-18) to learn more about Blizzard’s other esports production, the Call of Duty League, from Commissioner Johanna Faries!

Usually a spectacle with tons to see and do, the event has been truncated to an online viewing experience. Without a venue, the Blizzard team still wanted to give off the intense feeling of being involved in the final rounds of a championship tournament. Through the help of NEP and other production partners, players and talent alike will be housed in a virtual, three-dimensional environment that is constructed by two Viz Engine machines.

“The Finals have a complete virtual set with full integrated camera control and changeable dynamic, content on virtual LED screens,” says Pete Emminger, VP, global broadcast, Activision Blizzard Esports. “There are also pods near the bottom of the screen for talent and commentators that will be shown at their desk.” 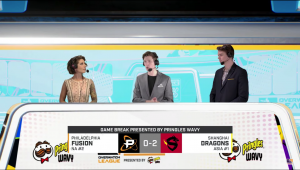 The position of Gschwind, Kennedy, and Larsson on the virtual stage.

In this 3D environment, the production team can flex their creative muscles in any way that they please with Viz Trio. For example, the set can be manipulated to show the theming of one specific team during player introductions, highlight a single team by inserting players in respective boxes in real-time, or bring in the on-air team of Jonathan Larrson, Soe Gschwind, and Scott Kennedy at the virtual desk for expert analysis. This may be a new wrinkle for this year’s Grand Finals, but an idea of a digital stage has been used as a concept art for what the physical stage looked like in 2018 and 2019.

“We needed so many of the same functions in a virtual environment as we needed for a live show,” he says. “We have a team that does graphics and LED set design, and they usually produce a rendering ahead of time, but this year, the rendering has become the show.”

Fans watching the action are playing a vital part in this new backdrop as well. Through various digital outlets, including the Overwatch League Twitter account, automated cheering is available for those that want to show their support from home.

“We’re also doing some fan wall engagement and interactive crowd cheering, so the more people that hit [a certain team’s] button, that’s the cheering that you’ll hear,” he adds. “We also have some other online fan engagement elements.” 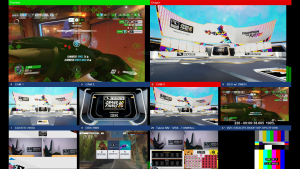 60 virtual machines are in play from North America and Korea.

From an esports fan perspective, the competition may seem scaled back without the in-person experience and other onsite amenities, but for the teams facilitating the work behind-the-scenes, the operation is the same if not, more complex than in years past.

During a pandemic-soaked 2020 season, onsite production with mobile units quickly transformed into remote and software-based solutions with staffers working from home. GV AMPP, Grass Valley’s new cloud-based SaaS production solution, was one of the main cogs to navigating this new working-from-home model.

“We had a roadmap to get to the Finals and we identified this about two to three months ago,” says Emminger. “We started changing components of our remote workflow as we went along, so that when we got here, it wasn’t a completely new environment.”

For this specific tournament, the production plan has grown exponentially to cover staffers located on two different continents. To avoid any potential latency issues, all four participating teams, two from the North American region (Philadelphia Fusion and defending-champion San Francisco Shock) and two from the APAC region (Shanghai Dragons and Seoul Dynasty), traveled to Korea to be in one location. While teams are playing, competitors will utilize TeamSpeak for in-game communication.

As for the split-squad production, a total of 60 virtual machines (40 in North America, including three production switchers and two replay servers, and 20 in Korea) will be retrieved and sent through NDI transport in the cloud to create a cohesive and sturdy foundation.

“AMPP is still a big part of our workflow around master control,” he continues. “To move into the virtual environment, we’re primarily around vMix and all of our observers are all virtualized in Korea, which we then access remote connectivity through Parsec.” 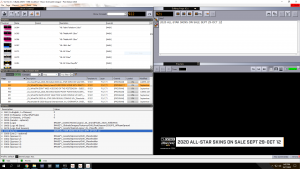 Viz Trio allows for full graphics control during the broadcast.

During a traditional broadcast, the production staff would have support on ancillary chores that needed to be done. In these current circumstances, they have now adopted an independent approach, which has led to additional broadcast challenges that they would normally never deal with. In the communications department, Unity Intercom is being used to speak to each other, but that system comes with a set of difficulties when you’re not in a single room.

“It’s a big workflow change for people who are used to truck panels in front of them and yelling at an operation that’s sitting next to them,” says Emminger. “We made a choice to keep everything fully isolated, so our talent are responsible for their own tech setup, starting the live stream, troubleshooting, and also muting/unmuting themselves during the show.”

It’s not only the onscreen personalities that need to adjust to this new method of production, Other members of the production crew are learning and handling roles that they aren’t doing during a pre-COVID show.

“We have people from our events team that are now working in our transmission and operations team,” continues Emminger. “For us, it’s not less work, but different work for some people.

One member outside of the actual production, Global Logistics Manager Jimi Croker, is dealing with an entirely different task. When contests were held at arenas around the country, he would be the individual that would make sure that all necessary equipment would arrive on time. For a global league, he would also handle the finer details of shipments made to international teams. Now, with his colleagues at home, his job has shifted to sending cameras, lighting, and other elements of their production kit, including to Gschwind, who is calling the matches from Switzerland.

But…I am looking at them 😀 pic.twitter.com/IInbnyMQIy

“He’s managing kits to 500 people, so he’s coordinating trucks and freight with UPS and FedEx,” says Emminger. “Customs has been pretty intense, but we had to get [Soe] all of the same supplies and equipment.

Together in Isolation: Blizzard Stays Connected Throughout a Topsy-Turvy Third Year

Prior to the start of the season, Blizzard kicked off the inaugural Call of Duty League season in Minneapolis in January and had high hopes for the new home-and-away era that launched in New York City and Arlington, TX in February, but COVID-19 put a wrench in those plans. 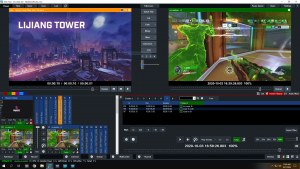 The North American team has two replay servers at their disposal.

Overall, it has been an interesting, yet exciting journey for the crew as they continue to grow an already attractive entity. While innovation and technological advancements are two priorities on the team’s to-do list, connecting with each other and establishing an open line of communication was paramount to maintaining team camaraderie as well as ensuring a smooth third season in the world of esports.

“Last year, we moved to Slack as a unified communication platform for the whole company and we also moved to Zoom to make some of our collaboration better,” concludes Emminger. “[This year,] we did a bunch of online contests like who has the best COVID hair. When you work at an esports company, we do lots of fun things and we encourage that because it gave people a little freedom to do creative things that they maybe wouldn’t have done in the office.”

The winner of the 2020 Overwatch League Grand Finals will be decided tomorrow, Saturday, Oct. 10 at 9 a.m. ET/10 p.m. KST. Tune into the Overwatch League YouTube page to watch the last match of the season.