“Doing a live event in a fully virtual environment was certainly a challenge,” says director/showrunner Justin Strawhand. “And adding in the additional layer of non-standard broadcast equipment is challenging in and of itself.” 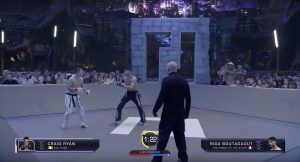 The second season, which premiered Sept. 24, features bouts in four virtual worlds rendered in real time in Unreal Engine, the Epic Games engine behind Fortnite and other popular titles (as well an increasing number of sports-broadcast applications). According to Karate Combat, its live-to-tape broadcasts mark the first time a sports league has blended real-time virtual effects with real-life athletics. 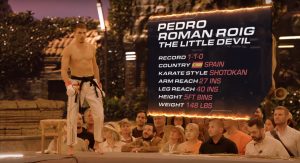 To combine the styles of cinematic and live event production, the production team shoots these events using ARRI cameras, as well as RED cameras for slo-mo capture. The feeds are sent to a mini flypack for the live-to-tape line cut, and the cameras also record to cards. The production’s main camera is a 50-ft. technojib, followed by two dollies on 30-ft. tracks and long zooms. Also included are an overhead camera angle in the truss on a two-axis head, a lock-off, several other manned hard cameras, and multiple B-roll cameras to capture the various set elements.

The non-fixed cameras are tracked with an optical system, capturing spatial, lens, and focus data for VFX integration in postproduction. 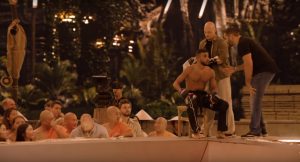 To create the virtual environment surrounding the ring, the production team built a massive green screen and freestanding set elements to merge with the virtual backgrounds.

Strawhand previsualized all of the camera positions prior to the event and then worked with Director of Photography Dániel Rácz to block out the action. Strawhand and his team also did a full Unreal Engine real-time previz to allow live reference on a second multiviewer.

“[Rácz and I had] worked on a few shows before,” says Strawhand. “He has an incredible handle on bringing a fresh eye to coverage. Merging a more cinematic sensibility with action that can literally happen almost anywhere is a bit of a mind-bender, but Danny brings the goods.” 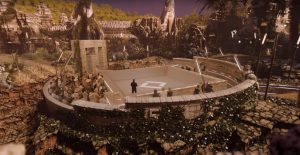 The virtual set is based on a concept described as a hybrid of an ancient Cambodian temple and Blade Runner.

The virtual set is based on concept art that Strawhand had worked on with Joe “The Artist” Guillette. Describing it as a hybrid of an ancient Cambodian temple and Blade Runner, he dressed the set to match the style — even going so far as to put accent lights on bamboo poles.

In terms of the live-production workflow, Strawhand directs the show, an AD initiates the walk-outs and crowd control, and Rácz serves as a de facto second director, talking directly to camera. Also on hand is an editor/TD doing a line cut and catching any framing issues for the live-to-tape productions. 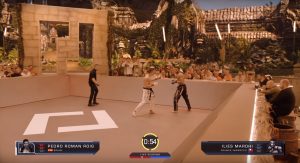 In addition to the optical-tracking team onsite, a dedicated Unreal team is on hand to process the real-time previz, and an on-set VFX supervisor is there to red-flag any issues.

The crew of roughly 60 drew on extensive film experience, having worked on numerous effects-heavy Hollywood films and shows (including Terminator: Dark Fate and The Witcher.)

“I’d worked with them before, and they were very excited to do something totally new,” Strawhand says. “Mixing broadcast and film crews can be a little dicey, but, as soon as people see the images, everyone gets on board right away.” 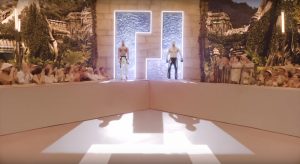 He cites his work with renowned boxing/MMA/combat director Rick Beczynski (including a jaw-dropping live event on the observation deck of the World Trade Center) on shows for Karate Combat as instrumental to perfecting the style.

“Rick brought in his live crew, and I brought in my film team (including LD Brandon Taylor),” Strawhand says. “We had to work hard to marry those two worlds: cinematic lighting, dramatic camera moves on cranes and dollies, and 24p film cameras, with the realities of live production. My overall goal is  to make “live cinema,” not just for preroll packages but for the entire event, blurring the line between movies and live broadcast so that people have to question whether or not what they’re looking at is real. Adding in virtual-production techniques was the obvious next step. 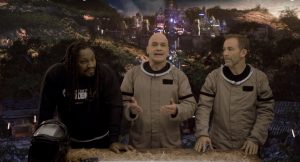 “In terms of the virtual production itself,” Strawhand explains, “once the gear is up and running, it becomes almost invisible. Seeing the composited images feels very natural and really helps with framing choices. As for compromises, I’m a big fan of haze and dramatic lighting, but the green screen demands that everything be a little more flat, so there are some trade-offs. At the end of the day, a fight is a fight, and you have to focus on the action. Everything else is gravy.”

The 12-episode season of Karate Combat airs weekly on Thursdays at 10 p.m. ET on beIN SPORTS XTRA with an encore presentation on Saturdays at 11 p.m. on beIN SPORTS.