Implementation of artificial audience audio — so-called enhanced crowd sound — across major-league sports since COVID-19 shut down most of televised sports in March is transitioning from a novelty to a business sector, evidenced by the number of independent companies moving into the market.

For instance, after the NFL developed its own system for crowd sound for its broadcasts, Fox Sports opted instead to deploy a third-party system from SonoFans, which is also being used for all MLB postseason broadcasts. The entire NBA season’s crowd sound was handled by Firehouse Productions, a live-event producer that created an array of sounds from the NBA’s own audio library and other sources as well as a content-management/playback system and hired and trained engineers to operate it. 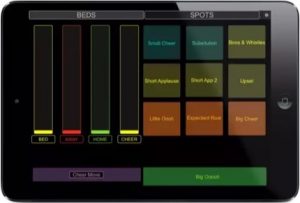 d&b Fanblock crowd-sound system is mixed via QLab or iPad.

The most recent entry into the pool is a joint venture of German sound-system manufacturer d&b audiotechnik and UK-based theatrical AV-rental vendor and systems designer Autograph Sound. The resulting crowd-sound system, dubbed d&b Fanblock, comprises an immersive-type multichannel PA system installed in a sports venue and focused on the field of play. It uses d&b’s immersive SoundScape processor and En-Scene software to build a virtual object-based signal-management system that lets artificial crowd sounds physically follow the action on the field, with reactions moving from one line-array hang to another, allowing, for instance, spectator chants to grow from one section before building out to fill the entire stadium.

Content, provided by FanChants, is managed through Autograph’s Stadium Sound software, which crowd-audio mixers access via QLab and iPads as the system interfaces. (FanChants serves mainly European sports; d&b Fanblock will rely on teams and leagues it works with in the U.S. to secure local content, according to a spokesperson.)

The system is scalable and can be put in any size stadium or arena. Its first full-scale use is scheduled to be UK football club Queens Park Rangers at London’s Kiyan Prince Foundation Stadium starting tomorrow.

To Animate Athletes and More

Fanblock is intended to energize the field of play, much as the NBA’s system, developed by Firehouse Productions, was focused solely on the courts at the Wide World of Sports arena in Orlando. Both systems are also capable of sending a separate feed to broadcast. Fanblock additionally is designed to send a third, mono feed to skyboxes, bars, concessions, and other back-of-house areas in arenas and stadiums. 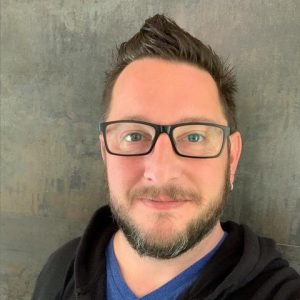 d&b audiotechnik’s Nick Malgieri: “In a post-COVID world, does it still bring value? I think there are a lot of situations where it will.”

According to Nick Malgieri, advanced systems specialist, d&b audiotechnik, technical needs for crowd sounds dovetailed with technologies that the company had developed for immersive event and concert applications, as well as with the theatrical sound-design expertise of Autograph.

“Our specialty is designing and deploying sound systems, not so much creating the content, whereas Autograph had that type of experience base already,” he explains. “It seemed like a perfect marriage for us to be able to partner the content-artistic side with the technology-platform side, so that we’re closer to a turnkey solution.”

Malgieri adds that d&b’s U.S. office is in talks with several sports teams and leagues about implementing Fanblock. NDAs prevent his naming names, but he says interest thus far is coming from professional and collegiate basketball, soccer, and football. Systems will be designed and components provided through d&b’s U.S. distributors, the same outlets that provided touring sound systems prior to the pandemic shutdown.

“Not all existing installations have the type of speaker format that we need for this immersive experience,” he says. “By leaning on our rental-company user base, we can get a local system to them very quickly. And getting the programming and content is quick because most of that’s digital delivery.”

Custom programming of the QLab/iPad interface is being done by Autograph. The goal is to keep operational complexity to a minimum, says Malgieri, with a GUI that allows control of volume, intensity, and types of crowd reactions. d&b technicians will design the dedicated crowd-sound PA system and program its software according to the geometry of each venue, so that audio objects populate, travel, and process in a manner similar to how a natural crowd would react to events on the field.

In addition, crowd-sound mixers — two are assigned per game — will operate separate “home” and “away” crowds, which in European soccer tend to occupy different parts of a stadium’s seating. Malgieri says it will not be a problem to adapt that approach to U.S. sports, where home crowds tend to dominate in stadiums and arenas.

Benefiting Fans in the Stands

Although enhanced-crowd-sound systems used this year have been either focused specifically on the field of play, as in the recently concluded NBA season, or intended primarily for broadcast applications, as for the MLB and the NFL — both of which allow generalized “murmur” tracks to play through the venue PA systems to give the stadium a basic sense of occupied stands — Malgieri says Fanblock is further intended to energize the few fans allowed into venues now, usually a fraction of their capacity.

“We think [that], for a period of time, we’re going to see restricted-capacity seating, to allow some patrons to come to the game but with social distancing,” he says. “We need to try to maintain value for that ticket. So much of going to the game is feeling the energy; that’s why you want to be there in person. To allow the audience to feel as though they’re within a larger audience is also a benefit of Fanblock.”

Aside from a desire to create come sense of normalcy during the pandemic, the entry of new companies in the nascent crowd-sound market helps meet the need to find revenue-producing applications for existing live-sound assets sidelined by the coronavirus, such as touring PA systems and technicians. Much of the innovation around artificial crowd sounds has come from live-sound companies, such as Firehouse Productions, SonoFans, and d&b audiotechnik. Furthermore, even after a workable vaccine is developed, it will take some time before venue seating can be full again, likely extending the need for faux-crowd sound.

“Even as we start to emerge from a COVID situation,” Malgieri opines, “I think, to a certain extent, organizations need to feel like they have this in their pocket. I think the lessons that we’ve learned in the business model with sporting events is that they can’t just be put on hold and rescheduled; they need to be able to move forward, even if there is some type of situation where they can’t have an audience or a reduced-size audience. And since the end of COVID is not clear, I think everybody’s planning for worst-case scenario. In the long run and in a post-COVID world, is there still a remnant of this? Does it still bring value? I think there are a lot of situations where it will.”

Agile, immersive sound systems deployed for crowd sound could also, he continues, contribute to new ways of using sound in live sports, such as allowing audio objects to follow video images around a venue’s ribbon boards, which could lead to development of more-sophisticated fan-engagement content for games.

“This will be a way of introducing [venues, leagues, and teams] to the capabilities of modern audio systems,” he says. “Fanblock can be a big foot in that door.”