GlitchCon 2020: How Twitch Created a One-of-a-Kind Virtual Experience for Fans in Place of TwitchCon

Each year, content creators and fans from across the globe flock to TwitchCon, the world’s preeminent convention for gamers and streamers. However, with the pandemic continuing, Twitch was in search of a way to bring its community together for a singular experience that didn’t include a large public gathering. Enter GlitchCon.

The virtual replacement for TwitchCon Amsterdam in May and TwitchCon 2020 in September (both canceled due to the pandemic), GlitchCon was a 12-hour marathon live-streaming experience offering 425 Twitch creators across four separate virtual stages — /twitch, /twitchpresents, /twitchgaming, and /twitchrivals — live-streaming a wide variety of content. 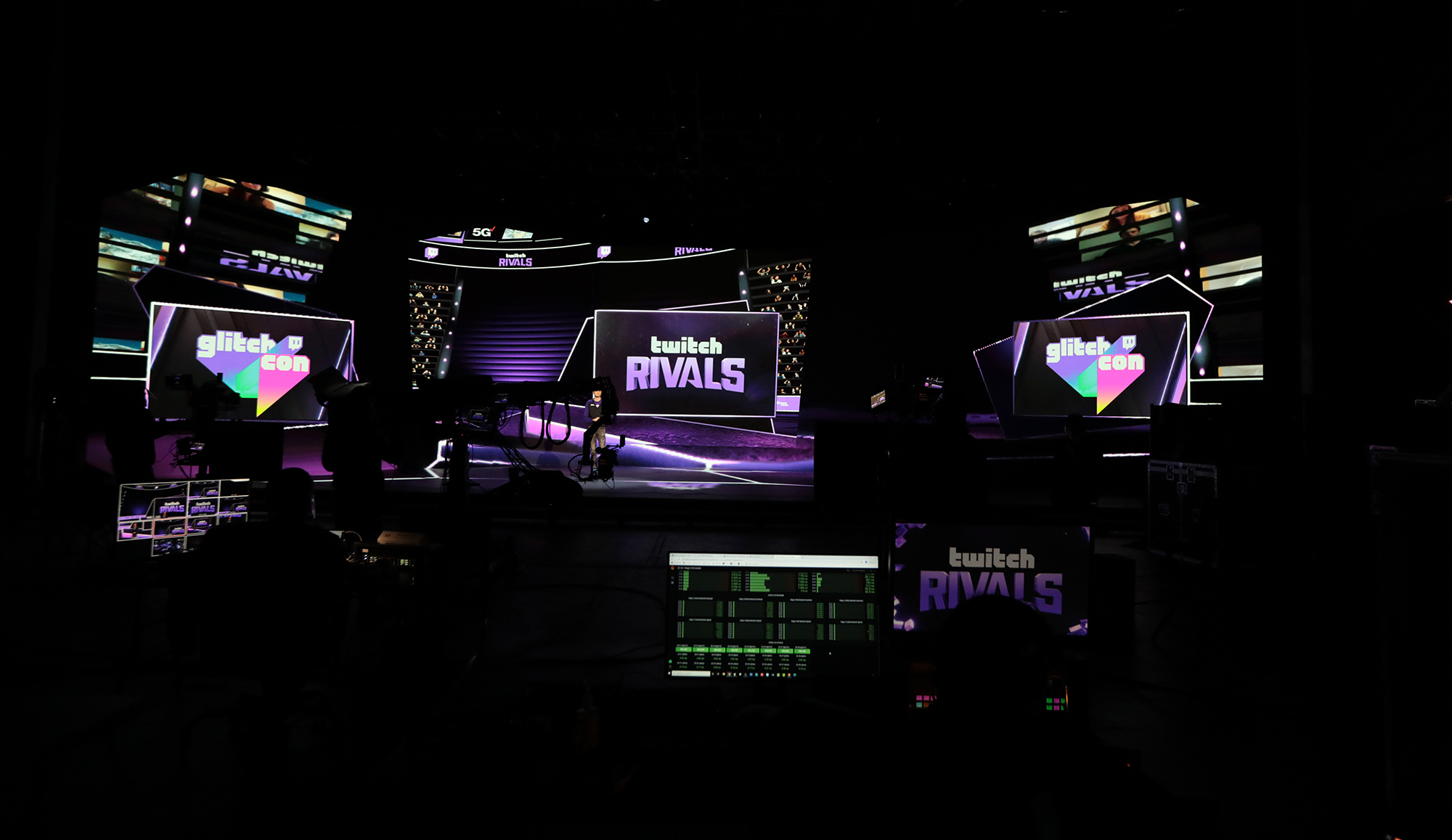 Twitch has relied on tools like NewTek TriCasters, VMix, OBS, and Discord to produce GlitchCon.

“The goal was to create a special experience for the core Twitch community, and we achieved that,” says Steven Flisler, head of esports and content production, Twitch. “The problem we were solving for was, how do we create four separate ‘virtual’ stages with different entertainment experiences but still unify them to have a common beginning and ending with a theme stitched together. We needed to mimic what our community knows and expects in person at TwitchCon but reimagine it for the Glitch of the year that 2020 has become.”

To achieve this goal, Twitch split its team up to focus on five areas: the four content channels and a fifth team responsible for the overall hub, keynote, and musical after-party. Each team was led by a senior Twitch Channel producer: Erin Schmalfeld, Callum Hanlon, Chris Ambrosio, Sean Keegan, and Cyrus Ghahremani. And the teams were supported by the Twitch Original Content production arm: Mitch Rosenthal, Matthew Lamos, Farnoush Ansari, Sean Sullivan, and Alex Solomita. 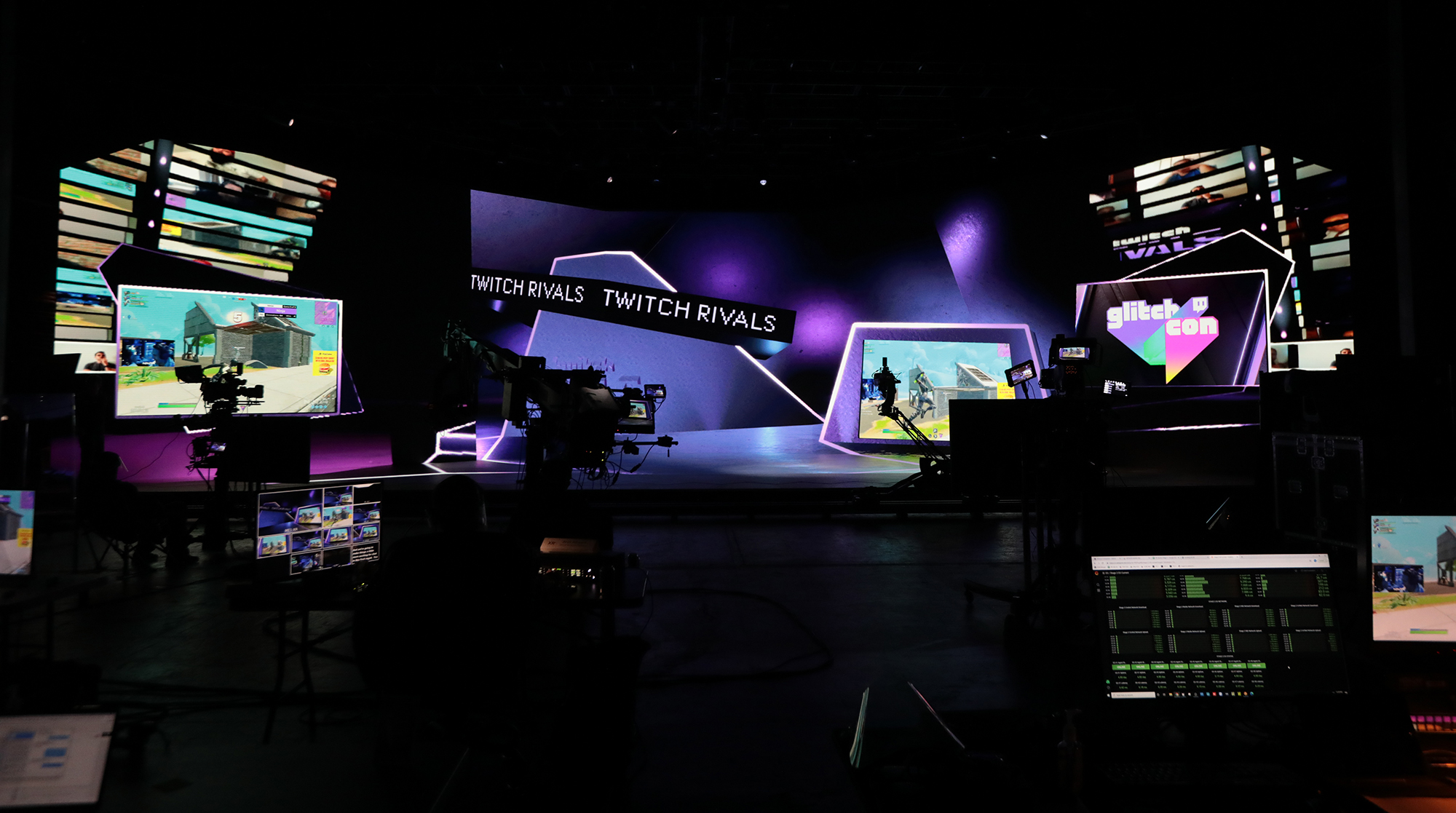 The team combined three production approaches to balance out the effort: well-known TwitchCon favorites like the Cosplay Contest and Artist Alley, existing formats from large content franchises of Twitch Gaming and Twitch Rivals, and new formats —each with a “glitchy” twist — developed specifically for GlitchCon.

“I often joked that we took eight months of work and fit it into eight weeks,” says Flisler. “The overall theme and content plan took some time to come to life to make sure it was perfect. Designing and executing the production plan happened incredibly fast, and we didn’t have time to pause.”

“All the elements of the flow of the show and how we were promoting across the shows and feasibility testing happened back to back, with some show mechanics being seen only during our dress rehearsal,” Flisler says. “We moved fast to ship a cohesive event experience, which forced us to right-size a lot of elements and, of course, make quick decisions to execute.” 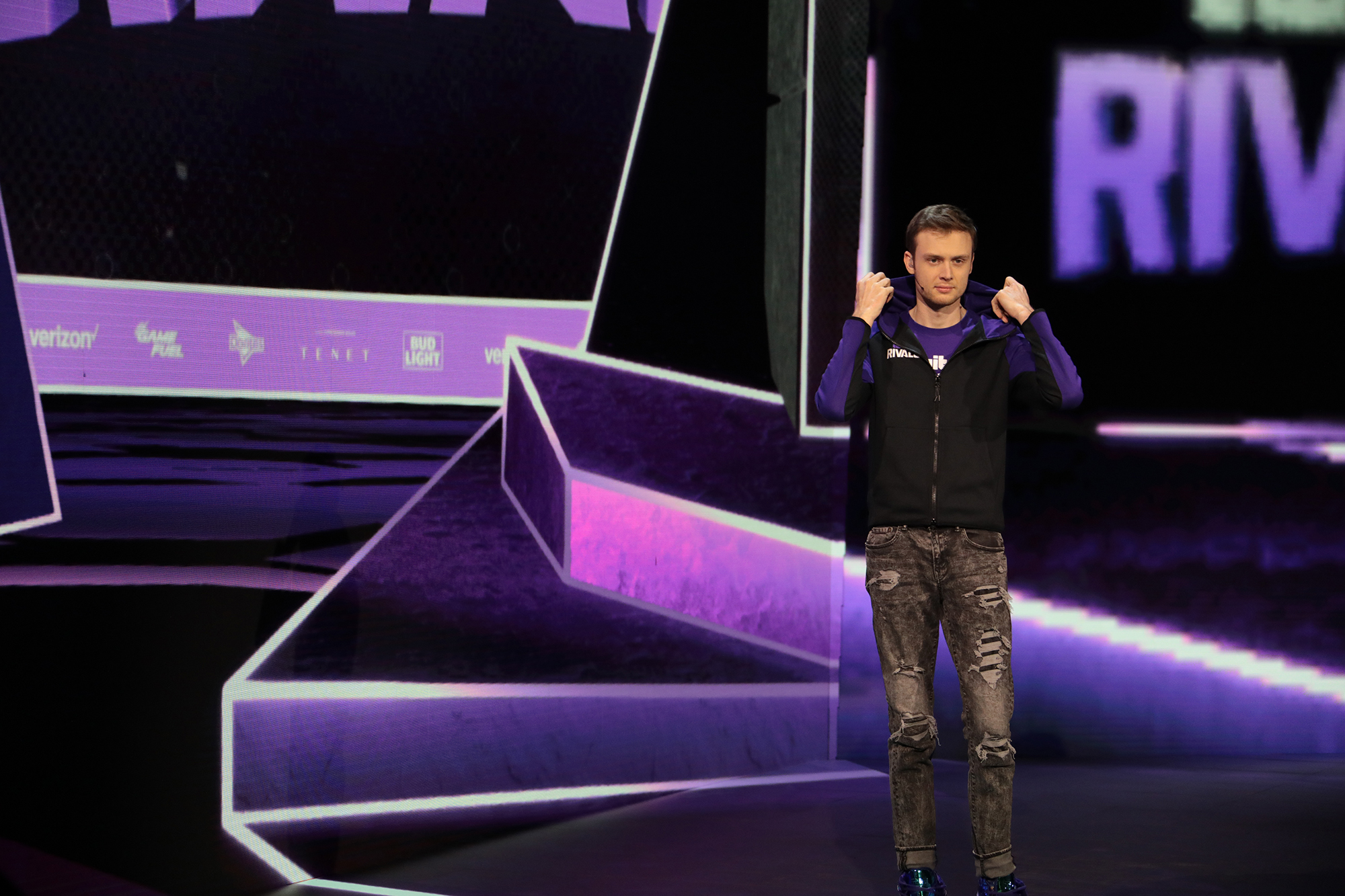 In addition to its in-house team, Twitch tapped existing partners Vindex/NGE and Butcher Bird Studios, along with new partners ADVNCR UK and ADVNCR Done & Dusted (AD&D) for a number of production services.

“When moving TwitchCon to an online experience,” says Flisler, “we saw an opportunity to test and learn with different partners and thought-leaders in the virtual-event and technology space to help deliver the most unique, immersive, and entertaining experience for our viewers. With such a high volume of content, we sought out different companies to help bring our vision to life for each of the marquee moments.”

For the Twitch Rivals esports channel, Flisler and company were looking to create a more immersive experience for the viewer and player. They built a Rivals Arena environment using extended reality (XR), which has seen exponential growth in esports, including the League of Legends World Championship earlier this year. The Rivals Arena included a Verizon 5G super suite with fans live-streaming into the arena, hundreds of fans as audience members with prerecorded reactions, and various video surfaces used for live gameplay, scoreboards, or other explainers.

“The XR technology has become more prevalent as of late,” says Flisler. “By partnering with AD&D, we were able to achieve a larger-than-life experience and elevate the ‘bedroom’ caster backdrop to a presentation that matched the magnitude of GlitchCon.” 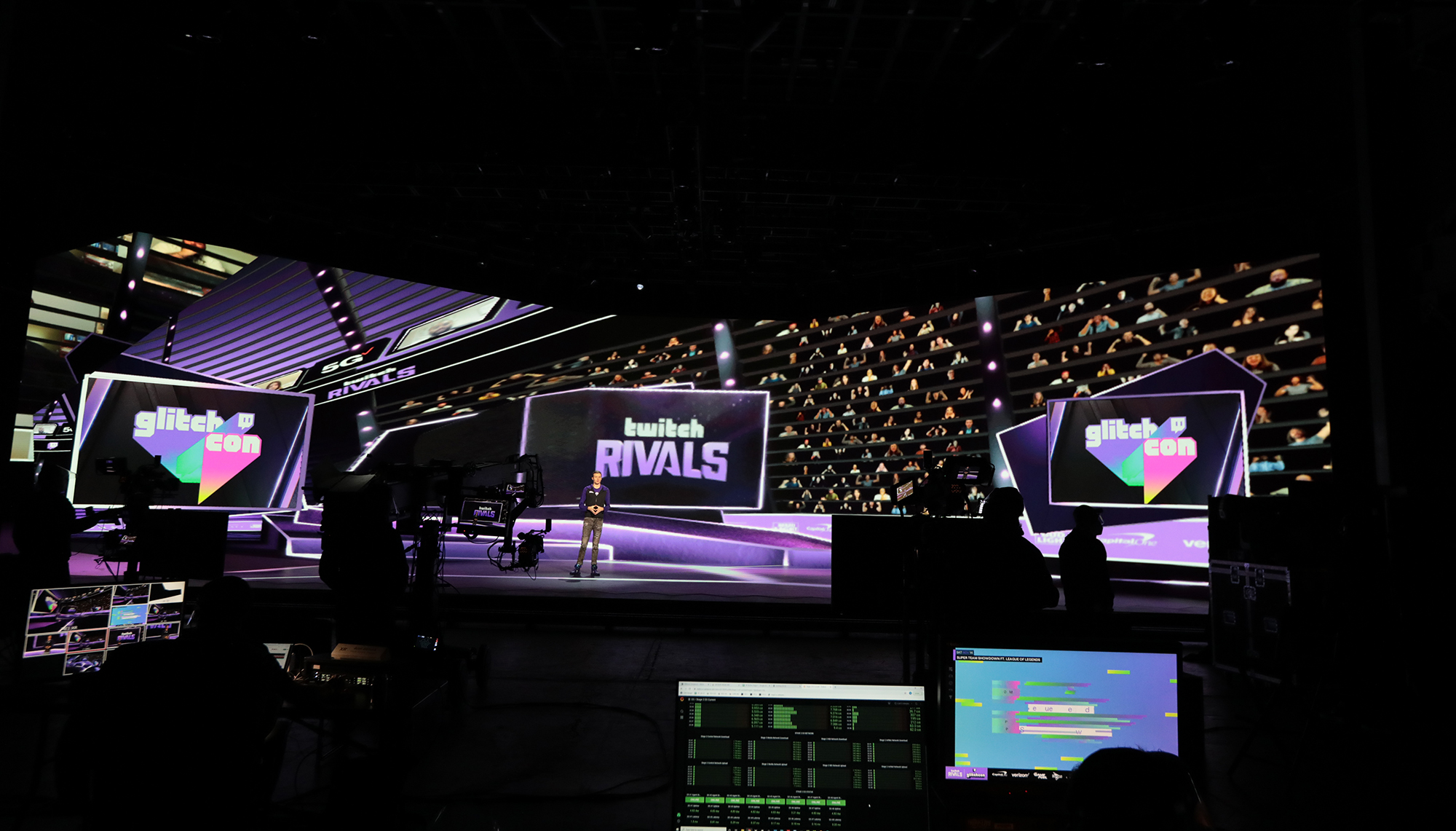 On the Twitch Gaming front, the production team worked with Warped World to build a custom top-down shooter game leveraging Unreal Engine, with key game-design decisions determined on-stream by fans via Twitch Chat. This game is set to be released for the Twitch community to download and play for free.

In all, Twitch had 20 content segments across the entire GlitchCon event. According to Flisler, in a “normal” world, one of those shows could be considered a full day’s work and a single production team’s focus.

“Dealing with so many different creators across different time zones and languages was a Herculean talent-logistics effort,” he explains. “Coordinating so many different vendors, some of which we worked with for the first time, takes a lot of trust. And there were a number of new technologies that were untested going into the live event. It also took courage as a company for Twitch to leap into such an ambitious project with so many unknowns but knowing that we wanted to deliver something truly great for our community.”

From a broadcast-production standpoint, the Twitch production team used a number of tools it has relied on since even before the pandemic forced changes, including NewTek TriCasters, VMix, OBS, and Discord. Flisler and his team built a master control to handle the four channels and the fifth production chain that included the GlitchHub. 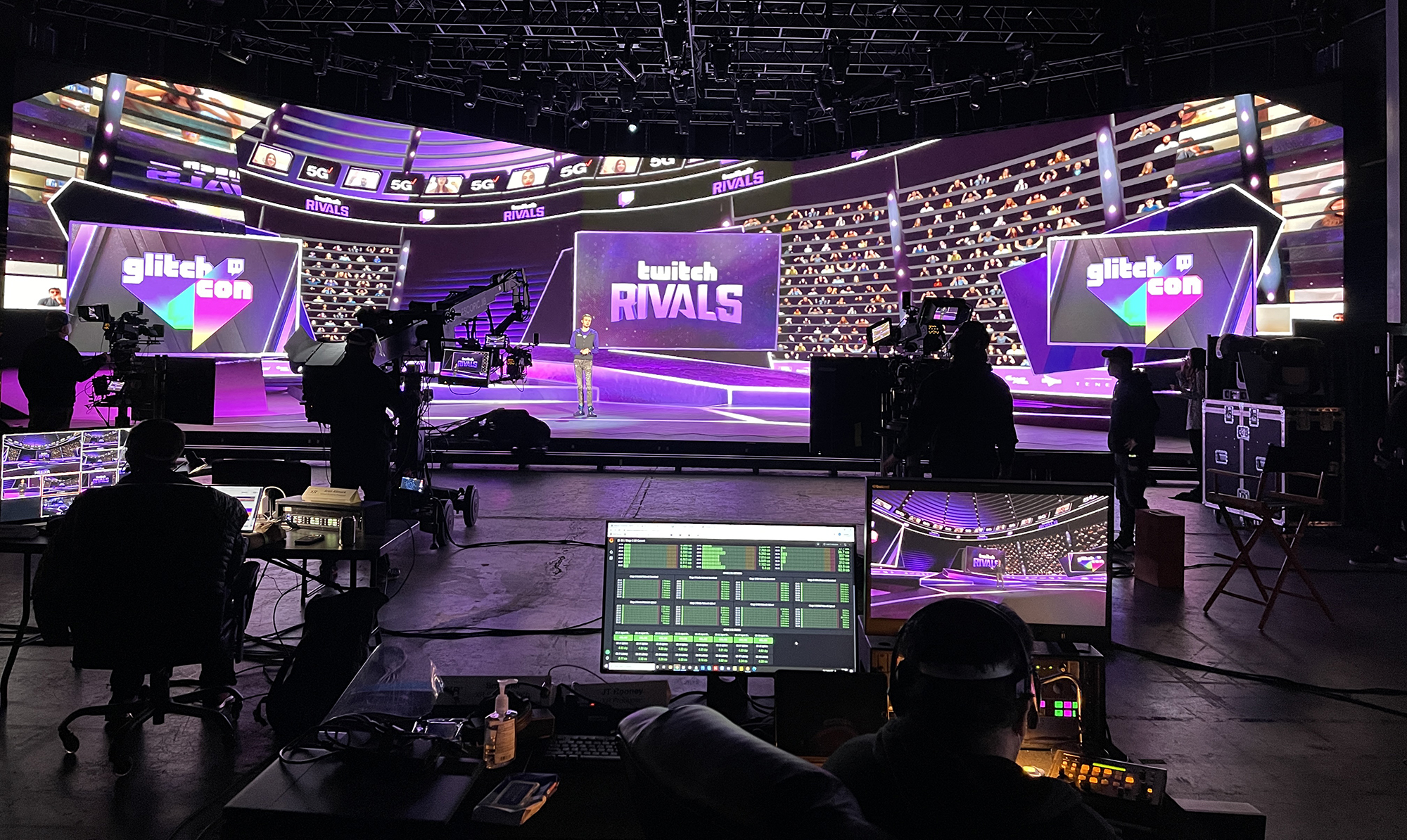 A virtual audience (seen in the background here) was integrated into the Rivals Arena stage.

“Much of this was reminiscent of tried-and-true approaches in broadcast television, which was reminiscent of my time with NBC and how we would use [a bit more complicated] version of a master control to traffic regional and national sports across the network and our affiliates, all with detailed contingency plans and flexible show formats that could collapse or expand based on the live content unfolding on screen.”

In addition, Twitch has looked to build on the monumental effort made to produce Twitch Stream Aid in March, including cementing its virtual-green-room workflow using a communication flow funneled through Discord.

Twitch also deployed a Unity intercom system for essential communication between production lines and engineer teams, with Discord voice and chat channels for communication with talent and guests.

“TwitchCon is a physical experience about in-person interaction and exhibition,” says Flisler. “Putting the brunt of the experience into an online context and storytelling form factor changed the dynamic of how to execute this and achieve success. Specifically, for GlitchCon, this was an unproven quantity that took a leap of faith from everyone involved.”

All streamers and show hosts. with the exception of the Rivals Arena host, were located remotely. The crew was split between primarily remote production and certain core functions based in the studio at various partner facilities. In all, Twitch had seven production units across five production studios’ facilities. Given the nature of each content segment, the production team decided what was necessary for an in-studio presence, such as its Twitch Gaming End of a Console Era (which required a full-size time capsule in a studio) or Twitch Rivals (which needed to be located on a stage to execute the Virtual Arena), or the Loot House for Twitch Presents with the chat-controlled merch house. 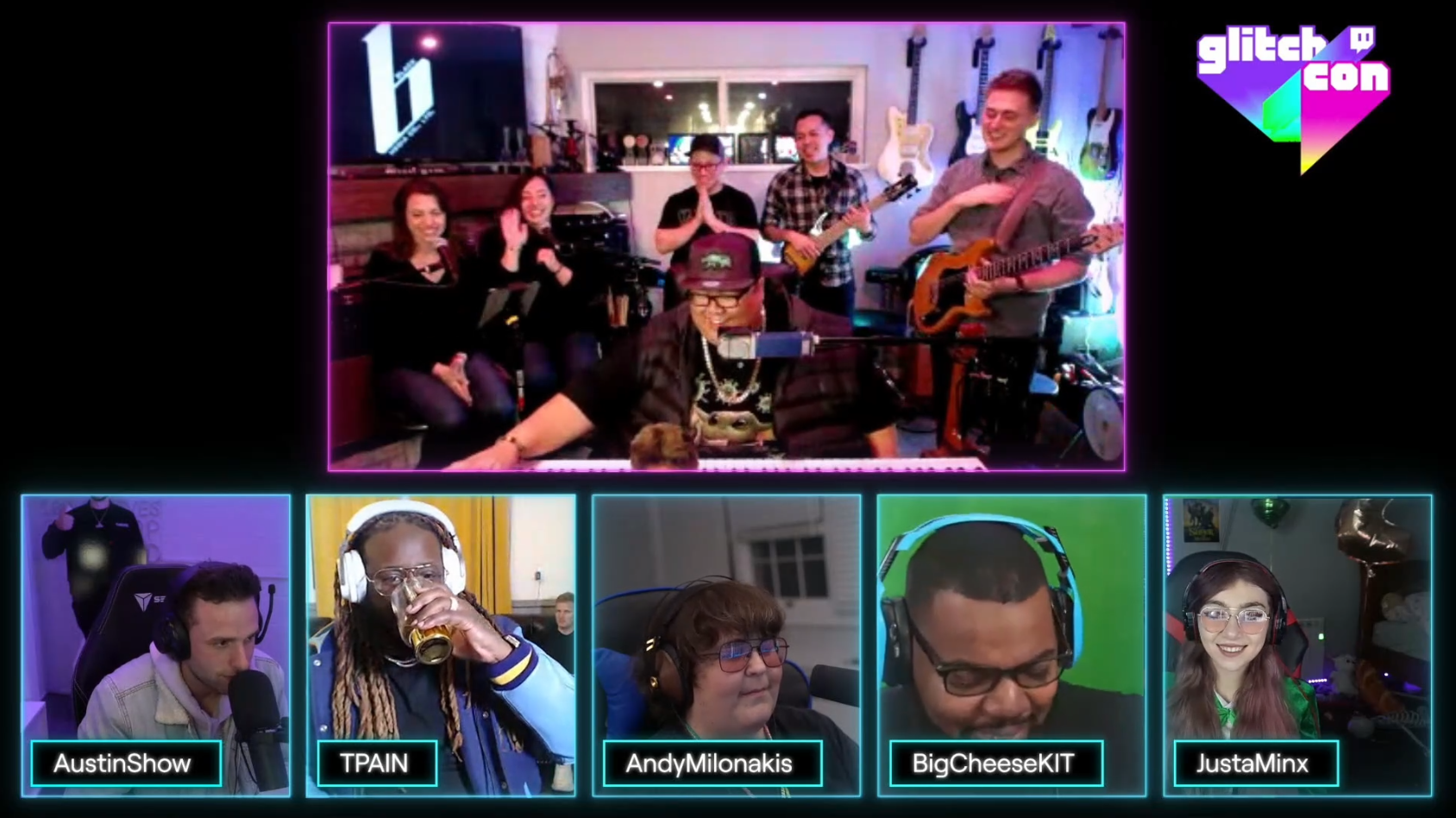 All streamers and show hosts, except the Rivals Arena hosts, were located remotely.

“It was a massive undertaking of different proportions because everyone was remote,” says Flisler. “Because we knew we didn’t want to just transfer the experience, we started with a creative approach around a portal that transports you to the Glitch, which meant dealing in an abstract world for much of our preproduction. This added even more layers of complexity to design and implement all these moving pieces.”

In addition, the majority of the 400+ Twitch creators used their existing at-home streaming setups. In certain situations, Twitch augmented camera and lighting setups and augmented special-effects tools (voice mods and AR filters) for a portion of the creators.

“While it sometimes presents a challenge that there is not a uniform kit across creators,” says Flisler, “we do have a benefit that our creators are full-time streamers and fluent in high-end video production. It’s both daunting to have so many custom moving parts but also really exciting in what makes Twitch content so special when we partner with so many talented content creators. Our production crew in many ways extended to our streamer talent.

“The privilege we have,” he continues, “is that we often have to produce only half of the show because our talent streamers do the rest. Our focus becomes building the stage for the streamers to bring the best version of themselves. It comes down to simple storytelling and clear implementation of technology, and, with such a complex project like this, we fall back on [whether] this an amazing and clear experience for our creators and the viewers.”

GlitchCon proved an unqualified success, drawing more than 6.7 million viewers overall and maxing out at 175,000 concurrent viewers. Although the community was unable to unite in person at TwitchCon, GlitchCon helped fill the void by creating entirely new experiences. And, while the hope is, of course, to return to in-person TwitchCon in the future, the groundwork laid by Twitch over the past eight months has also paved a path for the future

CLICK HERE for a look at the GlitchCon broadcast.

“Twitch has been breaking rules from the beginning and doing things differently,” says Flisler. “By taking on this daunting challenge and completely reinventing and reimagining the TwitchCon experience for the current state of the world, it reaffirmed what our DNA is all about: we take on the unknown in pursuit of incredible multiplayer entertainment.”