UK’s National Film and Television School (NFTS) is standardizing its postproduction, content delivery, and storage operations on EditShare’s EFS open shared storage solution and FLOW media management platform. By replacing its aging shared-storage platform with a mix of on-premise and cloud-based technologies, the prestigious NFTS, one of the world’s leading film, television and games schools, will increase productivity and more efficiently manage and share the content being created by staff and students. 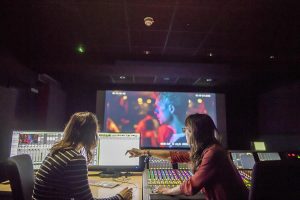 Founded in 1971, and based at Beaconsfield Studios in Beaconsfield, Buckinghamshire, England, the School offers more than 30 post-graduate level courses across the film, television and gaming disciplines, including camera operations, directing, cinematography, sound, script supervision, and production accounting. The School realized it needed to update its current system, while implementing open, logical, and automated methods of file and project management.

NFTS has always taken pride in its earlier reputation as a “slightly anarchical” community of filmmakers, but just as that culture over time settled into a more organized and formalized environment, its technology and production infrastructures needed to follow suit, according to Doug Shannon, head of IT for NFTS.

“When I began here, there was no network,” said Shannon, who brought a professional background in post-production when he joined the School 20 years ago. “Everyone simply passed hard drives around by hand. We needed greater consistency and a more open production environment. Initially we moved to simple, departmental servers. Then, five years ago, we first moved to dedicated shared editing storage, but that system had come to the end of its usable life, with the support contract becoming unsustainably costly. It was time to move on.”

In addition to continually enhancing productivity and efficiency, NFTS is focused on giving its students a diverse educational experience with hands-on access to the latest generation of production tools used by professionals today.

“We aim to emulate real life as much as possible,” Shannon said. “Our students come here already knowing what they want to do, so they work with teams of specialists, much like any professional environment. It’s less about technology and more about helping people work to achieve their best within each role.”

NFTS was looking for an open media management and storage foundation to easily allow the use of multiple creative editorial and finishing tools. The School will use EFS and FLOW to support a range of connected solutions for editing, grading, animation and more.

“Companies have realized they have to be open,” Shannon said. “The proprietary world is gone. For us, openness was both an assumption and a requirement.”

He added that the EFS and FLOW systems help production teams adapt quickly to the different camera systems NFTS uses from Arri, Sony, RED and Blackmagic. “For example, FLOW supports formats in a clever way and doesn’t have to break up RED files into blocks.”

Security and remote collaboration were also key factors especially with the School and the rest of the world still in some phase of COVID-related lockdown. “We needed something to help us work beyond our physical boundaries and give us the ability to look at rushes when working remotely,” Shannon said, adding the virtualized version of FLOW and AirFLOW are the perfect match for the School’s fast-turnaround production and review cycles. EFS underpins the on-premise and remote production workflow with best practice security file tracking to answer who did what and when.

With the EFS system in place, total shared editing storage at NFTS has increased from 490TB to 2.2PB, more than enough to meet the School’s current and even future requirements.

“Our enrollment is quite small at 500 students per year and we don’t see those numbers growing exponentially, so it’s an easy equation,” he said. “Most of our workspaces are around 10TB and an average film is 5 to 10 TB, with around 120 films in production and post-production at any one time. Also, using the Ark storage software is the easiest way to back-up an entire project. EditShare gives us a complete media production workflow. Everything you need for a film is there.”

“EditShare has worked alongside universities since its inception and understands the unique and highly diverse needs of faculty and students and have purpose built, yet open, solutions that sustain the academic setting while mimicking a real-world situation,” states Robin Adams, vice president EMEA sales, EditShare. “This insight and crafted solution, paired with EditShare’s cloud innovation, will help teachers and students hurdle the unprecedented challenges this year has brought and continue to connect, teach, learn, and create amazing together.”