An esteemed broadcast and mix engineer with multiple Grammy, Emmy and Peabody awards under his belt, John Harris built his career by anticipating the needs of his clients, while delivering the best possible recordings and mixes for a range of A-list artists, television broadcasts and live events. For 30 consecutive years, he has been the music mixer for the Grammys — the preeminent music industry award show. Additionally, he’s recorded artists including U2, Metallica, Eric Clapton, Paul McCartney and many others. This year, during a time where much of the world has gone remote, Harris has set up a state of the art, remote mixing environment with Neumann monitors at his home in Burlington, NJ. 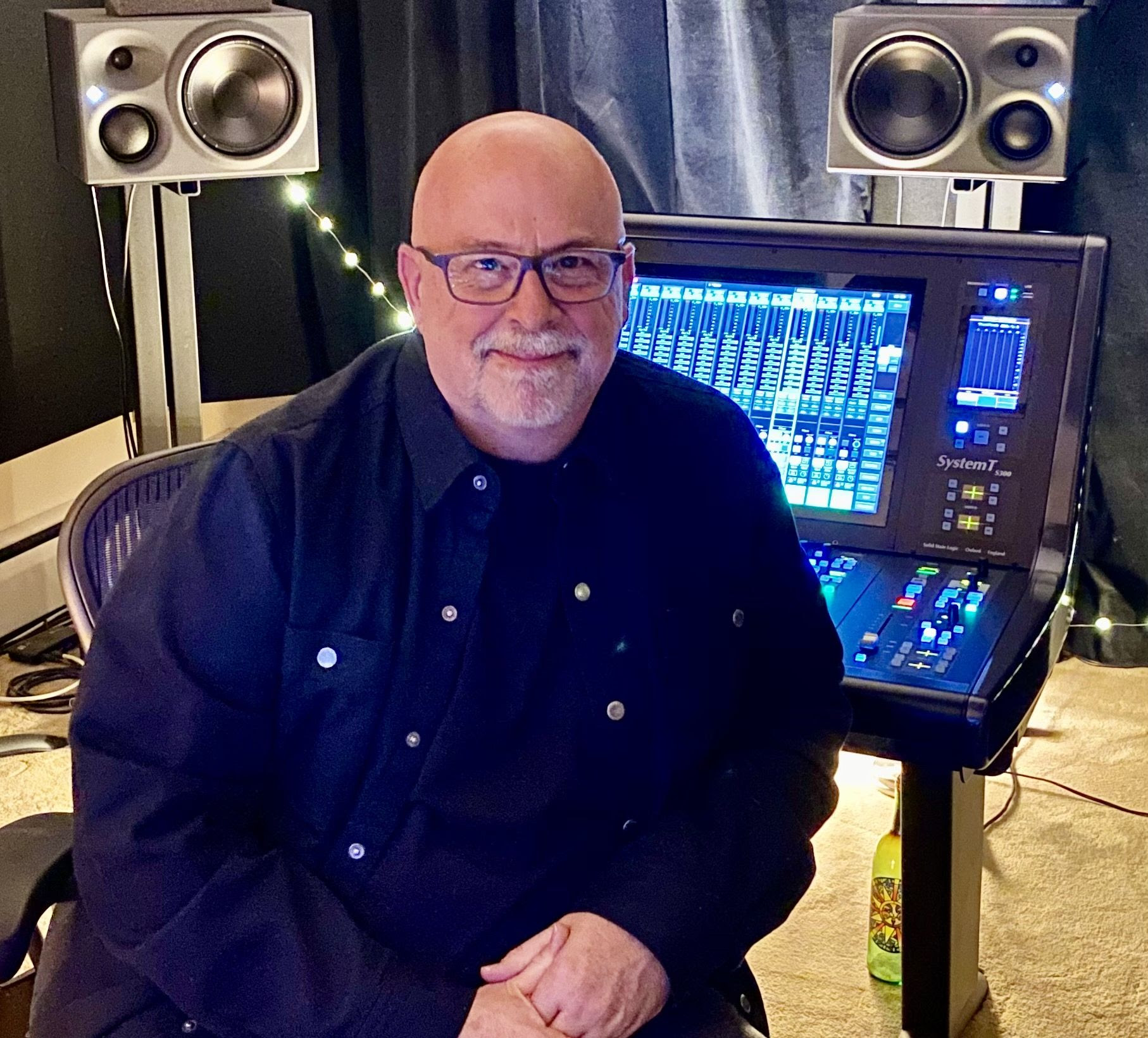 Since the pandemic hit, audio engineer John Harris has been working from home in his new 5.1.4 mix room, exclusively featuring Neumann monitors.

Harris and his creative partner, Jody Elff, who is a Grammy Award-winning audio engineer, sound artist and designer himself, have spent the past several years discussing what could be possible if music were to be mixed in real time over vast distances — from literally anywhere to a network of fixed base mix rooms. “What would that do for our industry?” Harris asks. “The industry of remote recording has changed 100-fold since I started, and it has become very specialized — it comes down to you and your art, and how you create your best.” Harris’ art is mixing live television, and what he has been doing for more than three decades.

The pair began pursuing their new endeavor HEAR in earnest last year, leveraging existing technologies such as the Internet, proprietary switches, VPNs and other ‘commoditized’ connectivity infrastructure — with the goal of delivering perfect recordings and mixes to remote clients. “The system we have set up basically consists of two components: one is to control the machines on the other side, and one is to hear them properly,” Harris explains. “Our controllers are so fast that you can really get the feel of a live remote mix so you are making fluid movements.” Once the pandemic hit in March, their new business model was put to the test with real world challenges and Harris wasted no time implementing his new monitoring environment.

In what used to be a bedroom in Harris’ home is now a top-flight, state of the art 5.1.4 mix room. “I have a complete 5.1 system and four height monitors — everything is Neumann active monitors,” says Harris, who wants to help push forward the broadcast market for multi-channel audio. His new system consists of (3) Neumann KH 310 monitors at the front left, center and right mix positions, (2) KH 310s in the rear, and (4) KH 120 on the ceiling, set up in a rectangular array — all pointing toward the mix position. 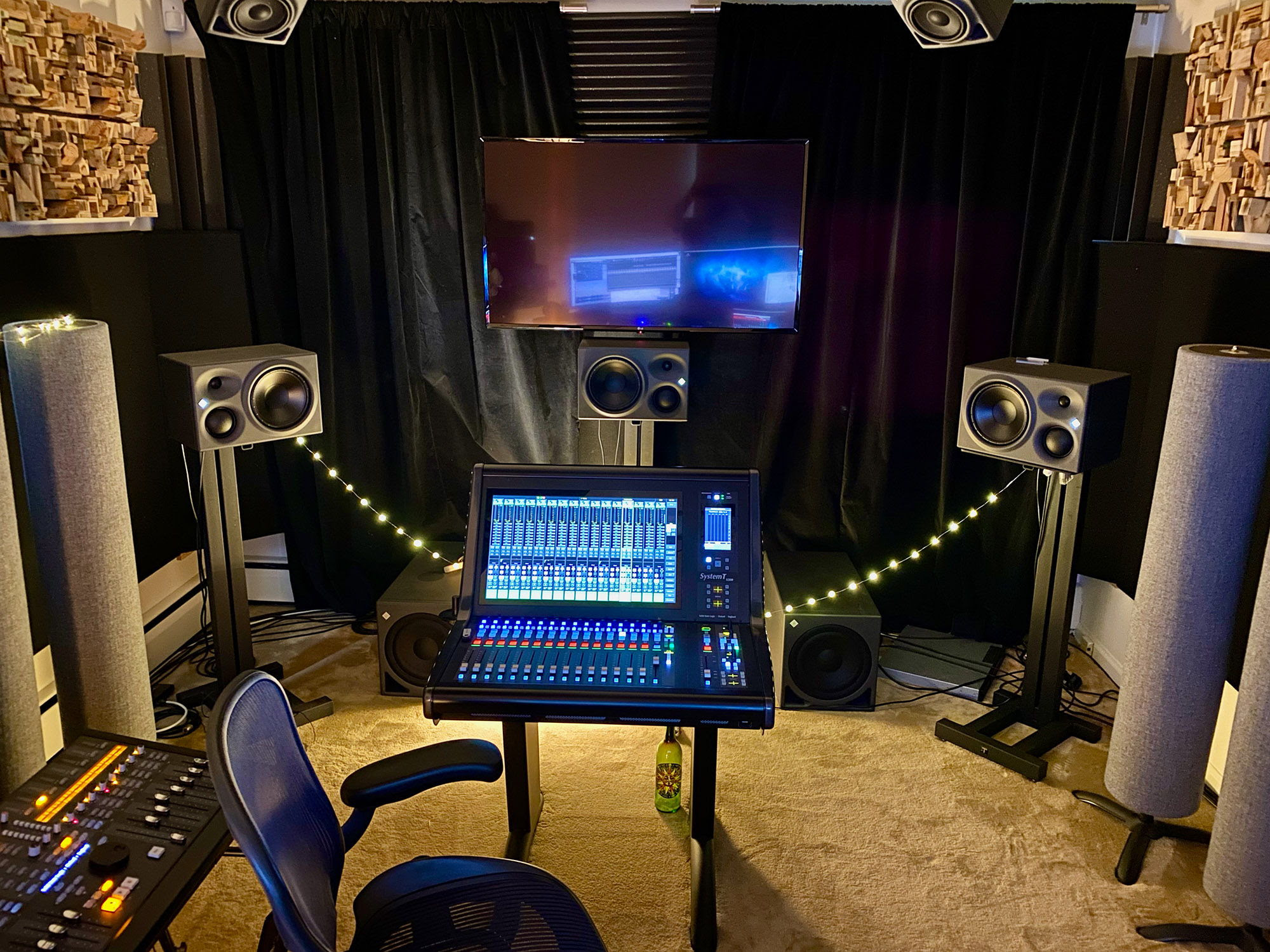 Harris’ new mix environment sets the bar for what is now possible for remote, multi-channel, broadcast audio. “My goal here is to demonstrate that we are no longer limited by location-based facilities,” says Harris. “I want to get people excited about how we are able to deliver all the needed components to the artist and monitor and create in an ideal environment — and to a Dolby standard.”

To facilitate their remote recordings, Harris and Elff FedEx Pelican cases to the recording locations — which can be sent to professional facilities — or more often than not, a personal home. Each case contains a six-space rack with recording hardware and software, as well as microphones. “They roll the case in, power it up and plug the internet in,” says Harris. “When the client turns it on, our switches see it and immediately we are able to control everything — we talk to them on their headphones as if they were in a studio. The systems always function as a “recorder” but also function as a mixer that I control with hardware controls — not a mouse,” Harris continues. “If the goal is to be live, it will output my mix to streaming, a network, or wherever it’s needed in real time.” Once the recording is done, Harris says the audio uploads to a secure site and in about 20 minutes Harris is able to access an entire multi-track and start re-mixing, continuing the process from where he left off.

Neumann and Sennheiser at the helm

When contemplating speaker choice for his mix room, Harris looked no further than Neumann:

“I have had a pair of KH 120s for a long time and I’ve always loved them. I built it this room from a blank slate, and I thought, ‘If I could do anything what would I do?’” Harris says he got advice from a friend, multiple Grammy Award-winning Eric Schilling, who recently set up his own multi-channel mixing array at his place in California. “I think there are 19 speakers in all, and Eric told me they were all Neumann — KH 310s, KH 120s and KH 810 subs. He couldn’t say enough good things about them, so that helped solidify my decision.”

Harris reached out to Tim Moore, Relations Manager at Sennheiser, during the planning and selection process for the room.  “John and I have been working together for years, and we’ve worked on dozens of projects together — but usually on location at live events. It is exciting to see him leading the way with the new remote working methodologies to better serve his clients.” says Moore. “There are so many possibilities that this can hold for the future in how live events can be produced and delivered to the market.”

While he was installing speakers and tuning his room, Harris became acquainted with the Sennheiser HD 820 closed back headphone. “I did two or three projects where I did the whole thing on these headphones, and every single person I shared those projects with said, ‘This sounds incredible and is exactly what we wanted!’, so any translation worries I had went away.” Now, with the monitor installation complete and after the room tuning, he mixes on both loudspeakers and headphones. “I’ve come up with this amazing hybrid monitoring setup,” he says. “Now, the same confidence that everyone had from my headphones, I get out of my speakers. The HD 820s will tell you if the bottom end of the mix is right.”

Now that he has his monitoring environment is set up properly, Harris can get down to business. “As long as I know that what I’m hearing is the same that other people will hear, then I’m good and can stop worrying about the equipment and just mix.” Currently, he is working on a project that will appear on HBO Max, and a tribute to jazz great Charlie Parker for Jazz Foundation of America.

Despite the pandemic, Harris feels well connected with his peers and is happy with his Neumann mix array: “I feel more in touch with the audio world than I ever have, and I am getting great results from these monitors,” he says. “My phone has been ringing off the hook — everyone is talking, being creative and coming together as a community. There are just not that many events yet, but we are ahead of the curve though and we are ready.”

NBC Sports Network to Shut Down By End of YearBetMGM Rolls Out Sports Betting, iGaming Mobile App in Michigan