When Theatrical Sound Designer Lew Mead from Autograph A2D was tasked with integrating a high-end wireless intercom system for the Fellowship for Performing Arts (FPA), the company turned to Pliant Technologies’ CrewCom to deliver a road-ready solution. Since FPA’s acquisition of the Pliant system, the production company deployed CrewCom for a range of productions based on the renowned works of C.S. Lewis, including “Paradise Lost,” “The Great Divorce,” and “The Screwtape Letters.” 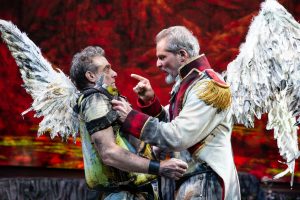 “Autograph A2D’s 15-year history has been dedicated to bringing audio and communication solutions to the theatre and equipping some of the world’s best-known musicals with top-of-the-line innovations,” says Lew Mead, managing director at Autograph A2D. “We were searching for a dependable system that can easily be taken out on the road for FPA’s touring productions and Pliant Technologies’ CrewCom intercom proved to be the right solution. We took the system out on our most recent tour and it was a huge benefit that CrewCom seamlessly interfaces with any house system, regardless of the manufacturer. We look forward to getting back out on the road with our CrewCom system as soon as we can.”

In addition to the system’s flexibility, Mead found CrewCom to be a great solution for large, Broadway-style venues. “We found that in all large venues we have worked with, the CrewCom system always works throughout the building. The range on this system is incredible and the coverage never disappoints. It’s rock-solid and has a great interface, and I have really enjoyed using it. CrewCom also makes it easy for production personnel to pull into any sort of situation and it simply works right out of the box.”

For “Paradise Lost,” “The Great Divorce,” and “The Screwtape Letters,” Autograph A2D deployed eight Radio Packs (RPs) for the crew as well as two Radio Transceivers (RTs), which were connected to the Control Unit (CU) backstage. “We set up the system with all of our wireless microphones,” adds Mead. “This way, all of our RF areas would be in one place so the A2s on the shows were able to seamlessly monitor everything that was going on backstage.”

Additionally, Autograph A2D and production personnel at FPA found the audio quality of the CrewCom system to be second to none. “We’ve been blown away by CrewCom’s crystal-clear audio quality,” says Mead. “Also, the RPs are lightweight and compact, and users can use them with their own headsets, which will be especially important once productions resume as people don’t want to wear a headset that someone else has had on their head.”

Mead’s experience with the Pliant system has been outstanding, and he looks forward to deploying CrewCom when FPA’s productions resume. “When the world opens back up, we’ll be deploying CrewCom on another show called ‘The Most Reluctant Convert,’ which is the story of C.S. Lewis himself—his biography. We also have plans to extend into the college area further down the line, which we are really thrilled about. With CrewCom’s simple-to-use interface, we know that this will be a great system for students to deploy as the learning curve is small. Pliant really knocked it out of the park with CrewCom.”