As the SVG Summit does every December, SVG Summit:CONNECT brought the world of broadcast sports together over Zoom instead of over cocktails at the New York Hilton. But the effect was the same: a robust exchange of ideas as the industry approached the finale of a remarkable year.

Audio was very much on the table. Not surprising, since sound — or the lack of it in largely COVID-shuttered stadiums and arenas — was the silent hallmark of the early days of sports’ shutdown. Then things became quite noisy, as networks and sports leagues and teams rapidly developed a slew of systems for producing “enhanced” crowd-sound.

‘The Distraction of Empty Stadiums’

In fact, it was the initial “silence of the stands” that compelled broadcasters to address the need for some kind of encompassing sound for games on television.

“There are many kinds of philosophical and editorial points of view,” he continued. “[Such as,] do you want the authenticity? You have the unique opportunity to hear more from the field than ever, but we thought it was important to make sure we had that.” It created, he said, “a meaningful difference in how you experienced [a] game on TV.” Ultimately, he concluded, artificial crowd sounds “remove the distraction of empty stadiums.”

Bose went on to point out that the German Bundesliga had been an early participant in what would become a massive audio undertaking throughout sports globally. “Our friends at Fox [Sports] connected us with them,” he added, underscoring another aspect of sports during the COVID era: the remarkable collegiality between the various networks and league offices. It was a theme that would surface often during the Summit. 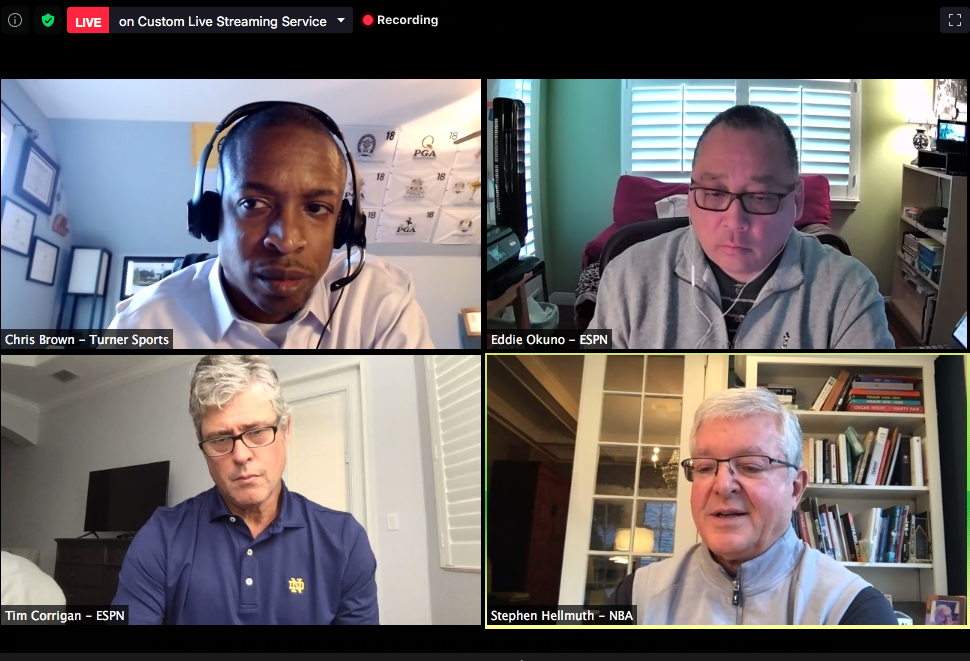 It was a similar narrative for the NBA, whose artificial fan noise gave psychological boosts to players. During the session “Inside the NBA Bubble With ESPN and Turner Sports” — which featured Turner Sports VP, Operations and Technology, Chris Brown; ESPN Senior Coordinating Producer Tim Corrigan; and ESPN Senior Remote Operations Specialist Eddie Okuno — panel moderator Steve Hellmuth, EVP, media operations and technology, NBA Entertainment, noted, “The players told us to turn it up. The virtual fans gave us the sense that there were fans there. The sounds come from the home teams, so it’s as real as it can get.”

The NBA will continue to use enhanced crowd sound when it begins its 2021 season in January, Paul Benedict, VP, broadcasting content management, NBA, confirmed for SVG. That and other crowd-noise platforms will be part of what Corrigan described as the industry’s “spirit of access and growth and innovation that we want to bring forward. We’ll figure it out because that’s what we do.”

Golf had a unique experience with live sound this year: golfers wired for sound or near open microphones found that, without the masking noise of crowds around them, their occasionally expletive-laden banter might make it to air. As Mike Francis, VP, remote engineering, CBS Sports, put it to the panel during “Inside PGA and The Majors 2020,” “Would you want to wear a microphone while you’re playing golf?” — a query that drew knowing laughter.

But, as with other sports, the intimate sound from the links is drawing viewers in, and most profanity can be contained with delays.

“Fans clearly enjoy it and love having the access,” said David Dukes, senior director, technical operations, PGA TOUR Entertainment. “Most of the challenges come from the logistical standpoint. It’s a very individualized decision [to wear a microphone], and, right now, it’ll be used on a limited basis. We’d love to do more of it, but it’s something that the players will have to get more and more used to. They’re naturally nervous about putting themselves out there for that long, but it definitely gives fans some insight.”

“It’s technology that’s changing production philosophy,” he asserted. “As you get that great sound from the course, you need the announcers to lay out.”

Added Dukes, “It’s a combination of announcers and players. Some [players] are more chatty than others; some are gonna be more quiet; some are going to be more entertaining to listen to. It’s that give-and-take that the announcers are going to have to read and understand who’s likely to jump in where.”

Tennis also had its own unique moments when it came to crowd sounds. Patti Fallick, managing director, broadcast, USTA, found that, while tennis players largely ignored artificial crowd sounds, getting a good balance of appropriate sounds was important for the broadcasts.

“Everyone has very different feelings about crowd noise, and finding the right balance was a challenge,” she said, adding that the community that broadcast sports comprises — including SVG as an important hub for knowledge dissemination — made the challenge manageable. “We accomplished that really by all of the information we were able to gather from everyone who had gone before us.”

Among other takeaways from the Summit, the NFL’s Bose raised another key point: the intensive shift to home-based REMI production models put a new premium on intercommunications between staffers working from a combination of venues, offices, studios, and home bedrooms and basements.

“Communications was the revelation,” he said, referencing the NFL Draft, which this year was famously done from Commissioner Roger Goodell’s basement.

Looking forward, sports professionals expect to retain enhanced crowd sound as part of its audio toolkit for the 2021 seasons and even as their environments become more normalized. The NBA’s Benedict told a Summit panel that the new season for basketball will be “a different kind of challenge.”

“The beauty of the bubble was that it came with a one-size-fits-all model, a degree of uniformity,” he said. “Now there’ll be 29 arenas, some with fans, some not. It’ll be more difficult to standardize things across the board. We want to start slowly and evolve from there.”

Benedict also voiced what many broadcasters have noted as the ultimate conundrum of sports without crowds: would natural sound — and the accompanying epithetical verbiage that’s part and parcel of any competitive sport — be enough?

“Audio was really a key learning from the bubble,” he said. “We went back and forth on it for a long time, and there were some real conversations about what it would be like to not pipe in any audio. But is the world ready for R-rated sports? We’re not quite ready for that.”

The DTV Audio Group’s Thursday-afternoon Summit event was typically both sprawling and focused. About a dozen or so technical experts chimed in around DTVAG Executive Director Roger Charlesworth’s agenda, which focused largely on how future technologies and functionalities of Next Generation Audio (NGA) will integrate with the imminent ATSC 3.0 broadcast environment. 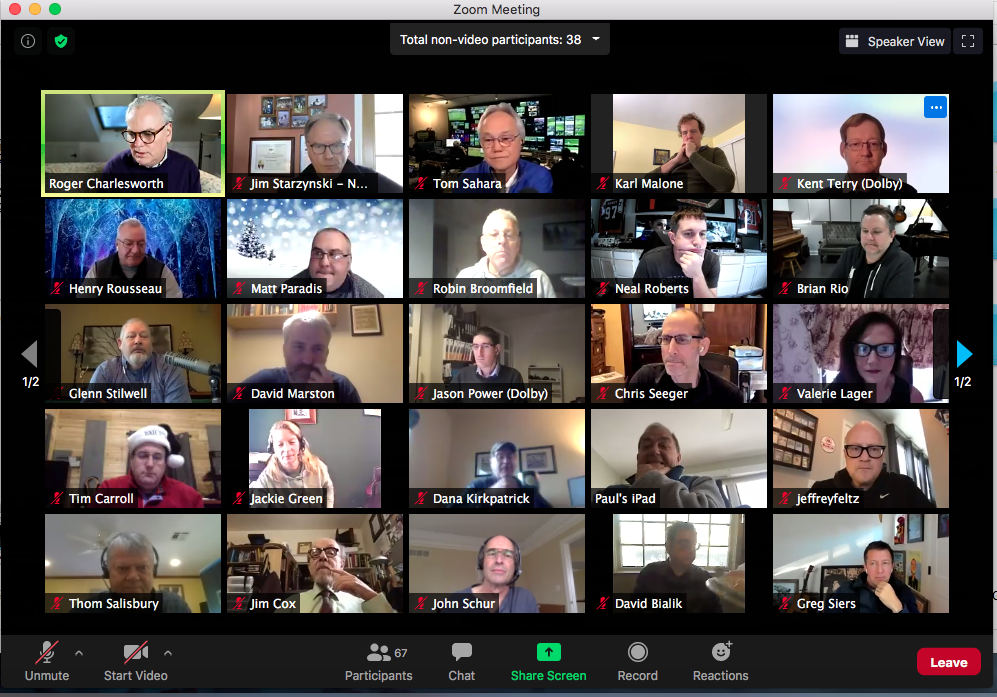 Participants in the DTV Audio Group’s event focused on Next Generation Audio.

“Immersive audio seemed really far away, but now it’s being done,” he said as part of his introductory remarks, citing such capabilities as personalization and optional audio channels enabled by platforms like Dolby’s AC4 and Fraunhofer’s MPEG-H. “There has been great work being done around Next Generation Audio, and, in some organizations like the BBC and Comcast and Warner Media, we’re seeing the beginnings of coming to terms with these features coming to consumers. The idea of personalization is something we really need to come to grips with. It’s time to take this out of the lab and experimentation settings and begin to talk about it in practical production terms.”

SVG Chairman Emeritus Tom Sahara, former Turner Sports VP, operations and technology, noted that, although development of the technology to support immersive and other NGA audio platforms has evolved rapidly, related regulatory and administrative issues, such as consumer privacy, compelled some caution.

“Much of that has now been resolved, so the process will be allowed to accelerate,” he said, adding that automated and virtualized production capabilities and techniques will soon allow broadcasters to “tailor customized products for viewers,” such as optional commentary channels and new kinds of viewing angles. “Each viewer can have their own version” of a production, able to choose languages and features such as audio description (AD) for viewers with hearing challenges.

Reviewing current SMPTE standards for NGA IP transport — ST 2110-30 (Audio over IP) and ST 2110-31 (AES3 over IP) — Kent Terry, broadcast and media systems engineer, Dolby Labs, noted, “These standards are mature, well-tested, and available in products now. Together, they support all transport and legacy I/O requirements for current NGA use cases in broadcast.”

Both he and BBC Senior R&D Engineer Dave Marston also touched on the Audio Definition Model (ADM), an ITU specification of metadata that can be used to describe object-based audio, scene-based audio, and channel-based audio. He referenced work on the audio for Casualty, a BBC One medical drama, which, for viewers with hearing problems, permitted isolation of key sound effects, such as the beeping of a medical monitoring device on the show, to reflect its importance to the episode’s narrative. In another instance on the show, the POV of an actor portraying a nurse with hearing problems was processed as though the rest of the cast were being heard through a hearing aid, to give viewers a sense of what that experience was like.

“You can hear what she hears,” Marston said. “It’s a valuable alternate point of view that conveys a feeling of inclusion.”

Although European broadcasters have been at the leading edge of integrating many NGA elements into their workflows, Jim Starzynski, director/principal audio engineer, NBCUniversal, cited the increasingly sophisticated implementations of NGA-type elements in domestic television productions, including NBC Sports’ use of Dolby Atmos platform for the past three years of Notre Dame University home football broadcasts and for the Olympics.

NGA appears closer than ever to becoming reality, but now that it’s beginning to enter the workflow, the trickle may soon become a torrent.

“Personalization took 10 years to get anywhere,” Sahara contended, “but expect highly personalized feeds to come in about the next five years.”