The NBA 2020-21 season tips off this week, and Paul Benedict, VP, broadcasting content management, NBA, and the rest of the team at the league are looking to build off of lessons learned in the WWoS bubble earlier this year and get back to the business of playing games in 30 arenas. 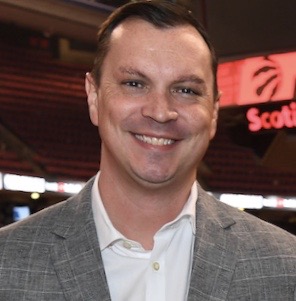 “NBA’s Paul Benedict: “We are focused on getting the season off the ground and then adding things as we go along.”

“We’re excited, and it’s nice to be back in NBA buildings as it brings some familiarity to the production,” he says. “Right now, we are focused on getting the season off the ground and then adding things as we go along. Once we get past the Christmas games, across the board, we will look at where we can get more creative and what opportunities we have. The biggest tentpole will be the playoffs.”

Health and safety protocols still top the list of priorities, and Benedict notes that some of the arenas will be more challenging than others, given that some will have fans, some arenas will begin to share the building with an NHL team in mid January, and other factors.

“Things like announce locations can’t have a one-size-fits-all approach,” he says, “but they will be able to get as close as 30 ft. to the court and will have plexiglass in front and dividers.”

There are also continuous conversations with regional sports networks and the national networks concerning things like baseline cameras and minimum camera complement.

“Many RSNs want to enhance it. In Phoenix, for example, the network will control three manned cameras,” says Benedict. “We have health and safety guidelines to allow handhelds to get close to the floor.”

He notes that something everybody wants is more access to players, coaches, and even referees.

“We had an extremely positive reaction across the board to the ref review system in the bubble, where the crew chief would clarify a call,” he explains. “We have purchased kits that will be in every arena at the start of the year.”

Other enhancements in the NBA bubble — such as the Railcam, Cablecam, and free-throw–line extended courtside camera — are also expected to be carried over to some of the arenas.

“Railcam had positive feedback,” Benedict says, adding, “We will have Railcam at Staples Center in Los Angeles and Barclays Arena in Brooklyn to start the season.”

Some of the developments that are making the transition from the bubble to the arenas were decided on with input from the players and the National Basketball Players Association (NBPA).

“It has been very collaborative with the players,” Benedict notes. “They told us to make the crowd audio louder as they liked the sound of it. At the NBA arenas, it will be advantageous: I went to the New York Knicks preseason game, and they crushed it with a soundscape that had the organ and fan chants. Some of the audio will be handled by Firehouse, and they are much more sophisticated.”

Virtual fans are expected to be used by some of the teams and also look for the scoreboards to allow for animations, which traditionally have not been allowed.

“It’s cool creative,” says Benedict, “and it will add atmosphere in the building.”

One innovation in the bubble, touchless postgame interviews, won’t make the transition to real-world arenas. In September, the teams were able to start offering headsets to players.

“That will make it a little easier,” adds Benedict. “The team PR and an A2 will have the headset and give it to the player, who will then look at a camera either below the rim or at center court.”