The Tennessee Titans shocked the National Football League by stunning the top-seeded Baltimore Ravens in last year’s AFC Divisional Round. With a reversal in roles pitting the squads against each other in Nashville’s Nissan Stadium, ESPN is blowing out its coverage of Sunday’s Wild Card Game with a total of 57 cameras to capture every play, a heavy onsite presence, and a MegaCast presentation spanning five linear channels and ESPN+.

“There are so many options out there to watch this game,” says Steve Carter, senior operations manager, ESPN. “We want as many eyeballs on the screen as possible, and whatever we can do to pull in more people to watch the game is the ultimate goal.”

All 17 Monday Night Football productions were nothing to sneeze at, but, when it comes to the postseason, ESPN’s production and operations teams take their talents to the next level. Inside the stadium, all angles and vantage points of the game will be covered by 57 cameras of all varieties. 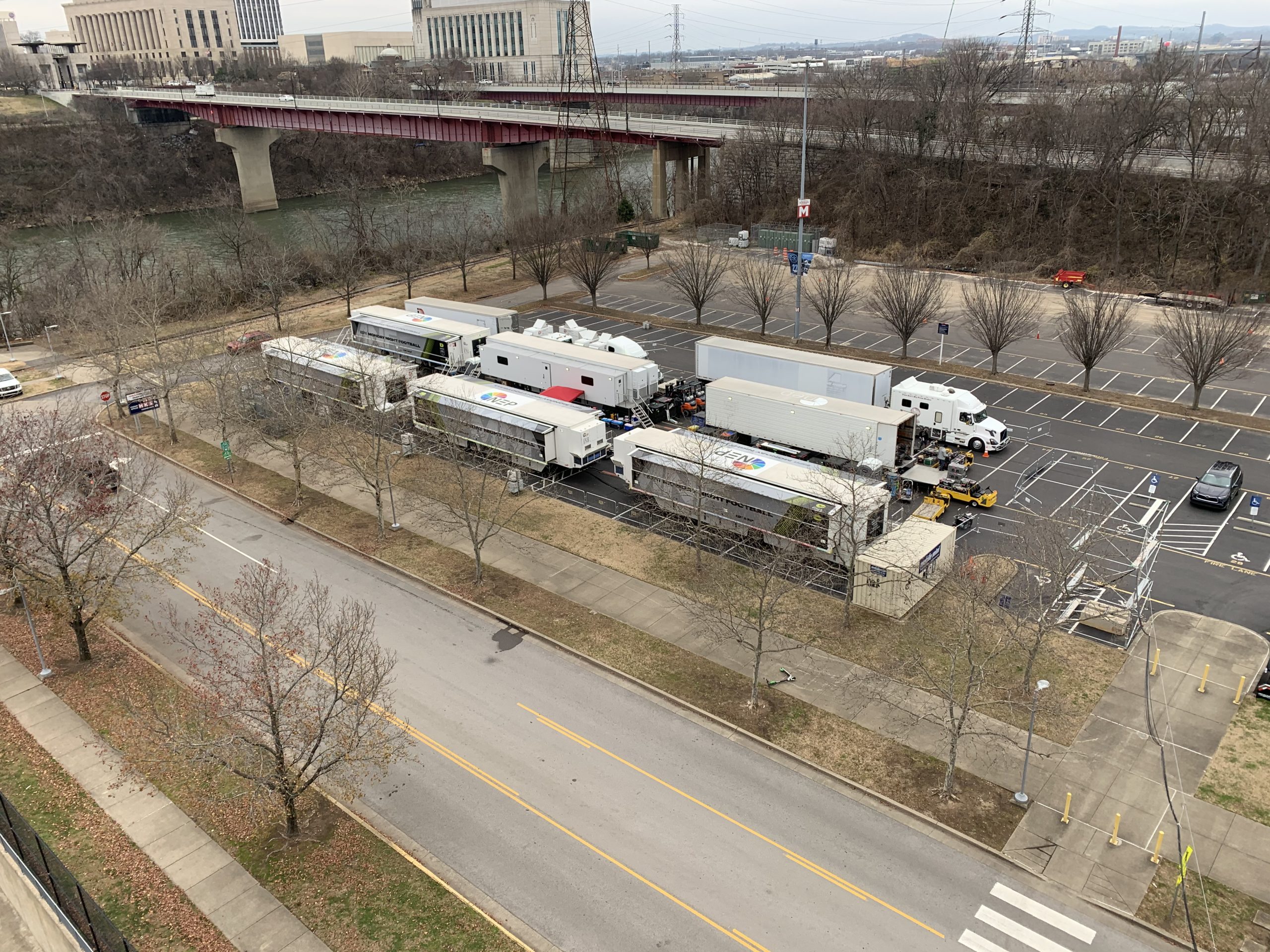 Given congestion in the loading dock, ESPN’s truck compound will be located in a parking lot adjacent to Nissan Stadium.

Two robotic cameras will be placed near respective goal lines and fed into a Sony PWS-4500 server for high-speed shots in 4K. In addition, the team will be armed with nine Sony HDC-4300’s with super-slow-motion capability. Those will be dispersed in both hard and handheld locations. Lastly, a camera will derive from the tunnel to shoot the players coming out to the field.

Introduced at the beginning of the 2019 season, the line-to-gain camera (which is coupled with Marker Cam in the first-down marker) has provided a new angle on close plays leading to a potential first down or a critical stop on fourth down. This technology will be further enhanced for this game by the virtual first-down line that adorns the field on regular plays.

Numerous technologies will make a return to the Wild Card stage. As a crucial part of the broadcast, PylonCam (16 robos on each side of four total pylons) will be positioned in the end zone. A Steadicam operator will patrol the field, and an aerial camera system will provide sweeping wide shots in Nashville.

Social distancing has become a priority since the beginning of the pandemic in March, and, this weekend, it will cause a ton of vehicular traffic outside Nissan Stadium. The NFL will shuttle players to the venue in waves of more than 10 buses. With the loading dock at maximum congestion, the broadcaster is implemented an onsite plan that places the truck compound in a nearby parking lot. 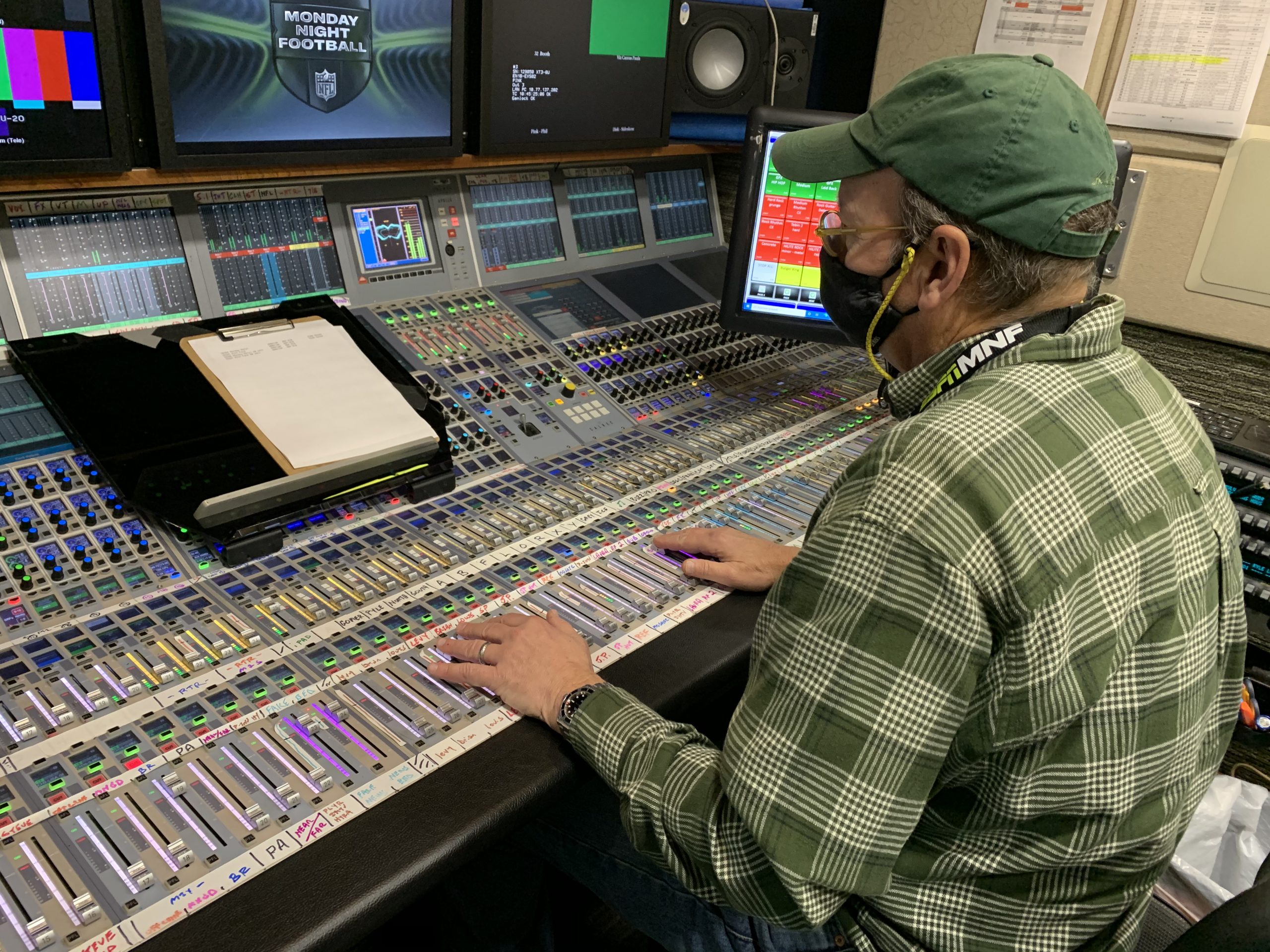 Lead audio engineer Scott Pray at his position in the truck

“Parking in the loading-dock area will be a bit tight,” says Carter. “We’ve never done this in Nashville, but we made the decision to move outside of that area and put the trucks up in a parking lot and then run fiber down into the stadium. We need space, and this will give us that opportunity.”

The move will force the crew to be farther from the stadium, but it will guarantee that space needed is available at all times. ESPN’s usual production truck in the regular season, NEP EN1 will house the bulk of the 150 onsite staffers in its A, B, C, and D units. Even so, COVID-19 protocols have pushed some crew members out of the compound entirely.

“We had to set up our plan to socially distance everyone,” Carter explains, “so we basically pulled up the CAD [computer-aided design] program and drew 6-ft. circles around every person in the truck. The additional gear, like the robotic camera, forced us to to put those in the stadium.”

As in the regular-season slate, the broadcaster has deployed various degrees of remote and GREMI workflows. For the clash in Nashville, some broadcast services will reside in offsite locations, including comments by officiating expert John Parry from his home in Ohio and four EVS replay operators and Viz Libero graphics in Bristol, CT. However, graphics for the line-to-gain camera will be onsite.

Over the past seven years, MegaCast has become a fixture on the college-football circuit. In an attempt to generate more buzz for this already enticing game, the overall production will span six channels within ESPN’s family of networks. 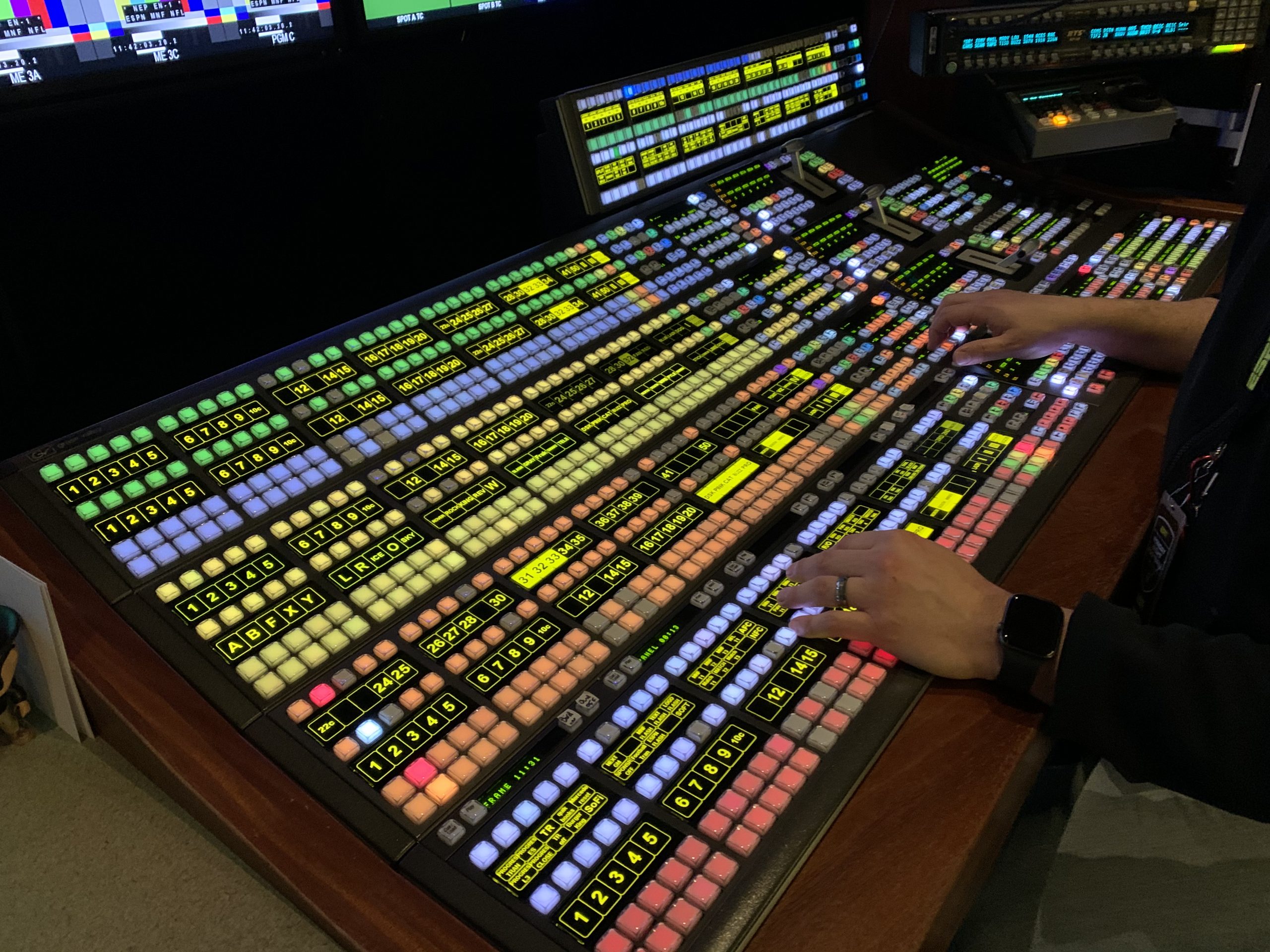 The ESPN team will deploy a Grass Valley production switcher in Nashville.

NFL fans of all ages and interests will be able to find something for them. Besides the traditional broadcast on ESPN, the game will be simulcast on ABC with full commentary by Steve Levy, Brian Griese, Louis Riddick, Lisa Salters, and Parry. ESPN2 will host the popular Film Room with insider perspectives and insightful breakdowns of plays from Sunday NFL Countdown’s Tedy Bruschi, Matt Hasselbeck, and Rex Ryan; Monday Night Countdown’s Booger McFarland; and NFL Live’s Keyshawn Johnson. On Freeform, Watch Party will be hosted by Maria Taylor and Jesse Palmer and fuse conversations about the on-field action and pop culture, interviews with special guests, and a halftime performance by DJ Khaled. Rounding out the linear offerings, ESPN Deportes will serve up the Spanish-language telecast with Pablo Viruega, Eduardo Varela, and John Sutcliffe.

ESPN+ will join the party with a crossover involving its NFL and college-football properties. On Between the Lines, the teams from NFL Live (Laura Rutledge, Mina Kimes, Dan Orlovsky, and Marcus Spears) and Daily Wager (Doug Kezirian, Joe Fortenbaugh, and Tyler Fulghum) will provide old-school analysis, new-age analytics, and sports-betting information.

To produce MegaCast, Carter and his crew will rely on 22 IP, satellite, and fiber transmission paths to send all camera feeds to Bristol. Bristol will be brimming with activity for this project on Sunday, and it will spill over into Monday for another MegaCast production for the 2020 College Football Playoff National Championship between Ohio State and Alabama.

“It’s a testament to our management who want to put our best foot forward,” says Carter. “Both of these events are very important, and we want to do everything we can to make them the best that we can.”

The Final Production: ESPN Pulls the Curtain on Another NFL Season

When the NFL decided to play outside of a bubble environment, there were many doubts that the season would ever be completed. After countless technological, logistical, and safety challenges, ESPN will defy the detractors who believed it couldn’t be done, wrapping its portion of the schedule and crossing the finish line with a few war stories to tell.

“Everybody has handled [the challenges of the season] really well, and I have to give a shoutout to the entire crew,” says Carter. “I also have to give a nod to my operations team, who have coordinated our testing facility. We’re doing everything we can to keep everyone safe, and everybody appreciates that.”