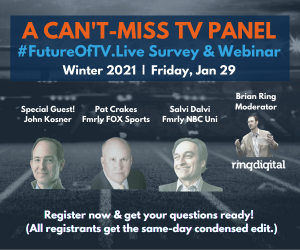 Kosner is an internet pioneer and four-decade veteran of sports media. He led digital media at ESPN from 2003-2017 after stints at Sports Illustrated, the NBA, where he was in charge of U.S. broadcasting during the Dream Team era, CBS Sports, and NBC Sports.

Upon leaving ESPN in June, 2017, Kosner reconnected with his former boss, NBA Commissioner Emeritus David Stern to create “Micromanagement Ventures,” a portfolio of 15 sports tech startups. After Stern’s death on January 1, 2020, Kosner continued to work with the MVP startups, added others and joined as an advisor to the now-public 890 Fifth Avenue Partners SPAC.

Other featured guests include Pat Crakes and Salil Dalvi.

Crakes is a former top brass at FOX Sports covering research, content strategy & programming. Today, he’s one of the most coveted media interviews in sports.

Salil is formerly the SVP from NBC Universal who has covered a range of strategic business, corporate development and new venture formation duties from digital distribution to mobile.