On the Hardwood: Charlotte Hornets Redesign Mobile App To Bring Spectrum Center Content to the Home

The Charlotte Hornets were unable to participate in the NBA bubble, but, with a head start in the offseason, the franchise’s digital team began developing a project that would maintain a buzz around the players. This season, its newly designed mobile app is allowing fans to digest pre/postgame interviews, cinematic videos, player features, and various in-venue fan activations and giveaways.

“We knew that we had to change the way we were doing things, and the digital experience that we’ve created on our app is one of the ways that we’re doing that,” says Matt Rochinski, senior director, digital media, Charlotte Hornets. “Right now, we don’t have the ability to produce a second screen, but we wanted to find a way to connect our fans to the game because we all know that they’re sitting at home and watching it on TV.”

Aside from the linear broadcast being shown on Fox Sports Southeast, the mobile app has become the other go-to destination for fans at home. Intended as a companion piece to the telecast, the app enables fan to interact with a wide array of multimedia before the game, during commercial breaks and halftime intermission, and after the game. For example, during any halftime, Rochinski and his staff work with Director, Game Presentation, Emily Ladd to bring the videoboard content, on-court entertainment, and other in-venue amenities to the digital platform. 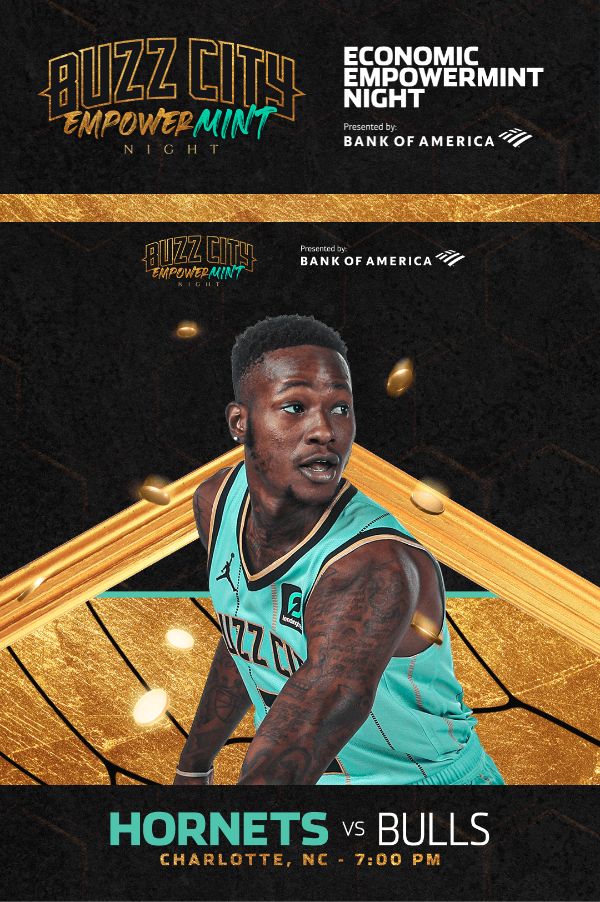 “We’ve worked with Emily and her crew on this [project], especially for our halftime performances,” he says. “Those are some of the things that fans are missing, so that goes live on our app during halftime. We’re trying to bring in more video pieces. More important, everybody loves giveaways. We’re trying to find new and creative ways to bring that to our fans as well.”

Unveiled before the contest against the Chicago Bulls on Friday, Jan. 22, the app’s newest feature, Gameday Hub, is the location for the most essential information, such as trivia questions and relevant articles on notable player performances. In addition to statistics and spotlights on some of the key incentives for heading to the arena, the app zeroes in on fan participation in a fanless Spectrum Center. When fans were allowed in the venue, cameras would capture their reactions and antics in real time. Now the organization is trying to reproduce that with virtual options that allow fans to leave their mark on the game, such as a virtual Dance Cam.

“We’ve looked at certain tentpoles that can keep bringing fans back [to the app],” adds Rochinski. “We’ve worked with a company called Rover to take those experiences on our app and push them out on social. It’s a lot of juggling, but, somehow, we’re finding a way to do it.”

Development of content for the app and the videoboard began during the preseason months. At the team’s annual Media Day, Rochinski and Ladd worked together to obtain all the player-centric material they needed prior to the beginning of the 2020-21 regular season. For example, the team needed to capture up to 80% of their content collection during the two-day shoot. For the remaining 20% and other areas where the team needs to produce more-timely pieces, the organization has been understanding and flexible with player time. 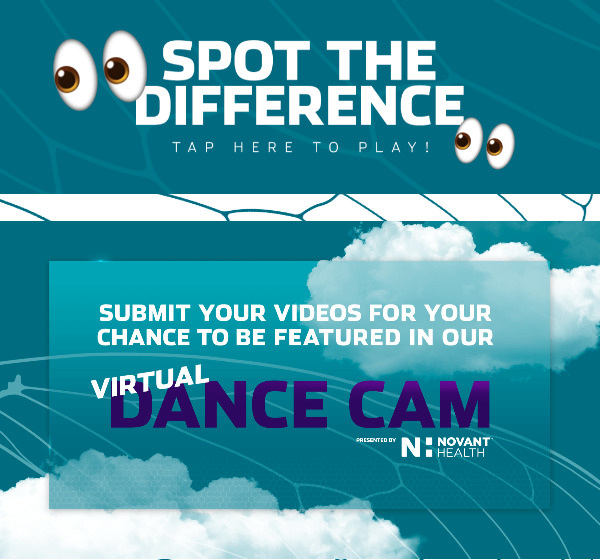 Fans can get involved in the game-day experience in a multitude of ways, including interactive games and a feature on the virtual Dance Cam at Spectrum Center.

“I thought we were really successful in our Media Day setup by getting everybody in and getting the content that we needed,” says Ladd, “but, if things pop up, we still have some access to the players. Everyone in the organization has been really great in managing expectations when someone asks for something last minute. Going through the proper channels and getting clearance are the extra steps that we need to take, but it’s working out well.”

When time-sensitive deadlines come into play, digital and game-day staff work together in a responsible way to get the content they need. It takes a lot of adapting since the workflows are still somewhat new. In the case of Media Day, each crew made the process more efficient by understanding organizational priorities.

“We really had to be strategic in what we were gathering,” Rochinski points out, “by saying, ‘Hey, what are the partnered elements that we need to absolutely take care of first?’ and then doing some of the other fun things that we might want to do separately. It was a collaboration between digital, game ops, marketing, and other groups.”

Hyping Up the Team: Spectrum Center Content Caters to the Players 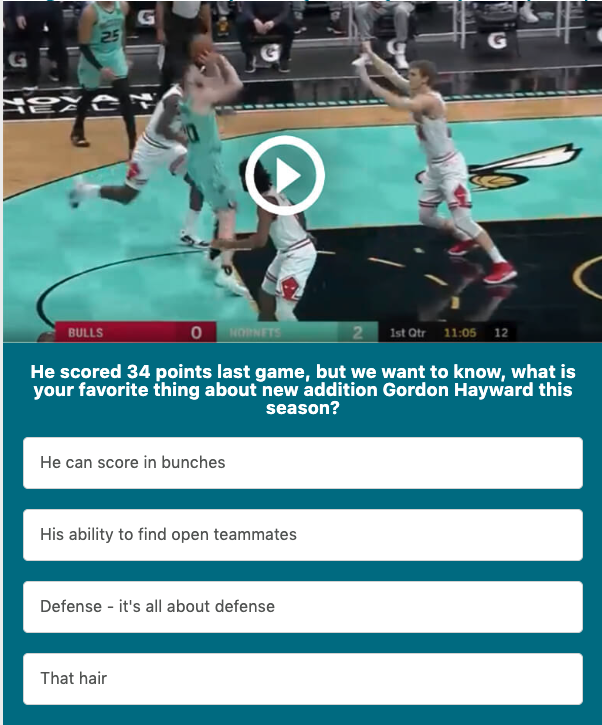 The Charlotte Hornets app presents a variety of poll questions after a player’s stellar performance, including fans’ favorite thing about Gordon Hayward.

Now in her 14th season with the Hornets, Ladd has never endured a season like this. An in-venue crew and fans have a symbiotic relationship: one entity feeds off the energy of the other. With empty seats and no crowd, the crew in the control room are painting on a blank canvas, with the goal of rolling with the punches and injecting more player-requested details into the run of show.

“We’re embracing the weird because [the empty arena] is awkward,” she says. “We don’t want to pull back anything. We’re focusing on things that cater to our players, like the music that they want to hear and playing as many stats as we can because everybody finds those helpful.”

The excitement and enthusiasm of a crowd is the figurative metronome of a game, and, without authentic crowd noise dictating the tempo and pace, playing in a silent Spectrum Center could be a bit jarring. With audio curated by Firehouse Productions, the Hornets are still fine-tuning fake crowd sound.

“It’s definitely a skill set that you need to learn,” says Ladd, “but I think we’ve been able to pick it up pretty well. You want to keep the guys thinking that they’re playing in front of a crowd, so my goal is to get them to hype up the crowd.”

The Ones Who Get It Done: Notable Names of Hornets’ Production Team

Ladd credits her colleagues and the entertainment crew who put in a hardworking shift during every home game, including team mascot Hugo, DJ A-Minor, and PA announcer Pat Doughty.

“Collaboration has exploded throughout our organization, and we’ve had a much better working relationship across departments,” says Rochinski. “We’re just going to keep building, improving, and offering our fans more and more things to come back to.”

Tonight, the Hornets will play the Indiana Pacers at 7 p.m. ET in the first of three straight home games at Spectrum Center.