On the Hardwood: Chicago Bulls Use Year-Old Videoboard, Mobile Predictive Gaming To Draw Up Production Plan

The United Center’s videoboard is the star of the show

Michael Jordan, Scottie Pippen, Dennis Rodman: a small group out of a large pool of Chicago Bulls players who have graced the court in the United Center. The venue technology has been massively upgraded since the dynasty years nearly three decades ago: a centerhung with six individual LED panels and a continuous-inner-ring display were installed in mid 2019. In addition, a new look to the Bulls’ mobile app allows fans to predict outcomes late in the game.

“[This season] has been a huge rollercoaster,” says Michelle McComas, senior director, entertainment and events, Chicago Bulls. “Our show isn’t as robust as it typically is, but we’re learning and implementing new processes.”

The in-venue experience inside the United Center has drastically changed March 10, 2020, when fans saw the Bulls defeat the Cleveland Cavaliers. With patrons at home, the one-year-old videoboard is at the center of game-day operations to get the players and coaching staff ready to go. Even in this peculiar season, the crew is still getting used to operating this new behemoth. 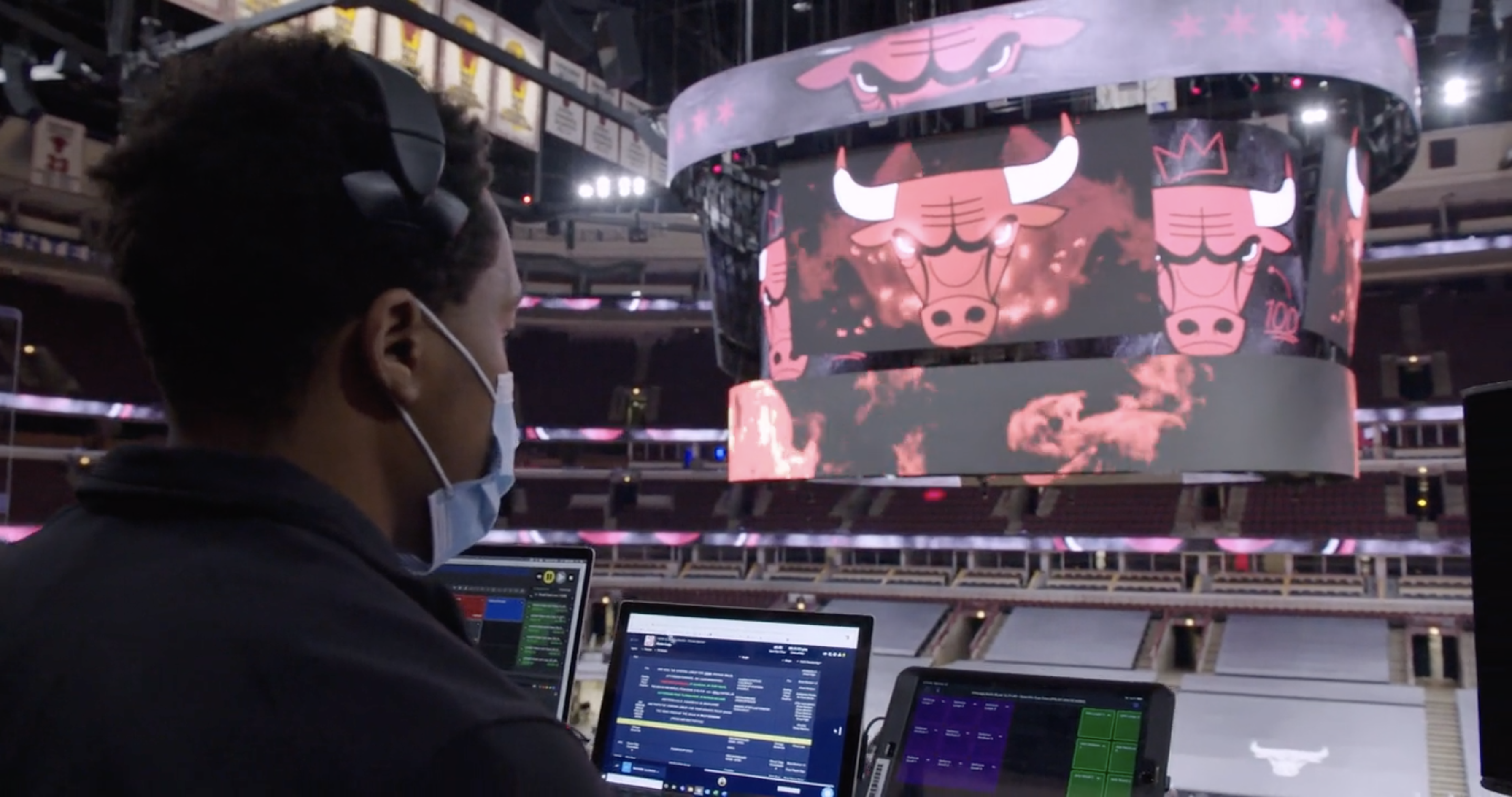 The new videoboard is the center of attention in an empty United Center.

“Beginning last year,” says McComas, “we began showing new stats, graphics, and video features to showcase our new toy. Even going into this season, we’re still fine-tuning how these elements are being displayed.”

These production elements target the individuals down below on the floor, including a constant flow of replays and highlight packages. Traditions that fans have become familiar with are another in-venue staple, including the running-of-the-bulls intro video and starting-lineup song (which is the same one used during Jordan’s playing career). Besides supplying an atmosphere for those inside the United Center, McComas and her team are a crucial part of the linear broadcast on NBC Sports Chicago.

“Our theme-night graphics, Benny’s Fan Cave, and other moments are shown during every single home game that is broadcast,” she says. “Audio is also very important, so we’re still making noise and showing our prompts as well.” 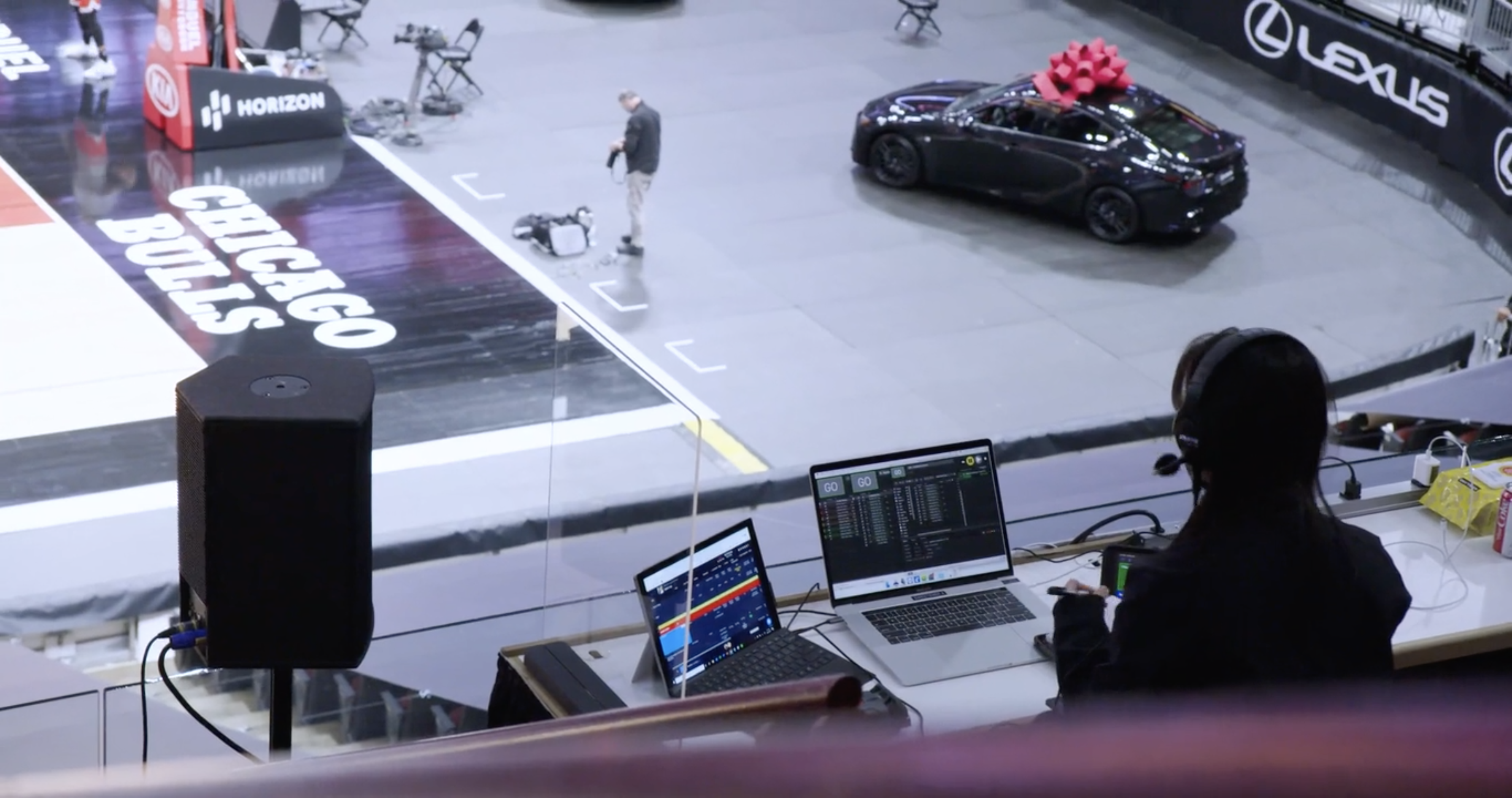 Chicago Bulls’ Michelle McComas at her post during a home game

This season, it’s all about finding a balance that honors the team’s history while also paving a new path for the current team. This blend is something that the production team is still figuring out, but the players have enjoyed the influx of new content that they might have been possible when fans were in the seats.

“We still have our sequence to celebrate our history and our beautiful city,” McComas adds. “Now that we’re in a groove, we’re starting to slowly integrate entertainment staples into the mix with music. [For example], if there’s an exciting moment after a big play, we’ll start showing sizzle reels of Benny the Bull shooting T-shirts from the court.” 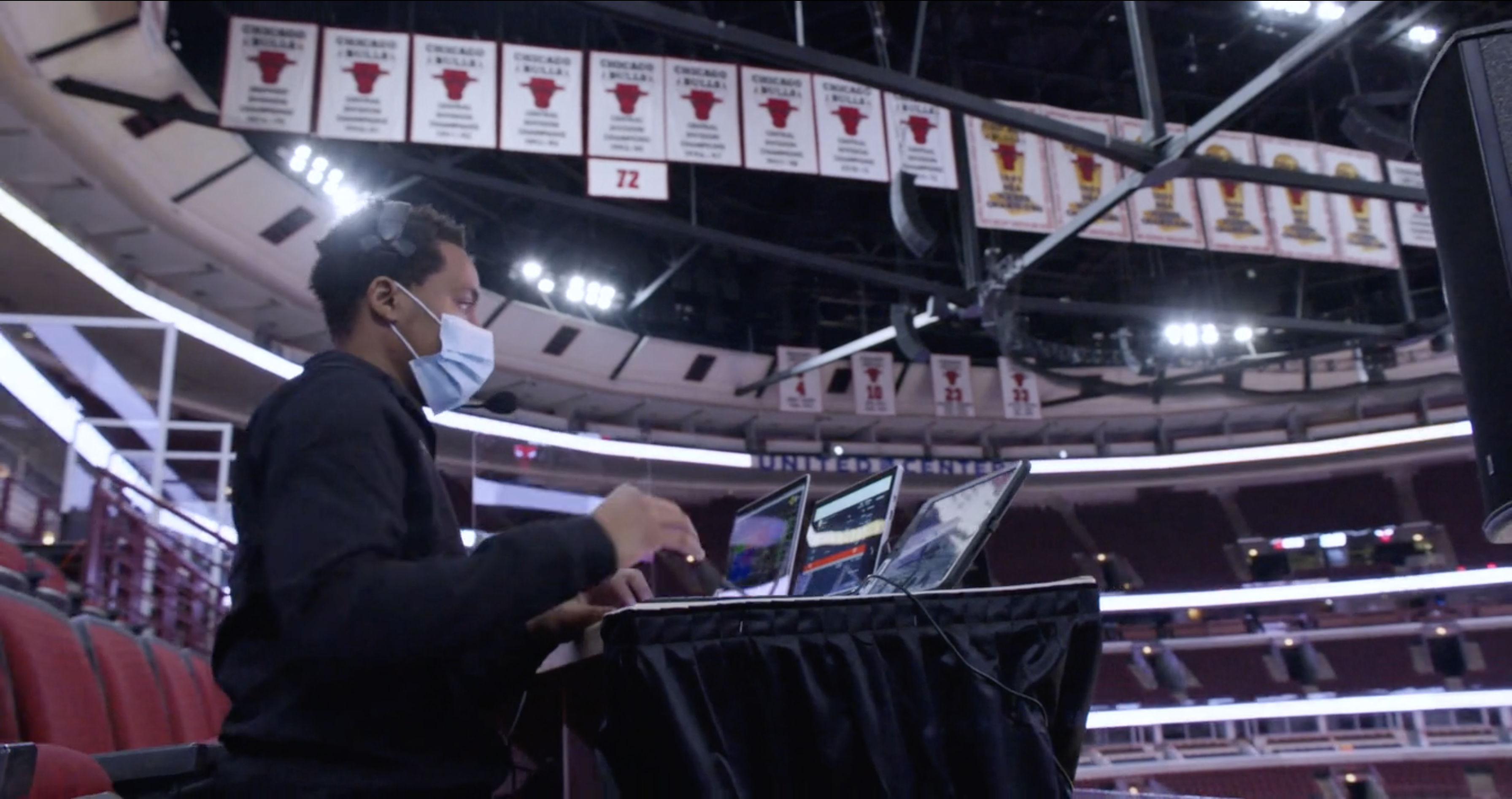 Outside the United Center, digital-savvy Bulls fans can enjoy a new second-screen experience on game day. The digital team has added a section dubbed Home Court to the Bulls mobile app, allowing fans to simultaneously interact with action occurring on linear television.

“It’s our new game-day feature in the Bulls app that’s available only during home and away games,” says McComas. “There’s a live component called Bull’s IQ with predictive gaming questions and a live chat.”

In addition to the predictive-gaming element, other game-day visuals can be exclusively viewed on the digital platform.

“Overall, our digital team’s goal is to try to replicate the experience of coming to a game at the United Center as much as possible,” she explains. “They’re featuring behind-the-scenes content like player arrivals, shoot-around, and Benny the Bull’s game-day story. In addition, we’re still doing all the great giveaways that fans know, love, and expect to see at a game, including free flights on United and a free car at the end of this season.”

The Ones Who Get It Done: Notable Names on Bulls’ Production Team 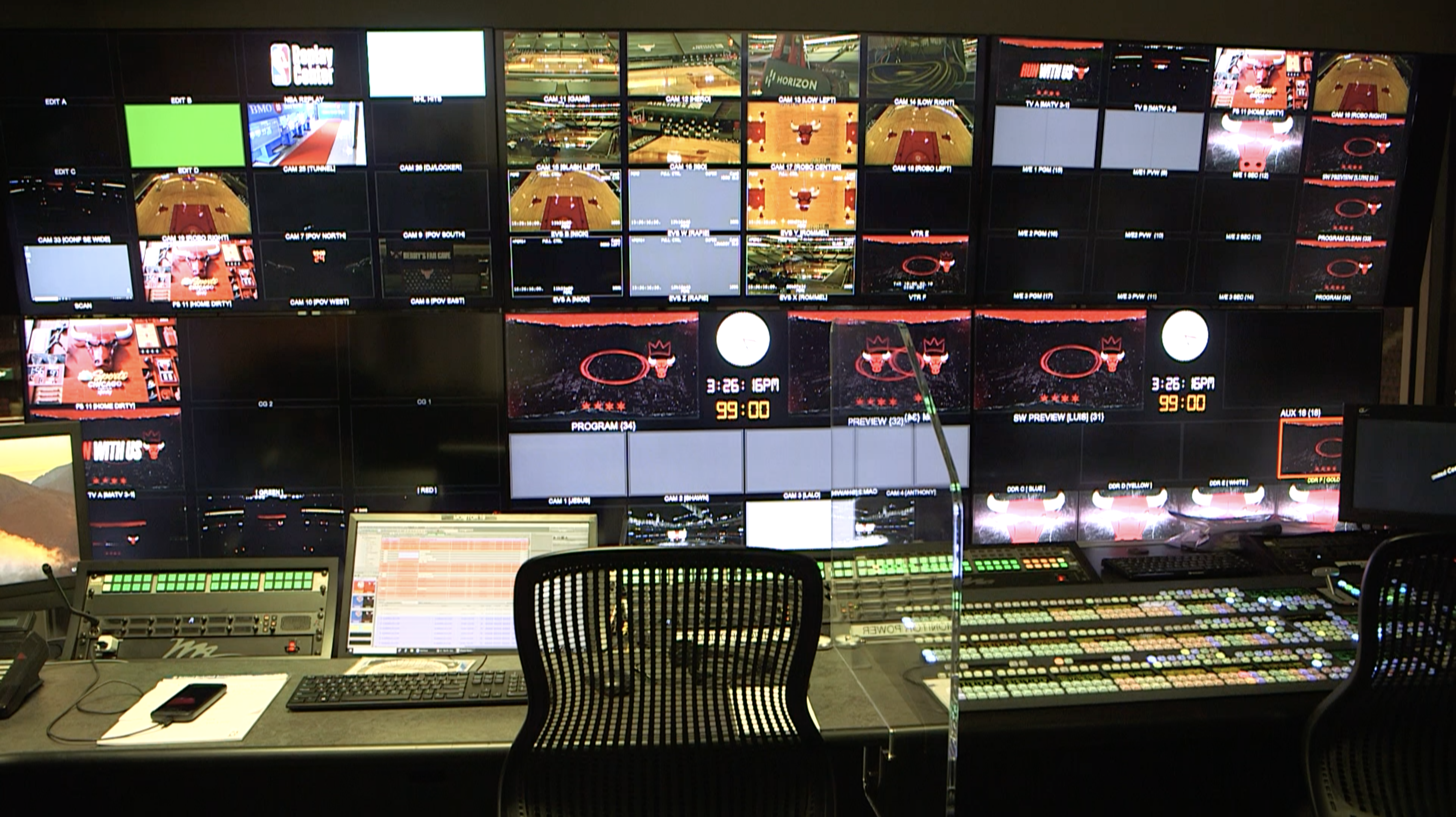 The control room is filled with plexiglass dividers and individual workstations.

Chicago’s passion for its sports teams runs as deep as its pizza. And, while fans are hunkering down at home, the Bulls are doing everything they can to make every game day a fun one. For Senior Director, Scoreboard Operations, Sergio Lozano; Manager, Entertainment and Events, Todd Abbott; Coordinator, Game Presentation, Michael Vigan; and Senior Event Manager Rachel Baudhuin, the past year has gone from hosting the NBA’s midseason festivities in 2020 to the current extraordinary circumstances.

“We went from a huge milestone in our careers with NBA All-Star weekend a year ago to not having any fans at all in the building,” says McComas. “ We had to relearn how we did things, but I’m proud of everybody and thank them for all that they do.”

The Bulls will host the New York Knicks at the United Center on Wednesday, Feb. 3 at 8 p.m. ET.