In a dramatic move this past NFL offseason, future Hall of Famer Tom Brady took a chance on himself and joined the Tampa Bay Buccaneers. Eleven months later, the new skipper led the franchise to its first playoff berth in 13 years and, subsequently, to Super Bowl LV vs. the Kansas City Chiefs in Raymond James Stadium, creating the NFL’s first-ever home-field advantage in a title game. Along the team’s voyage to the Big Game, its digital team and loyal fans have shown support for Bucs through the “Raise the Flags” trend taking over social media. 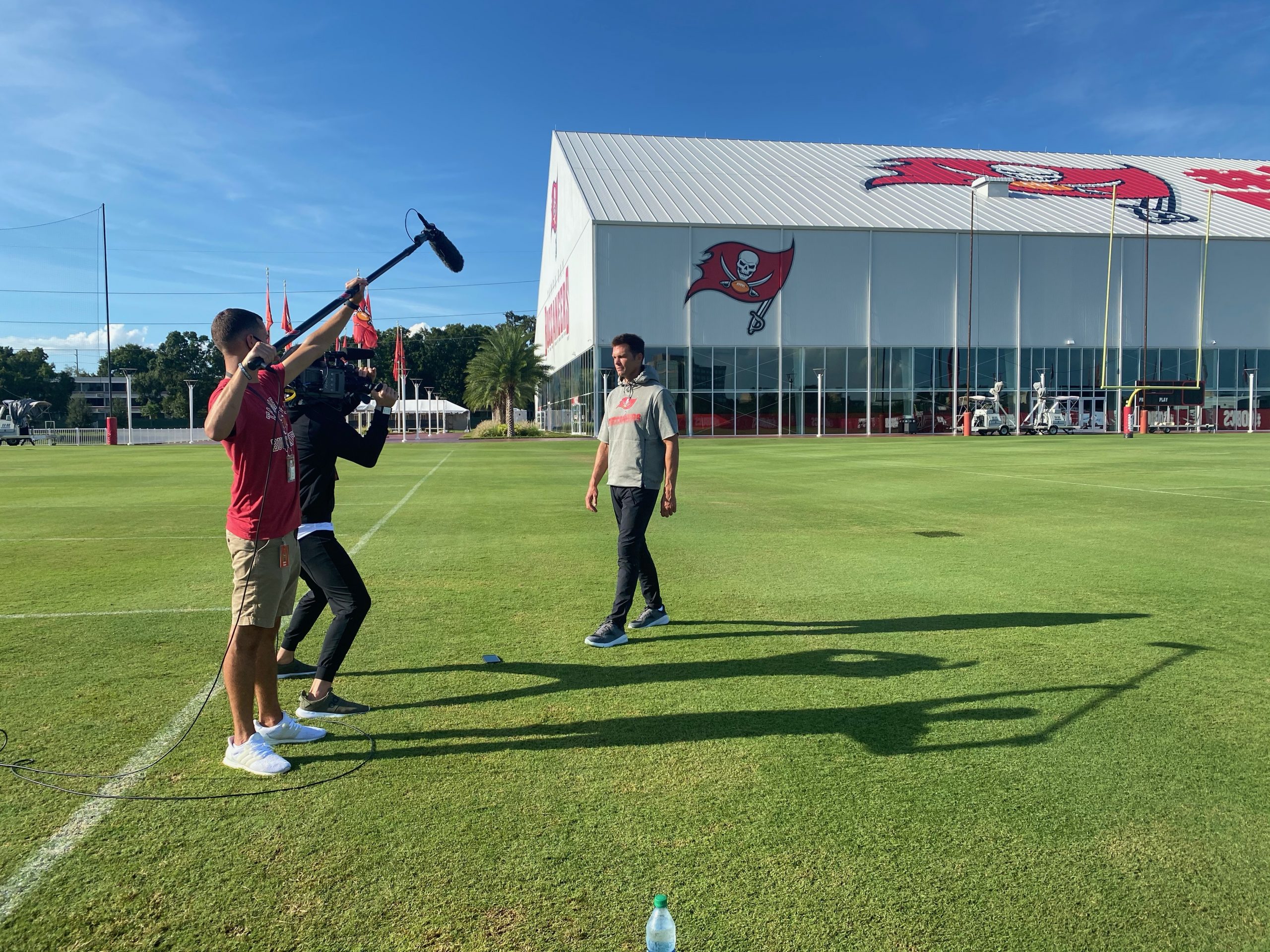 Near and far, Buccaneers fans are excited to be back in the NFL limelight. Through the power of social media, the digital team wanted to issue a challenge to fans in a way that was socially distant and to galvanize the fanbase in a visual way. The movement became known as “Raise The Flags,” via the corresponding #RaiseTheFlags hashtag, began on Twitter before the Wild Card Round on Jan. 4.

Other notable alumni also answered the call to action, including Hall of Famer Warren Sapp, bruising former fullback Mike Alstott, and Super Bowl XXXVII champion Joe Jurevicius. Natural wonders are included as well: for example, one fan took a picture with his Bucs flag from atop Uhuru Peak on Mount Kilimanjaro. 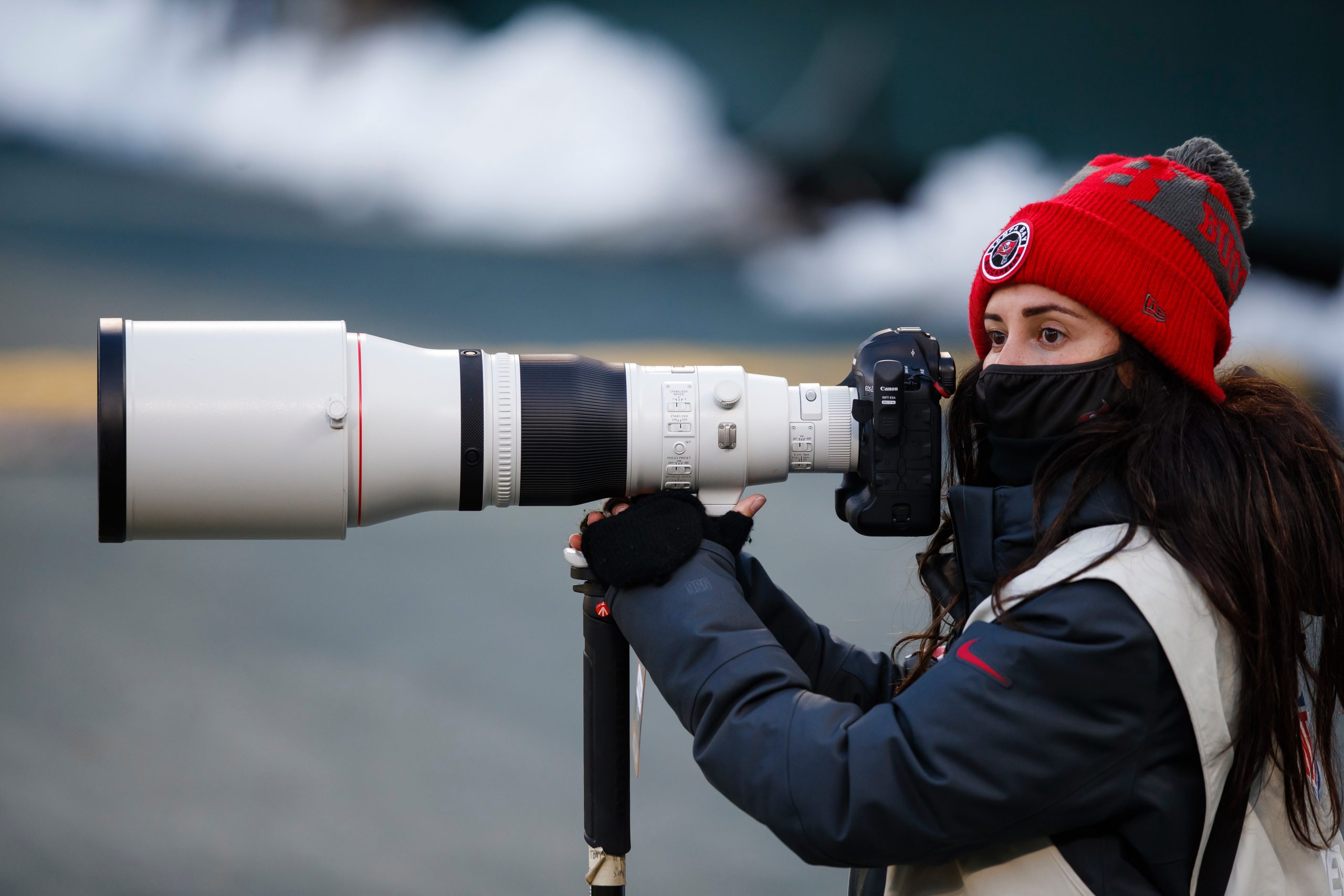 One of the major storylines is the Super Bowl’s venue. Not only is it the home of the Buccaneers, but it has hosted two other Super Bowls — XXXV in 2001 and XLIII in 2009 — and the 2017 College Football Playoff National Championship. In addition to being the future home of WrestleMania 37 in two months, this venue has seen its fair share of memorable moments. Sunday’s upcoming matchup will be another notch in the stadium’s belt, but this one will have more significance in NFL lore.

“We’re ecstatic to be here, so we’re fully embracing it,” says Bedan. “Due to the historic aspect of the game, we’ll have a few pieces that give a nod to that.”

During the COVID-19 pandemic, it has been hard for fans to attend in person. Since the biggest day in the NFL schedule is happening in their backyard, the Buccaneers have developed a video that leverages visuals and other sites familiar to fans and incorporates player voiceovers:

From a logistical and productive perspective, workflows and protocols will be different from those of regular-season games. Since the Super Bowl is branded as an NFL event, Bedan and the digital team will have to adhere to league guidelines.

“While we’re familiar with the stadium,” she notes, “this will still be an NFL event vs. a Buccaneers event. As a result, it is a new event for us operationally.”

To connect the local community, the organization is honoring a handful of frontline workers with free tickets to the game. To accomplish this, the team recruited tight end Rob Gronkowski to record personalized messages to these professionals:

Lastly, prior to the start of Super Bowl weekend, the production staff will facilitate a kickoff show on Thursday evening to bring the fanbase together. 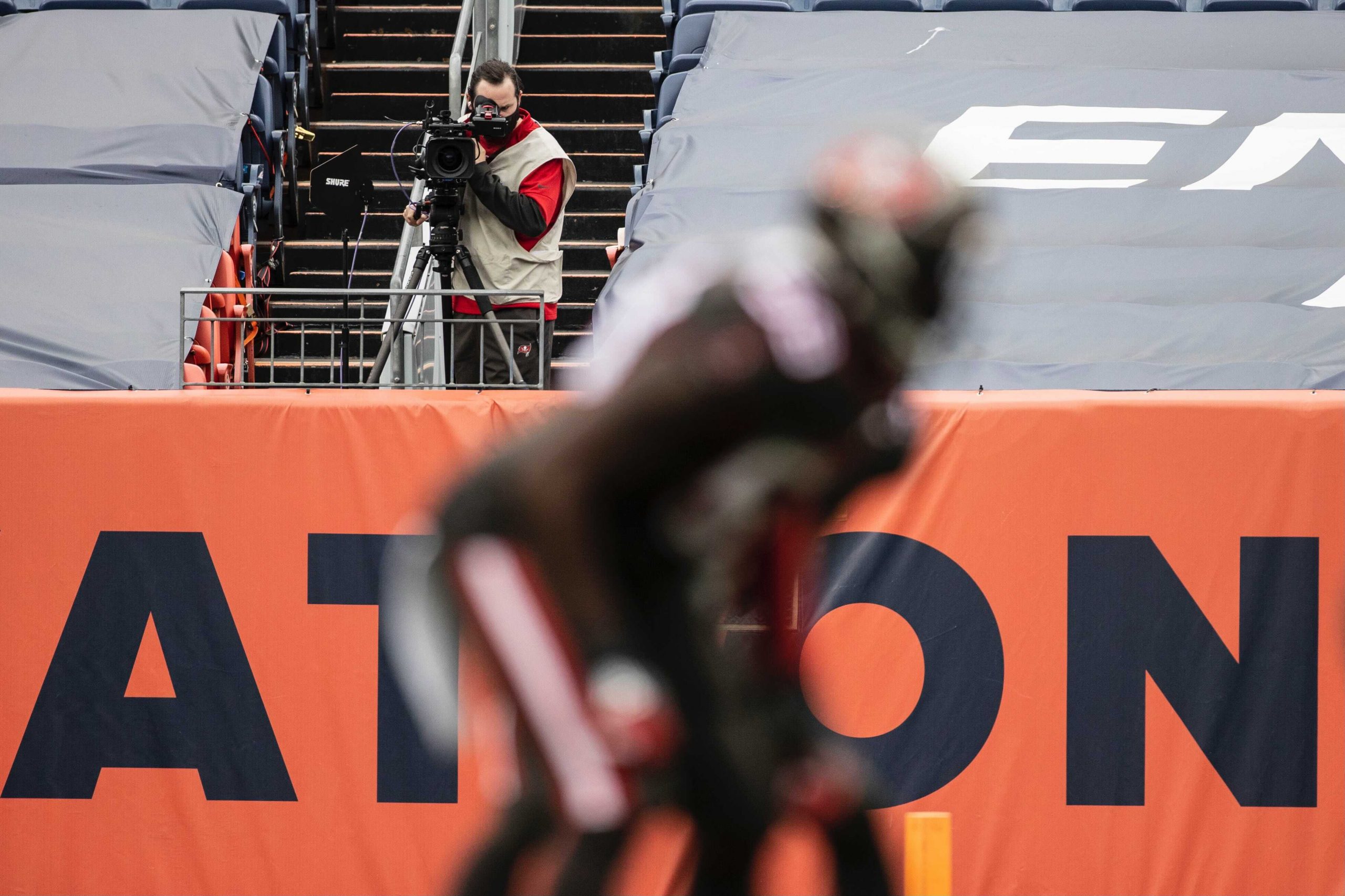 Producer Jake Horan in the stands at Empower Field at Mile High during the Buccaneers’ Week 3 game vs. the Denver Broncos.

Around the league, production crews had to abide by health and safety restrictions throughout the schedule. Despite having a lack of access to the players and other personnel, Bedan and her colleagues came up with a mantra for weathering the storm and overcoming the challenges that the pandemic presented.

“The key phrase this year was ‘Be flexible,’” she says. “Access and restrictions all changed multiple times throughout the season, and we adapted accordingly. We’ve done a lot with a little and made the most of it. [Ultimately], we try not to think about the ‘what-ifs’ and focus our energy on what we can control to give our fans the best possible access to the team.”

One adjustment was necessary during the team’s training camp. While other teams, such as the Denver Broncos, built a set outside the training facility, most teams needed to rely on robotic cameras or rely on staffers working under zoned clearance. The Bucs, however, found a content gold mine in footage caught via a POV camera.

“One of my favorite activations was a GoPro that we set up during training camp,” notes Bedan. “We saw the personality of our players come to life while maintaining our distance. It’ll probably be one of the things that we’ll continue to do in a post-COVID world.”

During Super Bowl LV, all members of the digital team will be onsite within the venue. It’s another perk of playing the Big Game at home. 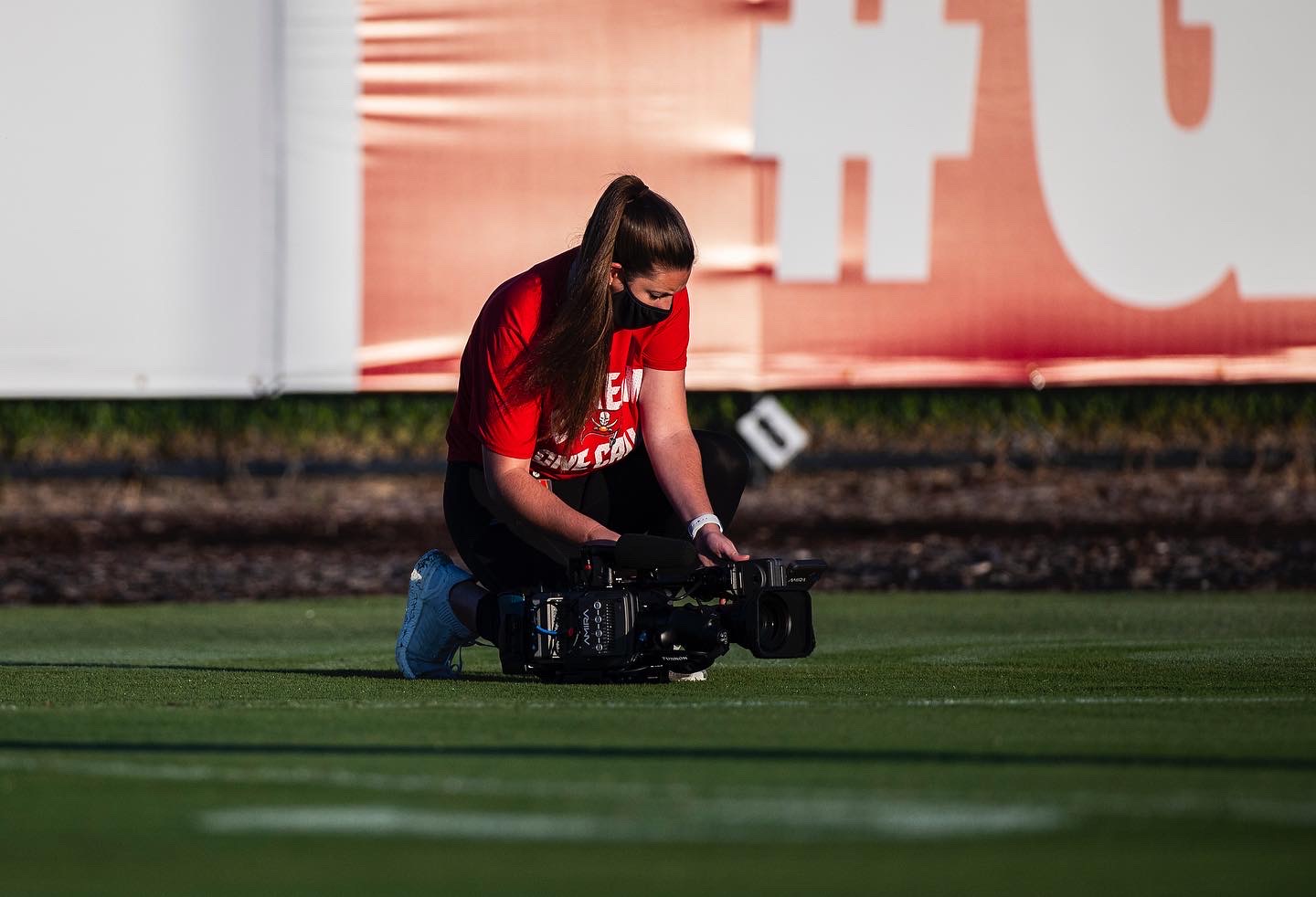 Nowadays, a team’s journey is documented through activity on social media and other digital channels. In the case of Tampa Bay, the franchise pushed toward creation of long-form content to weave a cohesive narrative throughout the season. Season 3 of In the Current, a four-episode miniseries edited during the year’s early months, chronicled the team’s preparation for the season and how it navigated the obstacles of the pandemic. Bucs Rewind, shot by camera operators following the players on game day, has become a weekly cinematic recap of the previous game. In a more short-form style, TD Tuesday has become a weekly occurrence on Twitter, replaying an amazing play resulting in a touchdown.

More recently, the crew was present to capture intimate moments off the field, including Brady and his son after the team’s victory over the Green Bay Packers in the NFC Championship game. The video on Instagram was one of their more highly-engaged of the season.

“Our most popular post was two weekends ago when Tom Brady hugged his son following the game against the Packers,” says Bedan. “I’m very proud of how the team has capitalized on the year [by developing] high-quality content and social-media–driven moments.”

Ending It at Home: Buccaneers Reflect on Wild Road to Super Bowl LV 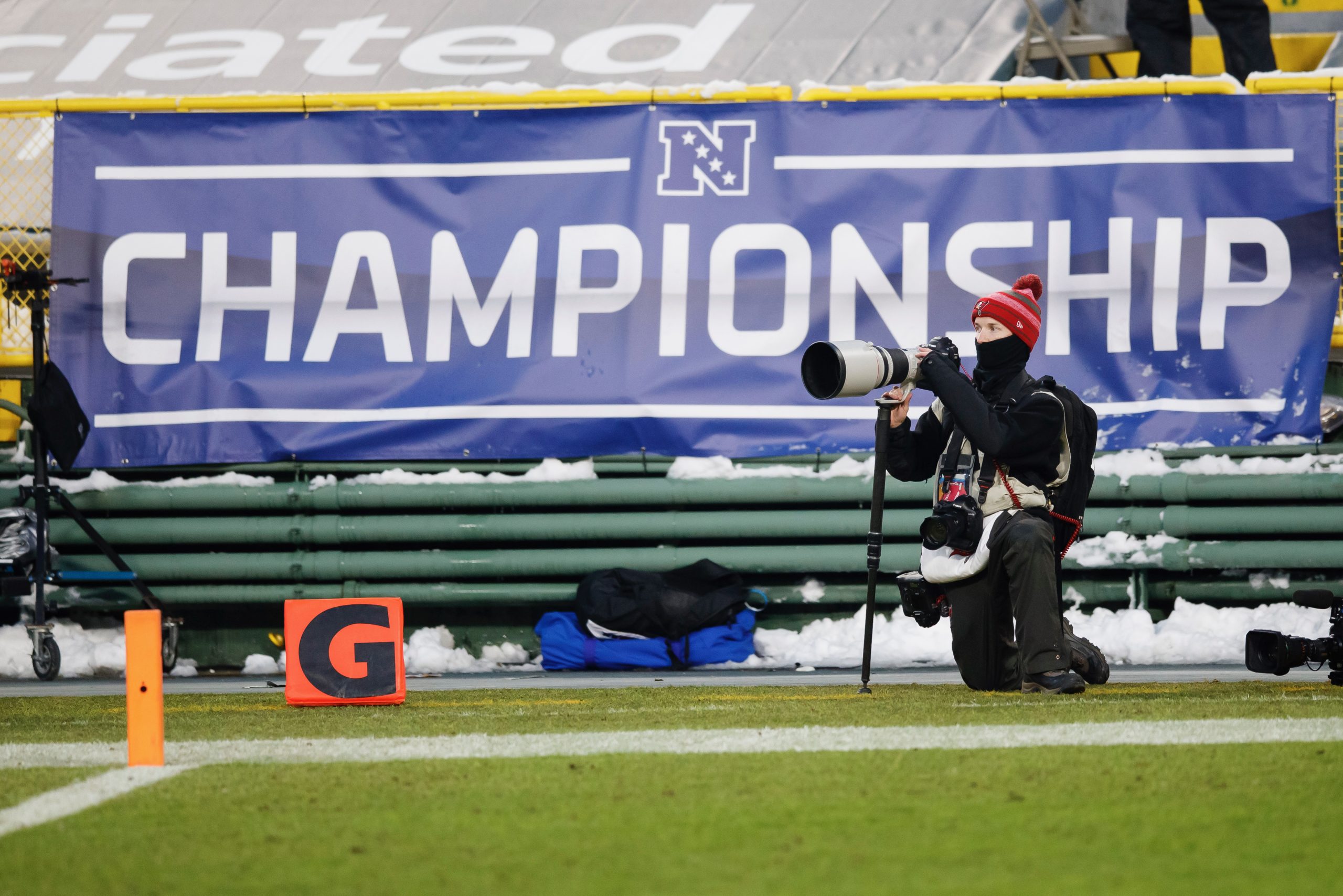 Team Photographer Kyle Zedaker sets up near the end zone of Lambeau Field during the NFC Championship game.

For Bedan and her staff, it has been a season unlike any other. In a year marked by the struggles that come with COVID-19 and the highs that come with being one of two teams left standing, it was a banner campaign for the league’s Super Bowl host.

“It has been an unbelievably special season,” Bedan says. “From our uniform reveal and free-agent signings in March to heading into our first Super Bowl in 18 years, I cannot tell you the amount of dedication, passion, and teamwork this team has shown in an unprecedented year.”