As the home of pro football, NFL Network always goes all out for Super Bowl Week. And, while its onsite presence has been significantly slimmed down due to the pandemic, NFL Media is still delivering more than 70 Hours of live Super Bowl coverage this week from Tampa; its broadcast center in Culver City, CA; and its Good Morning Football studio in Manhattan. 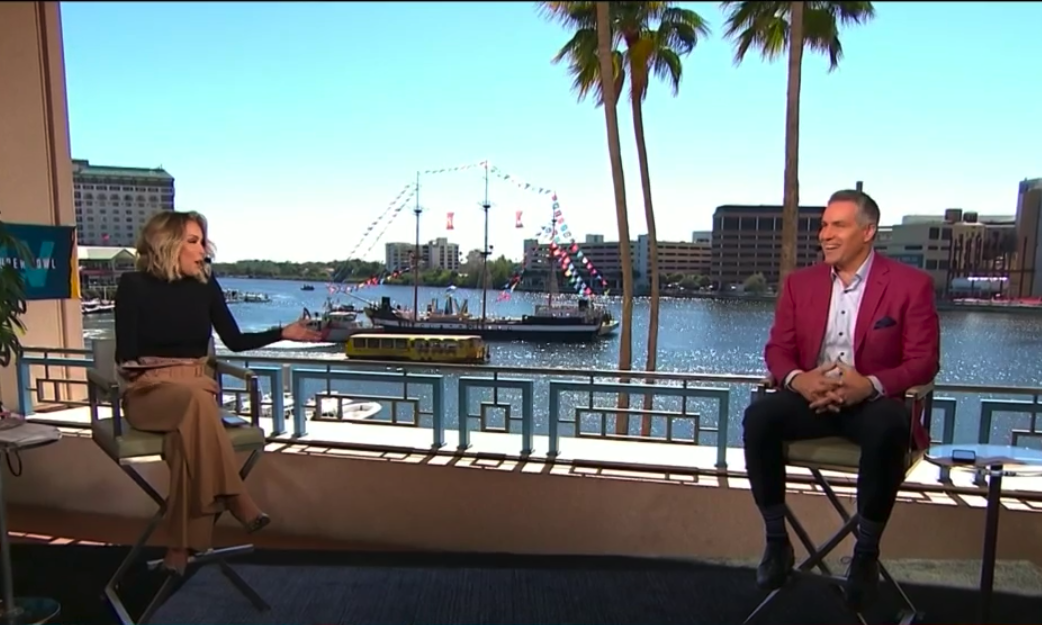 NFL Media is using five control rooms in Culver City and one at NFL Films HQ in Mt. Laurel, NJ, as part of its largely at-home productions. These facilities are working in conjunction with Game Creek Video Glory A and B units, located at Raymond James Stadium in Tampa, to produce a cavalcade of preview programming throughout the week, along with pre/postgame shows from the stadium on Sunday.

“Despite the challenges due to COVID, our team has executed a great plan so our productions for NFL Network,” says Dave Shaw, VP, production, NFL Media. “And our various digital programming remains second to none for superior coverage in our week-long pregame coverage heading into Super Bowl.”

Onsite in Tampa: A Smaller Crew Across Three Main Locations 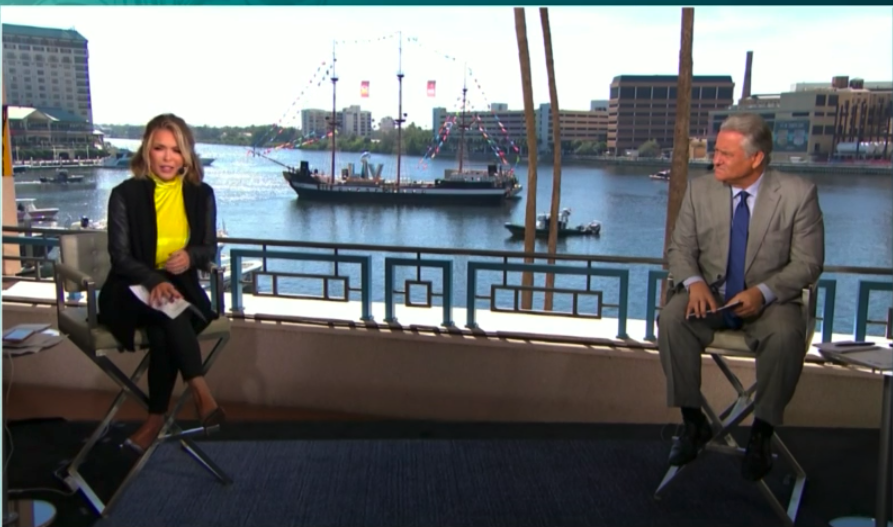 NFL Network’s Super Bowl Live set serves as the hub for its coverage leading up to the big game.

Remote production at the Super Bowl is nothing new to NFL Media, which produced much of its Super Bowl LIV coverage from Culver City and Mt. Laurel last year as well as that of Super Bowl LIII in 2019. However, in an effort to travel fewer personnel because of the pandemic, NFL Media has leaned into remote production even further and reduced its onsite crew from 583 in Miami last year to 217 in Tampa this week.

“This year, in reacting to COVID, we’ve gone even more [remote] than in years past,” says Shaw. “Essentially all productions this week are based in Culver — unlike in previous years when it was more of a mix. On game day itself, we would normally just throw to the host city, and then Culver would be used for backup and relief. Not this year, though Sunday’s programming will still be very exciting because we have people in Tampa at multiple locations. The programming will be great, but we also get to have added disaster recovery and can keep everyone safe.”

To enhance safety, the network has reduced the number of locations for originating content, deploying sets in three places in Tampa. The primary set on the concourse of Raymond James Stadium will be the home base for its NFL Game Day Morning pregame and NFL Game Day Final postgame coverage on Sunday.

Leading up to the Big Game, NFL Media programming will be located at the Tampa Convention Center (where Radio Row, the media center, and Thursday’s Half Time Show press conference are held) and at nearby Tampa General Hospital, which is serving as the main location for Super Bowl Live throughout this week.

“Tampa General Hospital is a great location for us,” says Shaw. “It’s got a beautiful view of Tampa. Plus, it has an overhang for any [inclement] weather. We really feel like we carved out a nice spot for Super Bowl Live there.”

In addition, NFL Media has a small setup at Amalie Arena for the commissioner’s press conference on Thursday and has reporters at the Buccaneers’ and Chiefs’ hotels.

Dedicated crews are assigned to each location, and strict limitations restrict people from moving from set to set. In addition, many meetings that would normally be in-person are being held virtually or have been eliminated. And, of course, consistent testing, mask-wearing, and social distancing have all become the way of life for the NFL Media team.

“We have COVID managers onsite everywhere,” says Shaw, “and we’ve spread out people so that you don’t have too many people in any one room. In case we have a positive case, it doesn’t take out a whole crew. Typically, our crew members are jumping from one place to another, but, this year, we dedicated crews to each location, and they stay put. Everybody has adjusted really well, though, and is doing a phenomenal job to keep each other safe.”

In the Compound: Game Creek Glory Serves as Home Base 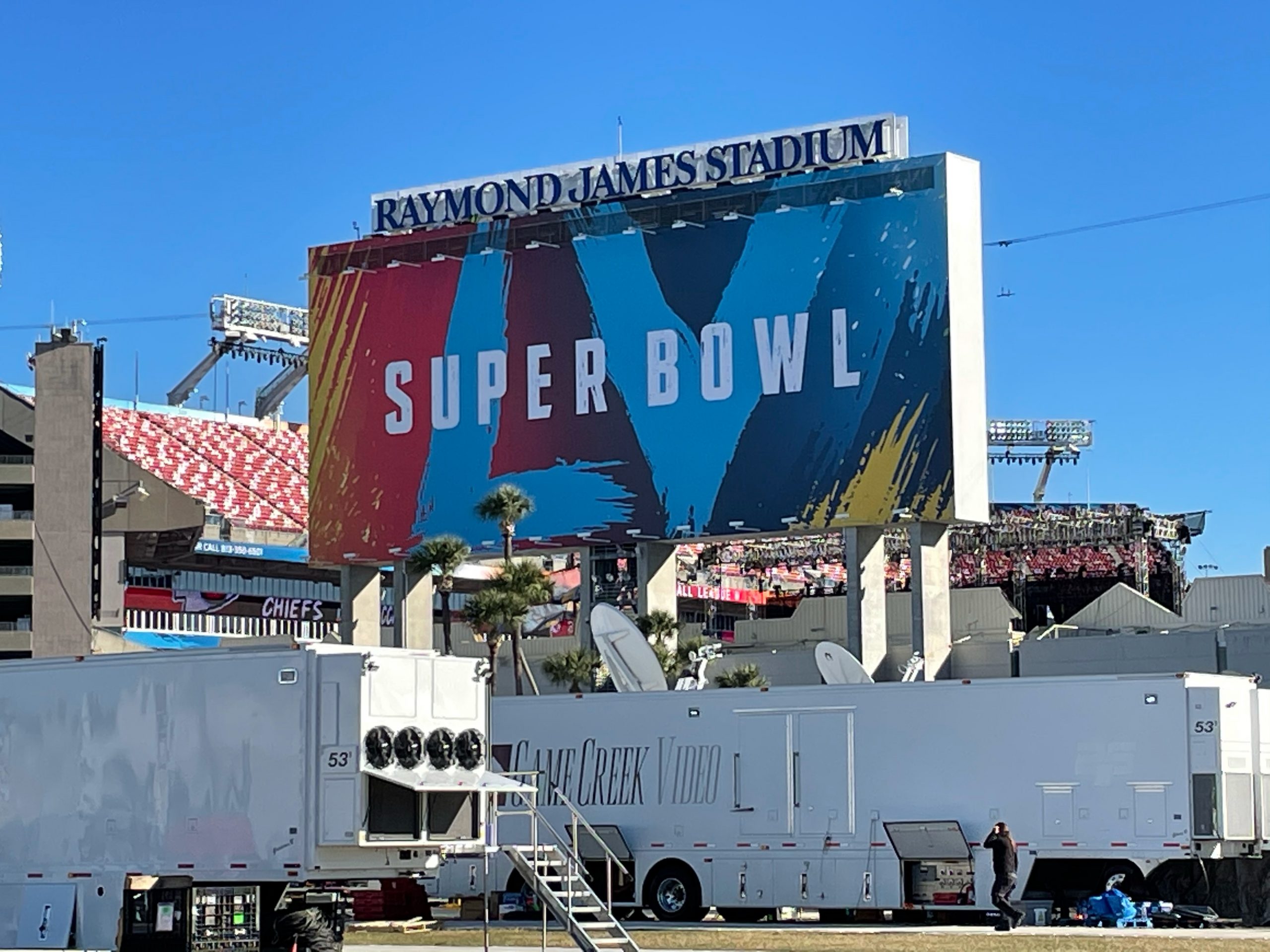 Game Creek Glory is onsite this week for NFL Media

Game Creek Glory is onsite this week to capture camera/audio paths and pass them through to Culver. On game day, NFL Media will implement a precut workflow, with director Steve Beim located in the truck for Game Day Morning and Game Day Final to precut cameras. All camera sources from postgame press conferences and various events will still be delivered discretely to Culver along with this precut feed for the primary studio show.

In addition to Game Creek Glory, NFL Media has rolled out HFI Flex 11 support unit at the stadium, a pair of American Satellite Uplink production/uplink trucks at the convention center and Tampa General, respectively, and Digital Comm Link’s K2 Ku-band uplink truck. LTN is on hand with its facilities to handle encoding and muxing.

NFL Media has established direct fiber circuits between the locations and Culver, using Lumen Technologies and The Switch for redundancy, including six fibers (each with 10 muxes) handling 60 signals plus 100-MB data lines between the stadium and Culver. The convention center, Tampa General, and Amalie Arena also have multi-fiber paths running to Culver. NFL Media’s stadium presence is connected to Mt. Laurel via four fibers. The team has further redundancy via Encompass Digital Media’s Atlanta facility, which is set up as a DR facility for Tampa, Culver, and Mt. Laurel.

“We always have disaster recovery in mind,” Shaw explains, “but that’s even more the case with COVID. We have virtually every possible situation — we hope — covered in one way or another with a backup. We have circuits running everywhere across the country, from Tampa to Culver and everywhere in between.”

Besides Tampa, NFL Network operations spread across the country this week, with Good Morning Football at its studio in New York and NFL Total Access and other studio programming produced in the Culver City Studios. In addition to NFL Network, NFL Digital Media is churning out live shows Super Bowl Today, Around the NFL, NFL GameDay View, and more on NFL.com and the NFL app.

Over the season, Shaw’s team worked to bolster Culver’s decoding capabilities to handle the deluge of video feeds that come in on a daily basis — with even more coming in during Super Bowl week. Many of the 45 NFL Media on-air personalities featured this week will contribute from home, dozens of guests will join remotely via Zoom, and Azzurro TeamCam system will be as integral as ever with players and coaches checking in from NFL facilities. 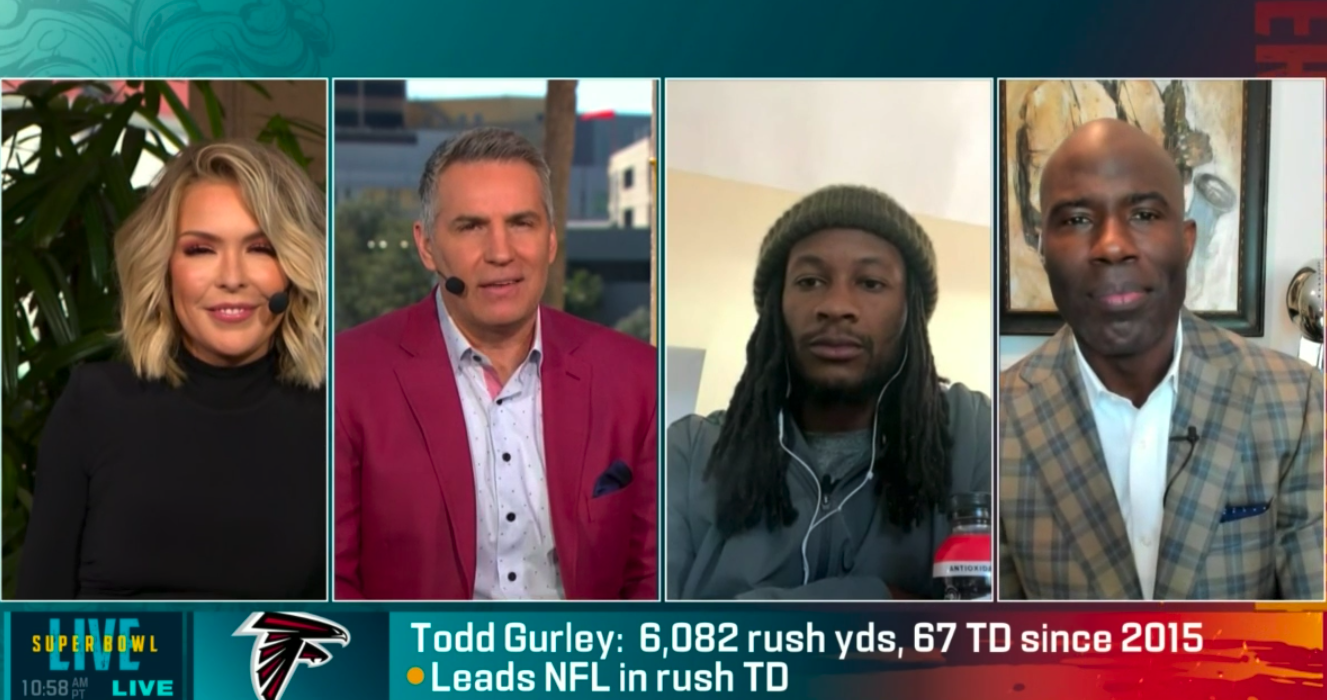 NFL Media’s coverage is split between Tampa and Culver City for Super Bowl week, while dozens of guests are being brought in virtually via zoom.

For Shaw, this week marks the culmination of a season-long effort to overcome tremendous challenges. Beginning with the first-of-its kind virtual NFL Draft and continuing throughout the regular season and playoffs, the NFL Media operations, engineering, and production teams have consistently devised new solutions and innovations to stay on-air and keep content flowing to NFL fans.

“I’m always in awe of the team that we have, but even more so this year: they adapt, they’re resilient, and they always manage to figure it out,” he says. “Everyone has really stepped up all season long. At this point, it has become muscle memory on how to deal with all of this. Everybody keeps coming up with different ideas on how to do it a little bit better, and I know that will continue this week.”