ESPN’s onsite presence at a Super Bowl has always been a lively one, especially last year, when its efforts involved the Clevelander Hotel on Ocean Drive in Miami Beach. Although the pandemic has definitely resulted in a dialed-back Super Bowl LV effort without the throngs of fans, the production team is getting things done at St. Petersburg Beach and at Tampa’s Raymond James Stadium. 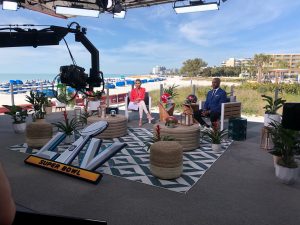 In the past, notes Carlton Young, associate director, remote production operations, ESPN, the broadcaster would have as many as six locations in a Super Bowl city. “This year, we are down to two, but we’re still able to provide tremendous coverage from the beach, and it looks beautiful.”

Dustin Epstein, senior remote operations producer, ESPN, is onsite at the beach, where a 30- x 40-ft. stage, provided by MB Pro Sound, is covered by four cameras and a jib. LMG Gracie mobile unit is onsite with a limited crew of about eight working in it at any one time.

“One of the major changes this year is, we’re not using a desk,” he says. “So it’s a lot more independent, individual seating. That helps out with space, as there are a lot more restrictions on how many people can be on the stage. And it is similar to the size of stage we’ve used in the past.”

Also missing is the demo field, as well as the need for audience monitors and a PA system because of another missing element: fans. 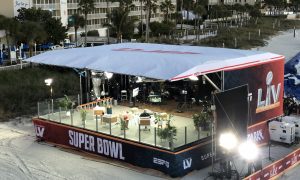 “We’re discouraging crowds as opposed to normally when we are encouraging people to come,” says Jahala Chrzan, remote operations producer, ESPN. “We set up the stage so it’s difficult to get to, and we aren’t doing any advertising or asking people to come.”

She adds that lack of a crowd feels a little odd but the crew’s energy has been incredible. “Everybody has been very excited about working and being back to work. We’ve had cold and high winds, and no one is complaining. Everybody’s just very excited to put this show on.”

Talent is responsible for their own makeup, all headsets get sanitized, and talent keeps and uses their own in-ear pieces.

“We also have a UV box on the stage,” says Epstein. “We have an air scrubber that has helped on the set that can give us different-temperature air so we can get heat and air-conditioning from it. But the main thing is, it’s giving us filtered air.”

On Super Bowl Sunday, the action will transition to Raymond James Stadium and the set located on the south concourse between CBS Sports and NFL Network.

“The whole show is there,” says Mark Mignini, operations manager, ESPN. “We’re not moving around. There’s no field access, and there’s no side set or even an embedded reporter. And Chris Berman, who normally interviews the MVP, will do that via Zoom.”

The result is an onsite team that is about half the size of the normal crew because the stadium-production side of ESPN’s coverage embraces the REMI and GREMI philosophy. Also, the desk, which usually can fit five or six people, has only three to ensure proper social distancing.

“We have two EVS operators in Bristol,” says Mignini. “CMSI is doing file transfers for us from their L.A. offices and sending everything back and forth via a switched line.”

Game Creek Video Gridiron is back (it made its debut at last year’s game) with the same personnel.

“We have the same engineers, which is great because we have consistency and everyone knows the workflow,” adds Mignini. “MB Pro Sound is providing our stage there as well, and it’s actually the same mobile stage we use on the sidelines for Monday Night Countdown. We literally rolled it onto the concourse and put it in our spot. We’re sharing the space with CBS and NFL Network and just being cognizant of one another and respectful. And, in a couple of days, we’ll be making TV.”

Young considers ESPN lucky with MB Pro Sound located in Tampa: “It made things very convenient because we were able to connect them with the NFL and their contractors. They went over dimensions, travel routes from the parking lot through the stadium, and other specifications. When our guys arrived onsite to put the stage in place, we knew quite early that it would be a perfect fit. It was a tremendous synergy.”

ESPN’s efforts extend to the international. A team is at the stadium to ensure that the game is delivered to more than 71 million households in 134 countries and territories throughout Spanish-speaking Latin America, Brazil, the Caribbean, Australia, New Zealand, the Pacific Islands, Canada, the Philippines, Netherlands, and Sub-Saharan Africa.

“Our department has a team onsite that is also responsible for that operation,” says Young. “While most of our activities are around the peripheral coverage, there is an Operations team onsite in support of our international side that is putting the game on-air.”