Asharq News, the new multiplatform economic and political news service launched in November last year, is the first project in the MENA region in which the media infrastructure is based entirely on IP technology. A central role is also played by the use of virtualized on-premises systems and cloud applications as a hybrid architecture for content aggregation, production and distribution. The overall control of the infrastructure is carried out by the use of Lawo’s VSM Virtual Studio Manager Broadcast Control System. In early February 2021, Asharq News was awarded the 2020 Broadcast Middle East Award in the category “Innovative Project of the Year”. 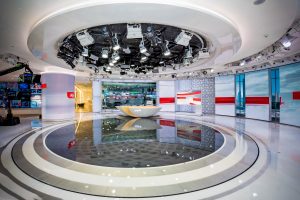 Asharq News has ambitious goals in every respect for the development of its media center. Asharq relied on a team of specialists consisting of an international firm of architects, local construction companies and the general contractor Qvest Media for all technology issues right from the design concept and space planning of the building. Hand in hand, a perfect symbiosis of modern interior and workplace design as well as functional spatial architecture was developed, embedding the editorial, creative and technological work into the set and studio design.

A great add-on service for multi-studio facilities with frequent changes to the studio floor setup, like Asharq, is VSM’s new Wallboxing functionality, which allows moving devices across an API-controlled IP infrastructure and to maintain flow connectivity. In a large production facility, devices like stageboxes, monitors, teleprompters, etc., are likely to be moved around a lot. Wallboxing ensures that existing IP links are re-established when a device is connected to a switchport at the new location.