The Philadelphia 76ers, currently the No. 1 seed in the Eastern Conference, are playing their best basketball inside of the Wells Fargo Center. The team’s stellar play is a result of a talented and stacked roster, but also the in-venue production team’s role of maintaining a familiar environment without fans.

“The biggest thing we’re trying to do is keep that home-court atmosphere for the players,” says Derrick Hayes, director, game presentation, Philadelphia 76ers. “We’re keeping the traditions that our fans and our organization love.” 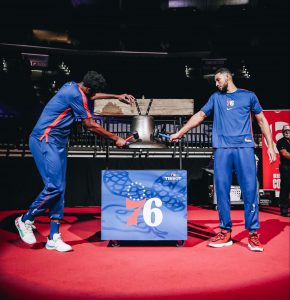 Joel Embiid and Ben Simmons ring the bell prior to tip-off.

In a city that owns a steep, historical lineage that goes back to the signing of the Declaration of Independence, Philadelphia knows a lot about honoring the past. Despite the team playing in front of seats that are mostly empty, the production crew is staying true to what gives character and flavor to games at the Wells Fargo Center. One element harkens back to the city’s foundation and one of its most famous icons, the ceremonial ringing of the Liberty Bell.

“We worked with President [of Business Operations] Chris Heck and Head Coach Doc Rivers to get this done,” says Hayes. “We ended up creating a rotation where the players ring the bell.”

Sponsorship integrations has been one of the harder boxes to check off this season. Normally, fans would digest a litany of in-game content that is attached with a participating sponsor. For example, Frosty Freeze-Out, a time where fans make a lot of noise to distract an opposing player shooting two free throws, is one of the more notable activation. This is still occurring during a game, but with the help of security, team staffers, and others that are allowed into the building.

“We hand out props to our executive team and staff, so they’re holding up thunder sticks, rally towels, and signs,” he continues. “On Media Day, we shot footage of Dwight Howard with a Frosty Freeze-Out sign and he was so amped up that he actually broke it, so the players are into it. It’s funny because you’ll sometimes see [the players] pump up the crowd from the bench.” 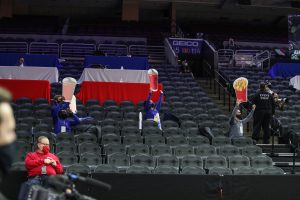 Staffers hold up signs for the Frosty Freeze-Out.

In addition to these activations, pyrotechnics are still being infused during player introductions like they have been for 15 years. Along with these classics, new additions are being put into the rotation. Drip Cam is leveraging the fashion of the players prior to getting onto the court and even the select few sitting in the stands.

“We’re taking photos of them when they enter the arena, and when they’re in the huddle, they’ll peek up at the video to see if their outfits made it up there,” adds Hayes. “We’re also highlighting staff and media, so one game, we highlighted GM Elton Brand and he showed off his blazer and sweater.”

Known for their deep-rooted passion, sports fans in the metropolitan area are invested in everything related to the Sixers. Over the years, these fans have become the heartbeat and soundtrack of games in South Philadelphia. While they’re away, the production staff is poised with generating that same sound through fake crowd noise.

“My DJs and my crew are operating the equipment because it’s important to know the energy of our fans,” says Hayes. “When the officials make a questionable call, we know that our fans would be vocal, so we make sure that the crowd noise is loud.” 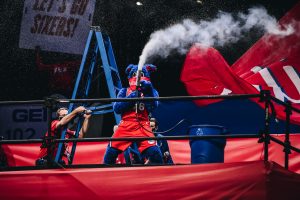 Noise and chants used during a game are mostly generated from NBA 2K, but to add additional authenticity, the Sixers are re-using sounds from other seasons where the seats were packed. For instance against the Boston Celtics, Hayes and company are tapping into the archive to rile up their Eastern conference rival.

“[Celtics Head Coach] Brad Stevens noticed some of the sounds that we were playing during our home opener,” continues Hayes. “I pulled audio from our last home opener against the Celtics and used actual crowd chants from that the game. We’ve been really trying to use authentic voices as well as the stock chants.”

Crowd noise is also being leveraged to provide a more sophisticated audio profile of their in-game entertainment, including host Christian Crosby, team mascot Franklin, the Sixers Stixers drum team, and performers who sing the national anthem, and to pump up the team before tipoff. 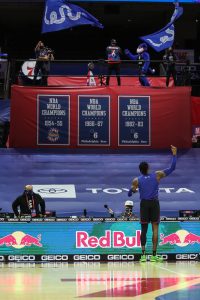 Like other organizations, digital platforms have been used to connect with the team while at home. Before the linear broadcast on NBC Sports Philadelphia, the 76ers’ in-venue and digital teams have come together to produce a 15-to-30-minute pregame show on social media and the team website, dubbed 76 Live.

“Our fans aren’t able to see our entertainment teams, so we partnered up with our social media team,” says Hayes. “They’ve always had a pregame show, but we asked if we could get two or three breaks to insert entertainment, talk about game presentation, and promote different elements, but also talk about how they can be a part of the game as well by downloading our mobile app.”

Segments of the show highlight team performances, staff members within the organization, and the team’s recent play. The live stream serves as a quick primer for the night’s action and gives fans a chance to catch up with the franchise’s major storylines. Another segment also features Crosby and many celebrities from around the areas.

“We came up with a concept where it’s basically FaceTime with Christian Crosby,” adds Hayes. “He’s had conversations with Julius Erving, Lil’ Dicky, and DJ Jazzy Jeff.”

The Ones Who Get It Done: Notable Names of 76ers’ Production Team

MVP candidate Joel Embiid is leading the team on the floor, and while Hayes leads this production, there is fair number of individuals that make his job easier. From those that reside down on the floor next to him like PA Announcer Matt Cord, those that bring the funk like DJ GHOST, and those holding it down in the control room like Game Presentation Coordinator George Scully; Game Presentation Manager Gabriella Papale; Manager, Entertainment Darnell Smith; Director, Entertainment Ashley Malleo; Senior Production Manager Ryan Koletty; and Graphic Media Producer Greg Pepper, the experience inside of Wells Fargo Center would be a lot different without them.

“This season is a true testament to their hard work,” concludes Hayes. “There are a lot of people that have their hands involved, so they’re all rock stars and I appreciate all of them.”

After a double dip in Tampa against the Toronto Raptors, the Philadelphia 76ers return to Wells Fargo Center to host the Dallas Mavericks on Thursday, Feb. 25 at 7 p.m. ET.