The 2021 NASCAR season on Fox Sports has been highlighted by the use of two drones, giving a new look and feel to the productions. The use of two drones is the culmination of a process that began in 2014 and has seen drones used at Supercross, golf events, NASCAR, and more. Sitting down with SVG, Brad Cheney, VP, Field Operations and Engineering, Fox Sports, discussed its evolution, key developments, and what’s next for the use of drones in live sports production. 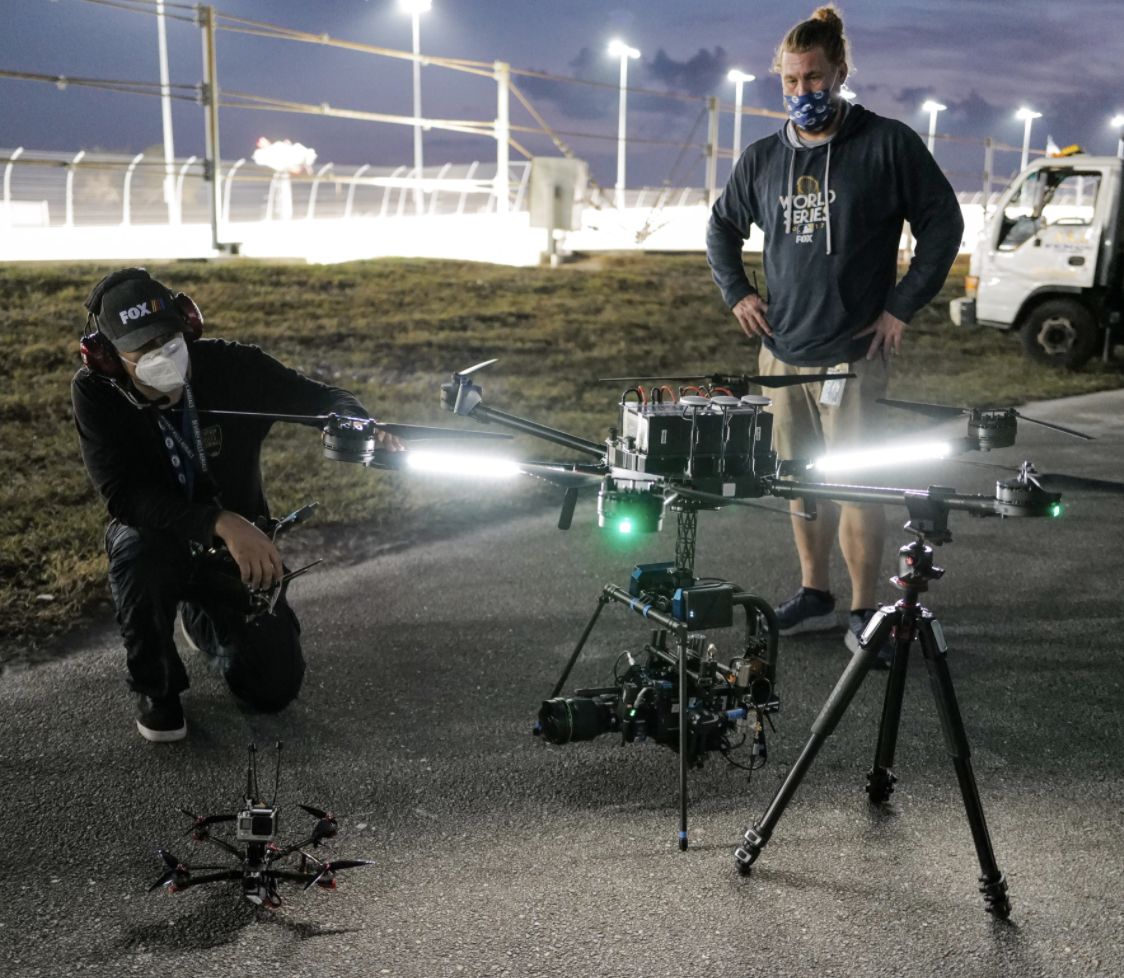 Fox Sports is using two drones for its NASCAR coverage.

Brad, let’s go back to the beginning of your work with drones.

I think the amazing part is how fast everything evolves. Back in late 2014, we were launching our USGA efforts and getting ready for the next NASCAR season. And drones were on the scene because they were legalized [to fly], and that was the biggest thing for us because being able to legally fly was the biggest challenge.

What was your first use of drones?

It was at the Franklin Templeton Shootout in 2014, and it was a big, massive drone that could stay up for, like, eight minutes. It gave us beauty shots as it was really like a high camera. For a good period of time, that is how drones were used: as high-camera coverage with movement, which was still really cool.

What was that system like?
It was loud and noisy because there were more engines on that thing than on most airplanes. We took multiples of them to Supercross, and that was probably the biggest eye-opener because even the big drones were able to keep up with the bikes. The drones could do about 35 mph, and we could race along with the riders and get dynamic shots that showed the speed and agility of what those riders were doing.

That took things to the next level, where we said, How do we get the drones off the track and find places to use them? For us, NASCAR was the biggest opportunity.

What was the challenge during the early days of NASCAR drones?
We still had very limited space to fly, because there are so many people and we had to have a safety zone of 200 ft. between the drone and people. But NASCAR and the racing community have always been great with us, and NASCAR and the drivers wanted to do it as much as we did.

The challenge was finding the spots at a track to fly when you have a quarter of a million people wanting to be as close to the track as possible. We managed to find some spots, flew, and it was beautiful.

What was next?
It wasn’t able to get dynamic [shots], so we asked ourselves, How do we change that? We had only eight minutes to fly. How can you fly when you know it’s going to matter and then come down and get back up again? You never know when somebody’s going to wreck into the wall, so you’re not necessarily there to catch it unless you can stay up longer. In 2018, we tethered a drone that could fly for long periods of time, but again, it was a high, wide shot as it couldn’t hold a large zoom lens.

Heading into last year, there was a really big jump as racing drones started to be able to carry camera and transmitter payloads that were ready for broadcast. These pilots were flying them with goggles that gave them and us a first-person view.  These pilots were amazing, using these FPV drones for promotional things like scaling a tall building, and, suddenly, we had the speed and dynamics in drones we needed for racing. We got together with Beverly Hills Aerials, who can fly the really big drones, but they also build their own FPVs. Now we had the speed and the video, so we knew it would be amazing to bring that to the Daytona 500.

What did those smaller drones bring to the show?
We had them whipping around and saw that they provided amazing shots as they were flying up to 90 mph. But they weren’t able to get those beauty shots along the backstretch. And then, when the pandemic hit and everything shut down, we suddenly could fly literally everywhere but over the track itself.

That propelled this forward. We could have the access to do things like having the drone spin around the winner doing a burnout and keeping up at the same speed as the car. But we also still needed the bigger drone for the middle of the race.

How should people evaluate whether drones are good for their show?
There isn’t just one type of drone, so you need to find the right one. They keep changing, and they do get twice as good each year. What you can do with them changes. At Daytona, we had a Sony P50 camera with a Canon 22X lens. That wouldn’t be possible without the drone improving lift capabilities and run time.

We have massive and powerful drones and others that are very sleek and fast, so it’s about being able to utilize all those pieces.

What else are you hoping to do with drones this year?
We can’t wait to show you what we can do outside of racing again with the Westminster Dog Show and then later in the summer for MLB’s Field of Dreams game being played in Iowa.

Where are we with respect to flight times?
It’s getting a little bit better, about 10% better each year, and we’re at about 14-15 minutes depending on the load and the speeds the drone flies. As for the smaller drones, they can do up to 20 minutes unless you start ripping it at 90 mph for the run.

What happens when fans get back?
Safety is the continuous conversation that exists; the laws and venue rules always change as time moves on. To that point, there are technically no laws limiting flying over people, which used to have a 200-ft.–plus buffer. It is all about a conversation between all the parties involved with the production and the event alongside the risks and liabilities that exist.