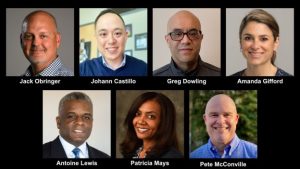 “The quality of our content and the personnel who make it happen play a critical role in our collective success,” says Williamson. “We are invested in the continued growth and development of our employees and leadership is more important than ever.”

Jack Obringer, Vice President, Production – Obringer is responsible for multiple aspects of production of the nighttime editions of SportsCenter. He also oversees SportsCenter’s highlights screening team and the production of wraps. In addition, he oversees the RISE (Reveal Innovative SportsCenter Elements) unit, which is charged with increasing time spent viewing and creating in-show bumps, teases and creative elements to drive viewership.

Greg Dowling, Senior Coordinating Producer – In addition to continuing to oversee the 6 p.m. edition of SportsCenter, Dowling has added the responsibility for SportsCenter with Stephen A. Smith and all content produced by Rydholm Productions including Pardon the Interruption, Around the Horn, and Highly Questionable.

Amanda Gifford, Senior Coordinating Producer, Content Strategy & Audio – Most recently adding oversight of audio play-by-play and podcasting to her duties, Gifford also will continue to focus on content strategy and planning across platforms in addition to her audio content and Talent Production Group oversight.

Pete McConville, Senior Coordinating Producer – In addition to overseeing Get Up!, Keyshawn, JWill & Zubin and the editorial graphics production team, McConville also is playing a lead role in developing talent, both on-air and behind the scenes.