NCAA March Madness Live will debut an all-new design and cohesive multi-platform viewing experience with an emphasis on dynamic live video viewing for the 2021 NCAA Division I Men’s Basketball Championship. The updated design will feature a reimagined Game Center with an all-new, easily navigable look and seamless integration into connected devices and mobile devices to fuel interactive game experiences. The launch will also usher in the debut of The Catch Up presented by AT&T 5G, giving fans a recap of key moments from live games, and the return of the fan-favorite Fast Break presented by AT&T 5G and Nissan. 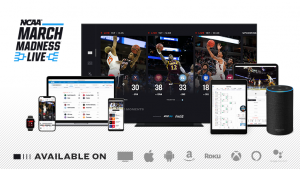 NCAA March Madness Live, managed by Turner Sports in partnership with the NCAA and CBS Sports, is available now to download across mobile devices and 18 platforms, including Apple devices, Amazon Fire TV, Roku, Xbox One, and for the first time, Google TV, offering fans direct access to live coverage of NCAA Tournament games.

For the tenth consecutive tournament, Turner Sports and CBS Sports will provide live coverage of all 67 games from the 2021 NCAA Division I Men’s Basketball Championship across four national television networks – TBS, CBS, TNT, and truTV – and via NCAA March Madness Live.

Fans can access all tournament games telecast on CBS via the web and on mobile devices with no authentication required. Additionally, fans can watch games via live streaming on TBS, CBS, TNT and truTV’s digital platforms, as well as participating TV provider websites and apps.

The enhancements follow a record-breaking performance in 2019 when NCAA March Madness Live recorded the largest live audience in its history.

Some of the new and returning features fans can access on NCAA March Madness Live include:

Game Center is the central hub of NCAA March Madness Live providing all the news, highlights, and interactive content needed to augment the fan experience. For the first time, Game Center will be featured on all connected devices and include Condensed Games presented by AT&T 5G to give fans the most important moments of live game action. To fuel engagement and connection with users, Game Center will debut a new tab featuring interactive widgets that will introduce polls, quizzes, alerts and more. The widgets will be updated during every game to create a unique experience alongside video viewing.

NCAA March Madness Live will debut an all-new feature for this year’s Tournament, The Catch Up presented by AT&T 5G. The video feature will provide users with a succinct summary of any key plays or moments in the game before they start watching live streaming coverage. For the fourth consecutive Tournament, Fast Break presented by AT&T 5G and Nissan will exclusively provide an all-encompassing look at live Tournament action from a single viewing location. This live, whip-around coverage will also offer quick turnaround highlights, real-time analysis by industry stars, social reaction and commentary for all games. Fast Break will be available when there are multiple games being played during the first two rounds of the Tournament, Friday through Monday, March 19-22. AT&T 5G will present Fast Break coverage on Friday and Sunday, with Nissan serving as sponsor for Saturday and Monday.

In addition, Matchup Analysis will allow fans to choose from over 20 stats to personalize their bracket picking experience as part of Bracket IQ presented by Invesco QQQ. Fans will also gain extra insight with Path to the Championship, which will let fans calculate possible tournament outcomes based on remaining games in the bracket, giving users a visualization of their best possible ranking. Path to the Championship will be available starting during the Sweet Sixteen on the NCAA March Madness Live mobile app.