Fox Sports’ Brad Cheney: ‘We’re glad to have gotten to this point: back in the venues we love’

On a day when so many are reflecting on where they were when the country essentially shut down due to the COVID-19 outbreak, many are reminded of the Big East Tournament.

It was a year ago today that a Big East Tournament game between St. John’s and Creighton was called off at halftime. This week, Fox Sports is back at Madison Square Garden and, in a fan-less building, is putting on an impressive series of game productions that test the limits of the industry’s newer production enhancements. 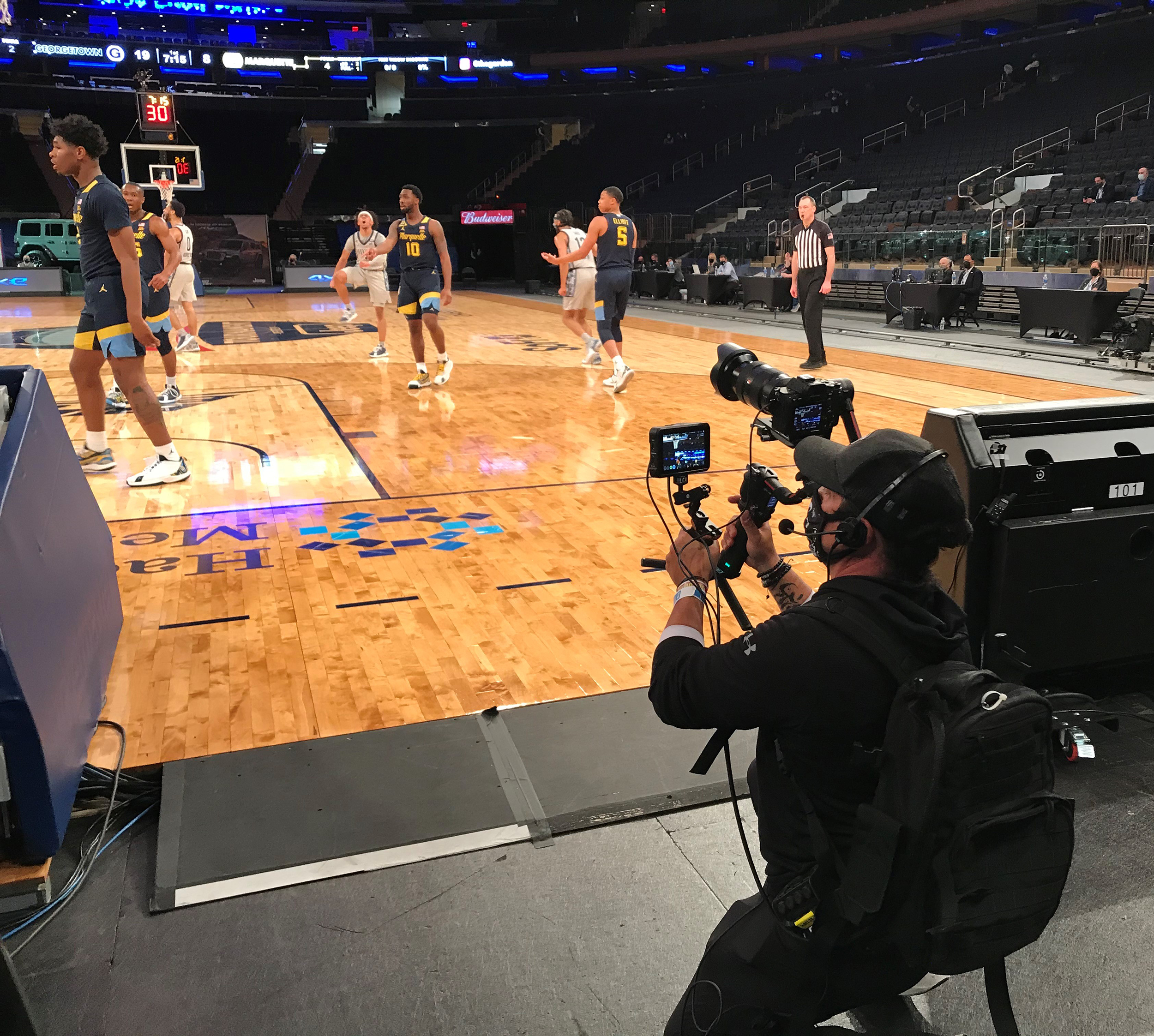 “Heading into tournament season, we’re all glad to have gotten to this point and gotten back into these venues that we know and love,” says Brad Cheney, VP, field operations and engineering, Fox Sports.

Fox is onsite in New York City with Game Creek Video Encore mobile production unit and a gear complement comprising more than 25 cameras, 64 channels of replay, and a 1080p infrastructure that offers an upconverted 4K viewing option for selected audiences.

With few fans in the building, Fox is taking advantage of the opportunity to make itself comfortable inside MSG, tweaking its Rail Cam system, deploying the popular Megalodon mirrorless camera, and allowing handheld-camera operators to roam more around the court. In addition, with the studio show taking place in Los Angeles, Fox is doing internal transmission over 5G bonded cellular for the first time ever at this event.

With the Rail Cam, Fox is working with vendor partner Fletcher to increase both the stabilization and the speed of the unit. Given more sideline space to work with, Cheney thinks the crew can deploy the Rail Cam in new and exciting ways. 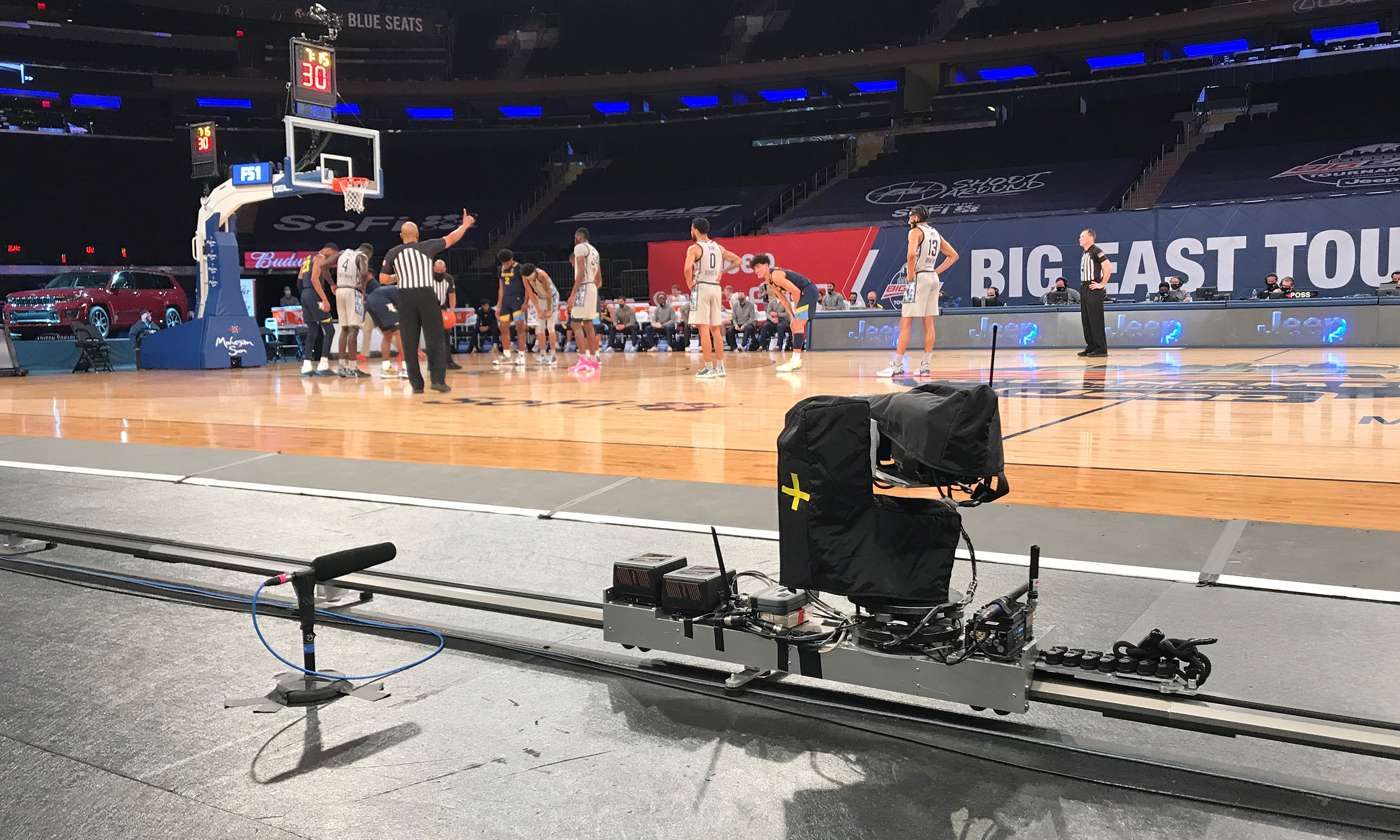 With more space on the sideline, Fox Sports is looking to increase the speed and improve the stability of its Rail Cam system.

“The Big East Tournament at the Garden is one of the most well-attended tournaments in the country,” he says. “It’s an interesting element this year to have more space on the baseline and the sideline. We’re looking forward to that. To get close to the players is exciting for us because we have had a long college basketball season with many of our cameras positioned very far away. It’s going to be nice to get closer.”

As for the Megalodon, the mirrorless camera and stabilizing gimbal rig has become a regular on Fox Sports productions since debuting late in the NFL season. It has been deployed for Premier Boxing Champions, the Daytona 500, and Liga MX (on Fox Deportes). It makes its college-basketball debut this week but with a new lineup of lenses. According to Cheney, the operator will swap between two lenses throughout the tournament: a 28-80mm zoom and a 200mm prime lens. When it was first used on NFL games, the Sony a7R IV was outfitted with a Sony FE 24-70mm f/2.8 GM lens. 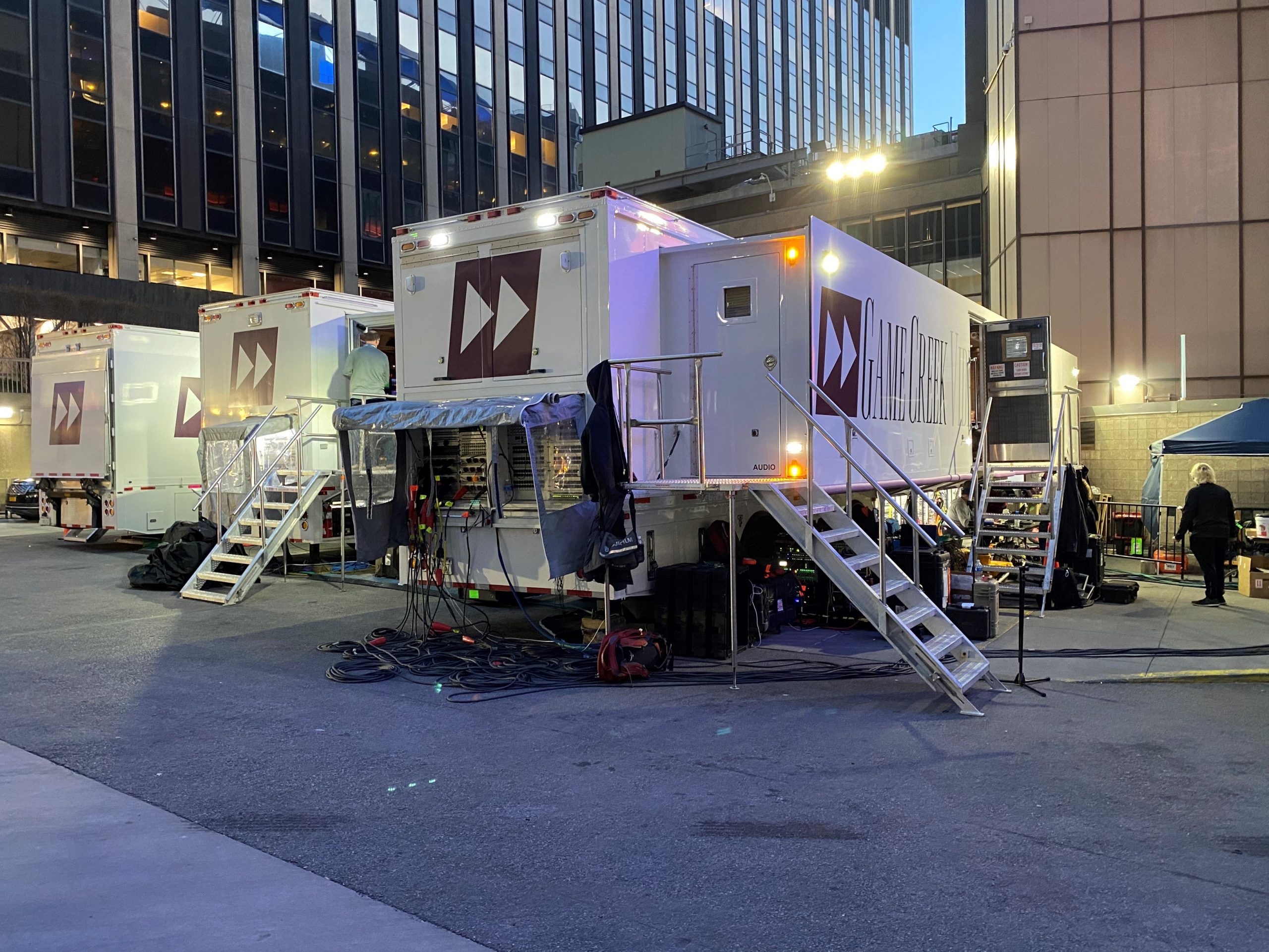 “It should give you the same look with a close angle while [the operator is] far away,” says Cheney, noting that the camera operator can’t get as close to the players as  on NFL broadcasts.

Cheney also notes that what would traditionally be the broadcast’s midcourt handheld has been turned into a hard camera. Handheld cameras are positioned about 12 ft. further back than they typically would be for this event, but the freedom to move around offers interesting flexibility.

“That ability to get and mix in different shots is an exciting advantage for us,” says Cheney. “Our directors and producers have been very happy with what those angles have been able to give them. A handheld being able to be mobile in that zone gives some really impressive angles — and new angles — for fans to watch.”