When March Madness was canceled last year, it was a devastating blow for players, coaches, and fans — and the people who work behind the scenes to make the NCAA Division I Men’s Basketball Tournament a sports-media phenomenon.

That includes the team behind live-streaming and second-screen app NCAA March Madness Live (MML). Following a full year’s worth of development, the product team behind the popular platform had the rug pulled out from under them at the 11th hour. 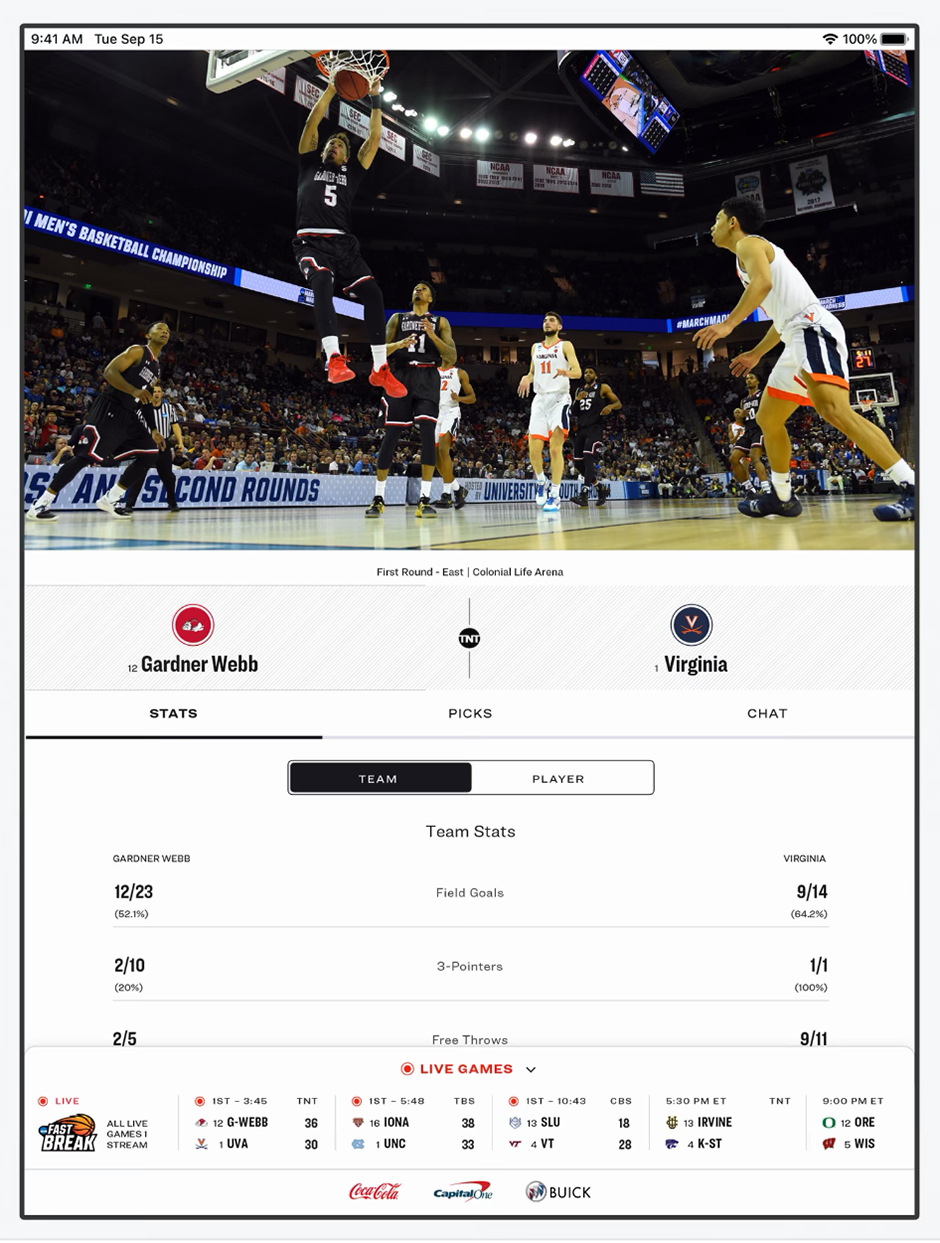 There was a silver lining, though. Prior to the pandemic, a complete redesign (frontend to backend) of March Madness Live was planned for 2021, the tenth year of the product.

That’s the app that college-hoops fans will enjoy this year. Managed by Turner Sports in partnership with the NCAA and CBS Sports, the app offers a new live-streaming backend infrastructure; some flashy enhancements, such as a new Game Center; a new video highlight feature called The Catch Up Presented by AT&T 5G, and more-prominent positioning for the streaming-exclusive whip-around show, Fast Break Presented by AT&T 5G and Nissan.

“Despite all of the remote work and the craziness of this year,” says Hania Poole, SVP, digital, Turner Sports, “this team came together to completely redesign the product experience, both to modernize our backend technologies and to put a new look and feel on MML products and experiences. I am super-excited that they were able to accomplish this.”

According to leaders behind MML, losing the 2020 tournament was a bitter pill, but it was also a welcome opportunity to get a head start on the next year’s product rebuild.

“Having that to look forward to,” notes Matthew Mullen, director of product, NCAA, Turner Sports, “helped make last year just a little bit easier to swallow. We put so much blood, sweat, and tears into this that to not have the [tournament] was hard. But it was a good thing to have this to pivot to.”

As a driver of the redesign, the March Madness Live product team initiated a 10-month research project, using both qualitative and quantitative analysis to draw fresh conclusions as to what fans want from a platform of this class. 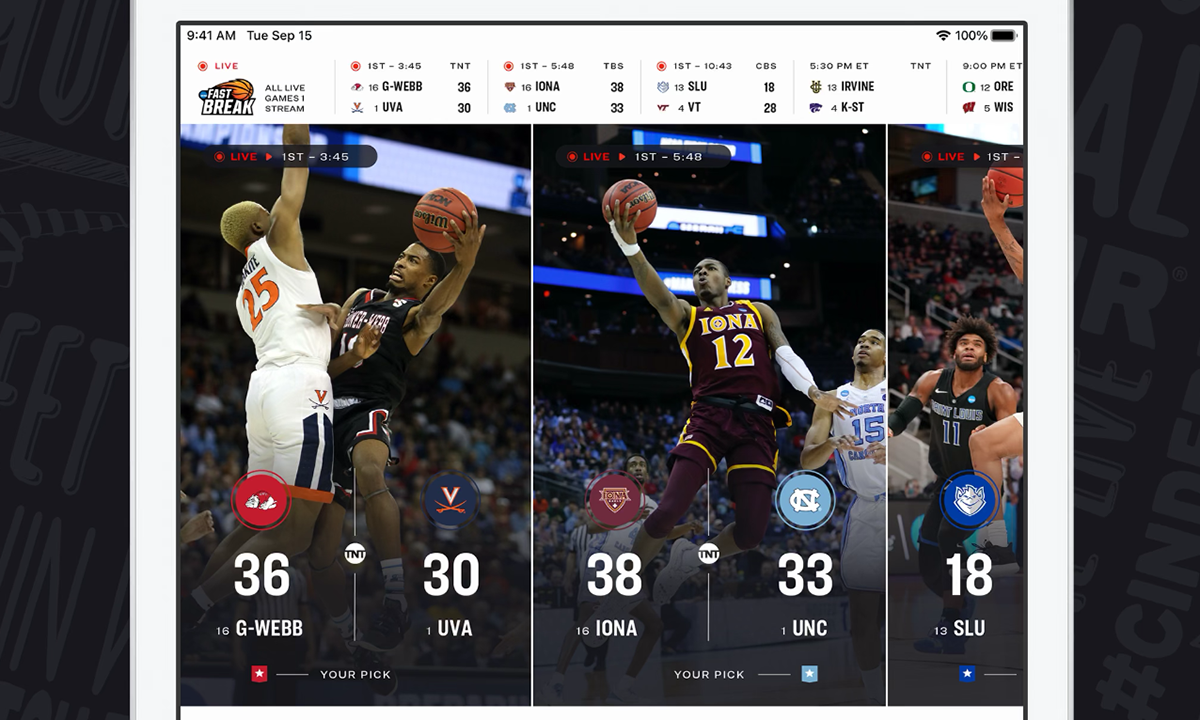 “While our core is video — and that’s the cornerstone — [we wanted to determine] what is a meaningful experience with other fans in these platforms,” says Poole. “We are closely evaluating that as the landscape changes. Frankly, it’s not that the live game doesn’t matter anymore; it’s [that the] people in those experiences and how they connect with each other matter even more.”

The study also helped the team reconsider its approach to effective digital advertising. One new piece of March Madness Live that’s sure to make fans happy is that the platform has removed the pre-roll ad when jumping into a live game. Instead, fans will be placed in the game immediately and greeted by a “branded toast,” a dynamic overlay ad at the bottom of the video player.

“Fans are fairly tolerant of ads,” says Turner Sports Senior Director, Business Operations, Joanna Lieberman, “but their biggest frustration is any roadblocks that get in their way when trying to get into a live game. We were able to find some ways within our app to pull down that barrier. We’re still able to deliver on the sponsorship side while meeting the fan’s need to get quickly into a live game.”

A key goal of the MML development team was to develop a look that was consistent across every single platform, regardless of device.

That design begins at login, with a dynamic Spotlight area featuring large hero images with score information to showcase current games. Hovering the mouse over an image provides an auto-play glimpse of the current live broadcast. The thought is that peeking into the game will entice users to click through to watch the broadcast. 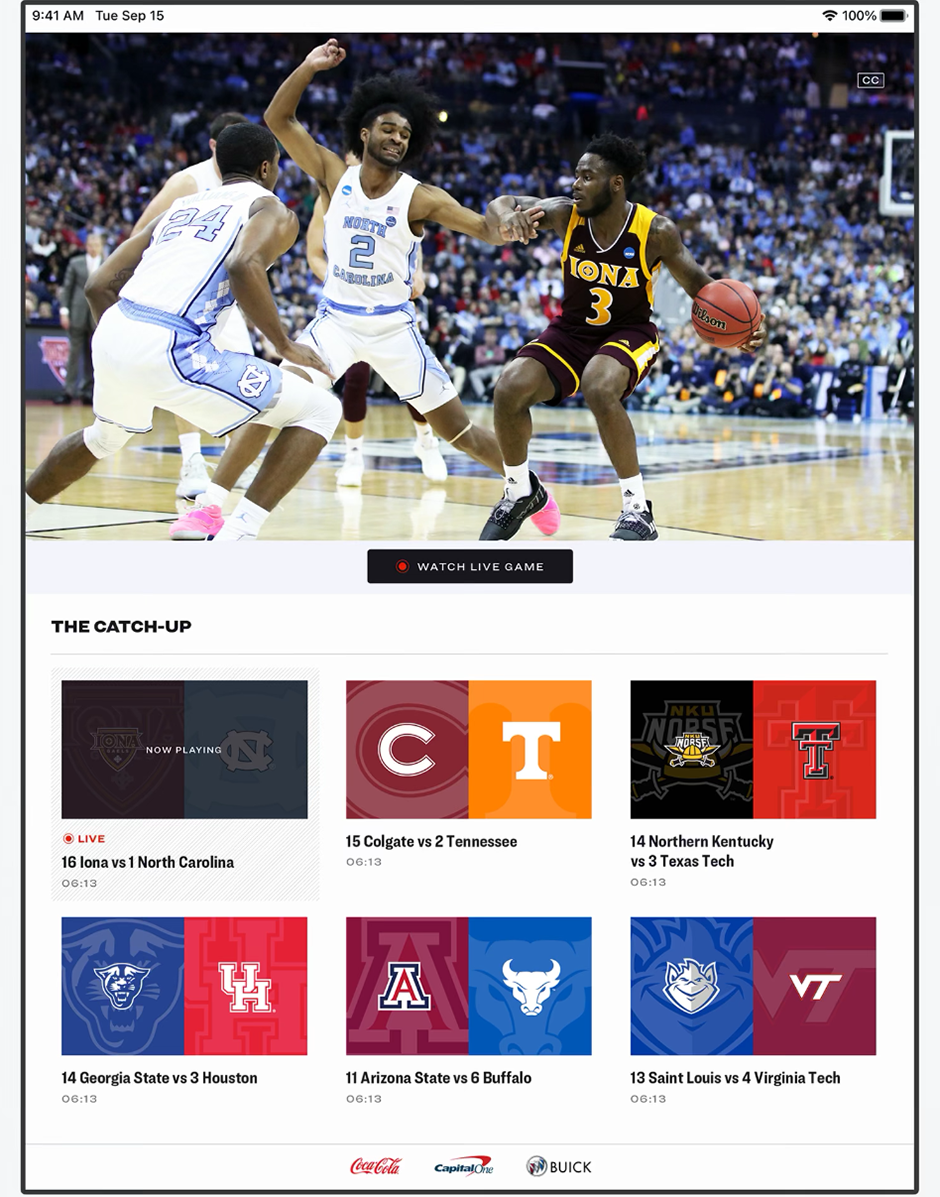 The Spotlight area also uses its valuable real estate to promote other products, such as the Fat Break show, high-profile VOD content, and articles.

Further down in the app are neatly curated content “swim lanes,” which include the new feature, The Catch Up. Short video highlight reels of active games allow the user to see some of the big plays in the game before accessing the live game. The highlight reel updates dynamically as the game progresses, with the video updating approximately every two minutes.

Below that, users will be able to access full condensed versions of completed games — another new feature in this year’s product. Both The Catch Up and full condensed games are powered through a partnership with WSC Sports, a supplier of AI live-video–clipping software.

In a fun quirk, the popular Boss Button, which previously allowed users to hide the streaming platform behind cleverly designed skins that look like work documents, has been reimagined for a work-from-home world. Instead of a fake Excel spreadsheet, clicking the Boss Button will call up a fake Zoom call with famous college mascots.

MML also offers the features that users have come to expect from the platform over the years, including its native bracket-challenge game, matchup analysis, and the ability to automate picks using various data sets built into the platform.

NCAA March Madness Live is available to download across a product-high 18 platforms, including most mobile devices, Apple devices, Amazon Fire TV, Roku, Xbox One, and, for the first time, Google TV.

Fans can watch all tournament games telecast on CBS via the web and on mobile devices via March Madness Live with no authentication required. To stream games airing on TBS, CBS, TNT, and truTV, users will need to authenticate with their cable-provider credentials.