The joint production will utitlize 10 crews, additional robotics to operate safely in Indiana

When it comes to logistics, it simply doesn’t get any harder than NCAA Division 1 Men’s Basketball Tournament. Producing 67 games in three weeks across a multitude of venues is no easy feat under the best of circumstances, let alone amidst a pandemic. Nonetheless, CBS Sports and Turner Sports have worked with the NCAA to create, within the tournament’s bubble in Indiana, a production workflow and infrastructure that achieve the level of production quality that viewers have come to expect from CBS/Turner March Madness broadcasts over the past decade. 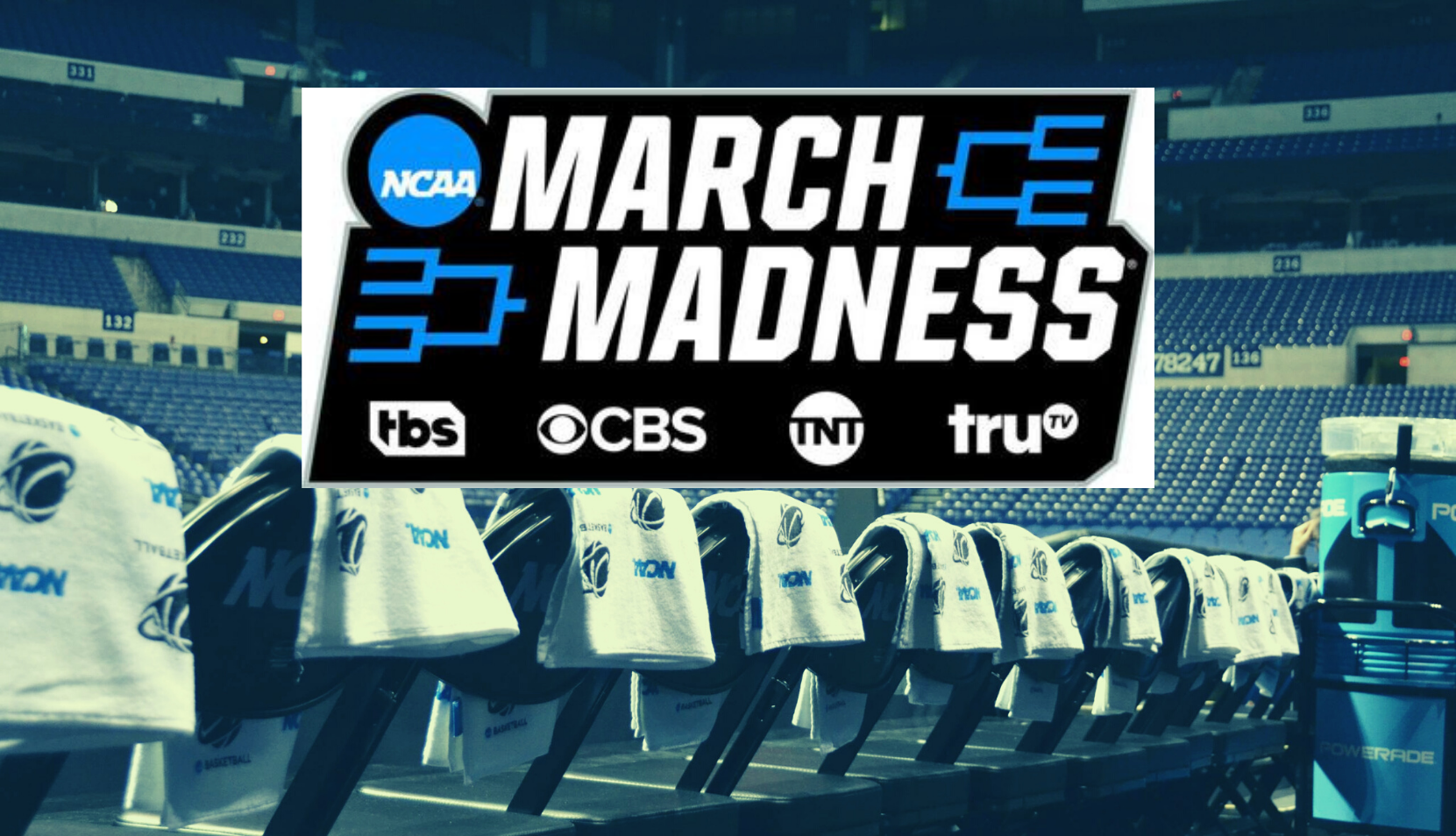 “Over the course of the last year, both CBS and Turner have done various iterations of production,” notes Turner Sports EVP/Chief Content Officer Craig Barry. “There’s no question that building a bubble infrastructure and having everybody in the building — [including] production crews and talent — is the most effective and best execution if we have the resources to do it, which we do for March Madness. We’re excited about that. A lot of time and effort has gone into the planning with our partners at the NCAA and CBS, and we feel like we have put ourselves in the best position to pull off a great tournament.”

Despite the entire tournament’s taking place in a single location this year (in and around Indianapolis), CBS and Turner have deployed 10 discrete production and announce crews onsite for the opening rounds – up from eight in previous years. Games will be played on two courts inside Lucas Oil Stadium, as well as at Bankers Life Fieldhouse, Hinkle Fieldhouse, Indiana Farmers Coliseum, Mackey Arena in West Lafayette, and Simon Skjodt Assembly Hall in Bloomington. 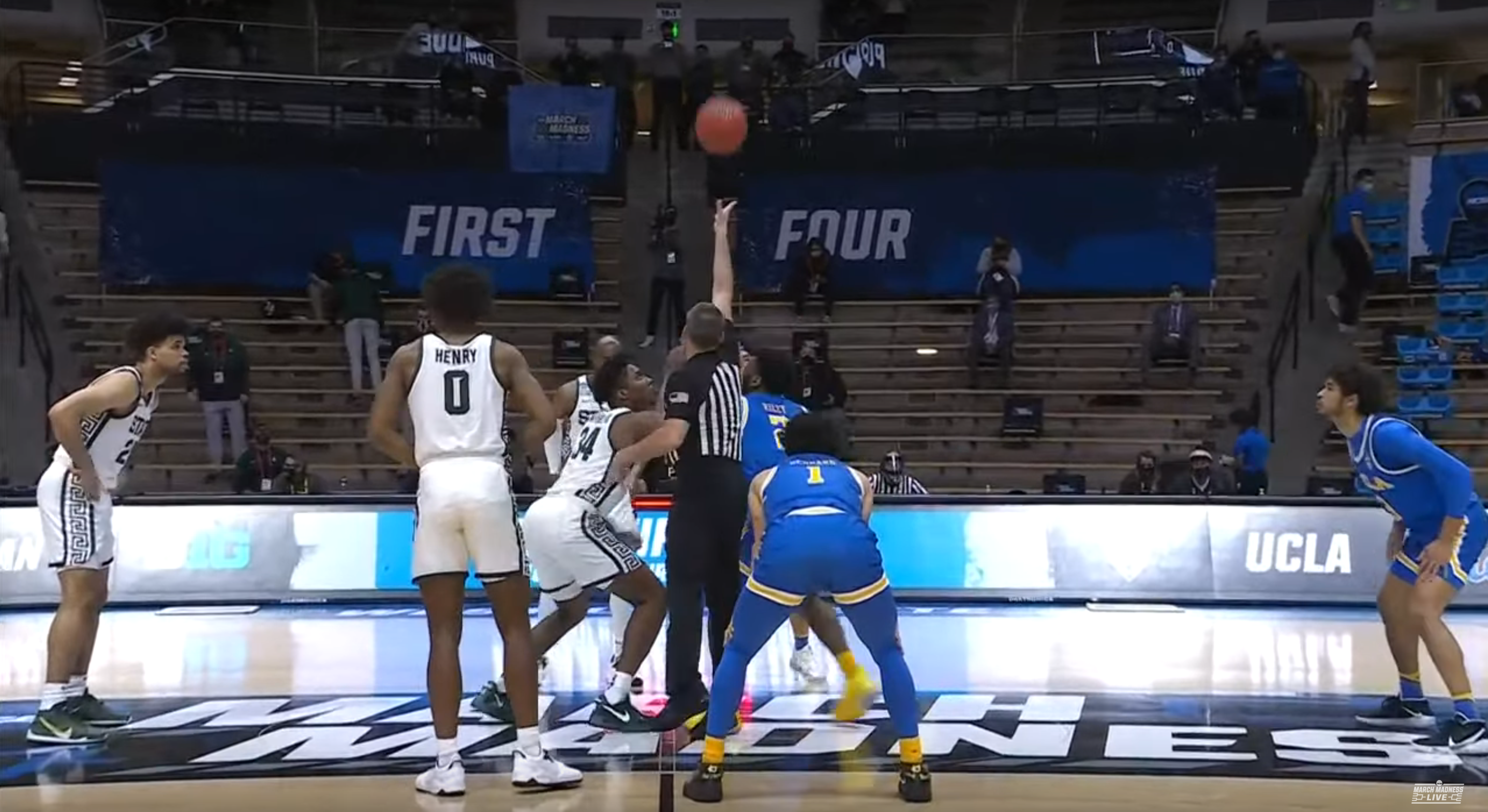 “This tournament will be unique,” says Harold Bryant, executive producer/EVP, Production, CBS Sports. “Being in Indy with all of our crews and all of our production setup is a unique challenge that we are going to take advantage of to make it an even better presentation than we’ve done in the past for the tournament. We’re going to be flexible and ready to go for this year.”

He adds that CBS and Turner are “definitely leaning into technology” this year in an effort to overcome the challenges presented by the pandemic. Most notably, production teams will deploy more robotic cameras than ever, including a pan-bar system as the primary midcourt camera, to limit the number of manned positions. The much touted RailCam and SkyCam systems will also be back for selected games.

Bryant notes that a video editor in Australia and a producer in New York have already begun collaborating on teases, bumpers, and features and “it seems like they’re in the room together.”

Adds Barry, “Disruption breeds innovation and creativity, and this is no different. Some of the technology is by design, and some is by necessity. We feel really confident that we have a great mix of technology and innovation. We’re trying to create as much access as possible — to the game, to the court – and get the fan as close as possible. With all the social distancing, we wanted to make sure that that priority stayed intact. And that’s where the technology comes in.”

Crew sizes are similar to those in years past, according to Bryant, but individuals are more spread out in the trucks and the venues, and some people are filling different roles this year.

“The placement of cameras is different,” he explains, “so a cameraperson who might have been a handheld operators is doing a different job this go-around. We’ve done our best to keep the crew levels about same. I haven’t gone side-by-side, but we actually have more coverage this go-around because of all the robotics and the extra positions that we have available to us.”

CBS and Turner have worked to ensure that camera and production levels are roughly equal at every venue.

As has been the case with sports bubbles thus far, access at each NCAA venue in Indianapolis has been broken down into tiers: Tier 1 is on-court access for players, coaches, team staff, and refs; Tier 2 is for NCAA officials and necessary employees, who are required to be 12 ft. off the court; in Tier 3, broadcast and production teams must be an additional 25 ft. back (roughly 37 ft. from the sideline).

The bubble format is nothing new to Turner Sports, which worked with ESPN and the NBA in their 2020 bubble at the ESPN Wide World of Sports in Orlando. However, one big difference in Indy will be much more limited on-court access for announcers and production crew.

“The differences would come in what the NBA referred to as the RED zone, where the players were and we potentially had some access for sideline reporters and A2s,” says Barry. “That’s not the case for Zone 1 for the NCAA. That’s exclusively for the teams and the kids and the players. I would just say that It’s similar [to the NBA bubble], but it might be a little bit tighter.”

As for fans in the stands, the NCAA currently plans to allow 25% capacity (including team staff, event staff, and TV crews) at each venue, with everyone required to wear masks and socially distance.

Although fans will be present, CBS and Turner will be using enhanced crowd noise to augment the broadcasts.  “We’ll have a virtual audio in every building,” says Barry. “We’ve made a significant investment, and our experience with our events in the past have led us to believe that it’s just an overall better fan experience with the virtual audio.”

With the stands less than full, production teams at all the Indy venues are exploring camera positions that have become available. According to Bryant, the traditional high-slash position will be moved lower, and reverse positions that typically would block seats will have more freedom to shoot the on-court action.

“We are looking at alternative camera positions,” he says. “Now that there are no fans, we can move a few cameras. We’re just using the innovation to help make a better broadcast.” 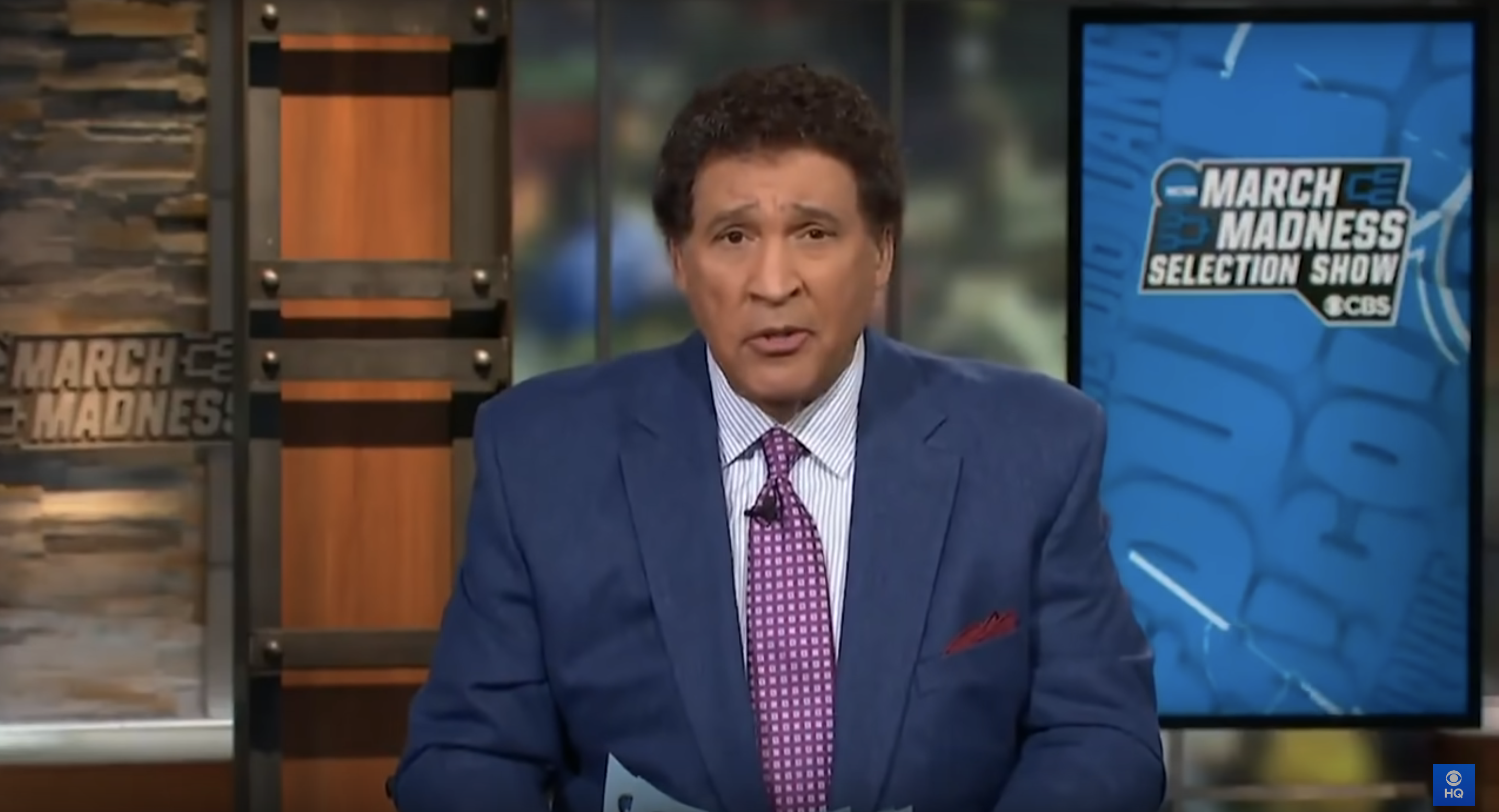 While the entire tournament will take place in Indiana this year, CBS and Turner will be hosting their studio show from New York City (where Greg Gumbel is seen here during Sunday’s Selection Show) and Atlanta, respectively

Although the bubble format presents its fair share of challenges, hosting all games in a single geographic area has created efficiencies for CBS and Turner. With 10 discrete production and commentator teams located within a few miles of each other, the broadcasters have established redundancy should a positive COVID-19 test result or other circumstances knock out one of the crews.

“There are 10 teams and seven courts, so there’s always a team available to back up other teams,” Bryant notes. “If we need to make the changes or move people around or even if there’s a bigger game and we want to ramp it up a little bit, being in one area is an advantage for us. We have not only the flexibility and the backups, but we can create a narrative around the city and add more excitement to it.”

He adds that the team has made an effort to ensure that every venue is roughly equal to the others, allowing any crew to work at any venue using the same camera complement and production workflow. “We’ve tried to make it equal across the board, so it’s easy for a crew to work in any venue.”

Barry adds that CBS and Turner won’t shy away from acknowledging the fact that this year’s tournament is all in one place. “Harold and I had pretty philosophical conversation about leaning into what this actually is, which is a March Madness in a single state. We are going to be authentic and honest about what we’re doing and how we’re doing it. It’s going to be part of the narrative, and we think we can develop something really special.”

Graphics Package Gets an Energetic Facelift 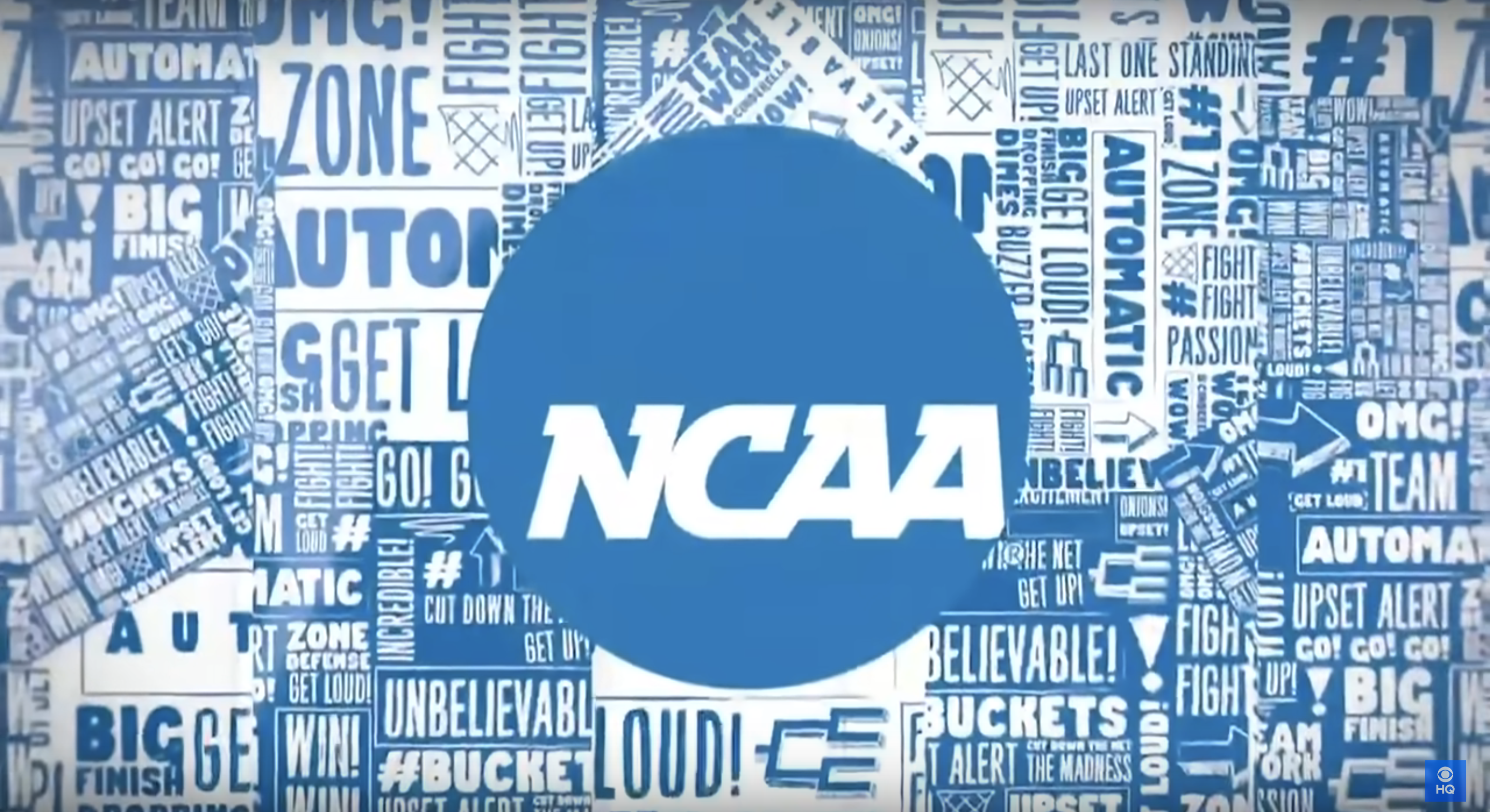 In advance of last year’s tournament, CBS and Turner creative teams worked together to build an entirely new March Madness graphics package and scorebug. However, with the 2020 tournament canceled, this week will mark the debut of the package, now more than 18 months in the making. In addition, for the first time, the on-court virtual shot clock seen on Turner’s NBA on TNT coverage will be used on the live broadcast.

Bryant describes the new package as a “much more modern look, it’s very light, and It feels like college. It doesn’t feel like any other sport that either one of us do, and it’s got a lot of energy.”

The overall package is anchored by a “Hype Wall,” essentially a word cloud composed of hundreds of buzzwords and fan-related phrases. Barry believes the Hype Wall will bring another level of excitement and fan engagement to the broadcasts.

“I think the design itself is very progressive and relevant but still has a lot of traditional aspects of a broadcast package,” he says. “Quite frankly, when I saw the mocks early on a couple of months ago, I was blown away at the possibilities of it. Then I saw the finished product, and it was awesome. Generally, I’m very opinionated about the creative, the content, the design, and I really didn’t have anything to add. They nailed it.”