NFL Network, ESPN/ABC Crews Will Be On-Site for NFL Draft in Cleveland

The NFL has announced that the 86th annual NFL Draft will take place April 29-May 1 across iconic downtown Cleveland locations, including FirstEnergy Stadium, the Rock & Roll Hall of Fame and the Great Lakes Science Center. A select number of prospects will take the stage in Cleveland while fans, media, NFL Network, ESPN and ABC crews will also be on-site. Additional prospects will also participate in Draft festivities remotely from their homes around the country. 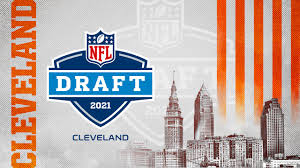 Club personnel involved in the selection process will be permitted to gather in a Draft Room at a location of their choosing, whether that be their facility or elsewhere while following appropriate protocols.

“We are thrilled to be heading to Cleveland for the NFL Draft, which has become one of the most highly anticipated events in sports” says Peter O’Reilly, NFL Executive Vice President, Club Business & League Events. “Just months after executing a safe and successful Super Bowl LV, we look forward to bringing the excitement of our Draft traditions to fans in collaboration with the Browns, Destination Cleveland, Greater Cleveland Sports Commission, the City of Cleveland, and all of our local Cleveland partners.”

Set against the backdrop of Lake Erie, the NFL Draft Main Stage will serve as the central hub for Draft activities, including where pick announcements will be made by Commissioner Goodell and other special guests. In addition to picks being made in Cleveland, the NFL and clubs will partner to make selections from across the country on Day 3. The Draft Theatre will act as the viewing zone for the Main Stage and will seat invited guests, including individuals selected for the exclusive “Inner Circle presented by Subway.”

Tapping into the spirit of the Rock and Roll Hall of Fame, headlining acts will perform each day on the Main Stage.

Utilizing learnings and protocols from Super Bowl fan experiences in Tampa, the NFL Draft Experience – the NFL’s interactive football theme park – will be free and open to the public around FirstEnergy Stadium during all three days of the Draft. To manage capacity, reservations will be required to attend the free Draft Experience through the NFL OnePass app, which will be available for download the week of March 29.

The league will continue to partner with public officials at the state and local levels to help better ensure a safe and successful Draft. Fans attending Draft activities will be required to wear face coverings and adhere to appropriate physical distancing.