Overwatch League is detailing exciting enhancements that will make the viewing experience even better and more rewarding. These improvements include video clipping, matches in 4K, and always-on player cameras. 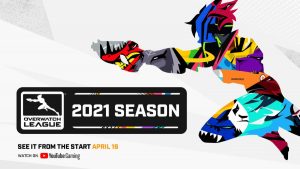 For the first time in the history of the Overwatch League, fans will be able to enjoy each and every match this season in glorious 4K quality. Live and on-demand 4K matches will be available on the league’s YouTube channel, website, and mobile app on capable devices.

Also new this season, all Overwatch League matches — live and on demand — on YouTube will feature clip functionality that allows fans to clip and share their favorite moments, for up to 60 seconds of video. For more information about how this feature works, go here.

Player Cameras
Another new enhancement is always-on player cameras. The camera setups will allow fans to see more live shots of all the players competing — generally when matches are observing an individual player in first-person, the broadcast will also show their player camera feed live as well. Overwatch also plans to incorporate live player comms into the show at select moments, so fans can get even closer to the action and favorite players.

Watch and Earn
Continuing throughout the 2021 season, fans will be able to watch live matches and earn rewards. Users need to create a Blizzard account and link it with their YouTube account to start enjoying the Overwatch League Perks by T-Mobile. This season, fans will be able to earn League Tokens to use on a wider selection of Overwatch League skins and sprays — including two new Legendary skins, a custom Opening Week spray designed by Soe Gschwind, and more.

Encore Matches
With teams playing in North America, Europe, China, and South Korea this season, watching teams live isn’t always a convenient option, but to make it a little easier, Overwatch is trying a few things out to help fans catch all the action this season.
The league has designated 24 matches featuring the New York Excelsior, Philadelphia Fusion, and Los Angeles Valiant as Encore matches, which are match replays at times better suited to fans in North America. Encore matches are different from normal match VODs because fans can still earn viewership rewards and enjoy watching together with other fans on the Overwatch YouTube channel, website, or mobile app as they air.
All Encore broadcasts will begin at 12:30 p.m. ET and lead into Watchpoint for that day’s East region schedule. Encore matches will be flagged on the Overwatch League website schedule at the start of the season.
Improved Ticker
Overwatch is also introducing a new match scores ticker and a spoiler-free mode that allows fans to hide match results on the scores ticker, schedule, and standings sections.