The flexible facility debuted for the LCS Mid-Season Showdown

As the League of Legends Championship Series (LCS) prepares to host its first in-person event since the pandemic began, Riot Games has unveiled a high-tech, sleek new studio able to flex between IRL (in real life) and online event productions. Located at the LCS Arena in Los Angeles and having debuted March 20 at the start of the LCS Mid-Season Showdown, the facility features four discrete locations for the host to seamlessly move through during LCS broadcasts.

“We don’t have a physical main desk in the studio,” notes Riot Games Creative Technology Producer Justin Restaino. “That was one of the more important [concepts] that we started out with at the very beginning. We wanted to be able to build an area where we could utilize the full space of the room and not constrain our talent to any one physical space. We are now able to have a malleable, versatile set that allows for very different types of segments and storytelling.” 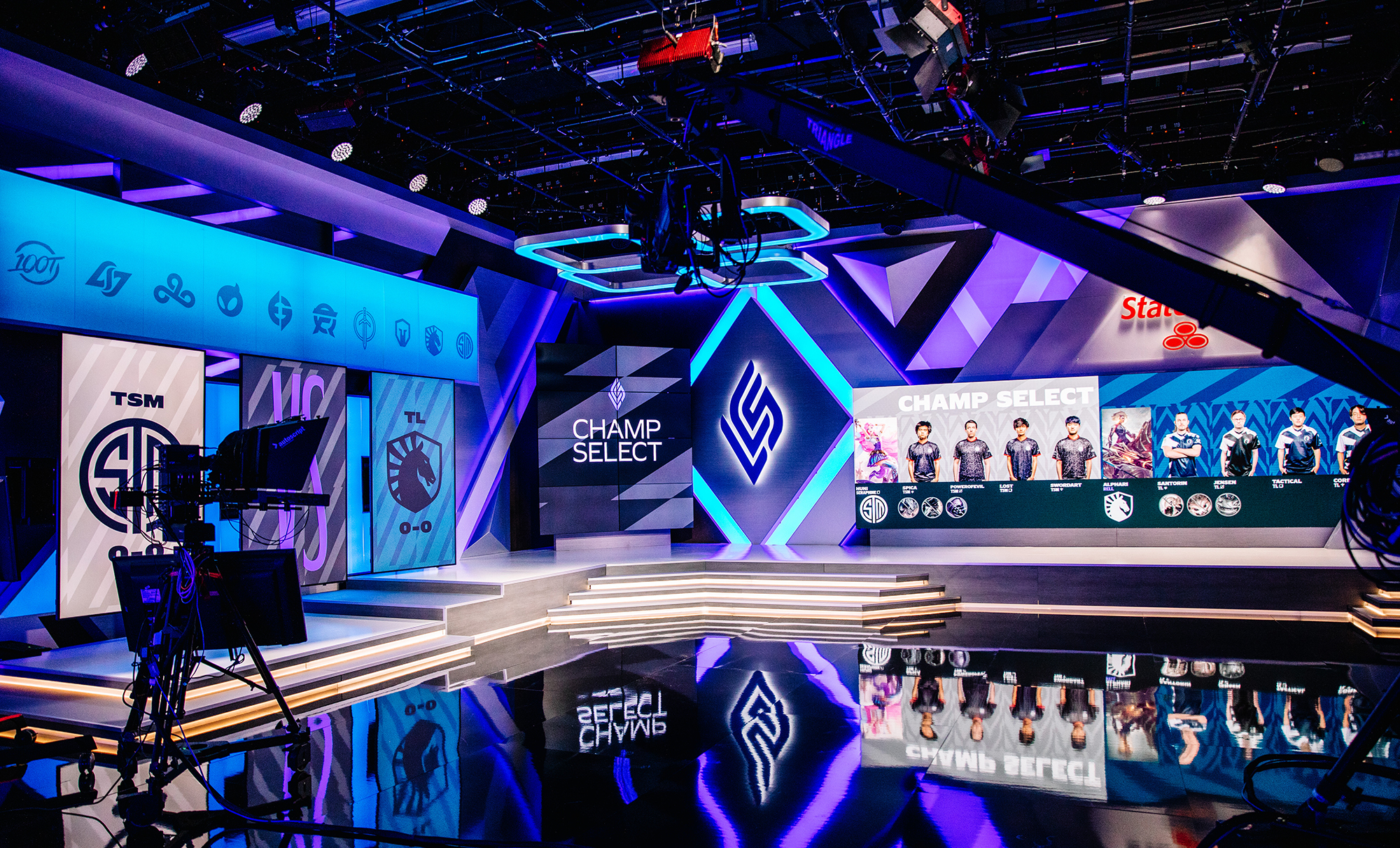 The new LCS studio features four discrete locations through which the host can seamlessly move during broadcasts.

The LCS production team worked with set/scenic-design firm Devlin Design Group and brand-experience company Troika on design of the new set, which is branded as the State Farm Analyst Desk.

To ensure the health and safety of the on-air talent and the crew, the bulk of the production team continues to work remotely from their homes, using Riot’s cloud-based virtualized workflow. Only LCS host James “Dash” Patterson and a jib operator are onsite in the studio, along with the technical director in the control room. In addition to the jib, the studio is currently using two robotic cameras to cover Dash during segments. For Mid-Season Showdown, he regularly hosts segments with LCS analysts and guests incorporated remotely via LED displays similar to ESPN’s Around the Horn.

Made up of eight seamless 55-in. LCD monitors, the Long Wall is the set’s centerpiece and provides an ideal backdrop for full-team takeovers, long-form storytelling, and segments featuring multiple analysts.

Three-Monitor Wall features three 98-in. LCD monitors that enable hosts to patch in remote guests. Each full screen can extend from the wall, tilt, move side to side, and rotate from portrait to landscape, providing opportunities for multiple camera shots and fresh content. 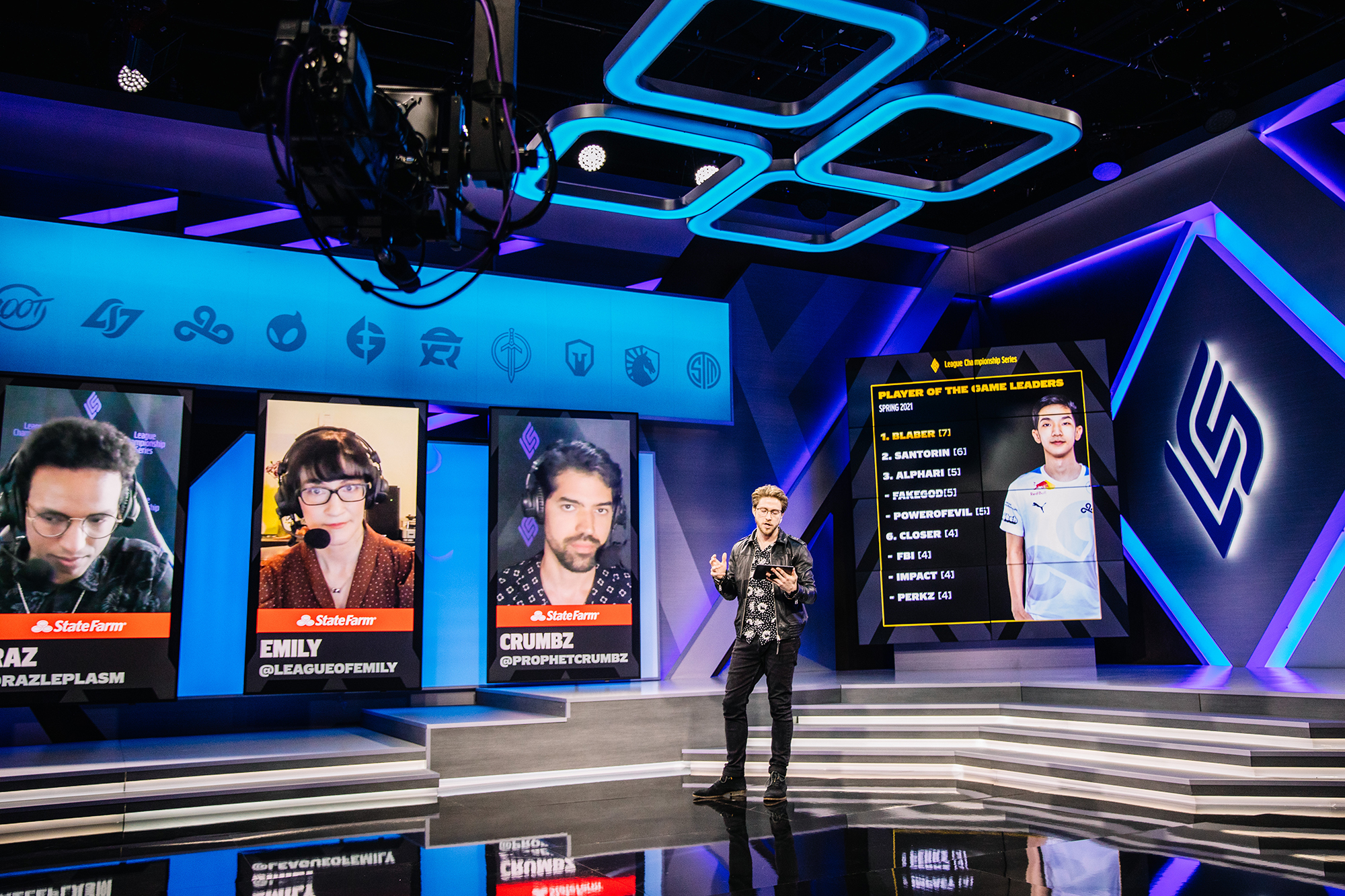 Dash regularly hosts segments with LCS analysts and guests incorporated remotely via LED displays similar to ESPN’s Around the Horn.

The modular L-Wall platform can be moved on and off the set, allowing segments and guest interviews to be hosted from a variety of locations throughout the studio.

The Corner Wall serves as a natural transition from the Long Wall, to the Three-Monitor Wall, and back to the Long Wall. It can also be used as a simple backdrop for quick segments or standups, as well as for branded sponsor segments. 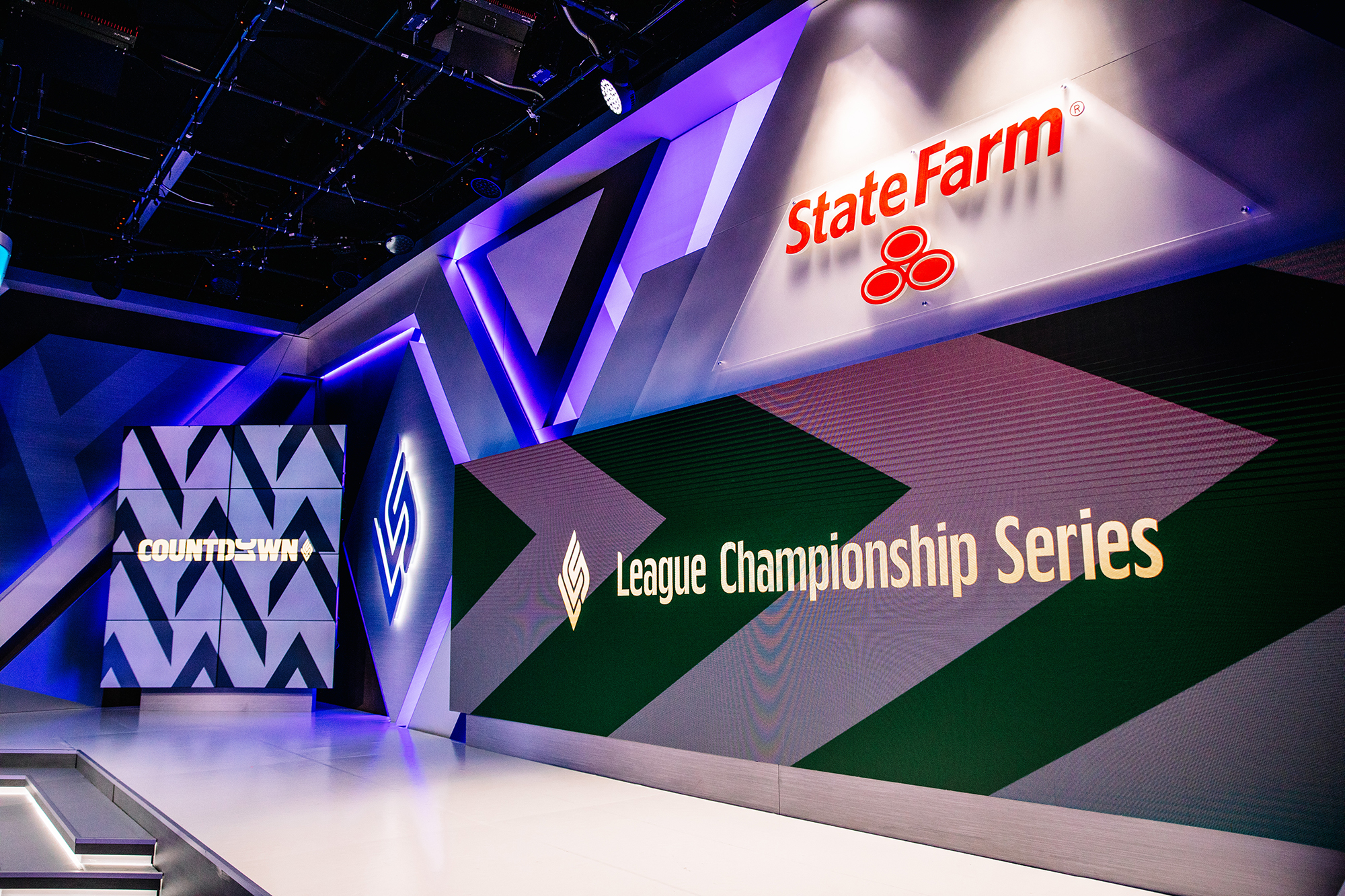 Both the Long Wall and the Corner Wall feature massive LED displays.

“Another really cool aspect of the set that we haven’t put on-air yet will be our standing bar desk,” says Restaino. “We don’t have a physical permanent desk in the studio, but we didn’t want to be without a desk-like option. So we built this standing bar desk that takes creative inspiration from the new LCS logo. That allows for that modular, free-roaming look while allowing the host to be able to set papers and notes down during segments.”

The new studio also features a mobile telestrator on a rolling platform to allow talent to shift from one location to another (in the previous LCS set, the telestrator was built into the wall and did not allow movement).

“We’re hoping to be able to get a lot more of these elements like the standing bar desk and [mobile] telestrator in the show once we’re able to get more production crew back into the studio,” says Restaino. “We’re also excited to be able to use this space post COVID for a variety of other ideas that we have for storytelling, to mix up the variety and create more different types of stories to keep things fresh.”

Launching a Studio During the Pandemic

Prior to the start of the pandemic, Riot had already planned to relaunch the studio at LCS Arena in conjunction with the LCS rebrand and new logo for the 2021 season. Originally set for the beginning of the season in January, the launch was delayed to the start of the LCS postseason last month. 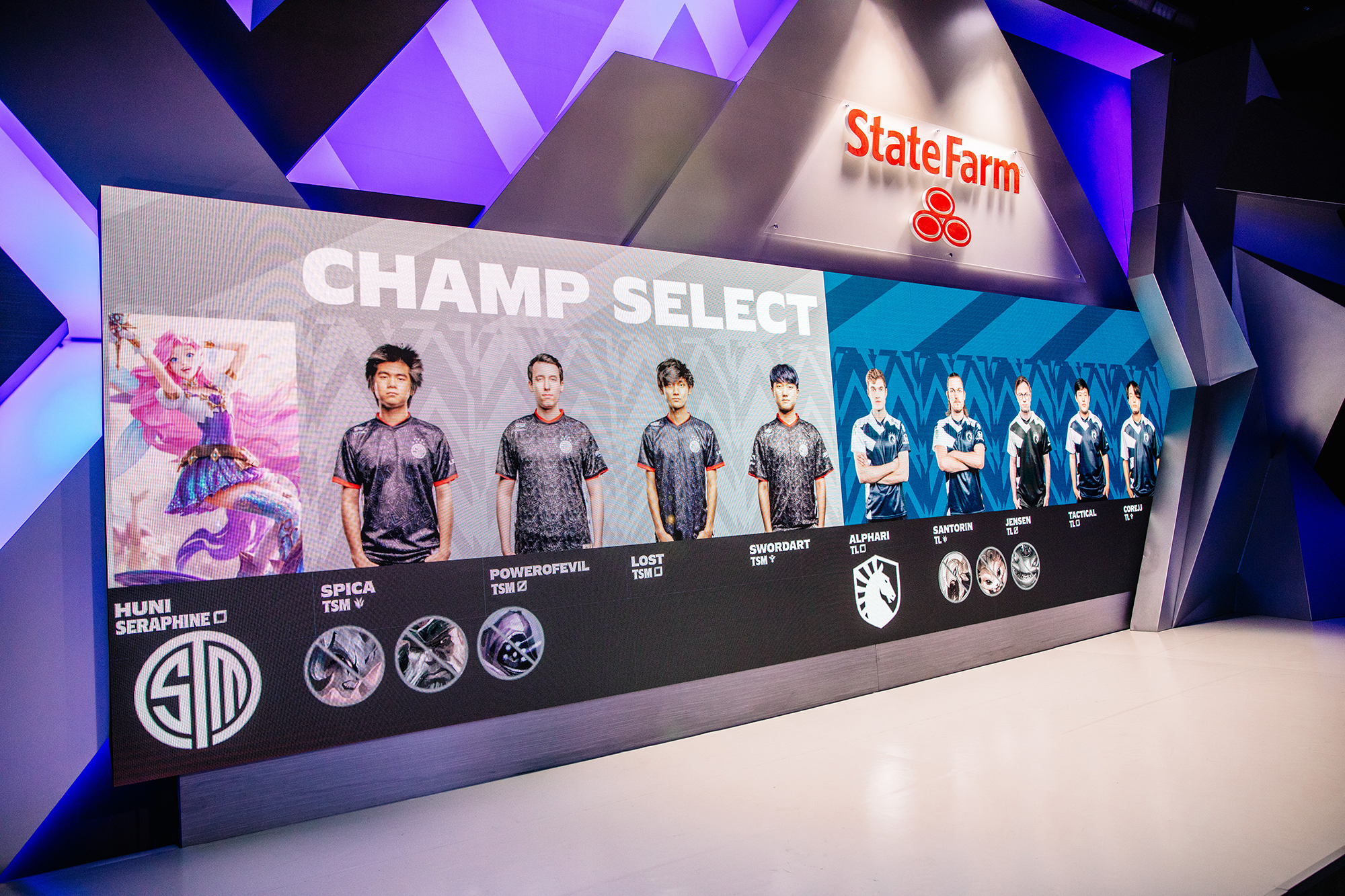 The Long Wall was deployed for the Champ Select segment during the Mid-Season Showdown.

“We knew that, coming into 2021, the LCS was going to get a fresh new look, new logo, new vibe, new graphics package, new everything,” says Restaino. “Our existing set was very much the ‘old LCS,’ so we were looking for a whole new look. We knew that we wanted the set to match that new tone of voice that came with the rebrand. We wanted it to feel fun and welcoming and warm while also feeling modern and forward-thinking.” 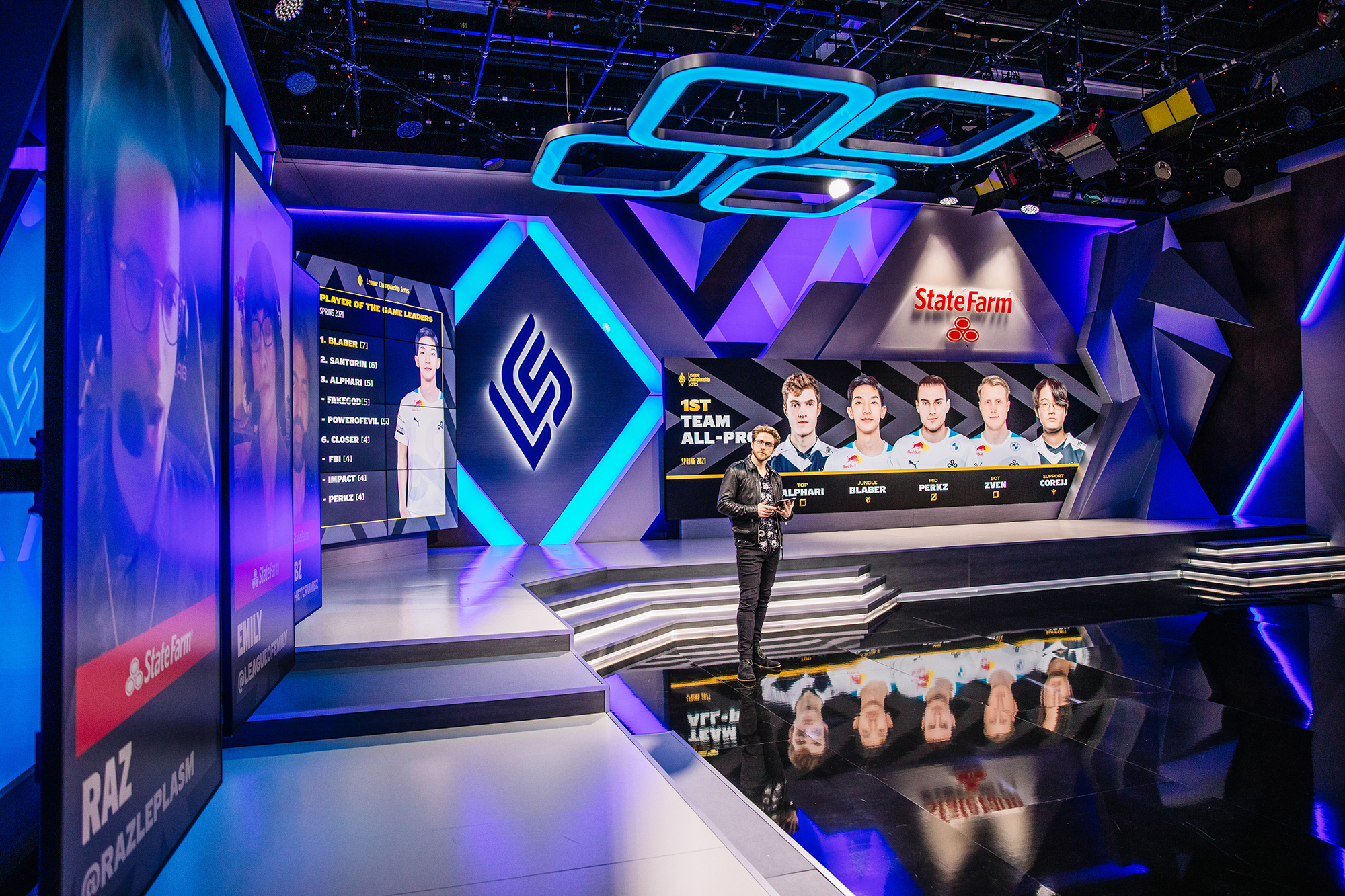 Dash surrounded by (from left) the Three-Monitor Wall, Corner Wall, and Long Wall

With that in mind, the new set exemplifies the new LCS logo and overall design themes. Restaino and company also emphasized the need for flexibility and modularity not only to accommodate both IRL and remote tournaments in the COVID era but also to create more diversity in the set design for the future.

“We wanted to make sure that the set doesn’t feel old in a year or two,” he says. “We want to make sure that we built something that is able to change looks again and again. We focused a lot on versatility and modularity because sets can become very stale very quickly if you don’t keep on trying to new things. The lighting and the physical set are designed so that we can transform it all as time goes on.”

Riot also plans to use the set for other properties besides LCS, making the need for a modular design even more important.

“We wanted the set to be modular not just for the LCS but also for other games that we do, like Valorant, TFT [Teamfight Tactics], [LoL] Wild Rift, or anything else in the future,” says Restaino, adding, “We’re not even reaching the surface of the different types of things that we can do with the set in terms of storytelling and different kinds of content.”

Looking Ahead: Mid-Season Showdown Finals and Beyond

Reviews on the new studio have been overwhelmingly positive, Restaino says, both internally and from the larger LoL community via social media and Twitch. 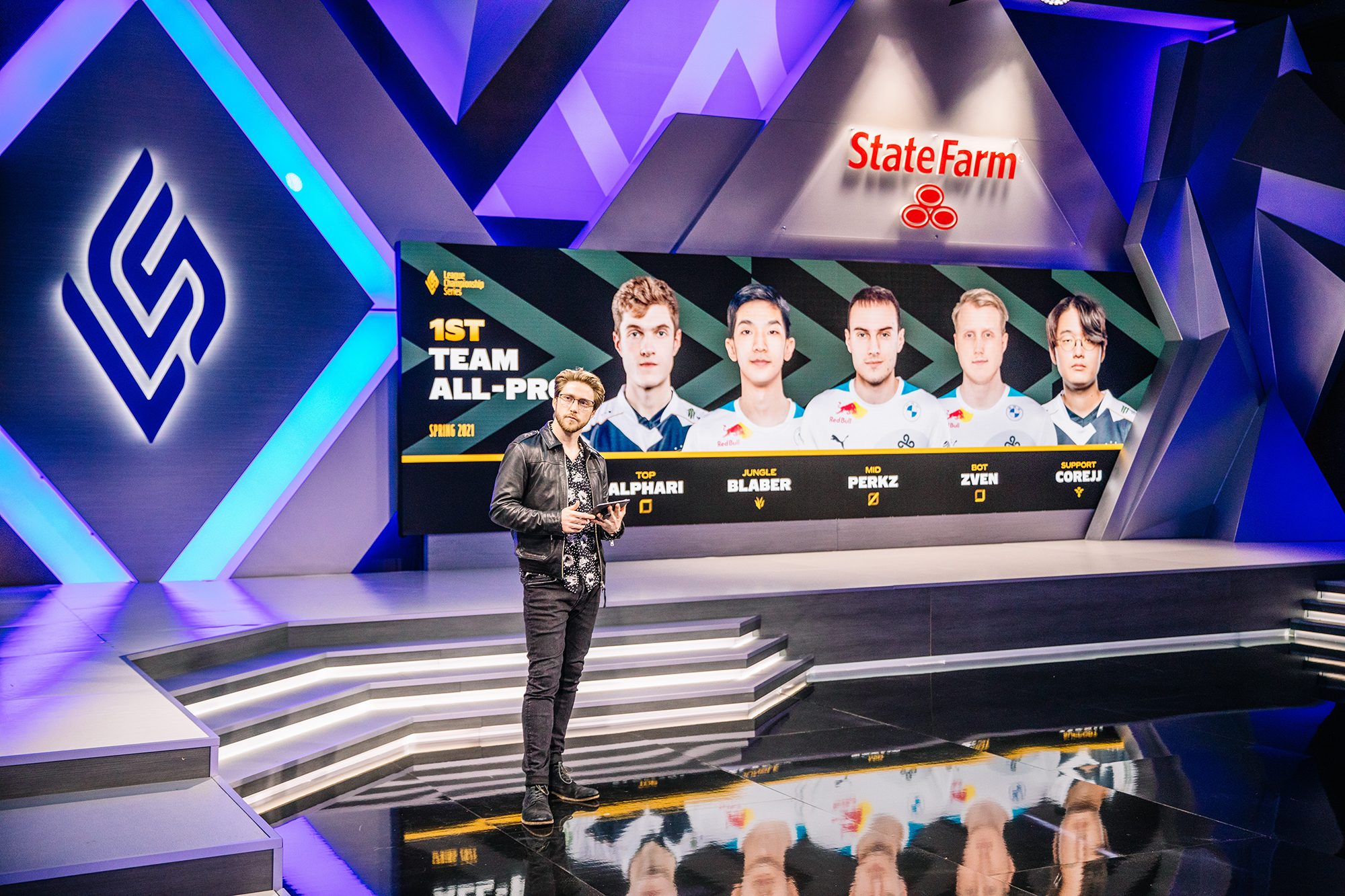 Although analysts will be onsite at the Greek Theatre for the Mid-Season Showdown Finals, casters will call the in-game action from the new studio.

The studio will take the next step this weekend when it plays a major role in coverage of the Mid-Season Showdown Finals, which will be held at the iconic Greek Theatre in Los Angeles (without an audience). Although LCS analysts will be onsite at the Greek Theatre, the LCS Arena studio will house the casters calling the action from the set.

“Internally,” says Restaino, “we’re all really excited to be back in a physical studio. It has been nice to be able to hear how excited the fans were when we were able to go back into the studio. We’re going to continue to push forward and take the next step, and we’ve got some really exciting things planned for the future, starting with [MSS Finals] this weekend.”