After an Overwatch League season unlike any before it, Activision Blizzard Esports’ Broadcast Technology Group is looking to build on the cloud-based workflows deployed in 2020 to serve online gameplay this year. An early pioneer of cloud workflows, ABE took it to the next level last year when Overwatch League shifted to online tournaments because of the pandemic and will continue to embrace the cloud even after LAN events resume. 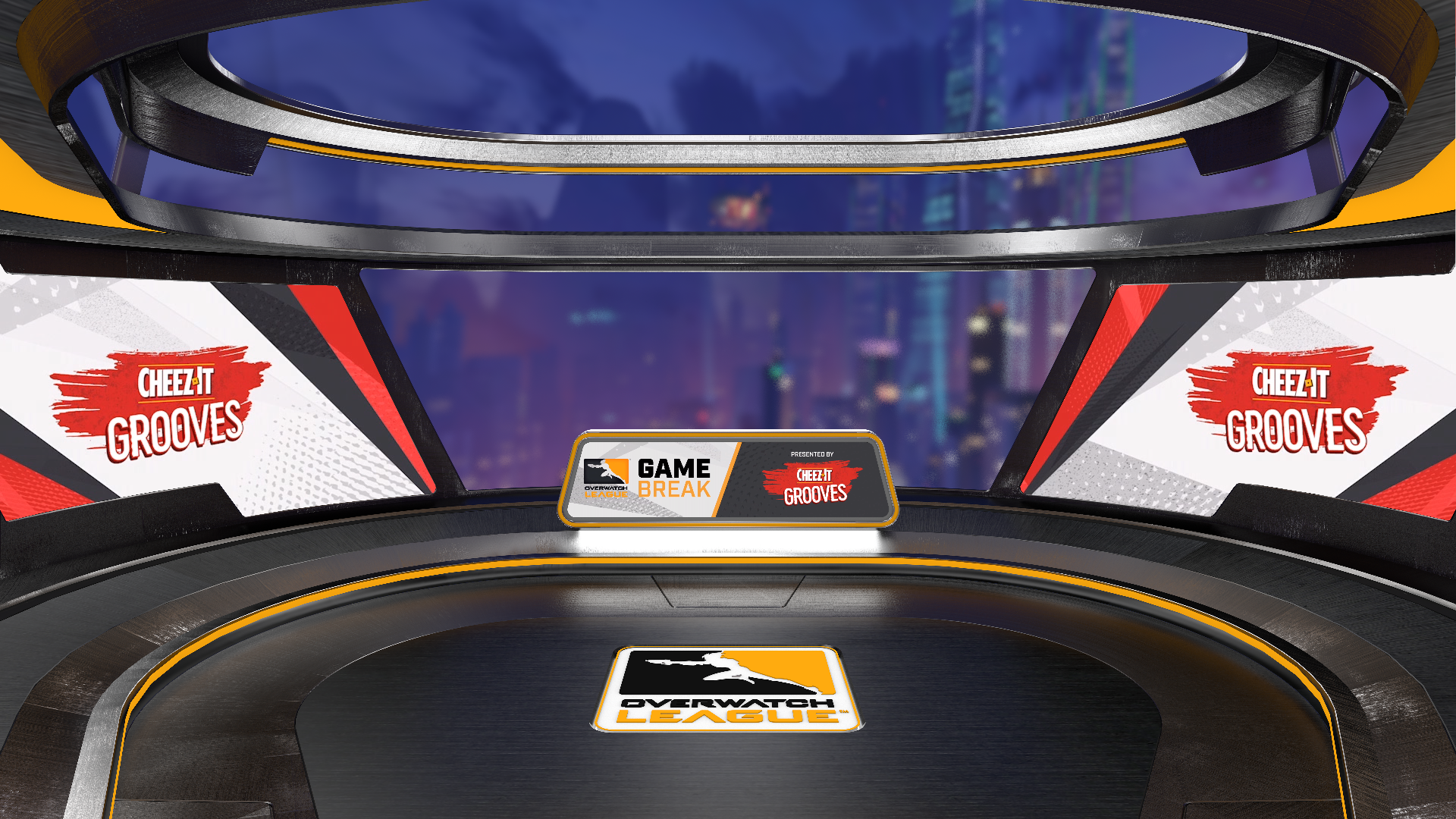 “One of the key points that we wanted to emphasize this year for our production crew was to build on what we accomplished last year and maintain the stability that we had at the end of last season,” says Corey Smith, director, live operations, Broadcast Technology Group, ABE. “At the same time, we’re also trying to think differently about how we would return to a home-and-away [in-person] model. What kind of systems do we need to have both on ground and in the cloud in a hybrid mode? We want to set ourselves up for success by experimenting with different things that will allow us to be more creative next year and in the future.”

Notable enhancements this year for Overwatch League coverage include a virtual set built in Unreal Engine, 4K-quality live streams on YouTube, “always-on” player POV cameras, Team Power Rankings with IBM Watson, and the upcoming Project Aloha, in which U.S./Europe teams will travel to Hawaii for selected Tokyo-based tournaments with teams from Asia. 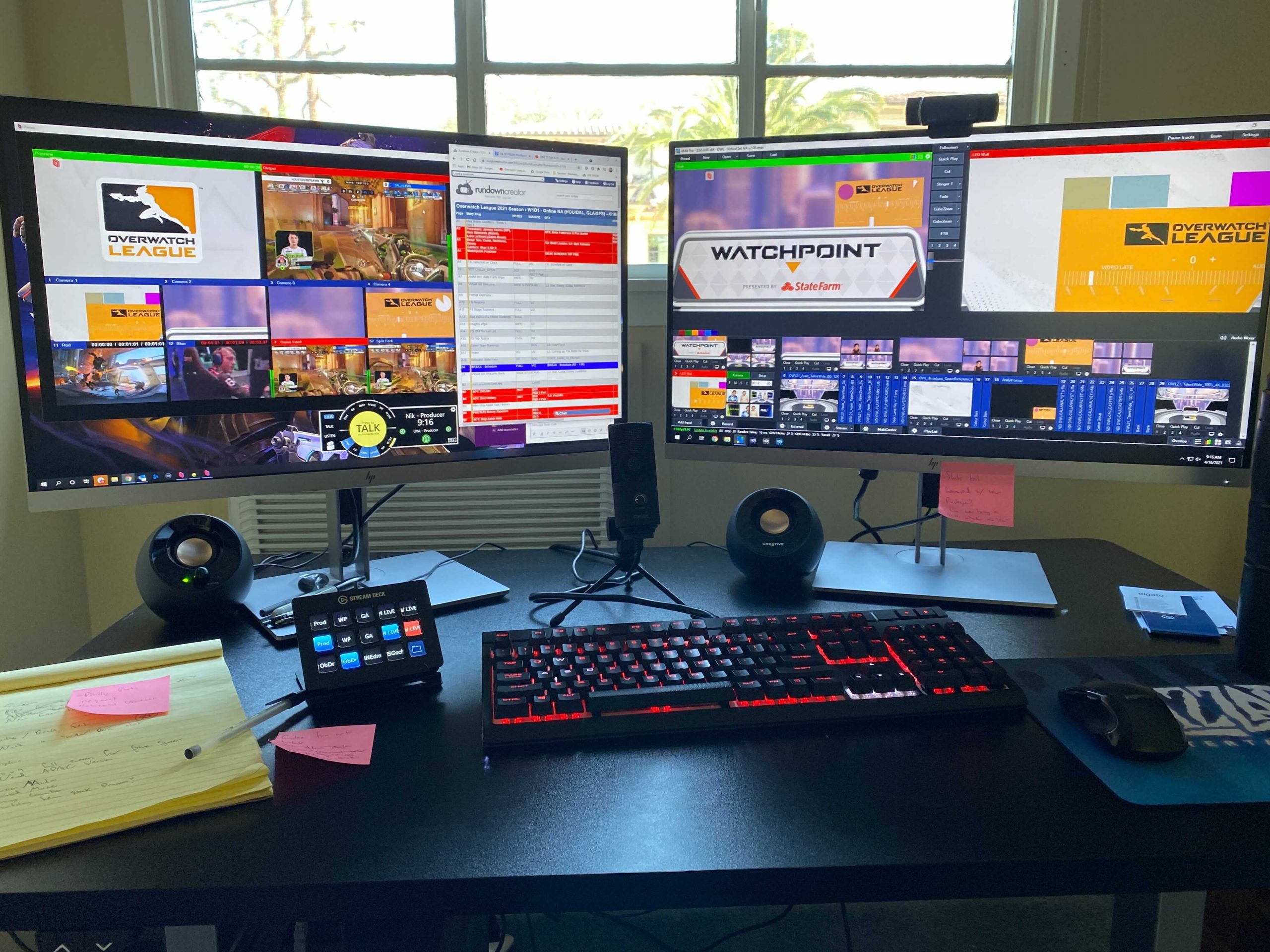 “We definitely have AMPP on our radar for the future,” says senior technical manager Ryan Cole,  “We think it’s a product that’s going to be very impactful to the success of broadcast production moving forward. We’ve been doing a lot of really great stuff on the backend with [Grass Valley] and are trying to understand what the future will look like. You’ll see some of those tests come to fruition later on in the year as we are actively developing workflows with Grass Valley that will continue pushing the envelope of cloud production.” 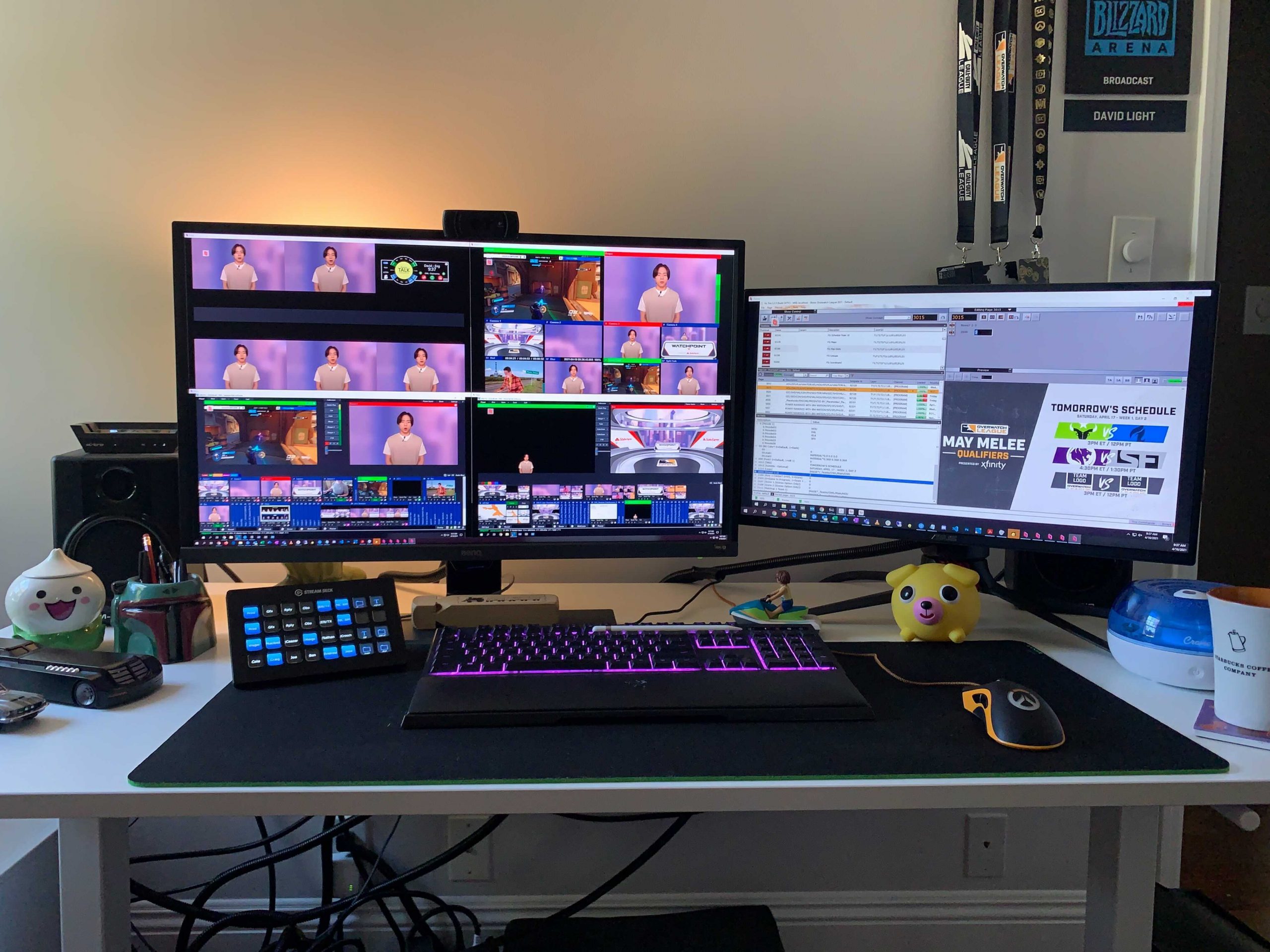 Despite being spread across the globe — from Korea to Europe to North America — ABE’s cloud-based ecosystem allows all on-air talent and crew members to interact in near real time. This year, all casters and analysts have received new remote-production kits consisting of a Sony α7 III mirrorless camera, LED lighting kit, full green-screen setup, and enhanced audio. In addition, observer (in-game camera operators) clients have been shifted to the cloud to enable strong bandwidth and a higher-quality output. 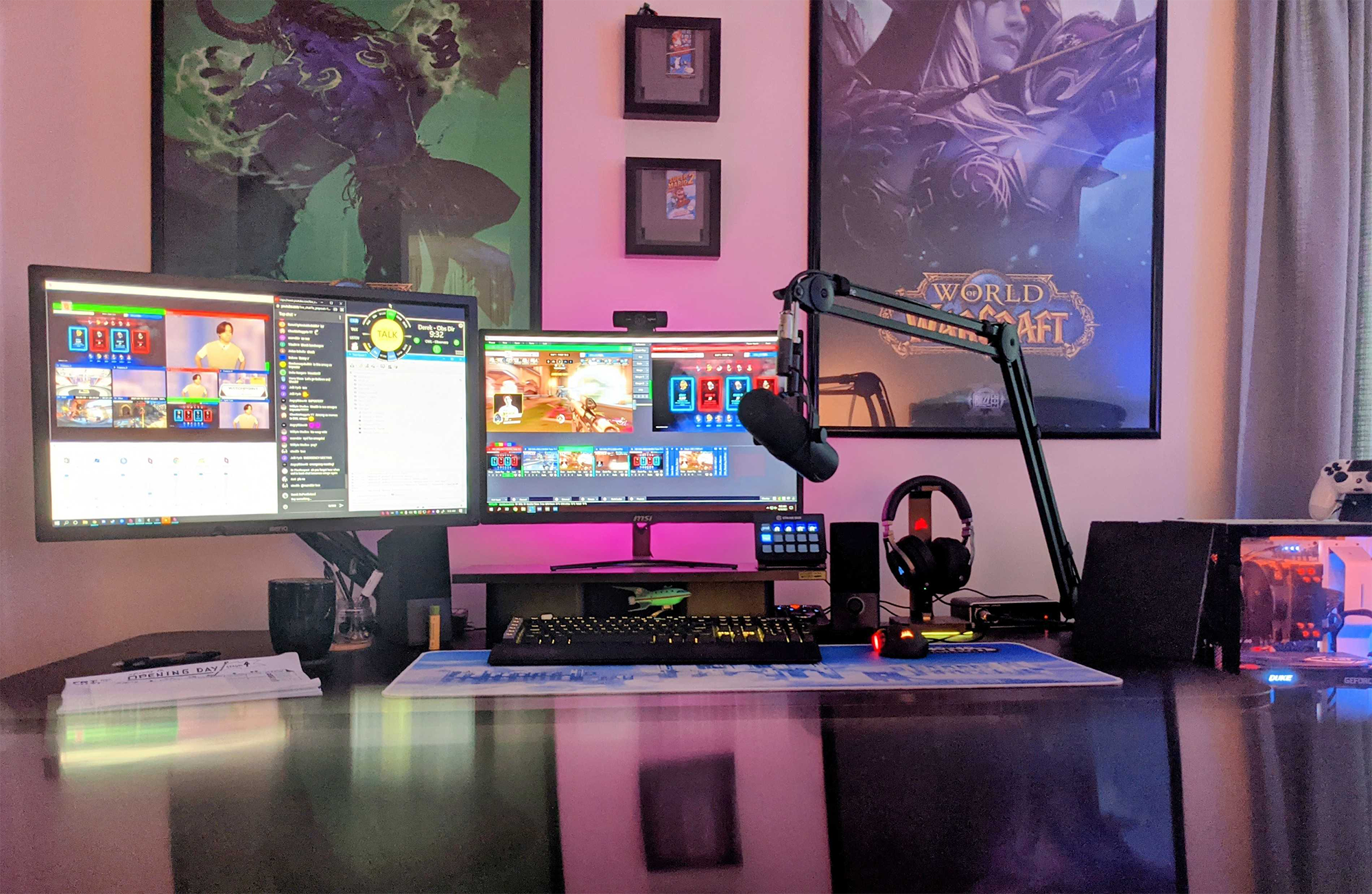 “That allows us to do true 1080p, 20-Mbps contribution for the observer feeds, as opposed to having to deal with home-internet problems,” says Smith. “We’re trying to smooth out a lot of the observer workflows by moving those machines to the cloud. It sets the table for the future when you start thinking about native 4K and HDR, and it gives us the ability to scale up.

Virtual Set and Viz Trio in the Cloud 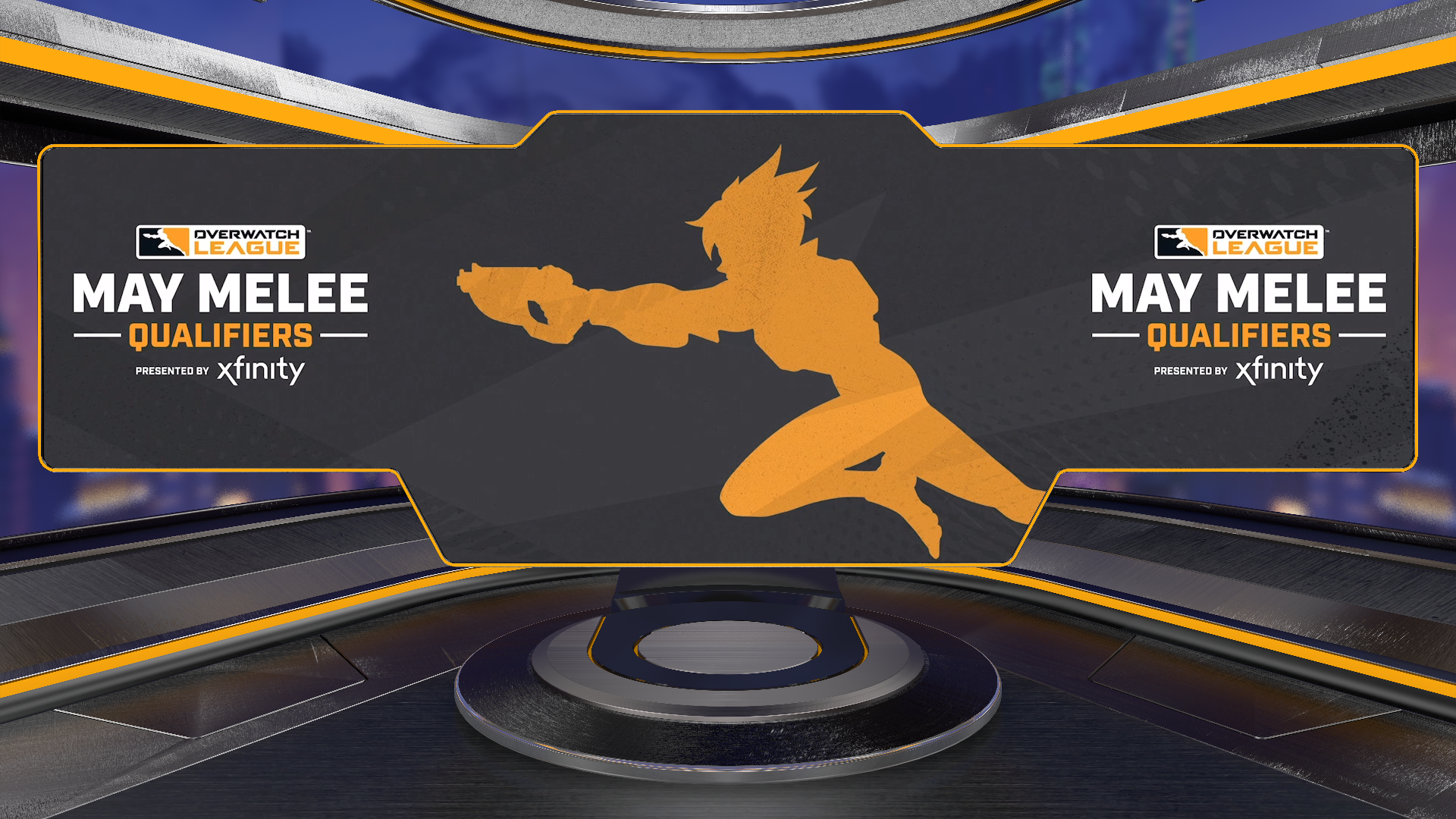 OWL is bringing back the virtual set that debuted at Grand Finals, which will be utilized all season long.

OWL is bringing back the virtual set that debuted at Grand Finals and now will be deployed all season long. In this 3D environment, the cloud-based Viz Trio workflow allows the production team to flex their creative muscles in any way they please.

“I don’t think Viz has ever been better in relation to the cloud environment,” says Cole. “I’ve seen actual workflows where we have [graphics systems] on on-prem, and we’ve seen stuttering because of the power of the PC itself. But now we’re running on [Nvidia] Tesla [GPUs] in the cloud. So it has been beneficial overall. It’s amazing how much you can push technology once you extract the underlying hardware layers. We’re 100% cloud [for graphics].” 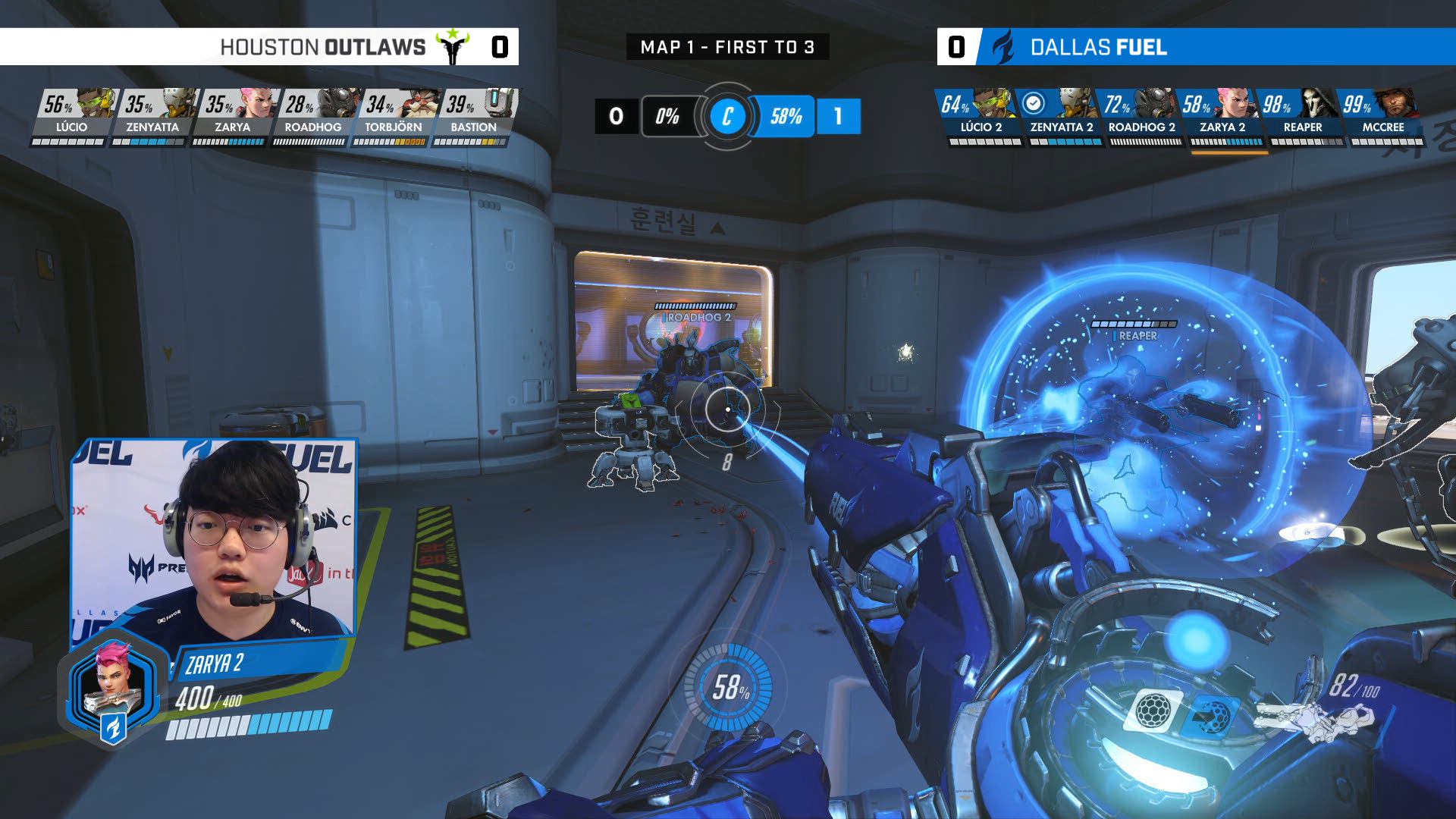 Also new this year, always-on player POV-camera setups will allow fans to see more live shots of all the players competing. When matches are observing an individual player in first-person, the broadcast will also show their player-camera feed live as well.

“When we do in-person events, we can elevate the player by routing their player-camera feed to the scenic so the audience can see and feel their emotion,” says David Light, broadcast engineer, solutions, ABE. “But, with the pandemic spreading players all around the world, acquiring 150+ low-latency player-camera feeds — with 150-ms delay to our cloud production environment — has been a mammoth undertaking.” 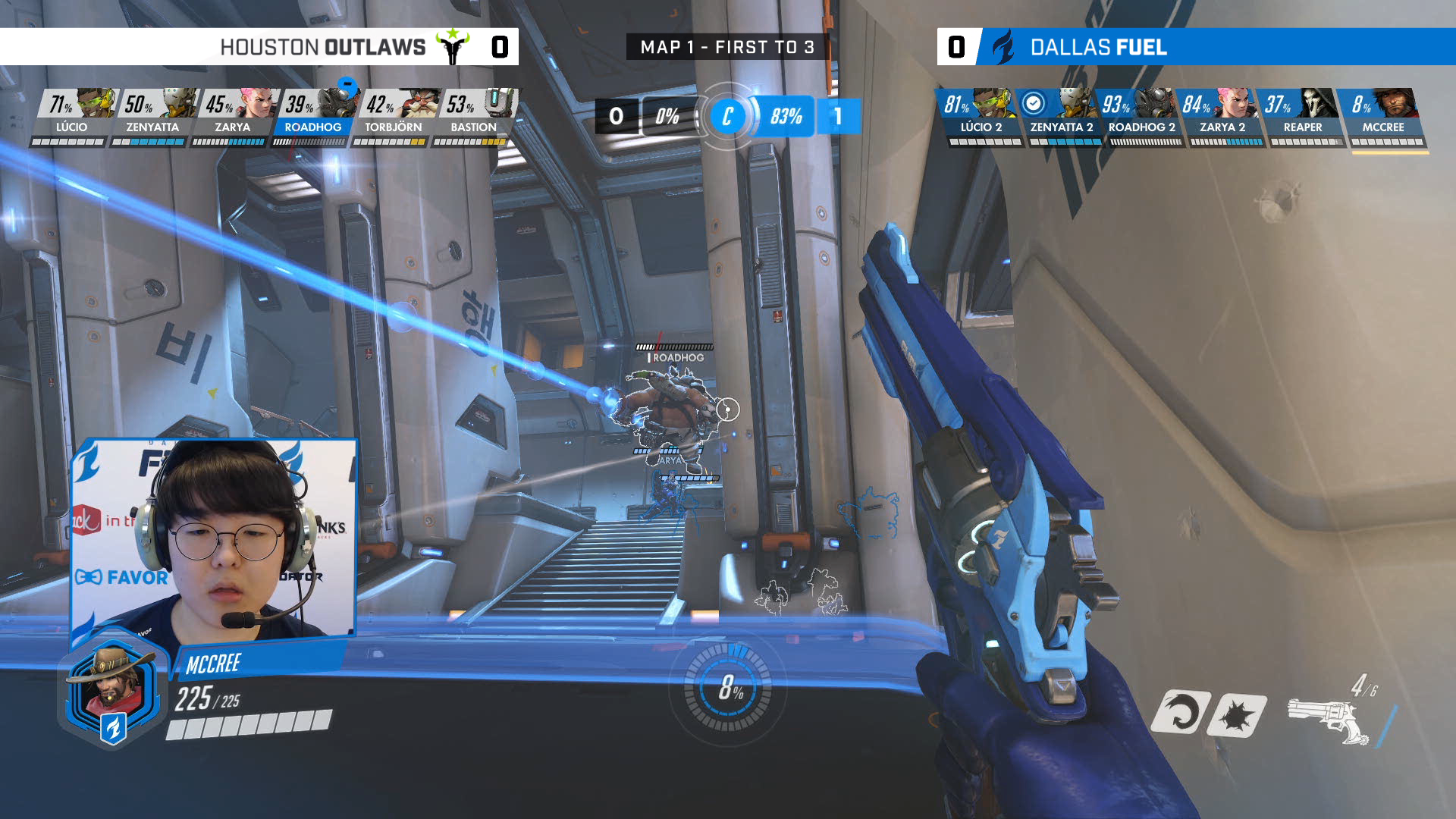 With the new always-on player POV cameras, the production team is able to pair the player-camera feeds with players’ in-game first-person feed and cut frames accurately among all 12 players off a single observer setup.

“In the past, to get a feature like this, we would have 12 observer setups slaved to 12 composites,” notes Light. “That just does not scale. With this new system, the audience will get to see and feel the emotion of the players in real time from home.”

Overwatch also plans to incorporate live player comms into the show at selected moments, allowing fans to get even closer to the action. 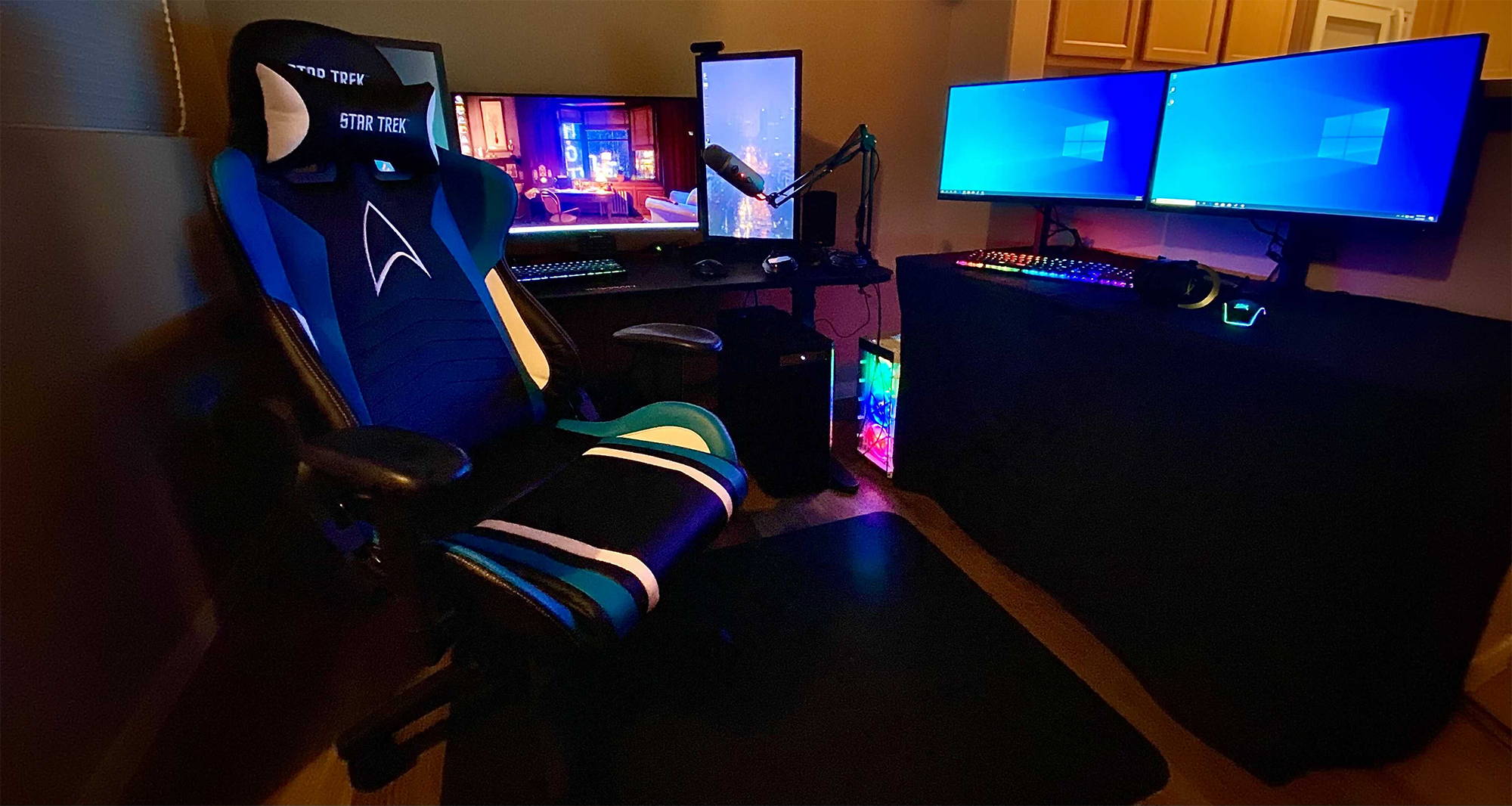 Observer (in-game camera operators) clients have been shifted to the cloud to allow for strong bandwidth to and a higher quality output.

After being forced to crown regional champions last year in Asia and U.S./Europe due to travel restrictions and transcontinental bandwidth challenges, Overwatch League has a new plan for the 2021 season. Dubbed Project Aloha internally, OWL will fly the top West Division teams to Hawaii and East Division teams to Tokyo for all four of its regular-season tournaments. Activision Blizzard has partnered with the University of Hawaii to access a high-capacity trans-Pacific subsea fiber cable system that runs from Japan to Hawaii, allowing players to compete on a faster internet connection with near-zero latency.

“The latency is pretty close to zero on both sides of the ball,” says Cole. “The players will have a really high-quality competitive ground to play at the highest level.” 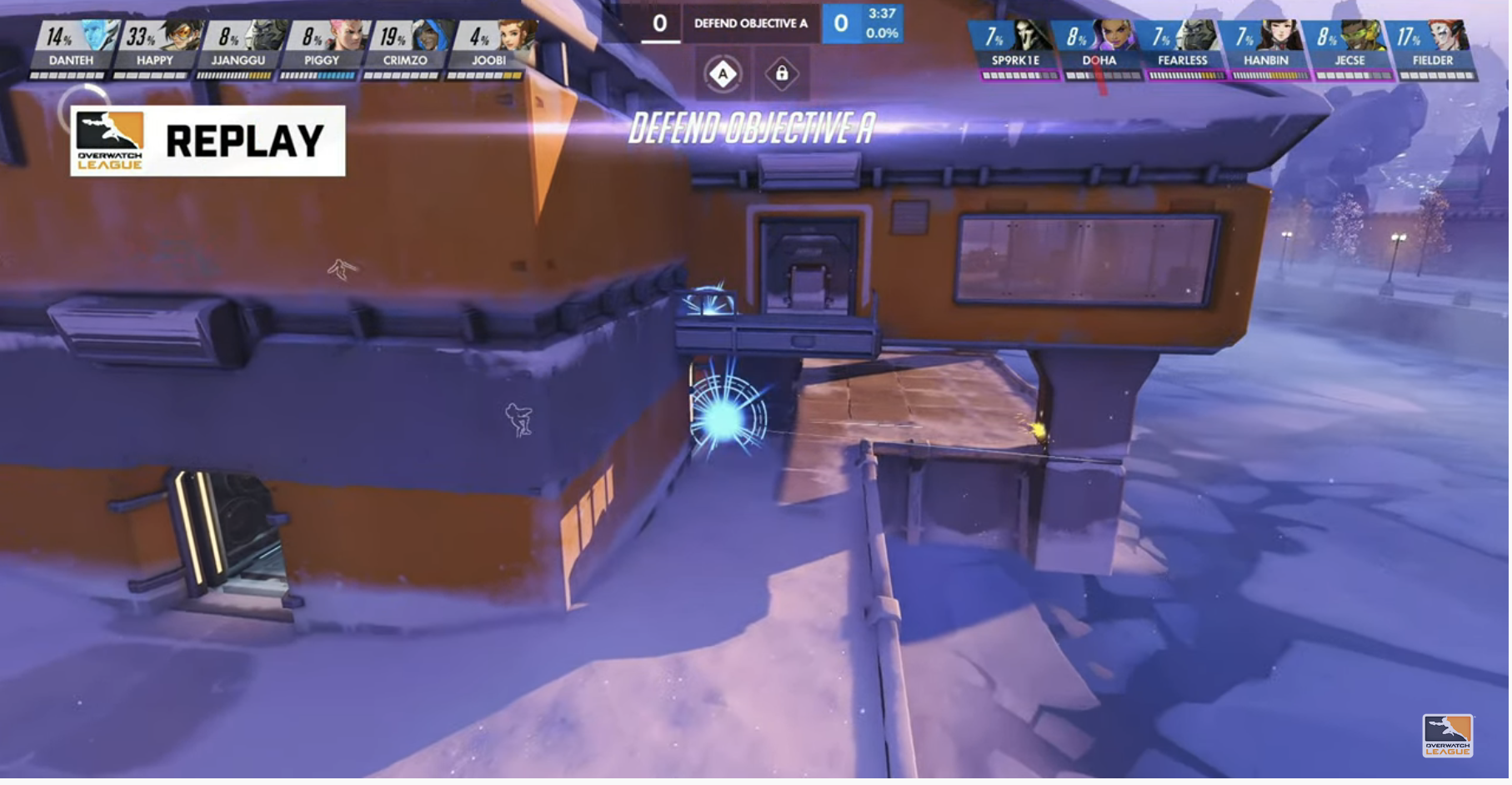 Overwatch League livestreams are available in 4K for the first time this year.

For the first time in the history of the Overwatch League, fans will be able to stream every match this season in 4K quality on the league’s YouTube channel, website, and mobile app on capable devices. Although ABE is looking to launch an end-to-end 4K production workflow in the future, this year’s YouTube live streams will be quad-encoded 1080p upscaled to 4K on the outbound feed via the cloud.

“We’ve been working with our technology providers and partners to try to do a native-4K experience all the way through,” says Smith, “but we aren’t quite there yet. That said, the visual representation and the quality that you see is still going to be night-and-day [compared with our HD streams]. You’re going to see so much more color and clarity, especially since there is so much action happening with Overwatch League. You’re going to see an unparalleled experience this year.”

Power Rankings With IBM Watson Go Inside the Game 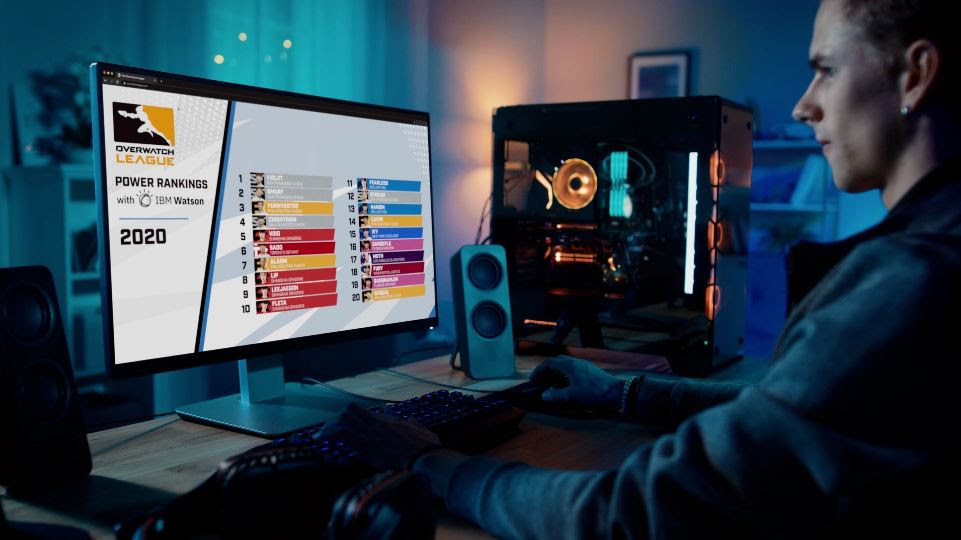 Power Rankings with IBM Watson uses AI algorithms to analyze every player and team’s performance in every Overwatch League match.

Activision Blizzard Esports is also launching Power Rankings with IBM Watson, which uses AI algorithms to analyze every player and team’s performance in every Overwatch League match. Developed by a team of data scientists at IBM and Overwatch League experts and trained on data from previous seasons, Watson’s algorithm correlates those statistics and assigns a weight to each, determining how each factor tips the balance toward a win or a loss. The combination of the data capture, correlations, and weighting creates the Power Rankings for each player and team.

“In near real time, we collect all of the data and telemetry of what the players are doing in the game and send all of that data to our stats platform, [which] then feeds it into the IBM Watson system,” says Smith. “The AI tools that IBM Watson cloud provides do the analysis on all that real-time data and create power rankings of players and teams. And we’ll be displaying all that stats data in the broadcast throughout this year, so that’s really exciting.”

Continuing To Push the Cloud Envelope 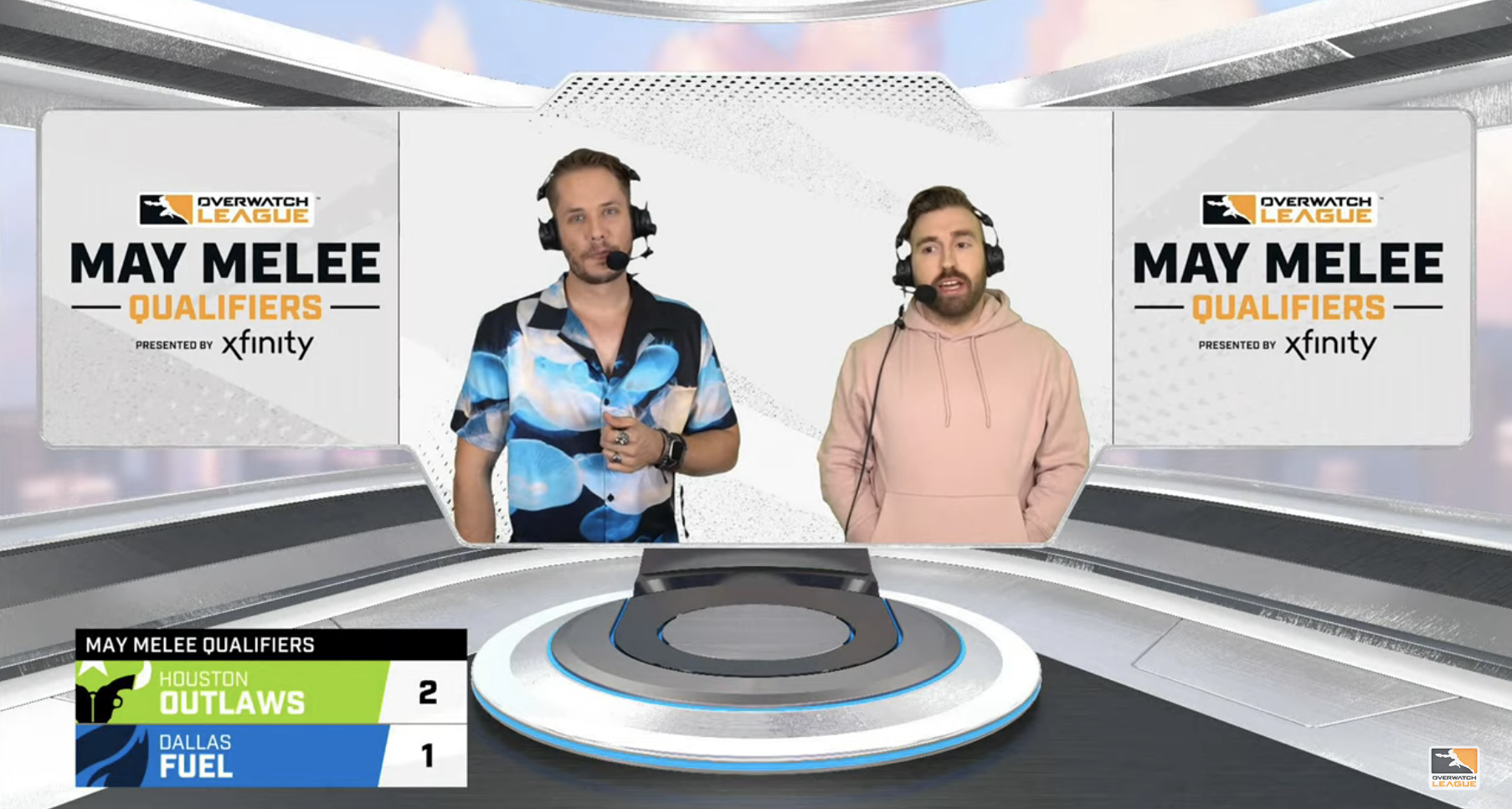 OWL analysts are integrated into the virtual studio remotely

As the OWL enters its fourth season today, the ABE Broadcast Technology Group’s pace of innovation and move toward the cloud is not likely to slow down.

“Being a pioneer in this cloud-first space has helped us figure out the transition to a true virtualized cloud production environment,” says Smith. “There aren’t many [organizations] that are able to push the envelope the way we do, so we’re leading our partners and vendors along in a lot of cases. It’s exciting to be effectively changing the face of broadcast production without having to have a big flashy budget. The versatility we have with the cloud gives us the full breadth of creative control over our show, rather than having to compromise because we’re limited by a physical space.”