Fans have recently returned to Honda Center on April 16

After a full year of stoppages, Southern California is bouncing back from the COVID-19 pandemic. For example, Disneyland will open its doors on April 30, the Los Angeles Dodgers are off to a hot start at 14-5, and the Anaheim Ducks have recently welcomed back fans on April 16. For the third of that trio, the franchise’s production staff has combined their efforts on multiple fronts, including a nostalgic approach to their in-venue and social content as well as a second-screen show dubbed The Flying V Experience.

“One of the things that we’ve added was a second screen experience through our social media channels, so we’re able to engage with our fans,” says Rich Cooley, director, production and entertainment, Anaheim Ducks. “Even though we have [in-venue] fans, The Flying V will continue for the remaining three games.” 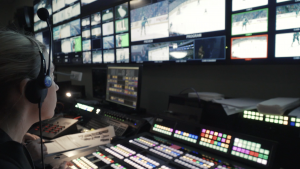 Inside the control room at Honda Center.

The local fanbase of the Ducks have a lot of love for the team, but this season, the organization has had to carry on without them for most of the 2021 regular season schedule. With tons of space to work with inside of the Honda Center, the crew has gotten creative with the concourse and upper levels of the arena. For the team’s regional sports network, Bally Sports SoCal, the linear pregame show is being hosted inside of the venue.

“We’ve become an extension of the broadcast, so we’re catering to what they need for interviews and making sure that their show is up and running,” says Cooley. “We usually have our pregame show outside where the fans can attend, but we decided to move it inside to the concourse.”

Before the return of live fans, the videoboard show has entertained a small number of spectators in the building. Rather than leaving the LED displays with static imaging and ordinary prompts, the staff is having a lot of fun with a wide range of material. Some is contemporary while a majority is a throwback to 40 years ago.

“We’ve basically been entertaining ourselves,” he adds. “Davin Maske, our entertainment manager, has been running a loop of old clips from 80s video games like Pac-Man and Asteroids.”

A Place to Hang Out: The Flying V Experience Takes Over Second Screens at Home 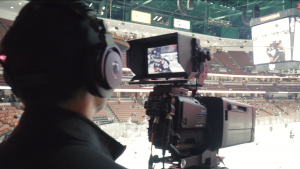 A shot of a camera at a Ducks game.

Along with their in-venue duties, the Ducks have been busy churning out another virtual endeavor for the previous 46 games. The Flying V Experience powered by COX, a second-screen experience that is being produced for all home and away contests, was the only connection that fans had to the team at Honda Center and is continuing to entertain those that can’t make it through the turnstiles.

Accessible through a mobile device or laptop, supporters can chat with each other in real time, have the chance to meet notable alumni, earn points to win prizes, and listen to live DJ sets. Fans can join the platform 20 minutes before puck drop, and like most second-screens, this will continue to be a companion tool to the linear broadcast.

“DJ JoJo has been terrific with running this thing all year long,” says Cooley. “He’s located in an area where we have a little flexibility to have some fun. It’s been one of those elements that has been different than we’ve ever done before.”

During the franchise’s early years, the then-Mighty Ducks were entrenched in the decade’s fashion and aesthetic. More than 25 years later, the organization is hopping in their time machine and tapping into the vibes of the 1990s with their Reverse Retro jerseys. During games where they’re donning this sweater, including its debut during Breakout Night against the Colorado Avalanche on March 16, digital content is being built for their social media channels. These posts include videos of legends like Paul Kariya and Teemu Selänne in the uniform and fan-submitted pictures of when they were younger.

“We’ve been pulling out some old highlights of players who have worn the jersey,” says Cooley. “For example, Guy Hebert, who was our longtime goalie in the 90s, is on the broadcast as an analyst, so he’s been pulling out some of his old helmets. We’re trying to find anything that people can relate to from our archive.”

Prior to the team’s entering into the National Hockey League, the famous Might Ducks trilogy captured the hearts of sports fans around the country. In 2021, like the jerseys, the Mighty Ducks franchise has been brought back as a series on Disney+. With an abundance of nostalgia and buzz around the club, the Ducks are also tying some of their content back to the film. For instance, before the team’s game on March 24 vs. the Minnesota Wild, every player wore a Mighty Ducks jersey that appeared in the movie to the arena:

“We love connecting with the old brand as much as we can,” he adds. “We had almost the entire cast of the Mighty Ducks here for a movie screening and Q&A for our 25th anniversary [in 2018]. This year has been challenging with doing this content virtually, but if there’s fuel on that fire as we move forward, we’ll continue to do some of those creative things.” 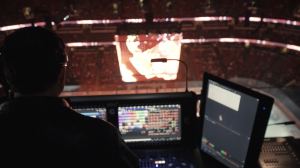 In-venue lights are controlled from a high perch.

The Honda Center was finally populated on Friday, April 16 vs. the Vegas Golden Knights. Now that fans have been back for the last two home games, the 80s video games are going back on the shelf and they’re dusting off their regular production plan that hasn’t been used in quite some time. The Flying V was an ample location to highlight their corporate sponsors while they were playing behind closed doors, but they’ve shifted that content back to the big screen for patrons to see in person.

“We’re going back to the playbook with some of our sponsored elements that we haven’t had a chance to do this year,” says Cooley. “We also have certain Fan Cams, in-game trivia, and other elements. We were able to bring back our in-arena host and organ player, who both add a lot to the show.”

Other organizations have dipped their toes into the waters of second-screen experiences. For most teams, when fans made it back to their seats, second-screen experiences became less prevalent since all their resources were pushed towards the in-venue show. In Anaheim, they will mix both the virtual platform and the in-arena crowd to create an overarching community that brings both audiences together.

“Our fans haven’t seen our in-arena host for over a year,” he continues. “We’re dedicating a segment or two towards it, but I think it’s fun for the fans that can’t make it into the arena.

The One’s Who Get It Done: Shoutout to Ducks’ Production Team

On any given night, Cooley is backed by a stellar crew that have fulfilled the needs of multiple roles, including Maske; Producers Peter Uvalle and Gabe Suarez; Associate Producer Martin Victorio; Graphics/Video Producer John Lopez; and Assistant Manager, Entertainment & Production Sarah Montecinos. Despite its small size, the entire crew is banding together to deliver high-quality content to fans at home and present a fun atmosphere after an adversity-filled year.

Our full-time staff isn’t very big, but everybody works extremely hard to not only support the Ducks, but all of our events at Honda Center,” concludes Cooley. “All of the local teams in Southern California share staff, but they’re all great professionals and we wouldn’t be able to do a show without them.”

The Anaheim Ducks will host the Vegas Golden Knights at Honda Center on Saturday, April 24 at 9 p.m. ET.