The franchise is still playing games without fans

Founded in 1909, the Montreal Canadiens are the oldest team in the National Hockey League and one of the oldest continuously existing franchises in all of sports. Part of the Original Six, the club has experienced Stanley Cup victories and crucial defeats, but this year has brought something that it has never seen before: an empty arena. Given this uncommon situation, the production team is working closely with the club’s television partners to improve the at-home viewing experience.

“I don’t think we’ll have fans to the end of the season and even into the playoffs,” says Paul Gallant, director, game production, Montreal Canadiens. “We’ve decided to put a lot of our focus on the LEDs and lighting to bring the scoreboard to life for the fans [watching] at home.” 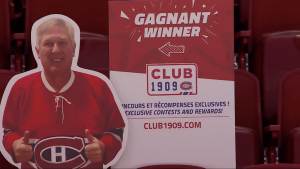 Members of Club 1909 are being highlighted during the game.

Due to the rise of COVID-19 cases in Canada, the province of Quebec is proceeding with an abundance of caution and prohibiting fans from attending games inside Bell Centre. Given the venue’s capacity of 21,302, the players and coaching staff account for only a fraction of the noise made in a completely empty arena. In both a figurative and a literal sense, the Canadiens are turning the building into a “soundstage” for their television partners, TSN and Sportsnet, with visual elements and fabricated crowd sound.

“One thing that the NHL made very clear was to help the broadcast,” says Gallant. “We’ve added more cameras and are constantly working with them to get images that they don’t normally get. When the telecast cuts away to a commercial, our broadcasters are doing in-game interviews; when the game comes back, they’ll output it to the broadcast.”

For Gallant, the most difficult part about this season is having to adapt to a constantly changing production. This season, with a smaller staff than usual, the crew worked hard to develop the opening video sequence in-house. Since a lot of production meetings are either virtual or in a different setting than what staffers are used to, the crew has become flexible on deadlines.

“With everyone working at home, we’ve had to change how to deliver content,” Gallant explains. “The 5:00 p.m. deadline doesn’t necessarily work on a game day anymore.”

For the second part of the “soundstage” effort, Gallant and company have experimented with fake crowd sound all season. It’s quite odd for an iconic building to be dead silent, but the crew’s job is to match the edifice’s legacy with a high-quality product that fans expect when they turn on the television.

“Bell Centre is still a vibrant place, and we now have the crowd noise down,” he says. “The players sometime want it louder, and, at the end of the day, we have to get them to win games.” 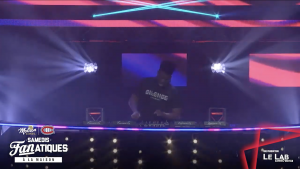 Each Saturday, fans are able to watch live DJ sets on Twitch.

Even with the empty house, the videoboard is churning out myriad. interesting prompts and videos. With a handful of activations on the videoboard, the content showcases the passion of the fans watching at home. Each night, for example, the franchise selects a drawing submitted to its “Send Some Love” contest, places it in the stands, and projects it on the LED display during a stoppage in play. Similarly, a lucky member of Club 1909, the official fan club of the Montreal Canadiens, is chosen to sit rink side — although as a cardboard cutout.

Among the few non-credentialed individuals allowed in the venue are military personnel and their families hosted by the Canadiens for each home game. Watching from the IGA Hero Suite, the guests are introduced, honored, and shown on the centerhung videoboard.

A massive effort during the offseason produced a special player-intro video for opening night against the Calgary Flames on Jan. 28. Each player was introduced through a video from a fan, a local medical professional or first responder on the frontlines of the pandemic:

Another example is some of digital entertainment elements produced at Bell Centre. Each Saturday, the club hosts Molson Export FANatic Saturdays, allowing fans to immerse themselves in an action-packed day of events before puck drop. The schedule includes a special item of the game, a trivia happy hour on Twitter, a live 30-minute set from a rotation of local DJs on Twitch, and a mystery special guest.

The Ones Who Get It Done: Shoutout to Canadiens’ Production Team 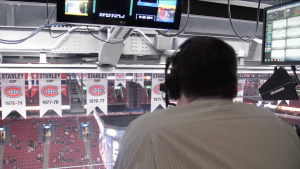 Gallant, a multi-decade veteran of in-venue production, relishes his time with the crew allowed at Bell Centre every game. Despite the obstacles, they – feel fortunate to be in a select group of people allowed inside, but they’re more than ready for fans to return when it’s safe for them to do so.

“It was pretty cool at the beginning to be alone in the building because you’re one of a hundred people,” Gallant says. “Now we’re more than 20 home games in, and we want the fans back.”

During the 2021 season, there have been many opportunities for growth. The crew — including VP, Marketing Jon Trzcienski; Senior Director, Content Strategy, Shauna Denis; Manager, Game Entertainment, Cynthia Paquin-Lepage; and Manager, Events and Promotions, Vanessa Harrison — looks forward to using the recently learned techniques and workflows when fans once again come through the turnstiles.

“When the season is over, everyone’s going to take a collective sigh of relief and say, ‘Wow, we were part of something really unique,’” concludes Gallant. “What we’ll take away [from this year] is that we came together and we’re now a stronger company because of it.”

The Montreal Canadiens will wrap up the first of five final home games at Bell Centre with the Winnipeg Jets tonight at 7 p.m. ET.