NEP Group’s U.S. Broadcast Services team latest mobile unit, NEP Supershooter 5, is on the road after making its debut at The Masters last month. The 1080p-ready and 4K-capable unit is the first of the company’s fully IP mobile units to be powered by its new proprietary and easy-to-use broadcast control and monitoring system to streamline, simplify and speed up the configuration and connection of on-site and remote facilities. 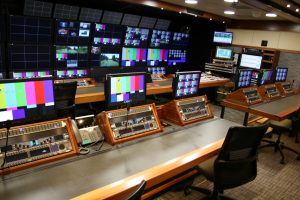 Supershooter 5 has plenty of room in the main production area.

With the use of their new broadcast control system, Supershooter 5 marks a movement towards the future of mobile units and remote production for NEP, bringing current and future technologies and systems together.

“Though the footprint and technology in this unit are nearly identical to others in our fleet, our new broadcast control system really makes Supershooter 5 a next-generation truck,” says Glen Levine, President of NEP’s U.S. Broadcast Services group. “The adoption and explosion of IP technologies and the shift towards centralized production workflows has been revolutionary for the industry. With our broadcast control system, we can really harness the power of this technology while reducing complexity and speeding up the configuration process. It is really transformative and will help us bridge the gap between existing and future technologies.” 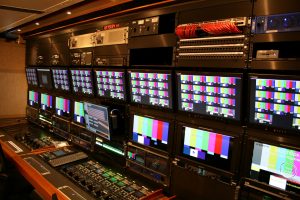 The video control area in Supershooter 5.

Andrew Jordan, NEP’s Global CTO, adds: “This broadcast control system also starts moving us to a place where our mobile units, flypacks, studios and centralized production facilities will all be on the same platform – making us much more flexible, adaptable, and agile for our clients. It was developed entirely in-house by a fantastic team of software and broadcast engineers and is going to be a key component of our future technology development.”