As anyone who has produced a weekly broadcast will tell you, live productions can be hard work. At Christ Community Chapel (CCC), worship leaders host an online church service for their remote congregation that at once encourages, comforts, and displays world-class production value. These online worship services include live sermons, pre-recorded music performances, multi-channel switching from 8 high-quality SDI sources, and many more complex video streaming workflow elements. 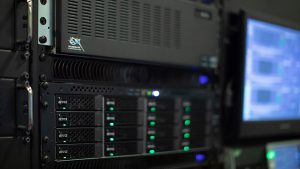 With a heavy workload like theirs, CCC’s production team was struggling to keep everything organized. In their workflow, each camera recorded to either internal memory cards or an external recording deck, while audio was recorded separately by the service’s live audio mixers. After the worship service concluded, audio and video files were exchanged between the two teams using Microsoft OneDrive cloud storage and external SSDs.

With their disconnected church tech, one team always waited on the other to complete their work before they started the next stage of production. Michael Seng, video director at CCC, put it best: “It was very convoluted.”

From religious institutions with massive audiences to small churches with a devout and dedicated congregation, EVO is the high-performance shared storage solution for houses of worship and creative production studios around the world. With EVO, Seng’s video editing team collaborates on projects without the risk of overwriting project files or cluttering their file structure with dozens of duplicate versions.

CCC uses two IngeSTore Servers along with EVO for multicam acquisition and live edit. Using IngeSTore, 8 SDI feeds are captured live and encoded as either Sony XDCAM or ProRes files, depending on the requirements of each project. As they are encoding, IngeSTore transfers these files directly to EVO over a 10GbE network connection. Seng’s team then begins piecing together over 20 camera angles in a single Premiere Pro timeline, along with graphics and other media overlays on their EVO. Each camera feed is saved for post-production, so the entire process is fast, simple, and stress-free.

CCC’s production team saves time importing media, syncing audio, and managing files with their new IngeSTore-to-EVO “edit while record” workflow. What was once a laborious multi-step process has been completely streamlined, giving Seng’s team members access to their footage while it is still recording.

“We have multiple editors pulling in footage while the live stream is going on,” says Seng. These growing files—audio and video files that are still being filmed—are quickly accessible on EVO shared storage, letting editors collaborate on productions before the online services are over. “Live-editing saves my video team a couple hours every week. That may not sound like a lot, but in our world, that can be huge.” 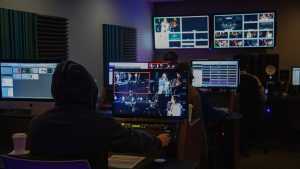 Value for Volunteer Video Teams
From their worship team to the church video production department, Christ Community Chapel relies on volunteers from the congregation to keep their services running smoothly. As the primary editor and leader of the live video production team, Seng had to teach volunteers to edit in Adobe Premiere Pro and use other video equipment and production technologies as needed. To help ensure their workflow is accessible to volunteer editors, Seng relies on EVO’s suite of workflow tools to simplify the post-production process.

Key among those tools is ShareBrowser, the easy-to-use media asset management software included with every EVO. With ShareBrowser, the entire team can search, preview, tag, comment, and share their entire media library. By using the integrated ShareBrowser panel for Premiere Pro, their editors don’t need to bounce back and forth between programs. The ShareBrowser panel provides direct access to their footage and organizational tools, and is contained within their Premiere Pro workspace for convenient media selection and import.

To keep things tidy, Seng created ShareBrowser bins for each team with an additional bin for general stock footage and commonly-used assets. “Wading through files wastes time,” says Seng. “ShareBrowser helps me narrow down our media library to only share the files my team needs.”