ESPN has promoted Mike Shiffman to Senior Vice President, Production and he will continue to oversee all production aspects of ESPN’s basketball categories, including event and studio for the NBA, WNBA, and men’s and women’s college basketball. Additionally, Brian Lockhart has been promoted to Senior Vice President, ESPN+ Original Content and ESPN Films, overseeing strategy, development, production and integration of all original programming initiatives under the ESPN Films & 30 for 30 umbrella, as well as original series and studio shows on ESPN+. 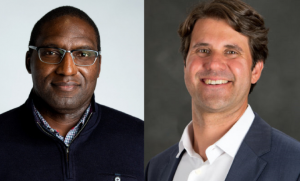 Shiffman began his ESPN career in 2000. Prior to joining the basketball group, he served as Vice President, Content Strategy, SportsCenter and News, and Senior Coordinating Producer of Strategic Content and Coverage. He also had oversight of the Digital Domestic Sports Group, the Universal News Desk, the Assignment Desk, and the Stats and Information group.

“Mike has repeatedly proven to be instrumental in elevating all of our basketball properties in recent years through his vision, creativity and passion,” says Stephanie Druley, Executive Vice President, Event and Studio Production. “He played an integral leadership role in guiding us through the NBA and WNBA Bubbles and continues to drive innovation, including in the ever-changing world of college basketball. We are thrilled for Mike.”

Lockhart joined ESPN in January 2019 as Vice President of ESPN+ Original Content from NFL Media, where he was Vice President and Executive Producer of Original Content. Prior to coming to ESPN, Lockhart, an eight-time Emmy Award-winner, established a reputation as a thoughtful and creative leader and storyteller. During his time at ESPN, his innovative storytelling has enabled our organization to connect with new fans, all while he has led a significant expansion of original series, films, and special projects.

Lockhart has led numerous successful initiatives, including the launch of the Emmy-nominated Peyton’s Places franchise, one of the breakout hits for ESPN+. Lockhart has also guided the expansion of the Detail franchise, as well as the creation of multiple new series including Bettor Days with Mike Greenberg and America’s Caddie with Michael Collins. Additional new series in development and production under his leadership include Man in the Arena: Tom Brady and an extension of the Places franchise that will include David Ortiz, Abby Wambach, Rhonda Rousey, and Eli Manning.

“Brian is a valued senior leader and an award-winning content creator who brings a vast array of experience and energy to our team,” says Burke Magnus, Executive Vice President, Programming and Original Content. “As we continue to develop high-quality narrative sports storytelling across a variety of platforms, Brian’s strategic insight, strong leadership, and ability to deliver creative and compelling content, will be fundamental in exploring how we best bring these stories to life for sports fans.”