The acrobatics and tumbling competition was live-streamed on ESPN+

When CBS and Fox began integrating a new camera angle into its live broadcasts toward the end of last NFL season, it got fans talking. The shallow-depth-of-field look coming from a camera positioned on the sidelines delivered what some called “cinematic” and others deemed “like a videogame.” 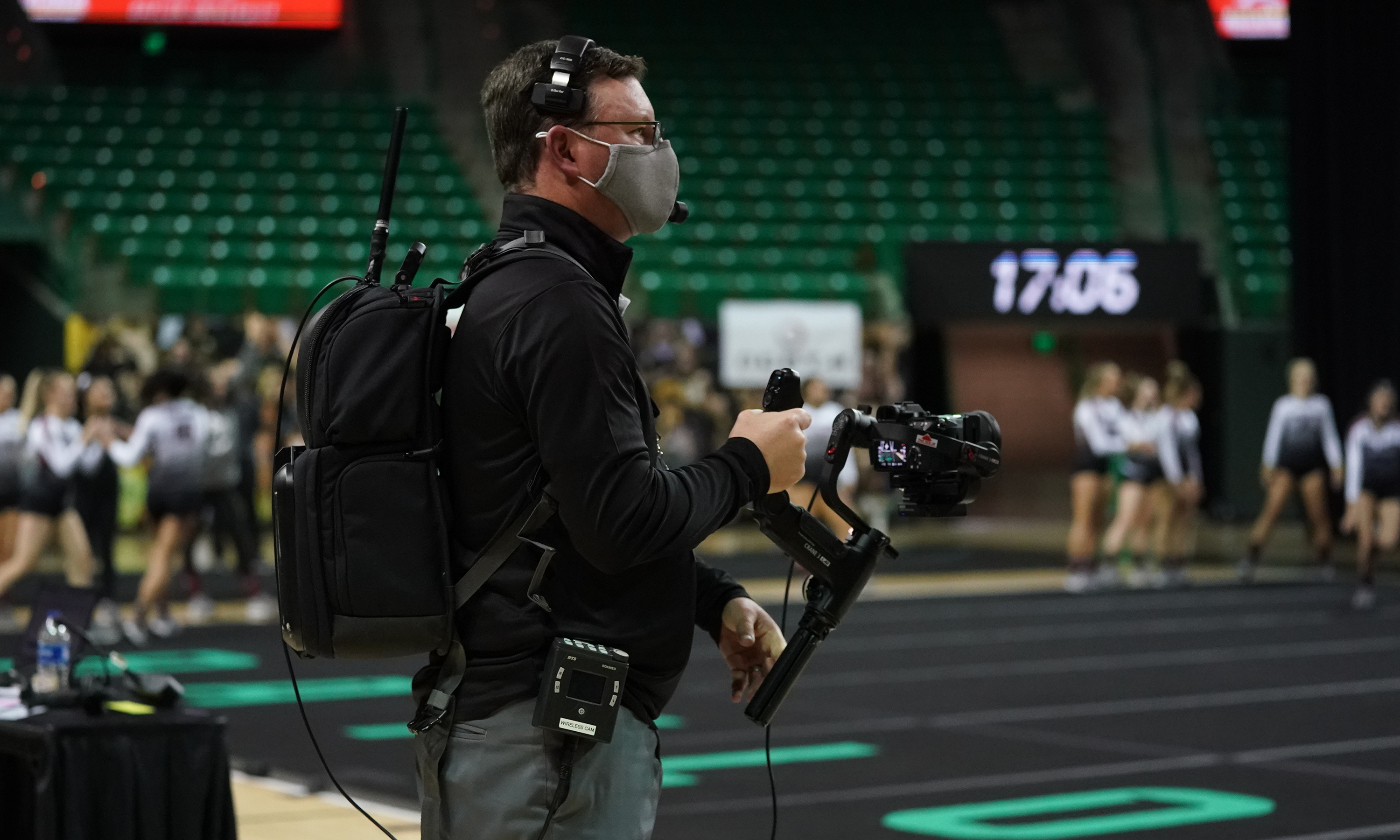 While Twitter buzzed about the new look, live-video producers got their wheels turning. How could they (and should they?) integrate a similar technology into their live productions?

Among those inquiring minds was Davis DeLoach, associate director, BaylorVision, Baylor University Athletics. The intimate angle got him racking his brain for ways to test out his own version of the setup and, more important, seeking an event that would best showcase its capabilities.

For the second time in three years, in April, Baylor hosted the National Collegiate Acrobatics & Tumbling Association National Championship, and, after striking a deal with ESPN (through the university’s Big 12 Now rights agreement), was committed to live-stream the event on ESPN+. It seemed a great fit for the BaylorVision crew to roll out something special for a unique live production.

So what was BaylorVision’s version of the famous “Megalodon” made up of? The school’s rig consisted of a Sony a7R III mirrorless camera outfitted with a Sigma prime lens on a Zhiyun-Tech CRANE 3S handheld stabilizer. That was connected to an RF backpack transmitter. To deliver the signal from the mirrorless camera to BaylorVision’s centralized control room at the Ferrell Center in Waco, TX, DeLoach used an HDMI-to-SDI converter in the backpack. The camera sends HDMI into a Wave Central wireless RF unit with an Anton Bauer battery mount. There is also a D-Tap–to–AC power adapter and an antenna sticking out of the top of the backpack. The signal is delivered to the control room as a live camera source for the front bench to cut to.

The rig, operated by BaylorVision Director Chris Humphreys, delivered to the live broadcast some of the shallow-depth-of-field shots that have been garnering a lot of attention and debate around video circles. Fans at the event offered universal praise, according to DeLoach.

“Everybody loved it,” he says, “We took the TV feed to the videoboard, and everyone was seeing it [there]. The crowd loved those shots.”

The BaylorVision crew deployed the rig again shortly after the NCATA National Championships at the football team’s Spring Game. DeLoach does note that the team is still tweaking one element of the rig: the physical temperature of the unit. The battery and RF units got quite hot during both productions. 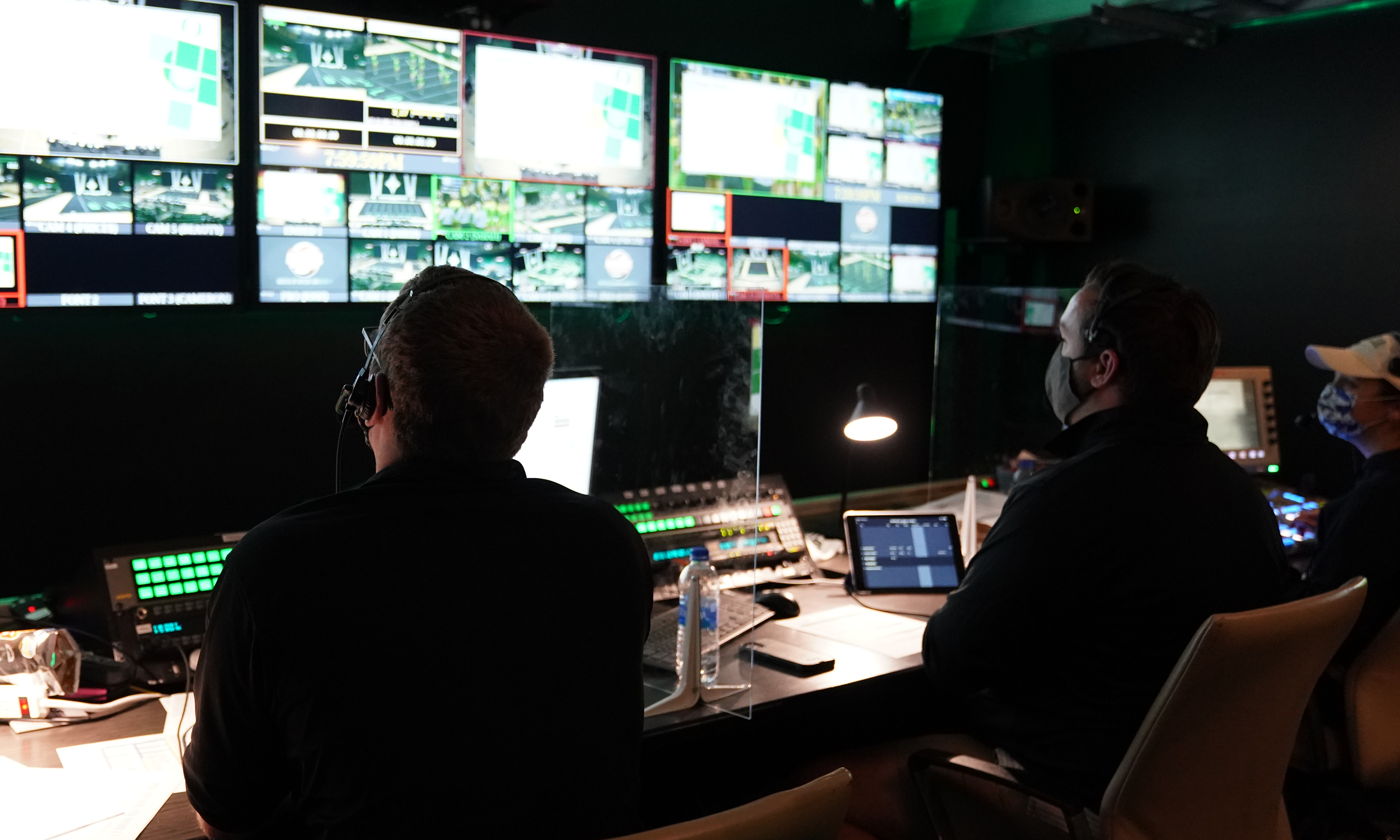 The NCATA National Championship show is a unique one for the BaylorVision crew. A relatively young competition in collegiate athletics (it’s included on the NCAA’s Emerging Sports for Women program), acrobatics and tumbling competitions are not often broadcast live, but the team at BaylorVision embraced the project. In fact, the entire full-time crew worked directly on the production.

Acrobatics and tumbling poses some challenges for a live production. As with gymnastics, live scoring is intricate and dynamic, and its graphical display on-screen is critical to establishing the quality of the broadcast.

The NCATA does not announce official scoring after each group’s routine. Instead, all scores are delivered following each of the six events within the championship. There also isn’t an established official digital scoring system, which means that, when scores came in, they needed to be relayed directly from the scorers table via intercom, typed in manually by the graphics operator, and displayed.

To ensure that the show didn’t miss competitors’ live reactions to the scores, BaylorVision plugged in directly to the feed of the venue’s public-address announcer.