Besides a 25,000-sq.-ft. facility, the broadcaster is building its own video network

Nearly two years after acquiring 21 Fox RSNs from Disney, Sinclair Broadcast Group officially rebranded them Bally Sports earlier this year. While the rebranding project was among the largest undertakings in the history of the RSN business, Sinclair faces an equally daunting task in building the backend technical infrastructure to replace the Fox RSN master-control center at The Woodlands in Houston, which will revert to Disney control on Aug. 23. 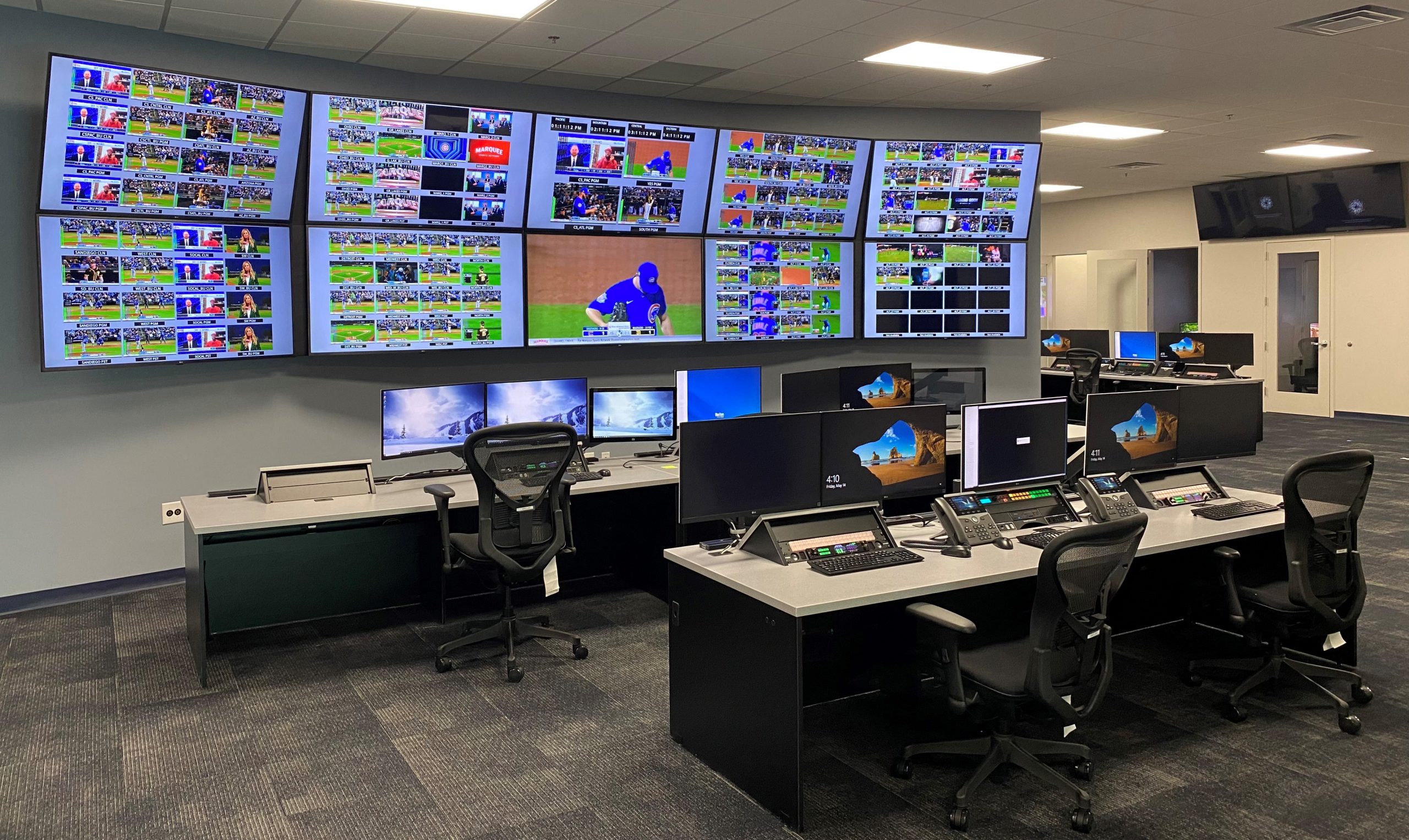 To serve the master-control needs of the 19 Bally Sports RSNs as well as YES Network and Marquee Sports Network, Sinclair has erected a 25,000-sq.-ft. SMPTE ST 2110-based Media Operations Center at Encompass Digital Media’s headquarters in Atlanta. In addition, the broadcaster is in the process of building a Sinclair Video Network (SVN) to replace Fox’s existing VAN (Venue Access Network), which connected all the RSN studios and trucks to venues across the country.

“This has been a huge, unbelievable logistical juggling act — not just building the facility but now bringing all the RSNs online with the new [SVN],” says Don Roberts, VP, sports engineering and production systems, Sinclair Broadcast Group. “And we are on a very tight timeline to get all of this done before the deadline in August. We still have a long way to go, but It’s amazing what this group of people has done in an incredibly short period of time without any real drama or hiccups.” 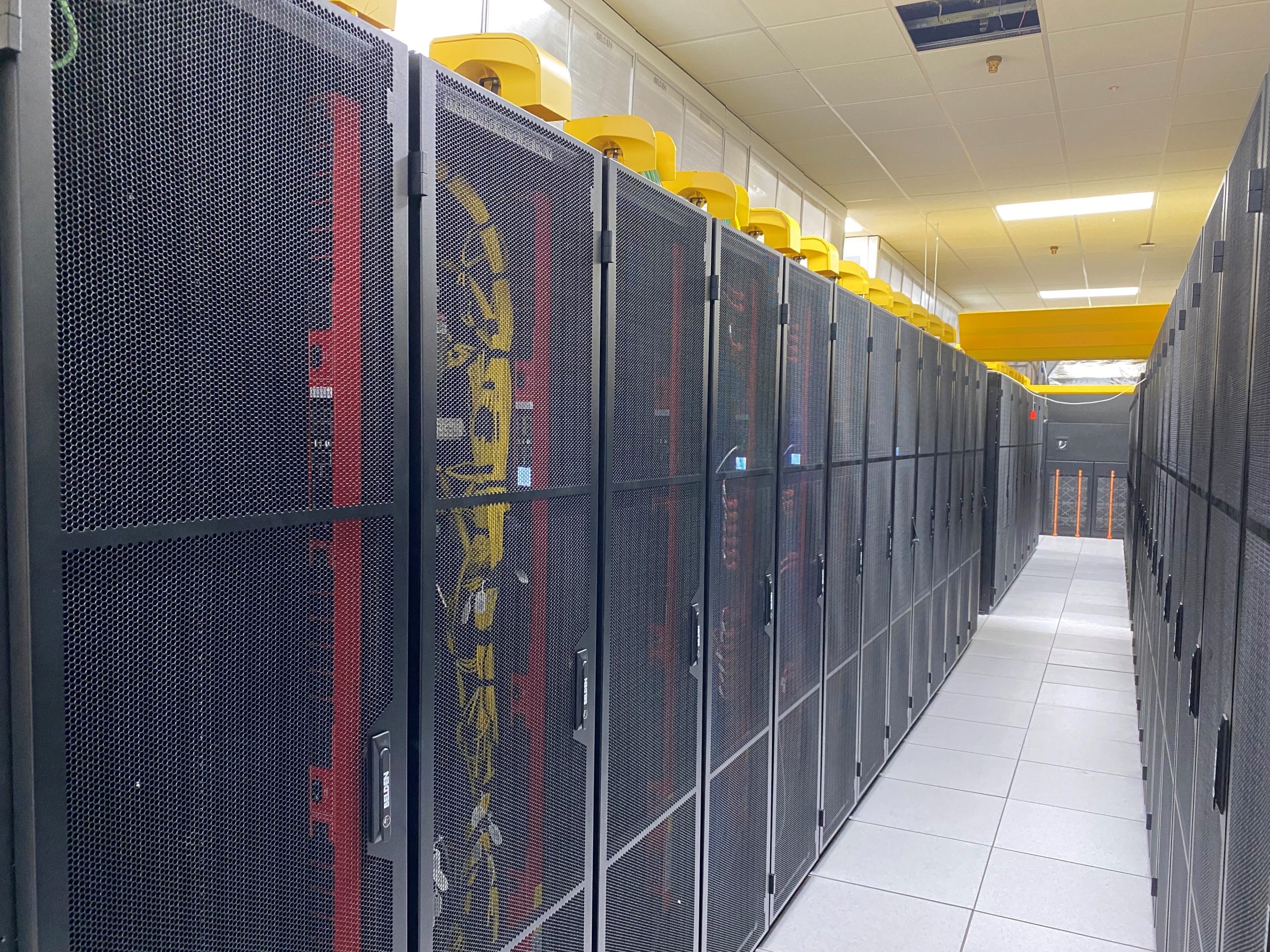 After the deal with Disney was finalized, Roberts and his team took two trips to the Woodlands facility to understand the task of replacing it. At that point, Sinclair began exploring two options: building a facility on its own that could replicate the Woodlands workflows for the RSNs or partnering with another organization to create the facility. Given the ultra-short timeline to launch such a robust facility, Sinclair opted to partner with Encompass to create its new Media Operations Center.

“We had done some work with Encompass in the past,” says Roberts, “and they already have our Marquee Sports Network operation there. So we sat down and spent a lot of time with them planning it out, and it was a very collaborative environment.”

Sinclair came up with a plan to take over the entire underutilized east wing of Encompass’s facility (previously home to Crawford Communications’ Satellite Services Division, which Encompass acquired in 2010), providing a 25,000-sq.-ft. canvas on which to create the new Media Operations Center.

“There was basically nothing there,” says Roberts. “We gutted the building and built out what we needed in terms of power and [infrastructure]. It was as close to being a ground-up buildout as you can get without its actually being a new building.” 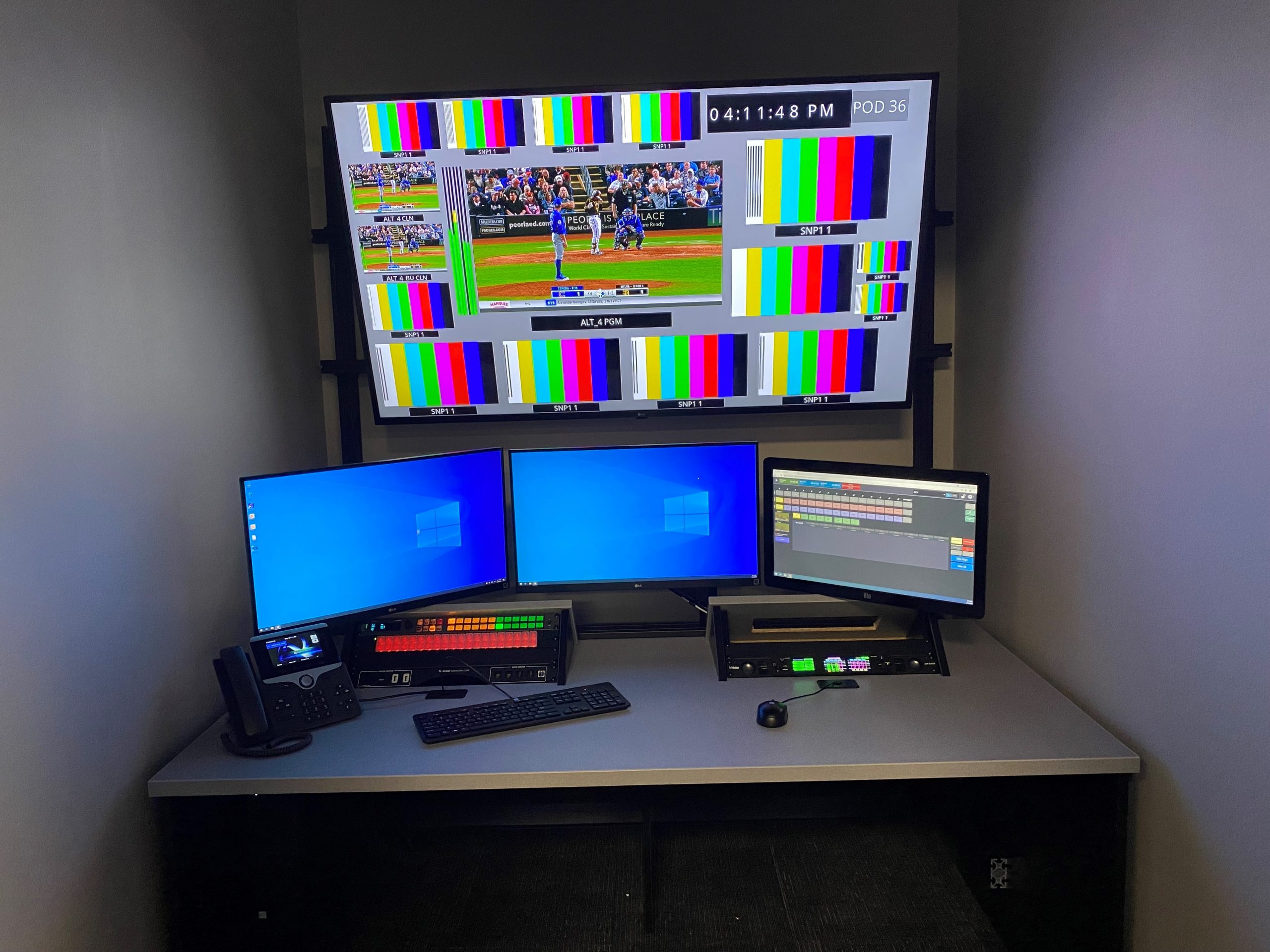 Encompass and Sinclair tapped Diversified to be system integrator and elected to build a native end-to-end SMPTE ST 2110 facility. IP-based facilities were nothing new for Sinclair, which had just rolled out new ST 2110 studios for Tennis Channel, Marquee Sports Network, and Bally Sports Florida/Bally Sports Sun. These projects gave Sinclair the confidence to move forward with a fully IP-based Media Operations Center in Atlanta.

“We certainly could have built an HD-SDI facility,” says Roberts, “but we needed to put an infrastructure in place that would support 1080p, 4K, and HDR someday and also build for growth and for potential cloud environments and playout workflows. It made sense for us to build an IP facility. It has taken longer, and the cost is a little bit more compared with HD-SDI, but it’s not like it was when IP was still a science experiment a few years ago. It has gone very well, and we’re really happy with it.”

The primary operating area within the Media Operations Center is the multichannel monitoring room (Centralcast), where operators monitor the multitude of feeds coming into master control. Around the outside of this Centralcast room are 52 live-event pods (40 fully equipped, with room to expand to 12 more in the future). Supervisors operate from workstations just outside these pods. 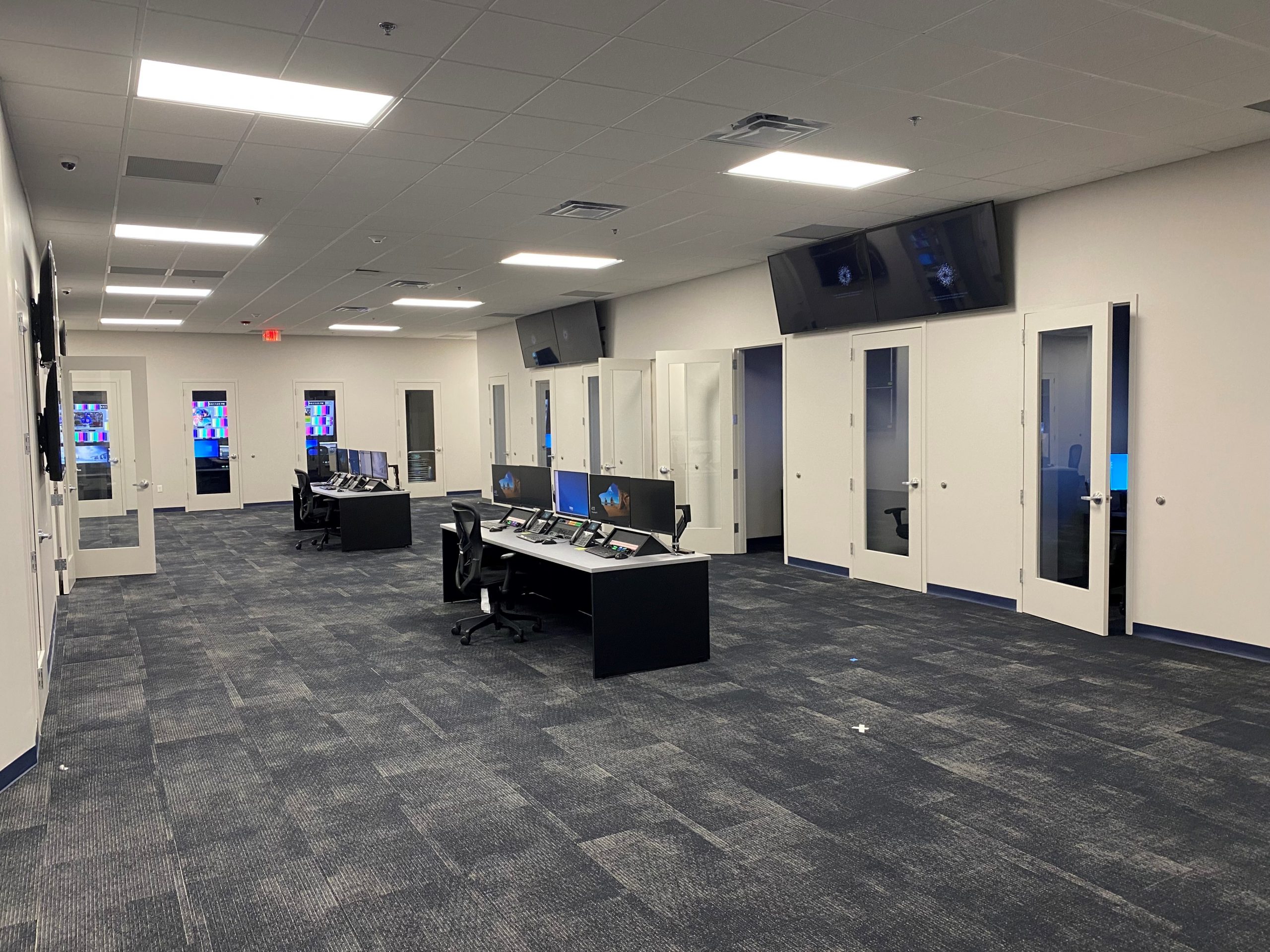 “If the Cincinnati Reds are playing tonight,” says Roberts, “an operator will occupy one of those smaller rooms and actually switch that [RSN’s] feed from there for the duration of the game. When the game is over, that operator goes back out into the main [Centralcast] room.”

Inside the central equipment room are 84 racks of gear (a much smaller footprint than what would have been needed for HD-SDI), including 104 Imagine Versio playout servers (10 UHD) controlled by ADC automation and Imagine Magellan SDNO Orchestration and leveraging an Arista red and blue spine-and-leaf IP network. Nevion’s Virtuoso software-defined media platform manages 71 channels of IP decoding and 24 channels of encoding with Video iPath control. Among other key gear are 52 Imagine Selenio network processors used for multiformat conversion and multiviewers; two fully redundant C-band transmission chains with Synamedia encoders, muxes, and control; Telestream/Tektronix primary PTP sync with Meinberg backup; and Qligent compliance recording.

“We went with a lot of Imagine products that Sinclair has worked with before and are proven for us,” says Roberts. “And Diversified built Tennis Channel, so we know them well. At this point, we know how IP works, and we’re pretty comfortable with it.”

Transitioning from the VAN to the SVN 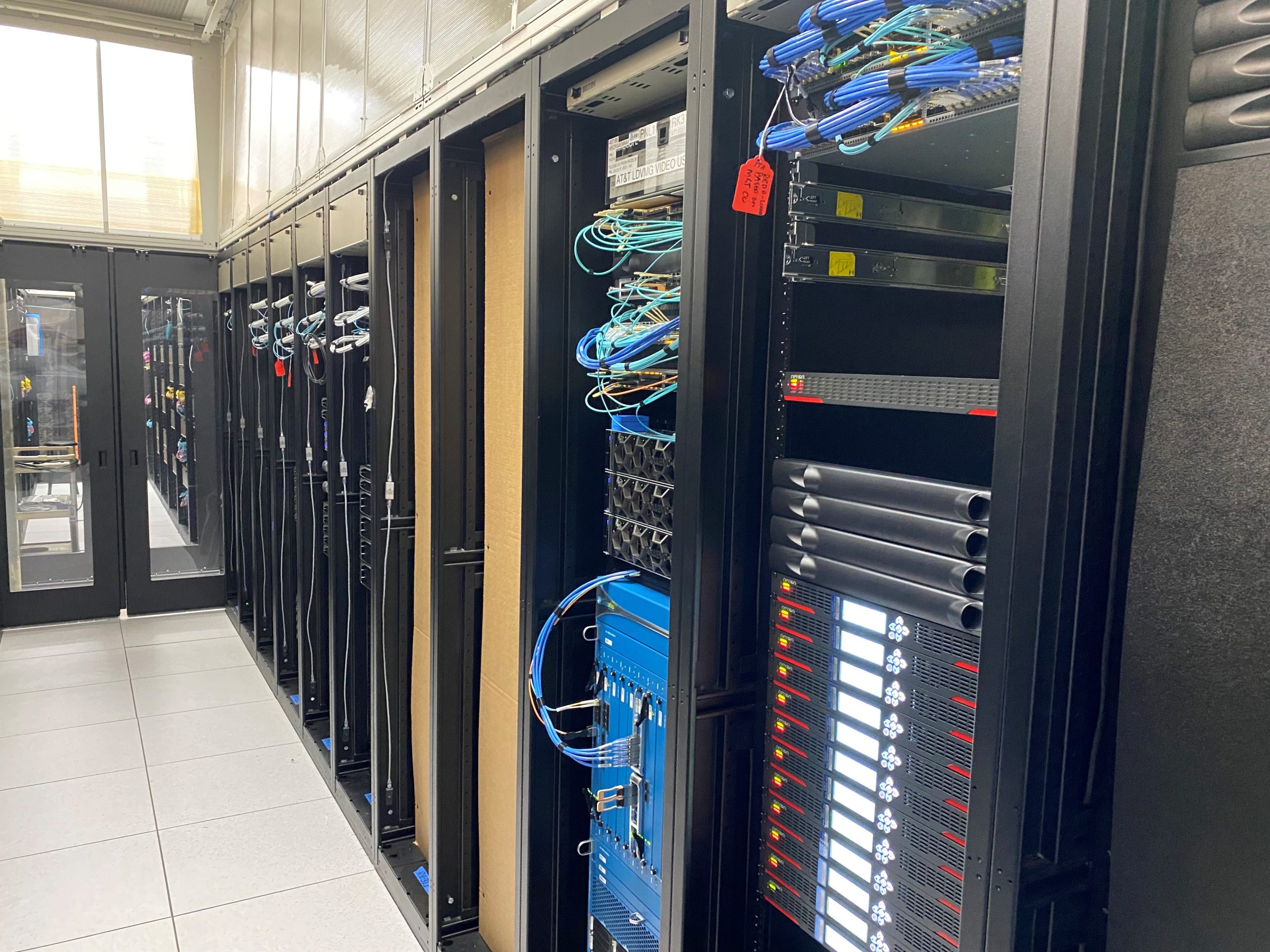 Sinclair is creating its own Sinclair Video Network to connect RSNs and venues around the country.

Although the Media Operations Center went live in time for the Bally Sports rebrand at the end of March, Roberts and company still have a long way to go to complete the transition from Woodlands to Encompass by August.

Currently, all Sinclair RSNs are interconnected and connected to their teams’ respective venues via the existing VAN (Venue Access Network) that Sinclair inherited from Fox Sports Regional Networks (with the exception of Marquee Sports Networks, which was already set up at Encompass). Sinclair partnered with AT&T Global Video Services to build a replacement for the VAN, dubbed the Sinclair Video Network (SVN). AT&T’s GVS network is already connected to the majority of the venues related to Sinclair, and Sinclair is currently working with AT&T to deliver connectivity for all the RSN studios and trucks on the GVS network.

“As we were building this facility,” says Roberts, “we also had to build our own version of the VAN. It’s odd to say, but the facility part is actually the most straightforward part of it logistically, compared with creating an entirely new video network.” 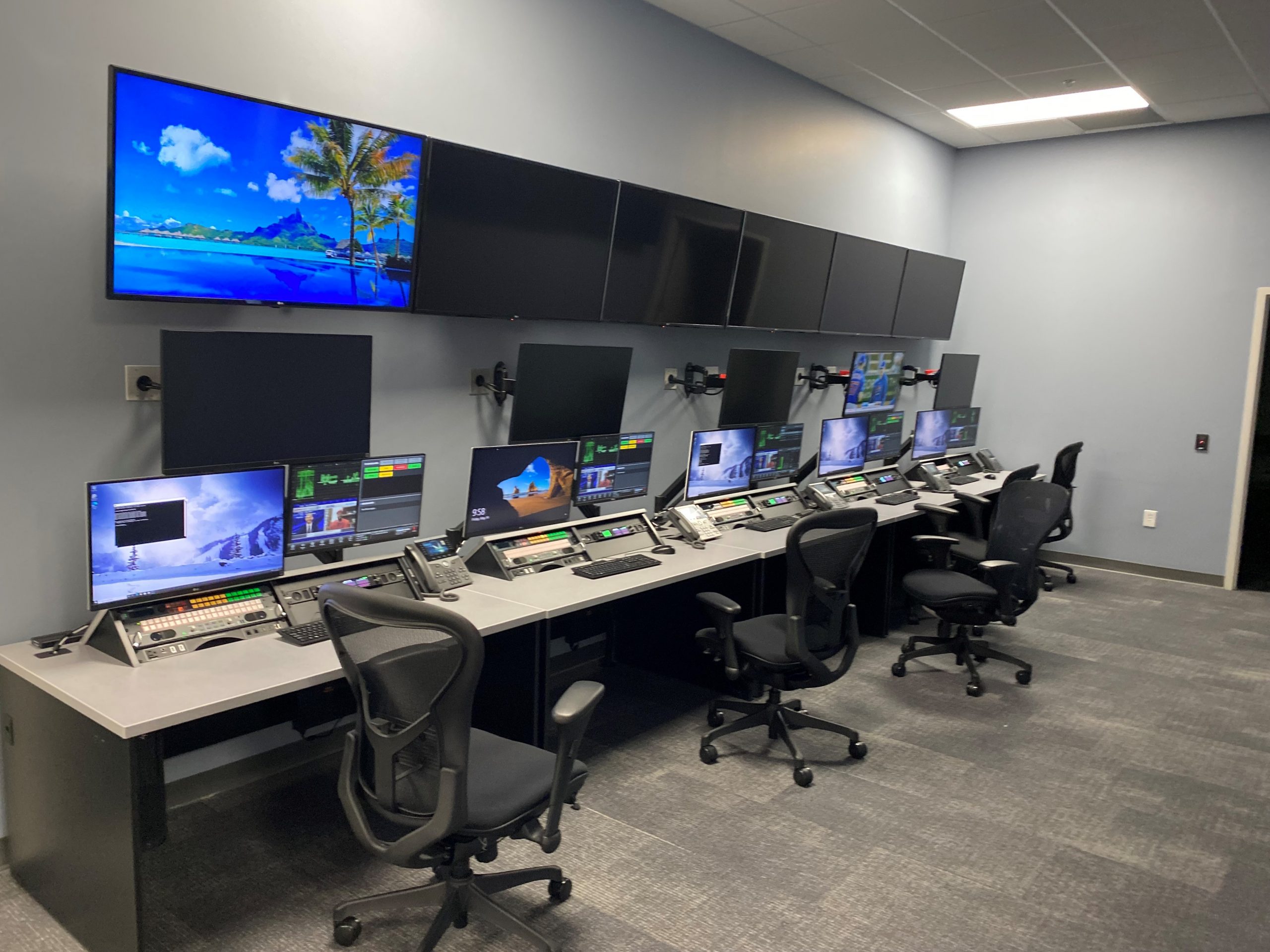 Inbound feeds are monitored in the Technical Operations Center.

Sinclair is currently working with Mobile TV Group, which provides mobile facilities for all Bally Sports networks, to reconfigure every truck and flypack for the SVN and remove it from the VAN. Once a truck is converted to the SVN, it can’t go back to VAN, which creates scheduling complexities for MTVG (for example, if a truck is now on the SVN, it can’t be sent to a venue that’s still on the VAN). As a result, Sinclair and MTVG are sending out flypacks to RSNs during the three- to four-day reconfiguration process and to accommodate any SVN/VAN conflicts. 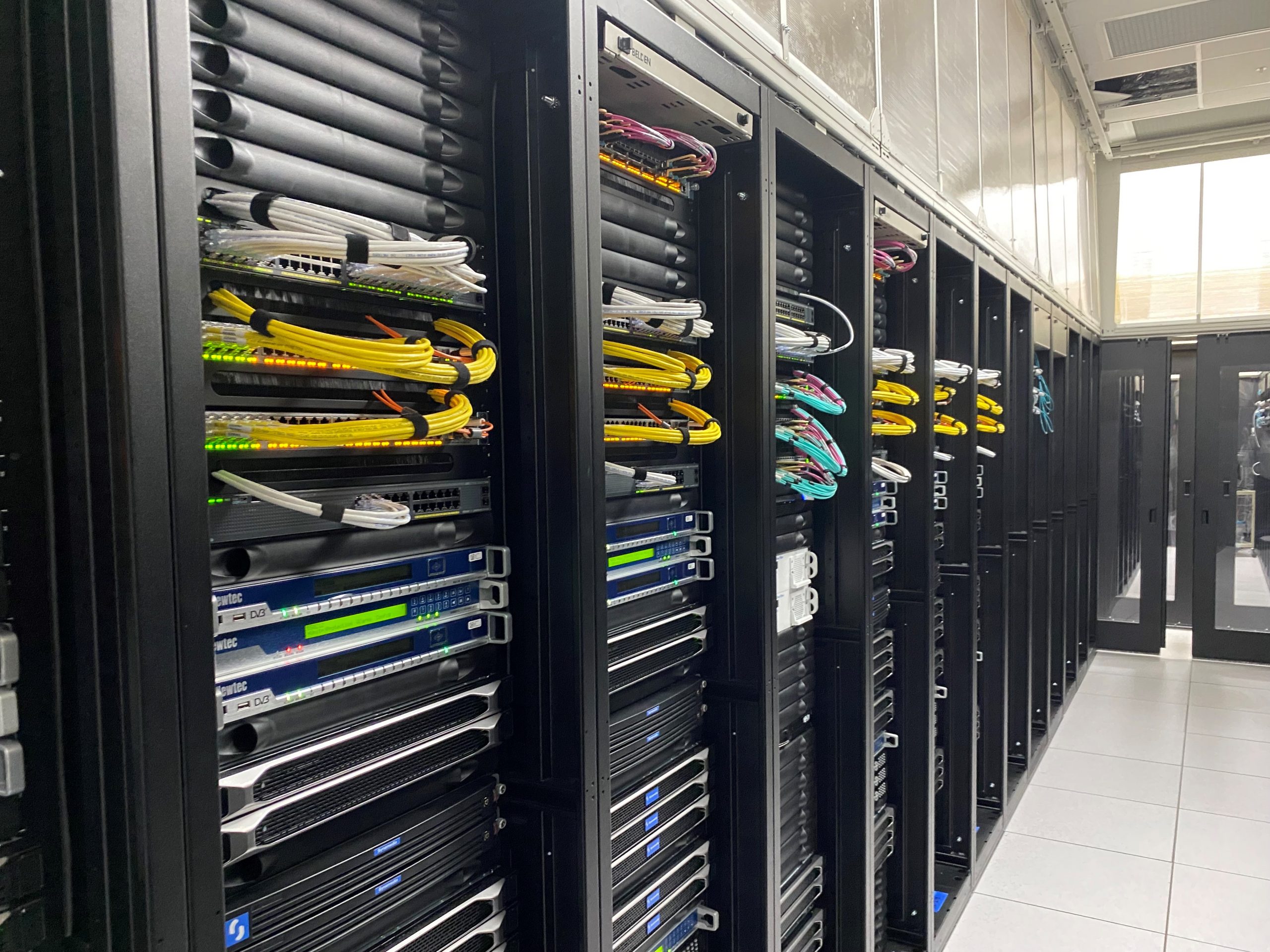 “There’s a back-and-forth process that will happen as we’re making the transition, because some trucks and regions will be converted to the SVN but we still need to feed them to the Woodlands,” says Roberts. “Also, we need to get the feeds from the VAN trucks and regions that haven’t been converted yet from the Woodlands to Encompass. At the same time, we’re doing this truck reconfiguration, we’re also starting shadow operations at Encompass so we need all the signals there. That’s an ongoing adventure for us.”

In addition to building out the SVN, Sinclair was required to distribute 3,500 new Synamedia satellite receivers/decoders to accommodate the FCC-mandated satellite repack of the C-band spectrum and to transition its satellite operations from a MPEG2 to HEVC.

“There’s layer upon layer [in this project], and they all interact with each other,” says. Roberts. “This is all going on at once.”

…And Doing It All During a Pandemic 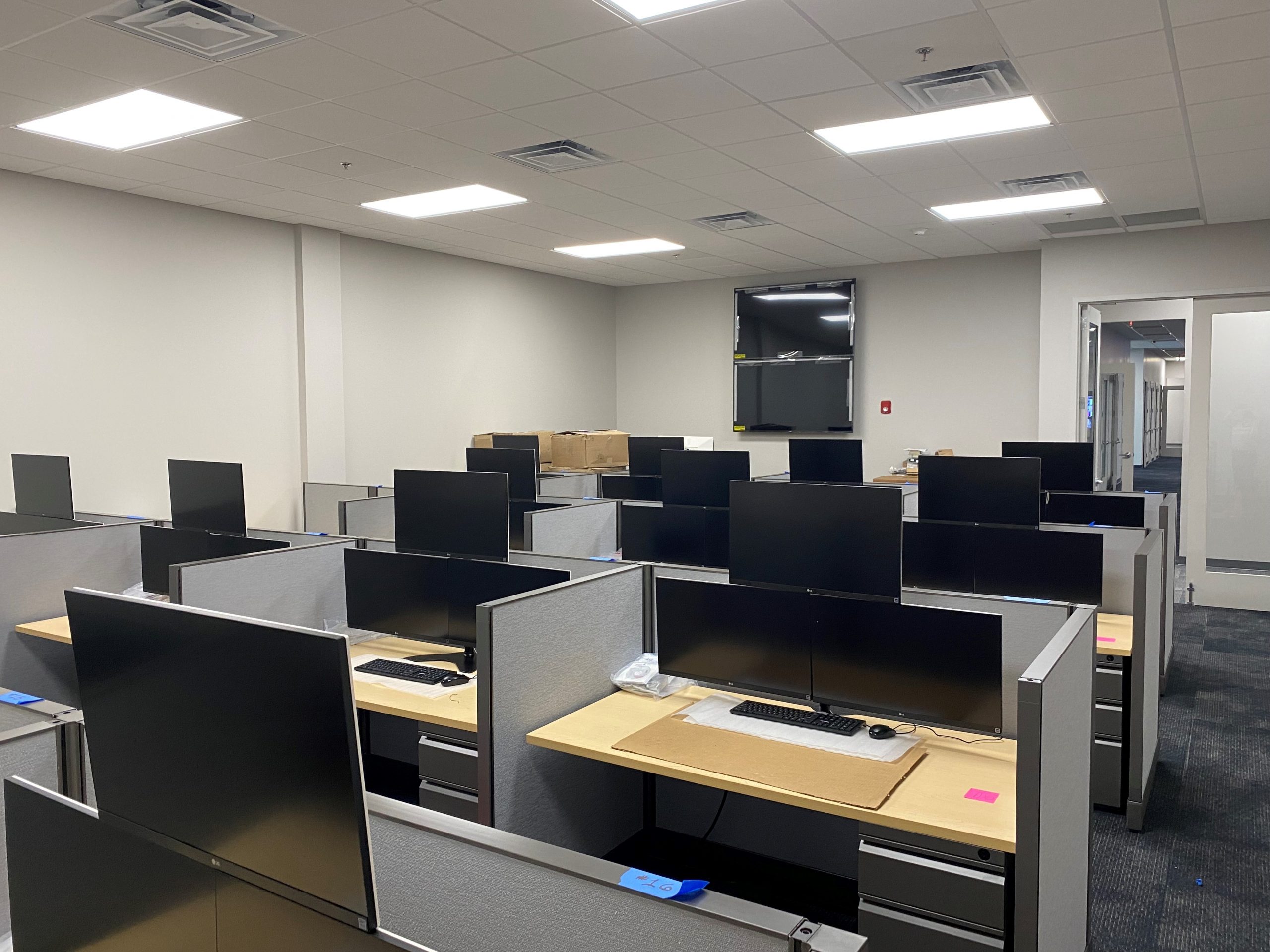 Virtual graphics are inserted into the RSN game broadcasts out of Atlanta.

The logistical challenges of transitioning 19 Bally Sports RSNs, YES Network, and Marquee Sports Network to a new Media Operations Center in a matter of months would be a complex process under normal circumstances. But conducting this multi-network, multi-venue transformation across the country during a pandemic has been among the most challenging missions of Roberts’s more than two decades in broadcasting.

“In the years I’ve been doing this,” he says, “I’ve never seen anything like [the working dynamic] created by COVID. Between us and Encompass and Diversified, I have never worked with a group of people that are this connected despite being physically disconnected. Everybody’s hitting on all cylinders all of the time. and it could not have gone smoother than it has so far. There will be issues like there always is, but we will get through them. I could not be more proud of the people that are working on this team.”