Since fall 2019, MSG Networks has kept steady pressure on the gas pedal, with constant action in the New York/New Jersey metropolitan area. With two of its five teams — the NHL’s Islanders and the NBA’s Knicks — in postseason play, MSG Network aims to cover the franchises’ runs with multiple hours of studio programming and live coverage in a workflow linking its Midtown Manhattan facility to the teams’ home venues or to other RSNs across the country.

“It has been really intense for everybody since we’ve all basically been going since September 2019,” says Jeff Filippi, SVP, programming and production/executive producer, MSG Networks. “We’ve reinvented and accomplished a lot with other regional sports networks, and we’re all going to look back years from now at this time and realize how much we pulled off.” 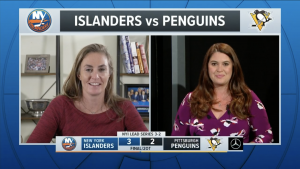 Perennial contender Islanders were expected to make it to the postseason after a stellar showing in last year’s NHL bubble. The Eastern Conference runner-up has fans throughout the city and the tri-state area, and, because of that, MSG is offering ample studio and live coverage during its attempt to lift Lord Stanley’s Cup.

During Game 1 of the Opening Round against the Pittsburgh Penguins, the Isles played game-on in Western Pennsylvania and forced the network to rely on remote workflows through its RSN counterpart, AT&T SportsNet Pittsburgh. The production calls for a clean feed of cameras controlled by the crew in Pittsburgh, one camera dedicated to MSG’s telecast, and sponsored material and other graphics implemented from MSG’s control room in New York. The Islanders’ on-air team takes over the studio to call the game remotely.

“[Play-by-play announcer] Brendan Burke and [analyst] Butch Goring call the game over a monitor while [host] Shannon Hogan comes from our studio and [studio analyst] AJ Mleczko reports from the studio or, through vMix, from her home in Massachusetts,” says Filippi. “The production unit that handles the game is doing our half-hour pregame, then transitions to live game coverage, and then to an extended postgame show.” 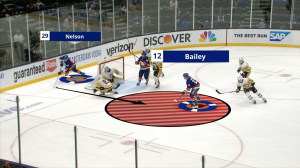 With the positive trajectory of the pandemic, productions are returning to traditional ways for games that take place at the Barn on Long Island. During the playoffs, the entire crew is onsite except for the team that handles the shows airing before, during, and after the contest. At Nassau Coliseum, the crew runs with its normal complement of cameras; elsewhere, the production staff works in its customary onsite truck provided by Game Creek Video. With social distancing still in effect, crew members are occupying additional space in a separate B unit.

“The home games are reasonably straightforward,” notes Filippi. “[Having] fans back in the building [has] really transformed [our broadcasts] compared to the way the season started with dark, quiet arenas with artificial noise.”

Knicks’ Playoffs Return Gets Courtside Reporter at Home, World Feed for Away Games

The Knicks’ first home playoff game since 2013 was attended by 15,000 screaming fans — one of the largest indoor events to take place since the beginning of the pandemic in March 2020. To capture the atmosphere and energy from every angle, MSG Network is deploying its onsite reporter at a lower vantage point than during the regular season. 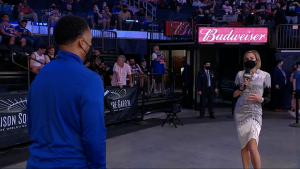 “[Play-by-play announcer] Mike Breen and [analyst] Walt Frazier are there, but they’re back near the first level to follow NBA protocols,” says Filippi. “[Reporter] Rebecca Haarlow has been in the building all year as well, but now she’s allowed to be much closer to the floor. It looks a lot like the bubble days in Orlando: the reporter is socially distant from the player or the coach and has a mask on and can do an interview on the court.”

The away-game setup is very similar to NHL productions of the Islanders. The major difference is the NBA’s HSAN (high-speed arena network) workflow, which taps facilities in the heart of each team’s venue for quick retrieval of camera feeds. Whereas Islanders game get a single dedicated camera, coverage of the Knicks has two dedicated cameras.

Back on 32nd Street and 7th Avenue, the on-air team of studio host Bill Pidto and studio analysts Wally Szczerbiak, Monica McNutt, and Alan Hahn produce surrounding coverage for both home and away games back in the studio.

Despite the daunting task of balancing live coverage of two playoff teams, this process has become customary for the folks at MSG Networks. Earlier this year, Filippi and company juggled concurrent home games not only for the Knicks and Islanders but also for the New York Rangers and New Jersey Devils. With three NHL road games going on at the same time, the staff took over as much real estate at their facility as possible and housed the rest of the production crew in an onsite mobile unit at one of the nearby venues.

“On any given night, there could be away games for the Rangers, Knicks, and Devils,” says Filippi. “[On those nights], we had productions for the Knicks and Rangers out of our 11 Penn Studio and production for the Devils from the Prudential Center. We used the MLB model, where our announcers called the game from the venue with an onsite truck.” 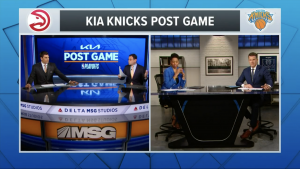 With four on-screen personalities, the Knicks postgame show is using a second studio for social-distancing.

There will be a similar situation tonight with the Islanders hosting the Penguins in a potential series-clinching Game 6 and the Knicks playing Game 2 against the Hawks in Gotham. This will exhaust the network’s home-front efforts with an onsite team at Madison Square Garden and Nassau Coliseum, respectively. If the Penguins spoil the party and extend the series to a winner-take-all Game 7 in Pittsburgh, MSG Network will have to flex its away-game muscles once again when the Knicks travel to Atlanta for Game 3.

The Manhattan facility houses two studios and control rooms, which will be reserved for pregame, intermission/halftime, and postgame shows for Knicks and Islanders and both remote commentary and game production via the world feed for Islanders. To declutter the crowded space, the Knicks will be produced from a mobile unit outside Madison Square Garden across the street. 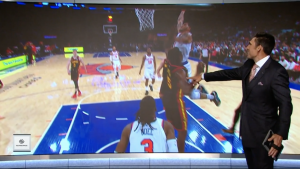 The New York sports scene has been buzzing for quite some time, but, after the Knicks or Islanders either win the championship or head to the offseason after defeat, the MSG Network production team will heave a collective sigh of relief. From a production standpoint, Filippi couldn’t ask for more from his colleagues over this chaotic period.

“I couldn’t be prouder of everybody associated with our network and our telecasts,” he says. “The work, effort, flexibility, and professionalism that they’ve shown has been off the charts.”

When it comes to sports fans in New York and the rest of the nation, the groundwork laid by MSG Networks over the last 1½ years is only an appetizer to the main course that will unfold throughout the rest of 2021.

“This past weekend,” says Filippi, “there was one amazing scene after another that made it feel like sports are finally back: Mickelson’s win at Kiawah Island, 15,000 people standing for two overtimes in Nashville, an amazing scene at the Garden, and the Yankees with a couple of walk-off wins. During regular years, our calendar wouldn’t be too hectic near Memorial Day since we’d only be getting ready for an NHL Eastern Conference Final if a team reached it. Now we have the first rounds of NBA and NHL with two home games and potentially two away games in one week. We’re in a really exciting time.”